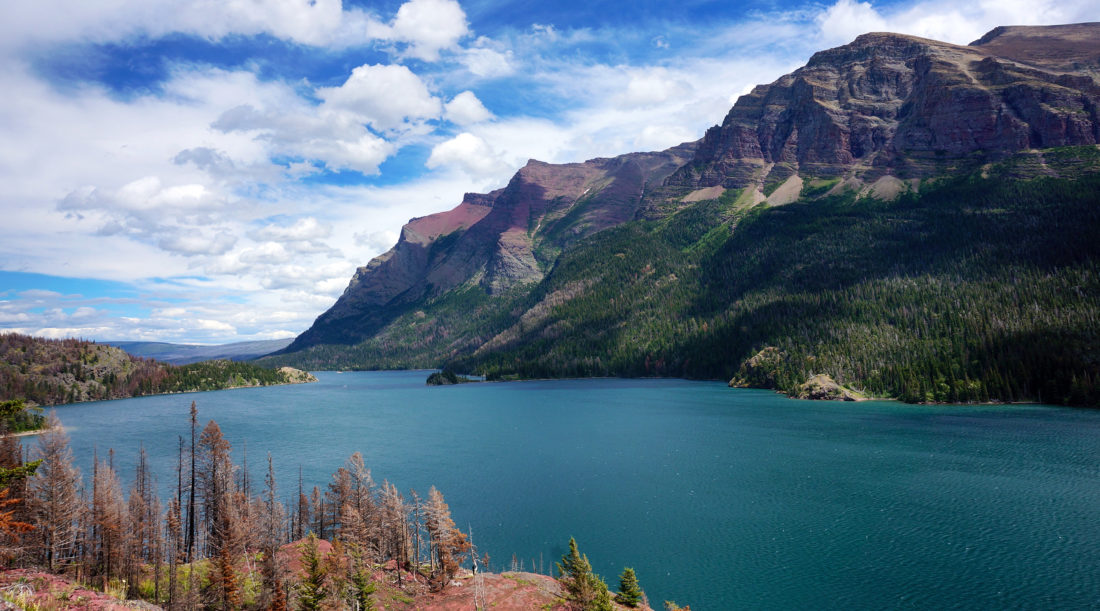 Glacier National Park is the best place in the country.

That is a bold statement, to be sure.  And we can’t deny that the Grand Canyon is vaster, Yellowstone more unique, and the Redwoods more majestic.   However, we accrued a certain level of expertise in our travels around the United States, and we feel confident saying that Glacier beats all of them.  If the national parks are the gems of the United States, Glacier is the crown jewels.

The views were jaw-dropping and the hikes were the best we’ve ever done.  We spent a long time here, and we missed it as soon as we left. 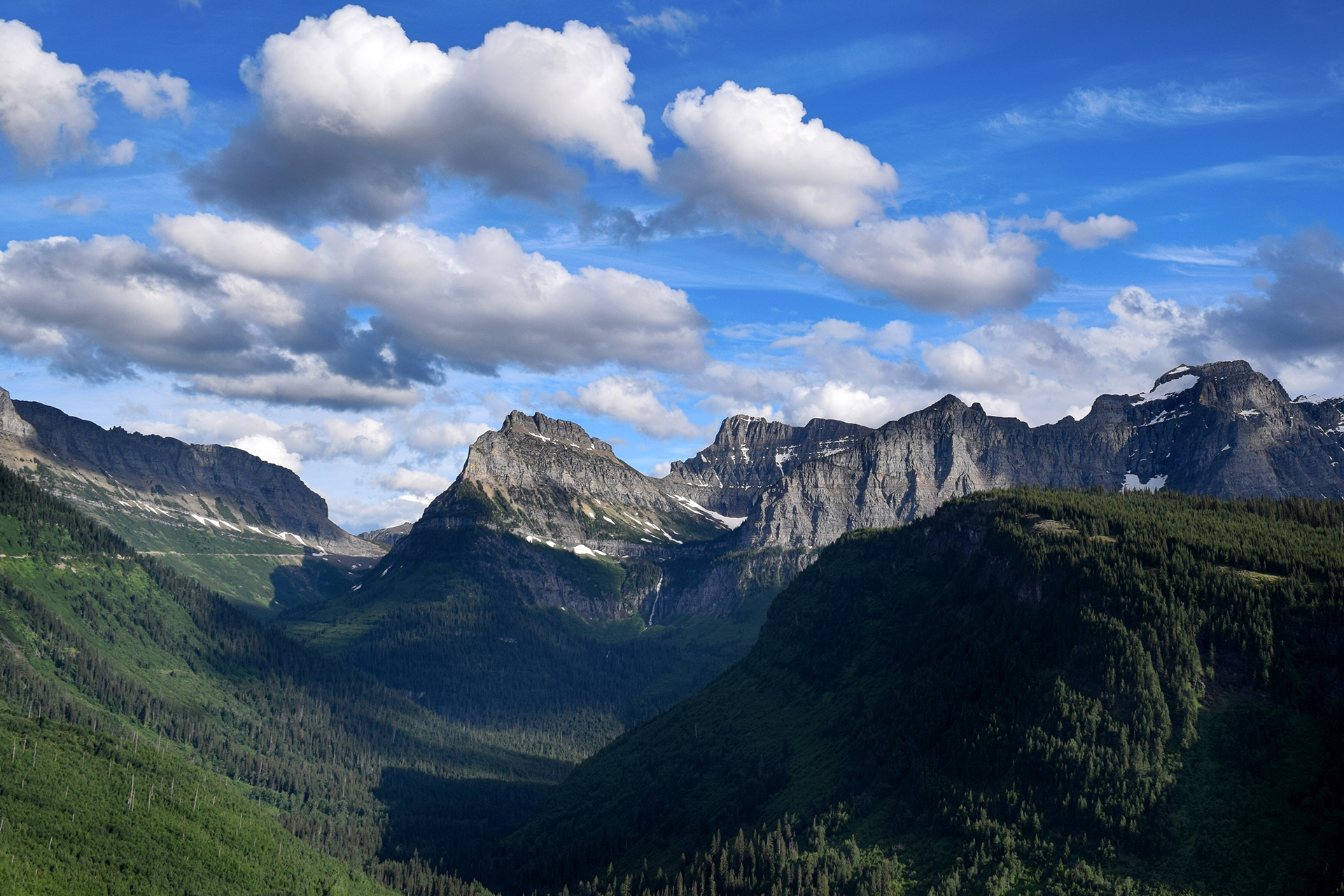 Glacier is in the extreme northwestern corner of Montana, very close to the Canadian border.  It’s not the easiest place to get to. 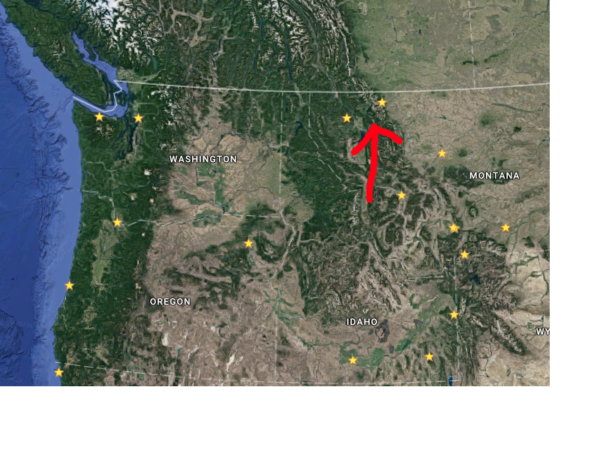 We drove up from near Bozeman, Montana.  It was a long but beautiful drive around pristine Flathead Lake. 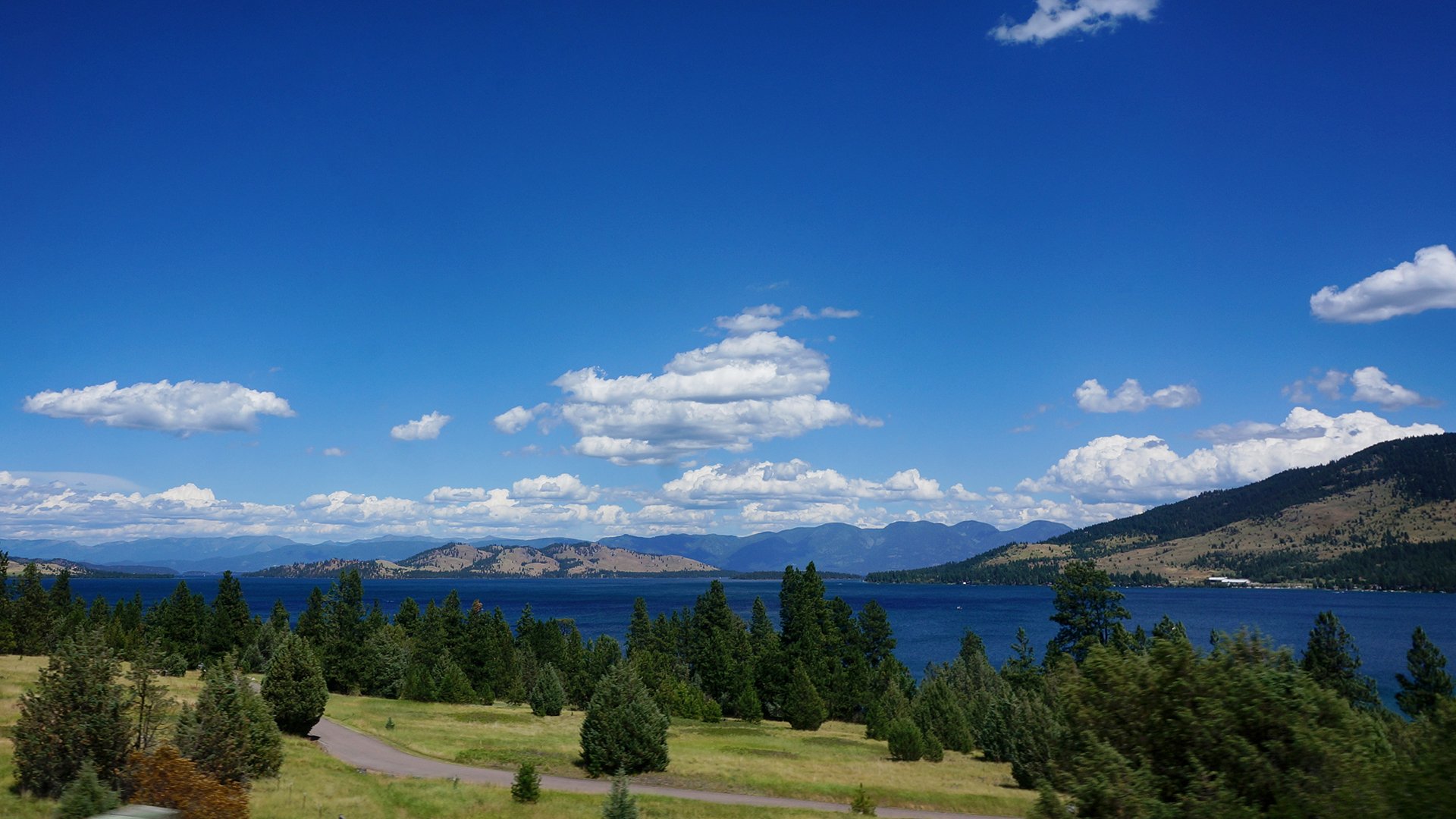 This was a very exciting trip for us because Jake’s family met us there!  Jake’s mom Ginny, his dad Jack, and his sister Kate have all made previous appearances in this space.  This time, we rented a house for a week and had a fantastic (but way too short) time in the outdoorsy perfection that is northwestern Montana. 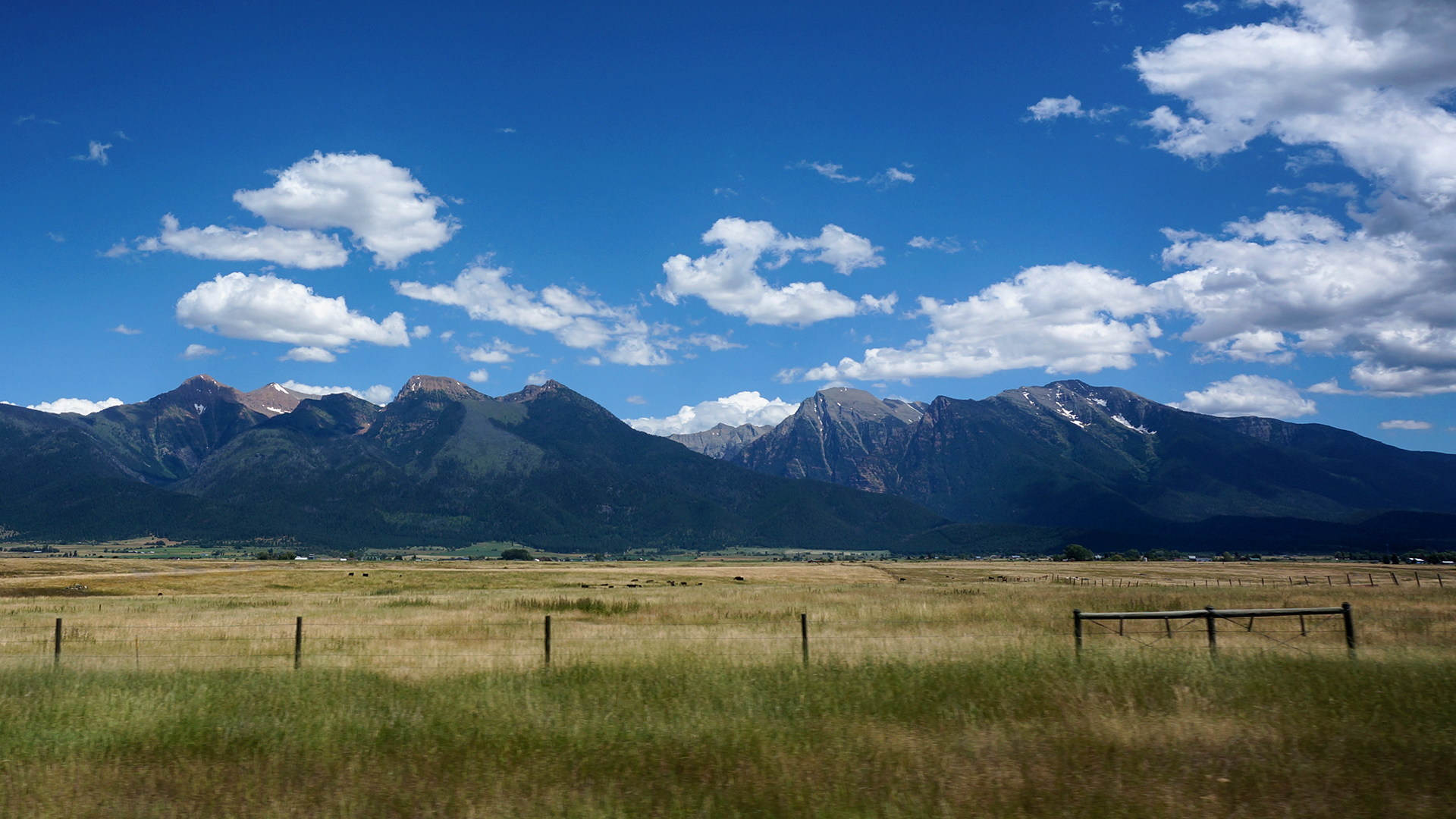 Speaking of outdoorsy, it turned out the house was out in the boonies.  We were a little further away from the entrance to the park than we expected (about 45 minutes), but such is life.  However, Jack, coming in a rented vehicle, did come surprisingly close to dying in the wilderness when Apple Maps sent him down a wrong turn.

He was less than 100 yards from the house when it sent him the wrong way – but a long, long, long way from cell service.

We arrived late in the afternoon, and after some slope-based difficulties turning the RV around (see pic below), we managed to get it parked in the driveway for the duration of our stay.  The owner of our house was a cowboy, as all Montana residents are, and there were quite a few horses staying in the yard right outside.

Heather later discovered that the horses stayed behind the thin, wire fence because it is electrified.  She would prefer that we not mention how she discovered that.

We had been on our road trip for just over a year at this point, and were starting to feel decidedly feral.  Aside from a brief meetup with some folks we met online in Moab, the last time we had seen anyone we knew was in Seattle, two months prior.  A week of actual human contact, plus the magic of long, hot showers and stable WiFi, was just the thing we needed for the home stretch.

The main attraction at Glacier is the road that cuts through it, called Going-to-the-Sun Road.  The name is either based on a Native American legend, or completely made up to sound fancy, because history is whatever you want it to be.  More to the point, the road is freaking amazing. 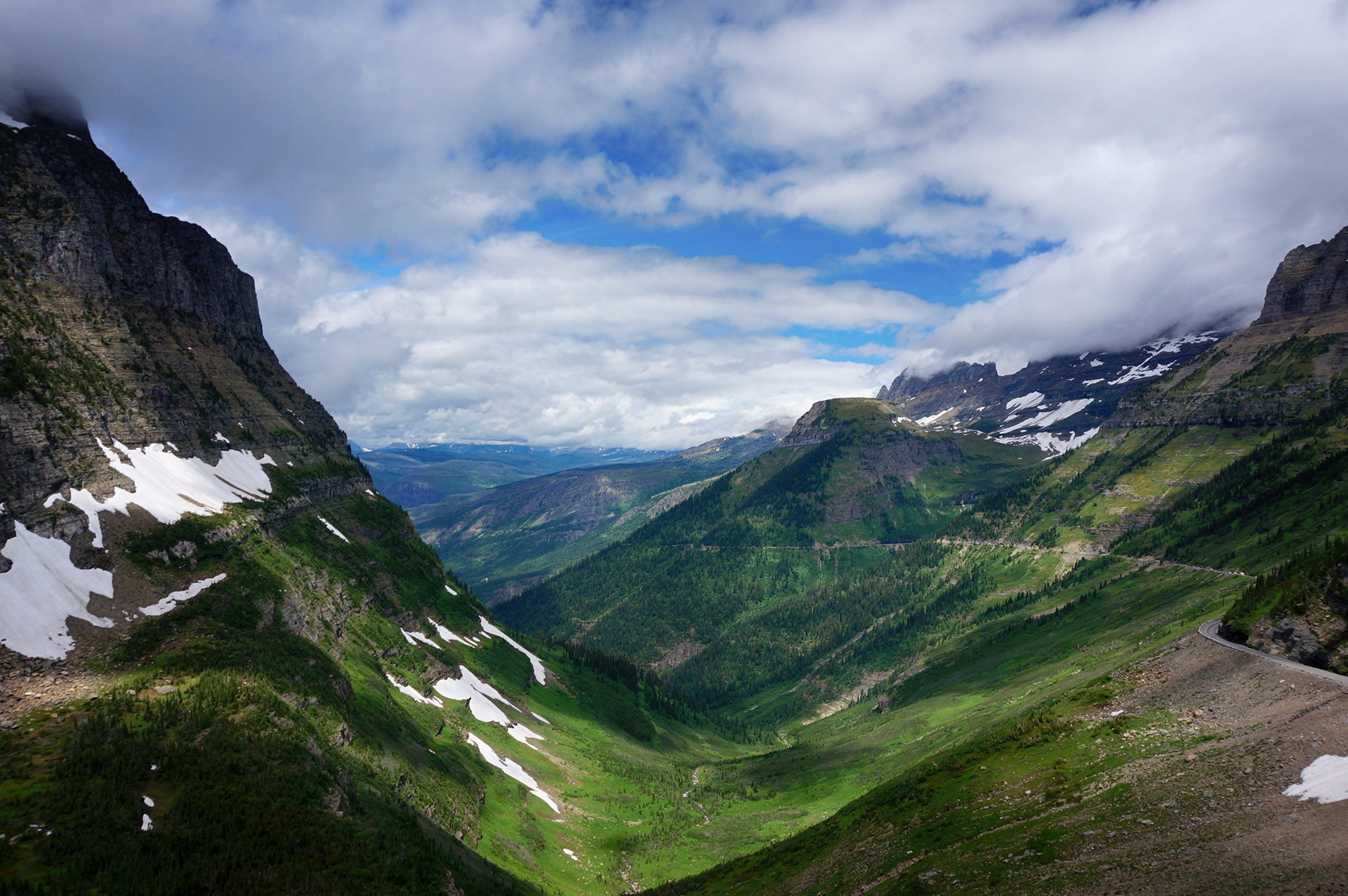 Going-to-the-Sun Road hugs the mountain on an incredibly long, curving climb that offers spectacular views.  (You can view Google’s satellite render here.)  The mountains here are jagged and indescribably beautiful, banded with bright colors and painted with forest and snow.

On top of everything else, July is the height of spring in Glacier, and there were millions of wildflowers. Snowfall melting up above created delicate waterfalls everywhere we went. 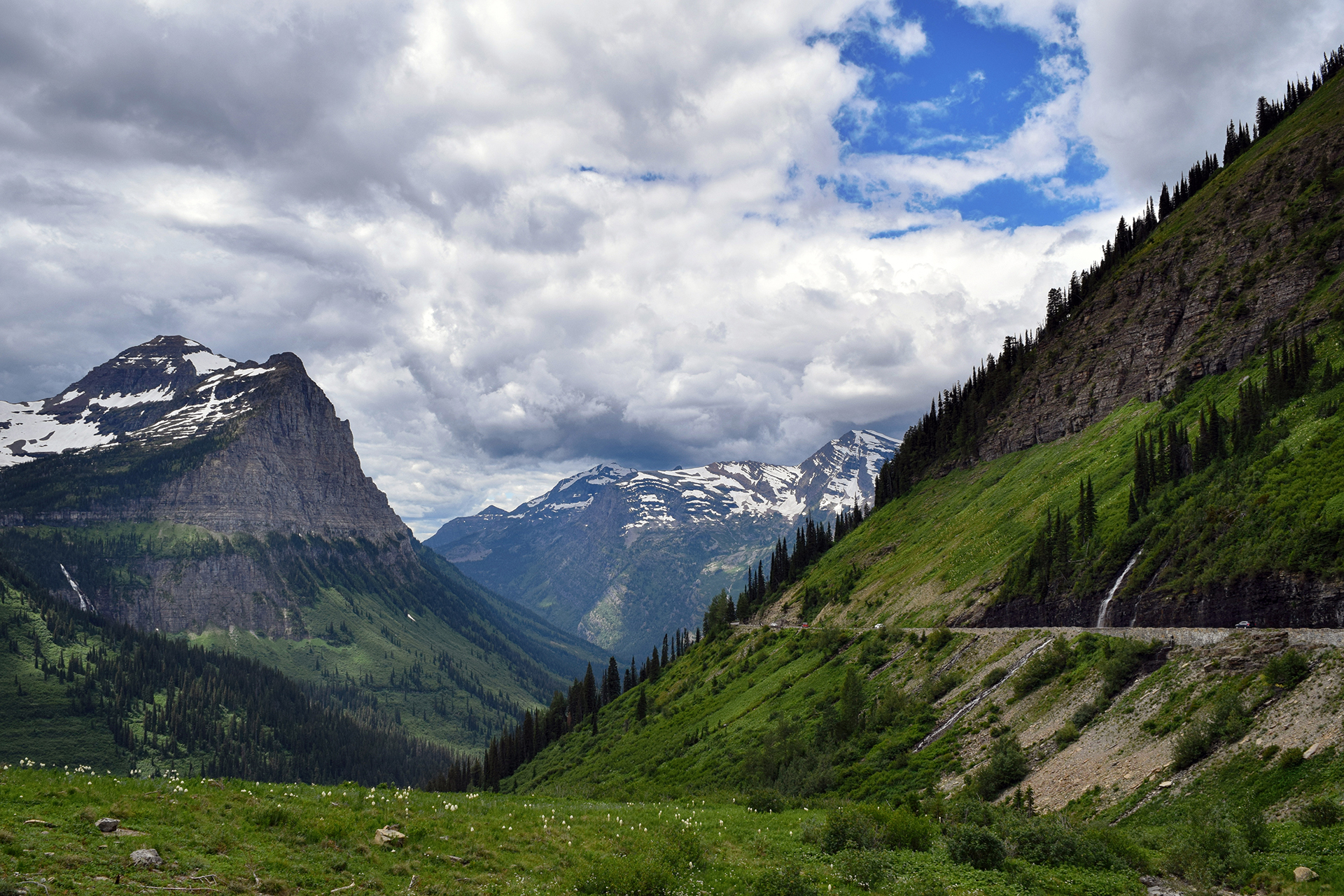 This far north, summer comes slowly, like at North Cascades.  Parts of Going-to-the-Sun road receive an accumulation of more than 100 feet of snow per year, which is then painstakingly removed each Spring by road crews using avalanche spotters on skis.  It takes months; the road doesn’t usually open until mid-June.

You may also have noticed our picture of the red “Jammer” cars that give tours along the road.  We didn’t take a Jammer, but we were happy to use the shuttle after driving the road once.  It’s not the scariest drive we’ve ever done, but it’s hard not to notice that you’re driving next to a sheer cliff with only a small retaining wall.  In fact, due to hairpin turns, vehicles over 21 feet in length or 10 feet in width are prohibited (but we watched someone try in an RV anyway!)  See here for more on the road, an engineering marvel.

In addition to the mountains, Glacier is known for the beauty of its lakes.  We are happy to confirm that beauty.  Lake Macdonald was huge, pristine, and utterly clear, showcasing the colorful rocks that can be found throughout Glacier. 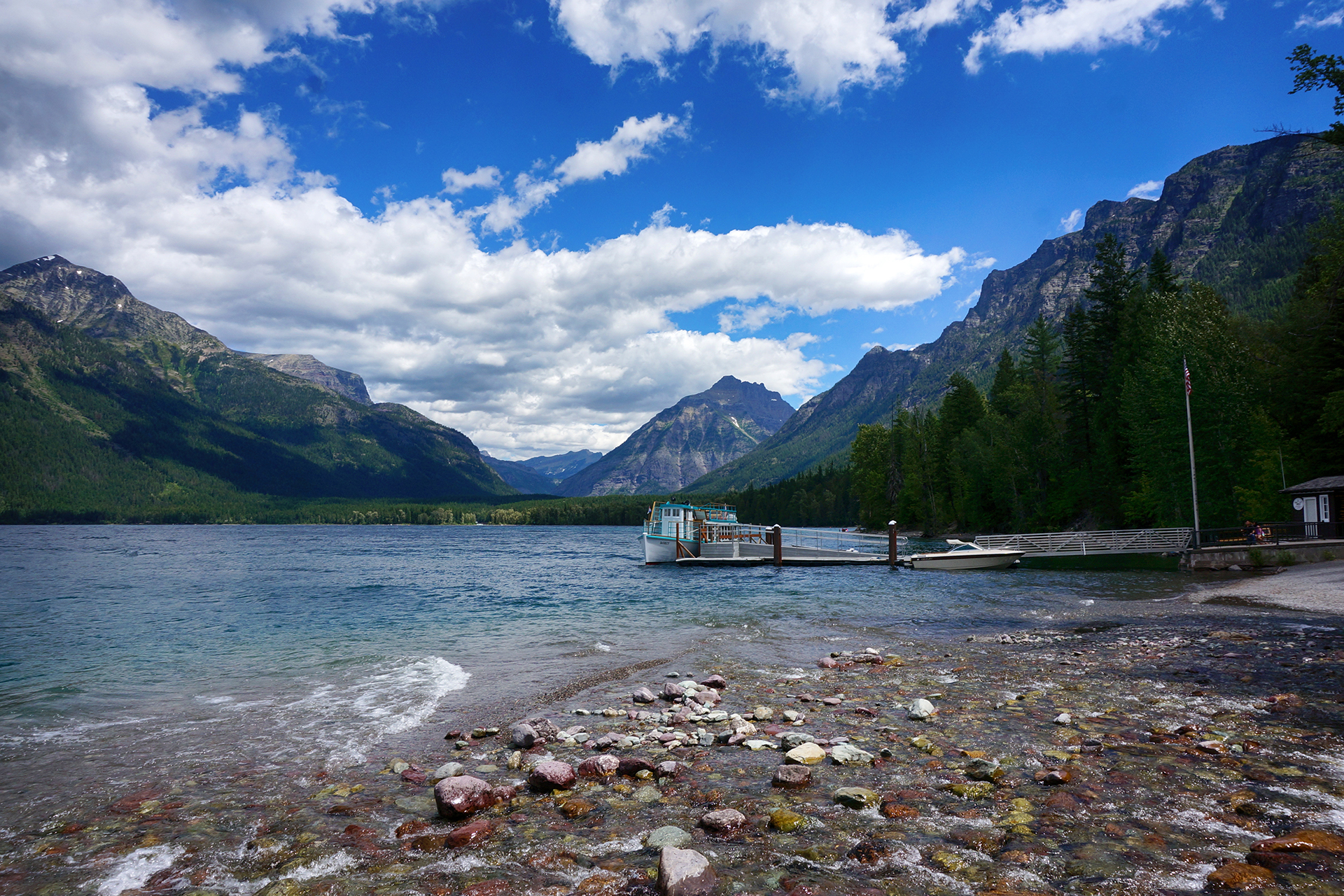 We were amazed by the perfect reflections off the water.  Nearby was  one of Glacier’s many lodges, which are in the Swiss chalet style and all exceedingly charming.

Even the boat at the end of the dock was scenic.

Jake also had some fun when we stumbled upon someone piloting a surprisingly realistic looking RC boat.  Look at how big those mountains must be! 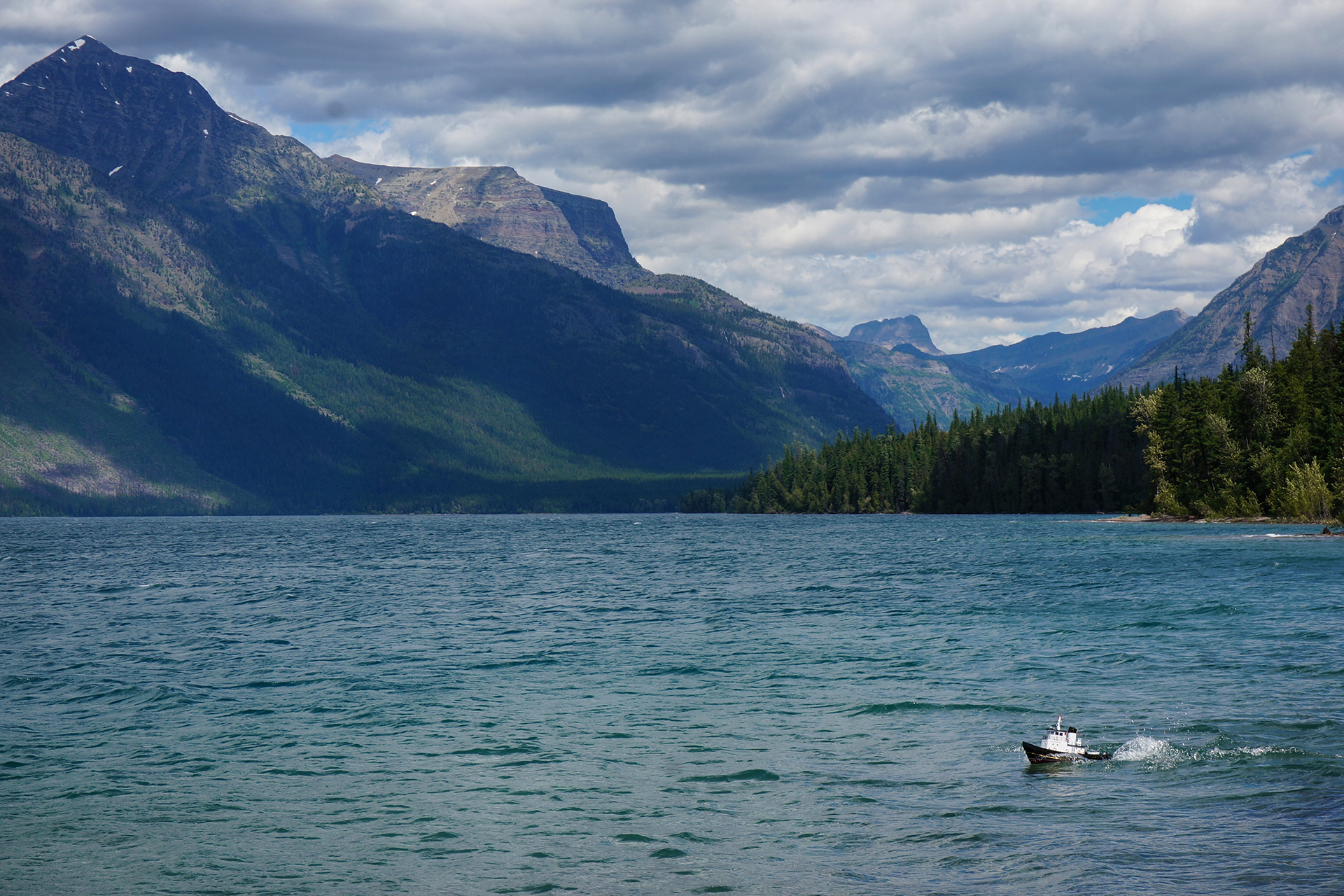 On the other side of Going-to-the-Sun Road is St. Mary’s Lake, where we took a boat ride and ranger-guided tour.  The mountains above are a vibrant red, while the water is tinted brilliantly blue by “rock flour,” tiny bits of suspended particles ground down by the glaciers above.  Even the waterfall flowing into the lake had a blue tint!

We hiked around one side of the lake, and at first, we were bummed that the “forest” we were walking through was really the charred remains of a recent forest fire.  Interestingly, though, this meant that were an incredible number of wildflowers, because light could now reach down to the forest floor.

Later, we hiked through a spooky, 500-year-old forest to Avalanche Lake, where numerous glacier-fed waterfalls cascade down to the waters below.

Sadly, due to global warming, the park’s glaciers may be gone in as little as ten years.  If you or someone you know denies that climate change is happening… just visit Glacier.

Better hurry, by the way:  “In 1850, at the end of the Little Ice Age, there were an estimated 150 glaciers in the area that is now Glacier National Park. By 1968, these had been reduced to around 50. Today the number of glaciers in the park is 25, many of which are mere remnants of what they once were. Rapid retreat of mountain glaciers is not just happening in the park, but is occurring worldwide. If the current rate of warming persists, scientists predict the glaciers in Glacier National Park will be completely gone by the year 2030, if not earlier.”

We did our part to preserve the view.  We took an insane number of photos at Glacier, over 3,600, and we can say without conceit that most of them are amazing. Close your eyes and snap a photo, and the results were usually good enough to frame.

Heather had a very painful job choosing the pictures for this post.   We couldn’t squeeze it all into one post, but we’ll be back soon with the rest.  They’re even better!

Room with a View

Incidentally, we planned on taking a horse-riding expedition with our cowboy/AirBnb host, but unfortunately were rained out.  Instead, we took a gondola ride up nearby Whitefish mountain, where we gawked at mountain bikers speeding down the slopes and watched the impending storm slowly roll in.

We weren’t too sure what to do once we got to the (very chilly) summit, but it turned out there was a ski lodge there!  We stopped in for some quick refreshments, because when the opportunity arises to have a beer at the top of a mountain – you get a beer at the top of the mountain. 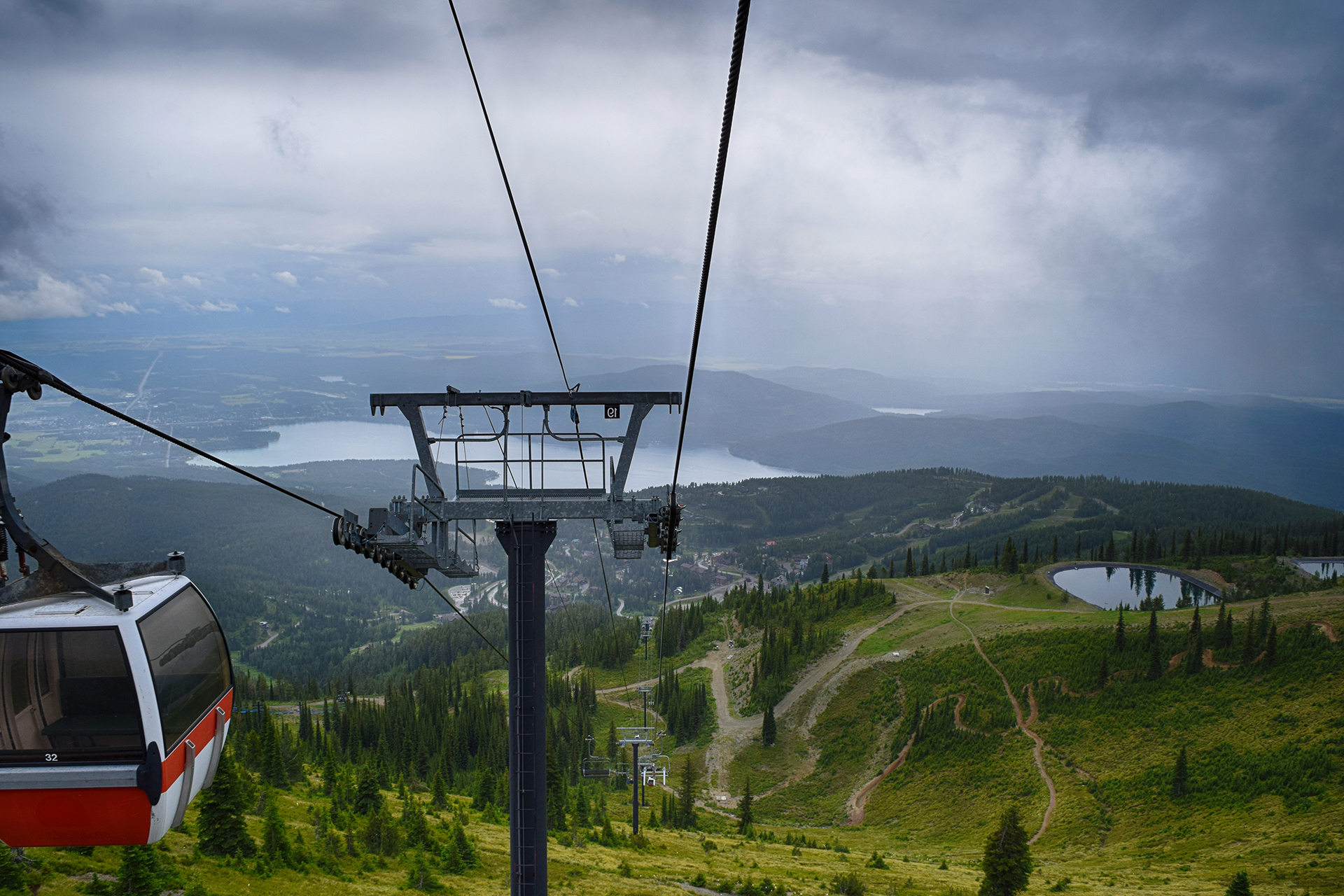