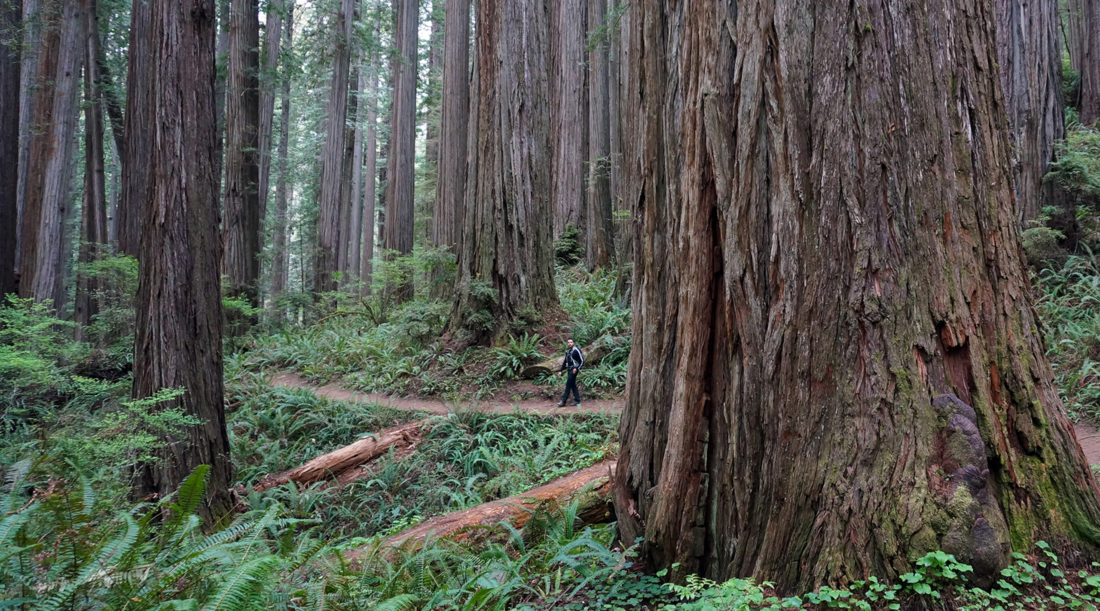 After leaving behind beautiful Napa, we embarked on a two-week tour of the redwoods of Northern California.  During those two weeks we stayed in three different towns, visited 5 state and national parks, and had our minds blown too many times to count.  But rather than try to break it all down into a bunch of little blog posts (and because we’re hopelessly behind), we decided to just compile the whole thing here.

To put it another way that could not possibly be taken out of context, if you’re looking for pictures of big wood, you’ve come to the right place. 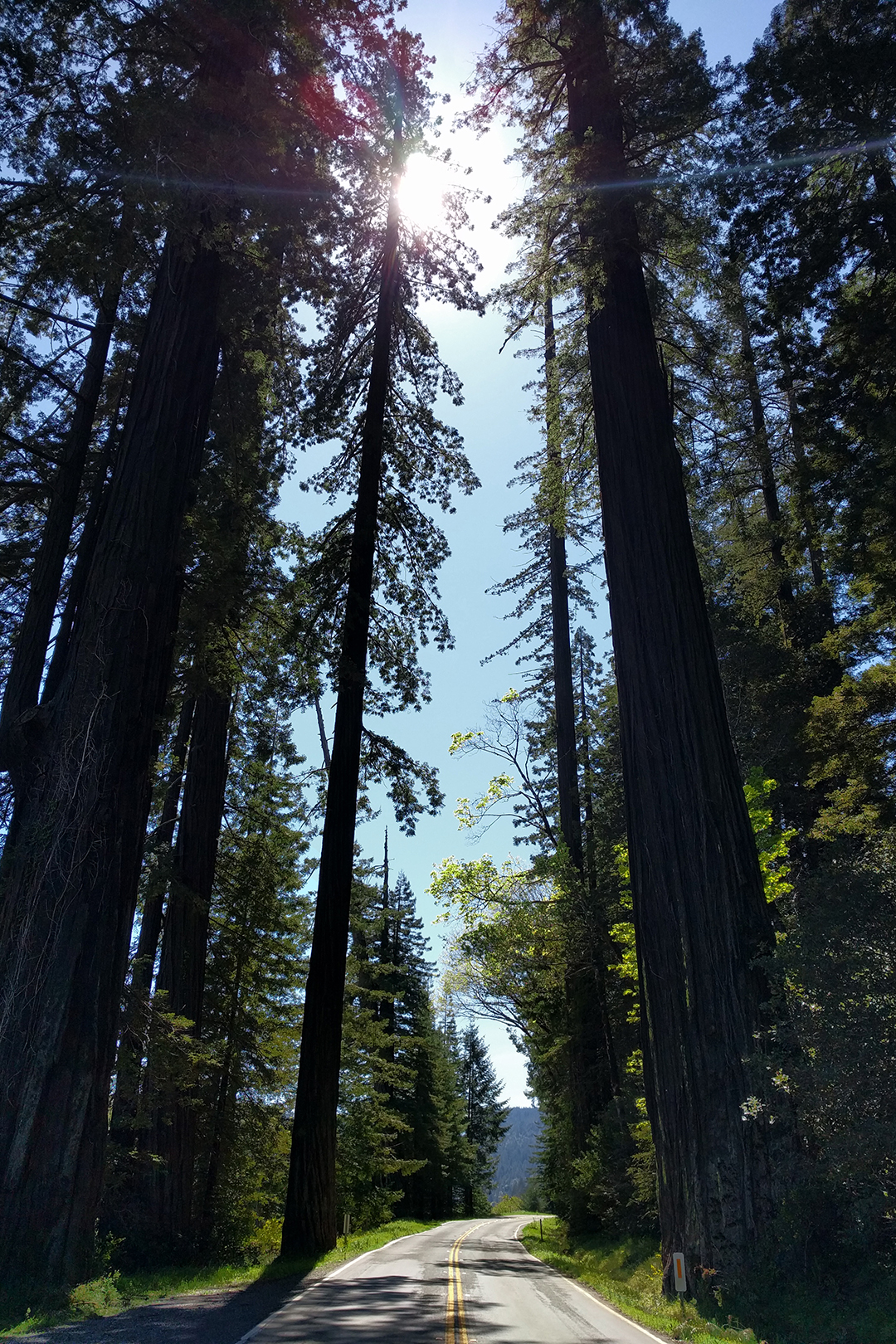 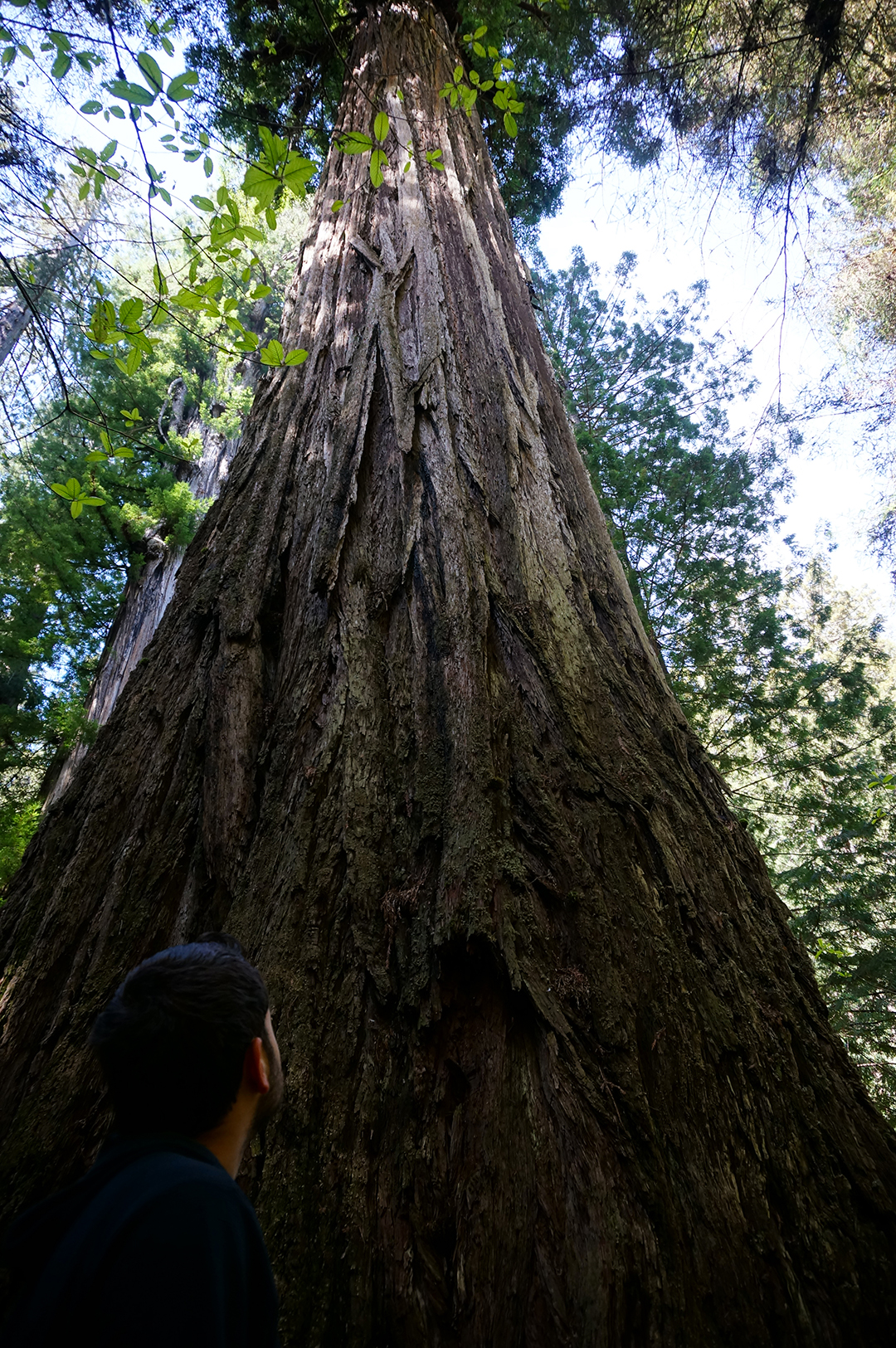 Before we begin, we have to make clear:  redwoods are pretty much the coolest trees ever. We didn’t know that much about them before we went, but here’s what we learned.

1. “Coastal” redwoods are one of the two main types of redwoods (a third type was recently discovered in China). Compared to giant sequoias, their cousins from the Sierra Nevada mountains (we saw some at Yosemite), coastal redwoods are taller but thinner, their bark is a deeper red/brown, and they look more like normal, but huge, trees.  To make things a bit easier, if we say “redwoods” in this post, we are referring to coastal redwoods.

2. The oldest known redwood is about 2,200 years old, which means it was born before Julius Caesar.

3. Redwoods can grow to be nearly 400 feet tall and 30 feet wide! It takes centuries to grow so large.  The location and size of the largest trees ever found are intentionally kept hidden to prevent visitor damage.

4. Redwood bark contains chemicals which repels insects, including mosquitoes (!!). They are also incredibly resistant to fire and decay, and due to these properties and their immense size, it can take over 500 years for a fallen redwood to decompose.

5. Because they require very specific conditions, including huge amounts of water, coastal redwoods grow only in a thin strip along coastal California and southwest Oregon. They typically grow near rivers in areas that receive regular fog; these trees grow so tall that it is difficult to move water all the way up the trunk, which means starting the water halfway up (via fog condensation) is helpful.

6. Like giant sequoias, redwoods used to be found throughout the Pacific Northwest, but due to extensive logging, old-growth redwoods (the really big ones) can now be found only in state and national parks. Only 5% of the original trees remain.  We owe the fact that any redwoods exist at all primarily to dedicated conservationists, most notably the Save-The-Redwoods-League, founded in 1917.

Humboldt Redwoods State Park & the Avenue of the Giants

Chances are that if you’ve been to a redwood park, you’ve either been to Muir Woods near San Francisco – where the trees top out at “only” 260 feet – or you’ve driven the Avenue of the Giants.  The Avenue of the Giants is a 30 mile long scenic road that cuts directly through a huge, old-growth forest.  We stayed overnight in Stafford, at the northern end of the park, and only drove the last 10 miles – but it was spectacular.  In our opinion, this might be the best redwood park. 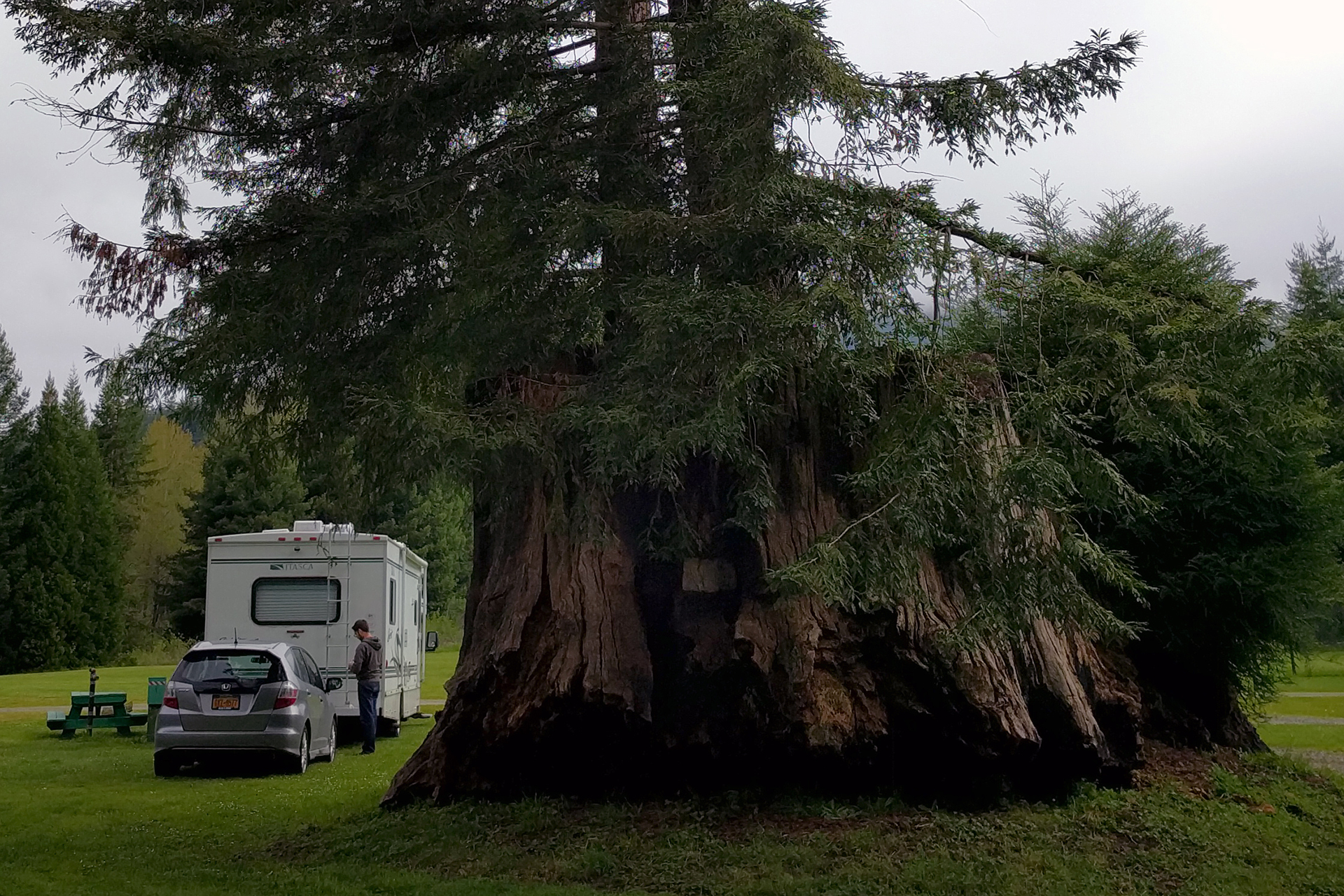 This was our campsite in Stafford, where we parked by the stump of an old growth redwood (with some new redwoods growing out of it). The stump dwarfed our RV.

After settling into our campsite, we headed to the Avenue of the Giants, and saw our first old-growth redwoods. We were blown away by their size and beauty.  Sadly, no picture can ever do them justice.  The groves we saw along the Avenue of the Giants were peaceful, quiet, and perfect – there is something indescribably serene about walking beneath the redwoods with nobody around.  The short hike we took through Rockefeller Grove was one of our favorites of all time, as was a random grove we visited along the side of the road.

There are some true skyscrapers to see.  Founders’ Grove contained some truly massive trees, including Founders’ Tree, at 346 feet high, and a fallen tree that was even larger.

Semi-fun fact! Humboldt Redwoods State Park was preserved when the Save-The-Redwoods League convinced John Rockefeller to donate two million dollars with a picnic in an old-growth grove in the park.  That grove is now known as Rockefeller Forest.

We drove out to the descriptive Big Tree Area, but it was located across the river from the parking lot, and the bridge had not yet been put up for the season.  Luckily, a fallen redwood provided a natural – and highly scenic – alternate crossing. 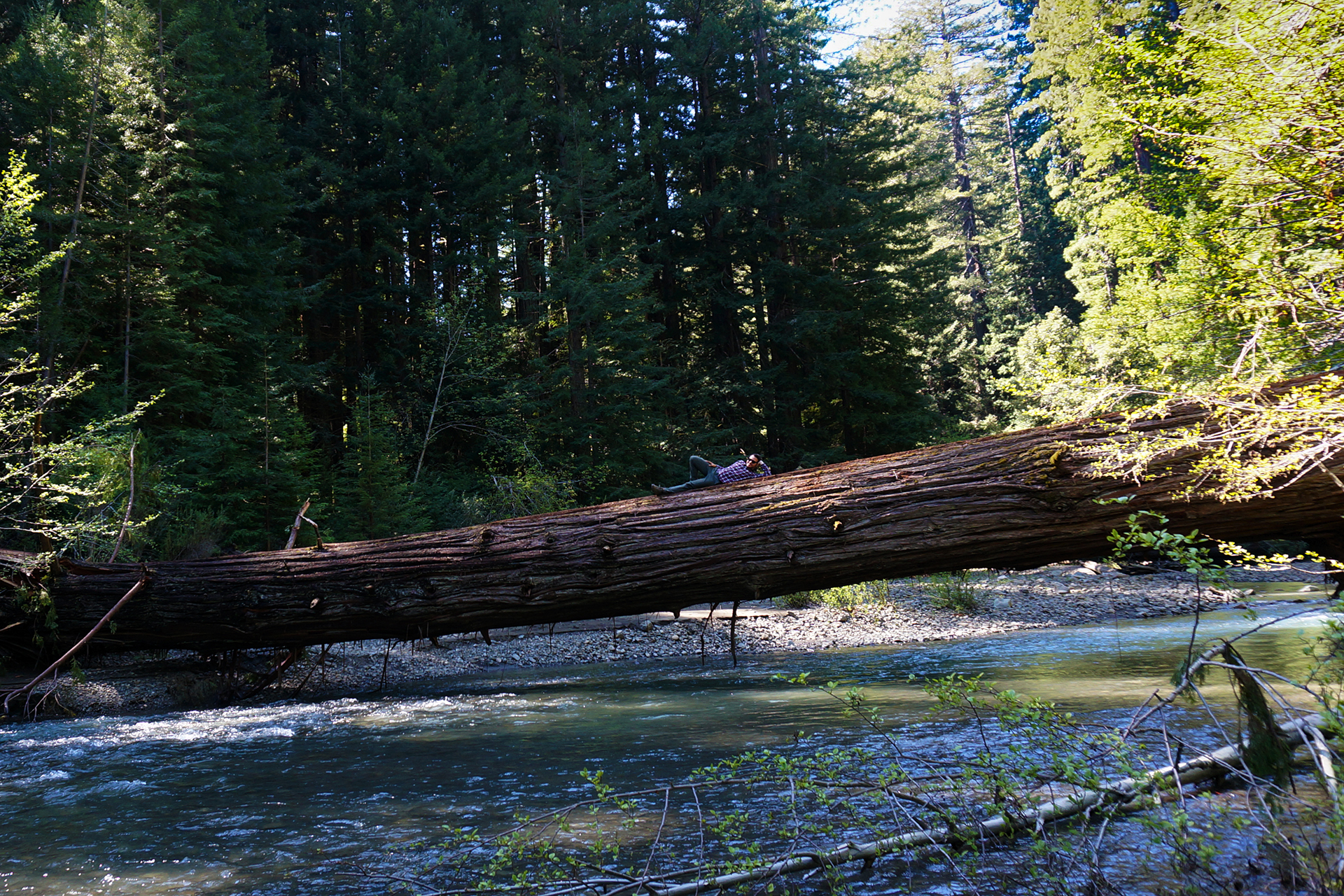 After hamming it up, we made our way across to Giant Tree, an incredible 363 feet high with a 53 feet circumference.

Giant Tree is most likely the biggest redwood we encountered on our travels, and it was extra-sweet because absolutely nobody else was around (or dared to walk the bridge).  The driving through Avenue of the Giants is also spectacular, not just on the main road, but especially on the Bull Creek Flats side road we took.  The road weaves carefully between giant trees, in places wide enough for just one car, while the branches form a vaulted cathedral ceiling overhead.  It’s pretty magical. 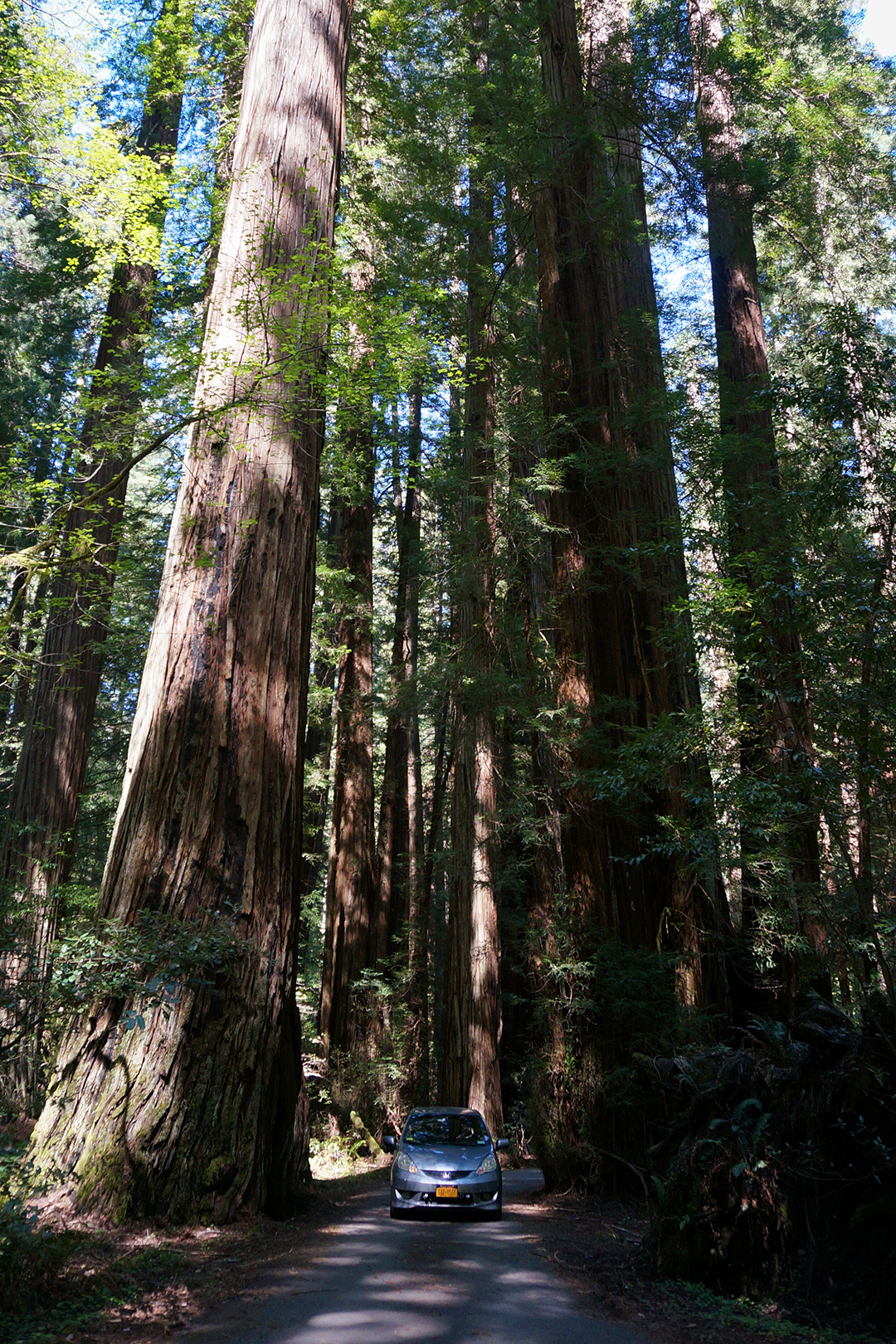 After the Avenue of the Giants, we headed to the tiny town of Trinidad, California, just north of the larger towns of Eureka and Arcata.  Since it was the “shoulder season,” a term we recently learned, RV camping was wide-open, and we scored our cheapest spot ever… in a redwood forest! The extremely chill young woman at the RV park stacked some discounts for us, and our stay worked out to about $13 per night for a week.  (We later added one additional night, and a different, extremely un-chill woman yelled at us for having so many discounts and made us pay $40.  Boo!) 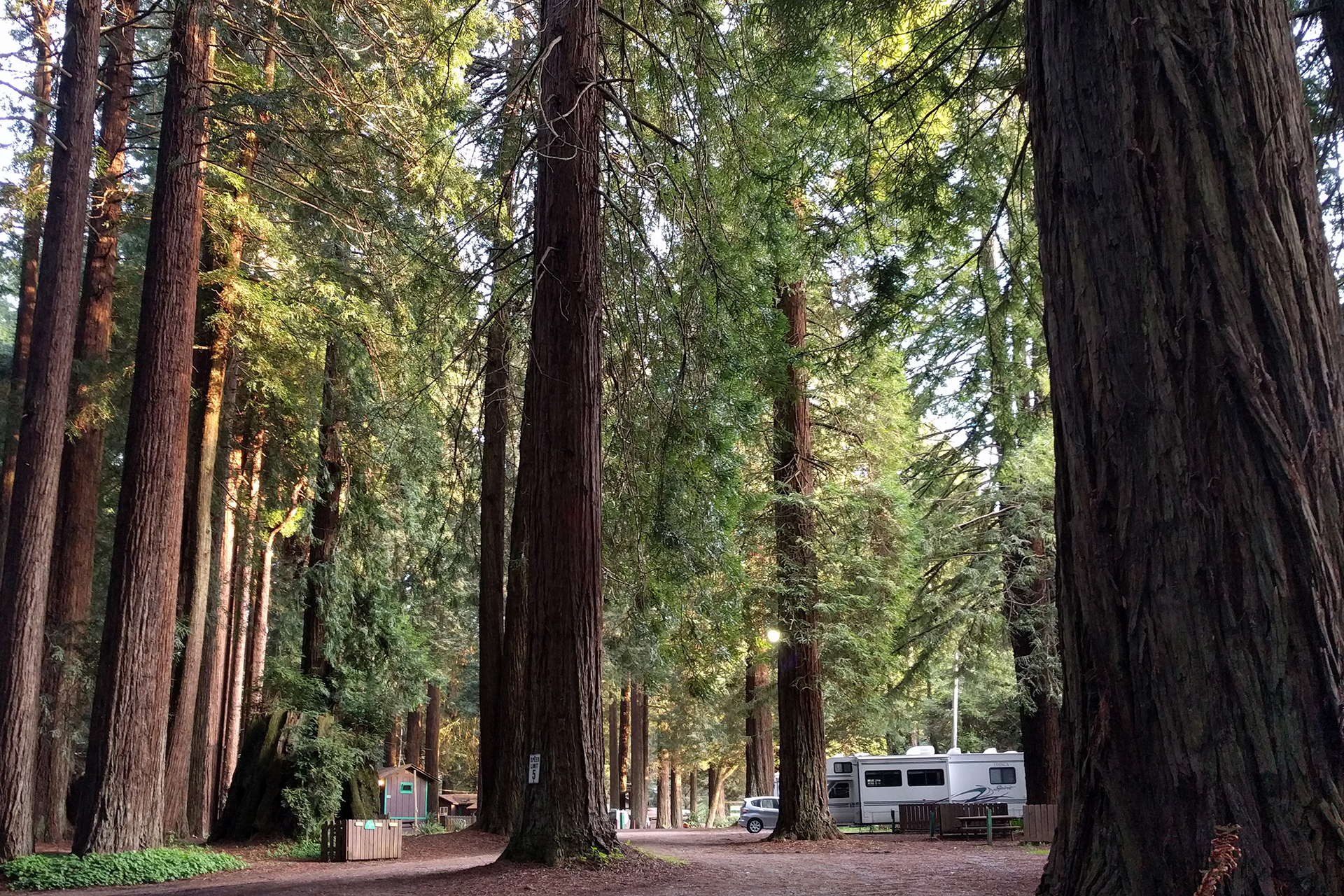 Speaking of chill, Arcata is probably the most hippified town we’ve ever been to.  We enjoy that sort of thing, but it does take a while to accomplish errands when every person in town appears to be stoned.  There was a lot of patchouli and slow-motion cashiering, which for these former NYC residents can be a little frustrating.  One fun anecdote: while we were waiting for our groceries to be bagged, a former employee of the grocery store was behind us in line, and the manager came over to say hi.  She then told him that he had left his watch at the store, and she had it in her office, where the watch alarm goes off at 2 p.m. every single day.  “I haven’t worked here for two years!” he said.

Yes, things move a little differently in northern California.  Unfortunately, it’s not always hella good.  We had high hopes for the town of Eureka, known for its Victorian architecture, but didn’t do much sightseeing since it was totally overrun by sketchy drifters.  We’ve noticed a lot of drifter-types on the West Coast in general (mild climate), but Eureka was in a class of its own.  We did get a few things fixed on our RV by an awesome service technician, but otherwise, we mostly stuck to the trees. 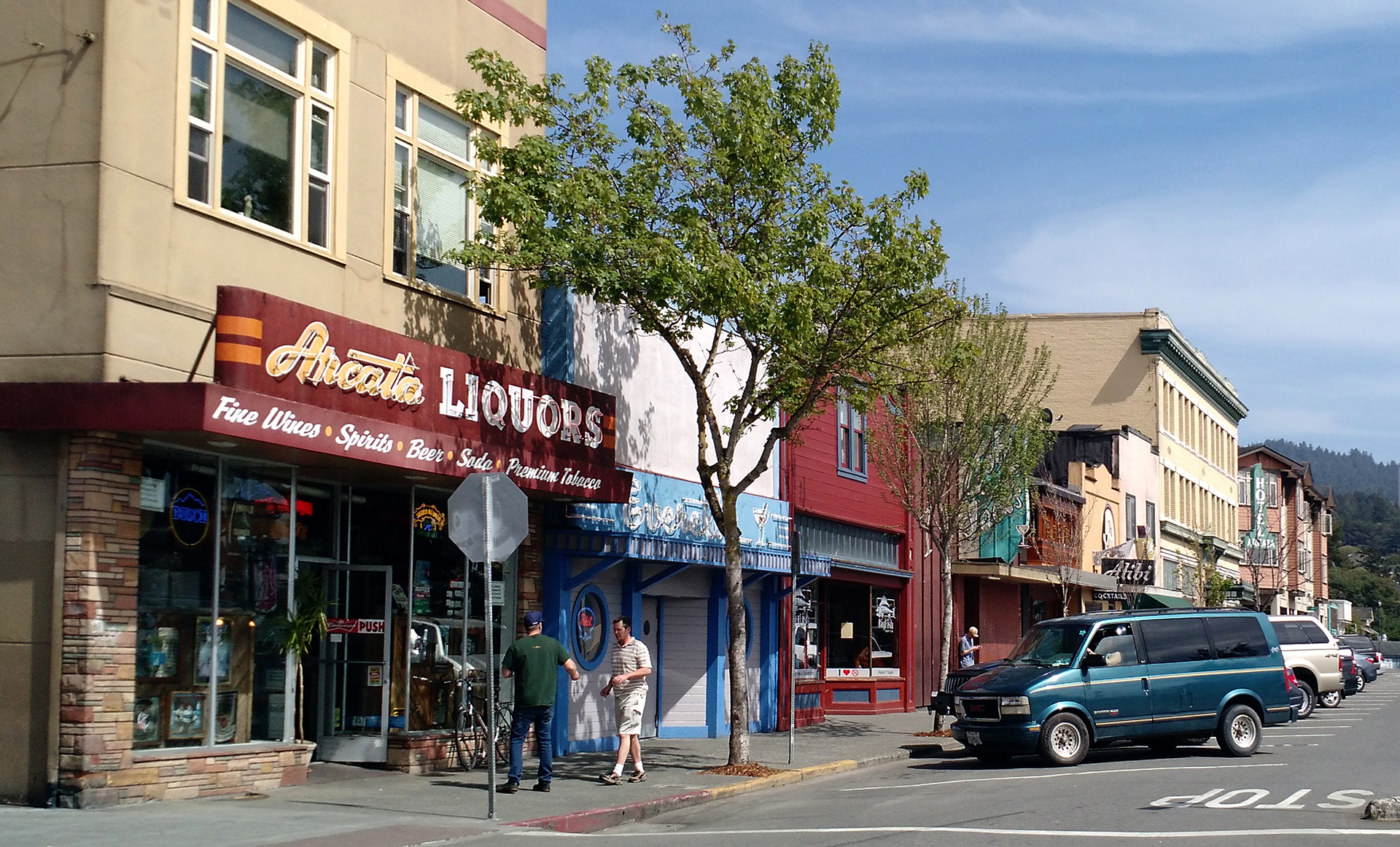 Speaking of the trees, we visited Prairie Creek State Park and Redwood National Park, which are adjacent.  There’s tons to do, but but we focused on two hikes.  The first, within Redwood National Park, was a loop through some dense, green woods to a rare find: a waterfall within a redwood grove!  It was all quite pretty, although the moss-covered trees here were less memorable than elsewhere.

Prairie Creek was a little cooler.  We did a very long hike – around 12 miles – through the forest, stopping for a picnic at a beach on the Pacific Ocean.  Then, we hiked into Fern Canyon, a long, steep-sided canyon absolutely covered with ferns and moss.  It feels very prehistoric, and indeed, a scene from Jurassic Park II was filmed here!

But it was also extremely wet, and with the bridges not yet up for the season – a running theme – we had to step carefully as we crossed back and forth over the stream that runs through the canyon.  Jake’s hiking stick was invaluable for balance as we jumped between fallen branches and slippery rocks, and we made it in and almost all the way out – until a rock turned over on Jake, and he had to walk five miles back with soaking wet socks.

Semi-Fun Fact! Unusually, the 6 main redwood parks are operated jointly between the federal government and the state of California, which is why they’re called the “Redwood National and State Parks.” The only exception is Humboldt Redwoods State Park, which is run by California alone. The sixth park is Del Norte, which we never visited; it’s close to Jedidiah Smith State Park.

Soggy hosiery aside, this was a long but beautiful stroll through the redwoods.  Except for the areas right next to parking lots, we were all alone.  On the way back, we went more than four miles without seeing another soul.

The drive to and from the park is spectacular, although a little sad, as Highway 101 cuts a four-lane swath directly through pristine forests.  (While building it, they even tried to route the highway through the middle of several old-growth redwood groves – why??!)  In places, Highway 101 runs alongside the Pacific Ocean, as well as grassy green meadows full of wandering elk herds.  If you can overlook the wanton obliteration of nature required to create it, it’s definitely a drive worth doing.

Our final redwoods trip was to Jedidiah Smith State Park, which sounds suspiciously like a place from the Simpsons.  We stayed in tiny Crescent City, California, right next to the ocean.  It was great, except for the nearby lighthouse, which made a loud “boop” every six seconds or so, all day, all night. 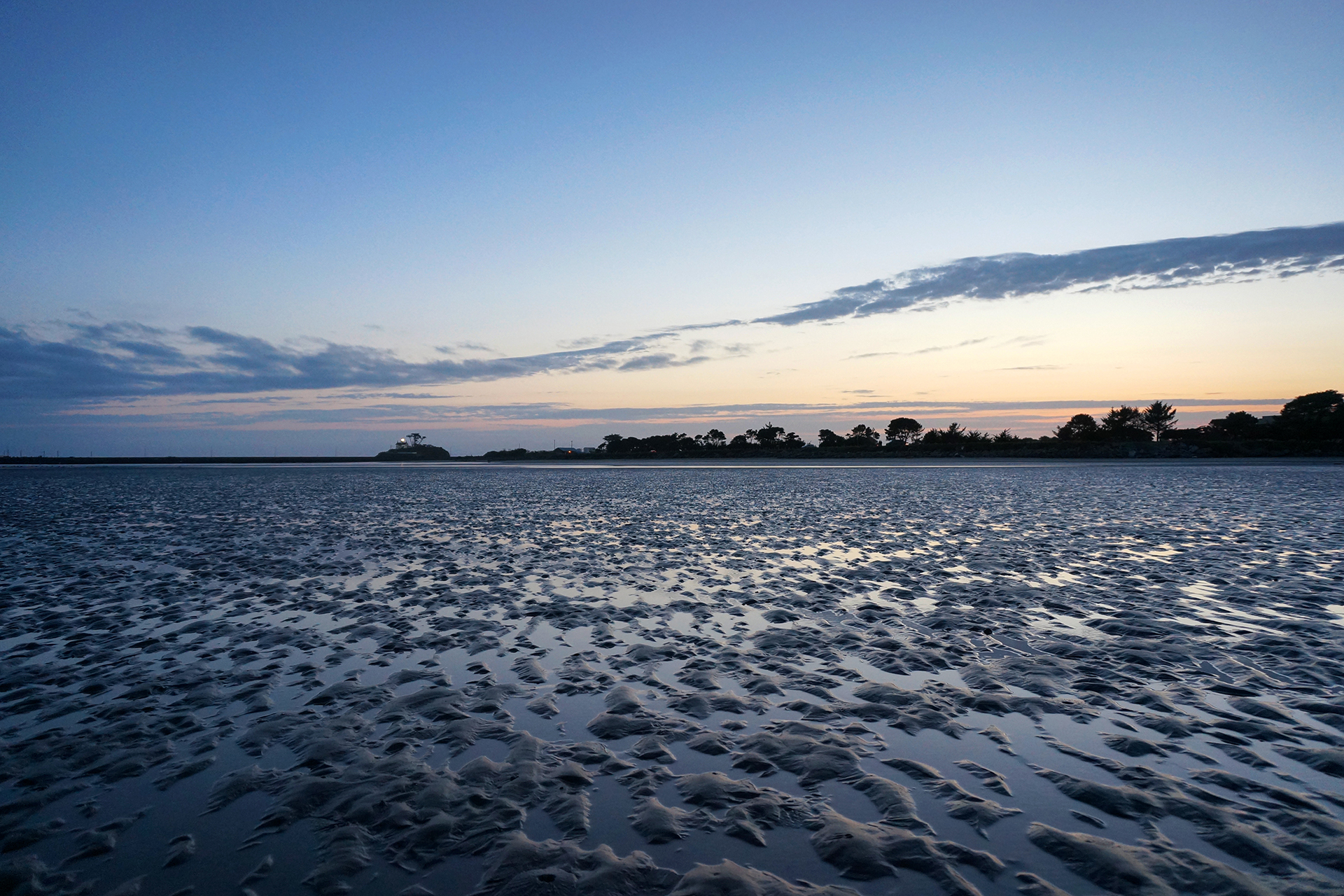 The redwoods themselves were great.  Jedidiah Smith is the least-developed of all the parks, requiring a bumpy drive along a dirt road through the forest to reach the biggest trees.  After seeing so many beautiful groves, it is easy to feel jaded, but the Endor-like forest and the mammoth Boy Scout Tree (5th picture in slideshow) amazed us anyway.

It’s really a bummer that redwoods grow in such a small part of the world, because they’re pretty awesome. The redwoods were #1 on Jake’s pre-roadtrip list of things to see, and they didn’t disappoint. It was a rare privilege to do so many redwood hikes, and not an experience we’ll forget.

Where are you now?  Longmont, Colorado, beating the heat currently enveloping the Dakotas.

Next location?  The Badlands in southwestern South Dakota, and the numerous associated parks (including Mt. Rushmore!).