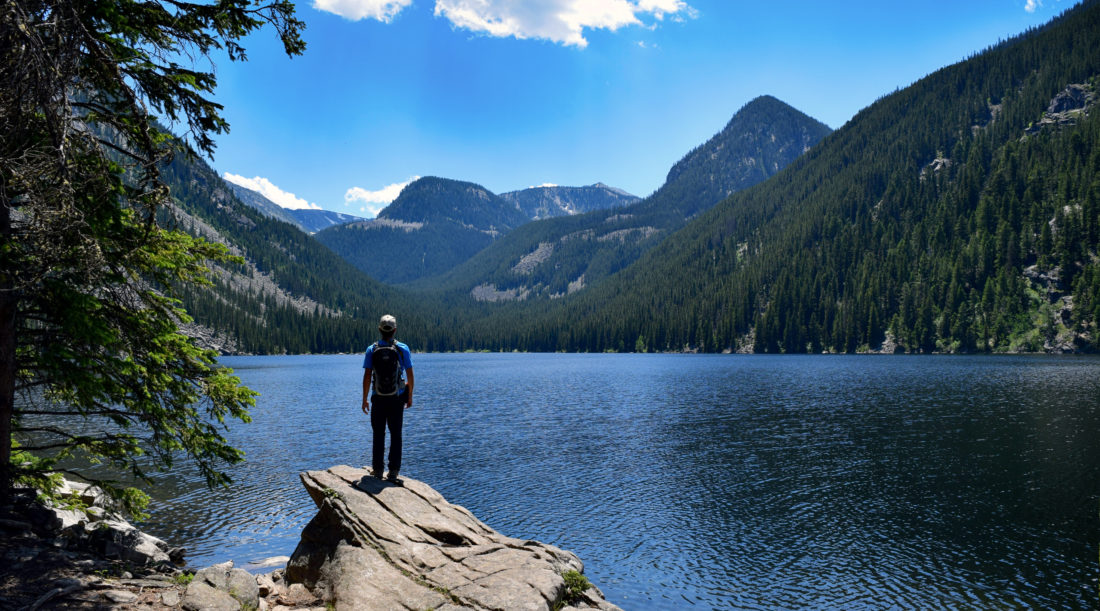 After three days at glorious, crowded, beautiful, stinky Yellowstone, we had had our fill of the press of humanity for a while.  So we headed to Bozeman, Montana – because if you’re looking for a wonderful place to get away from other humans, it’s tough to beat Montana. 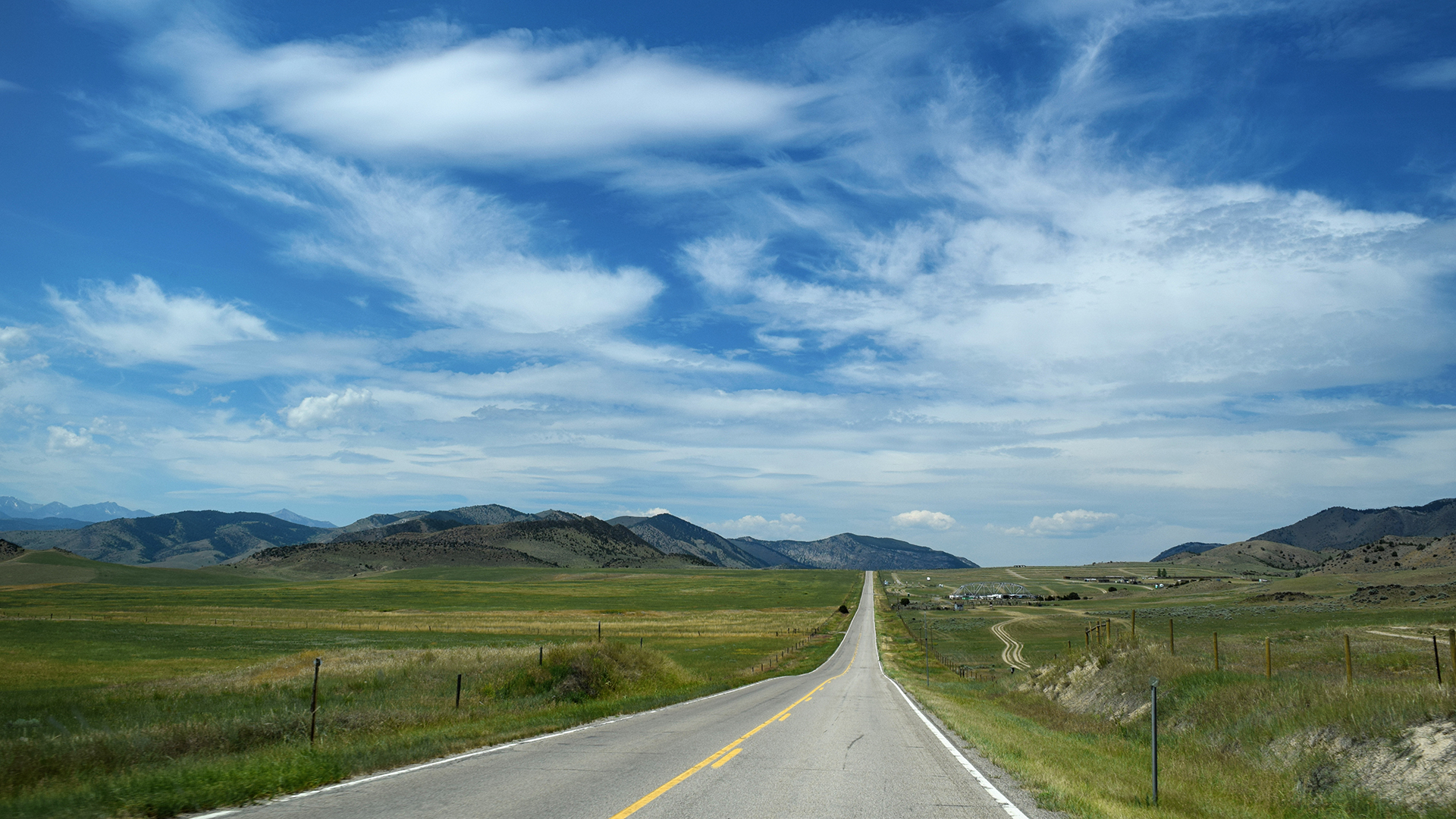 That’s true for most of Montana, anyway.  But Bozeman itself is actually a fantastic little city, a gem of a college town in a seriously rural state.  It reminded us of Ithaca, New York, a place we love, or a smaller version of Boulder, Colorado.  There was an incredibly cute evening farmer’s market, teenagers dressed to the nines; a hip breakfast spot with giant cinnamon rolls; and a funky coffee shop, where we listened in on the world’s most awkward first date. 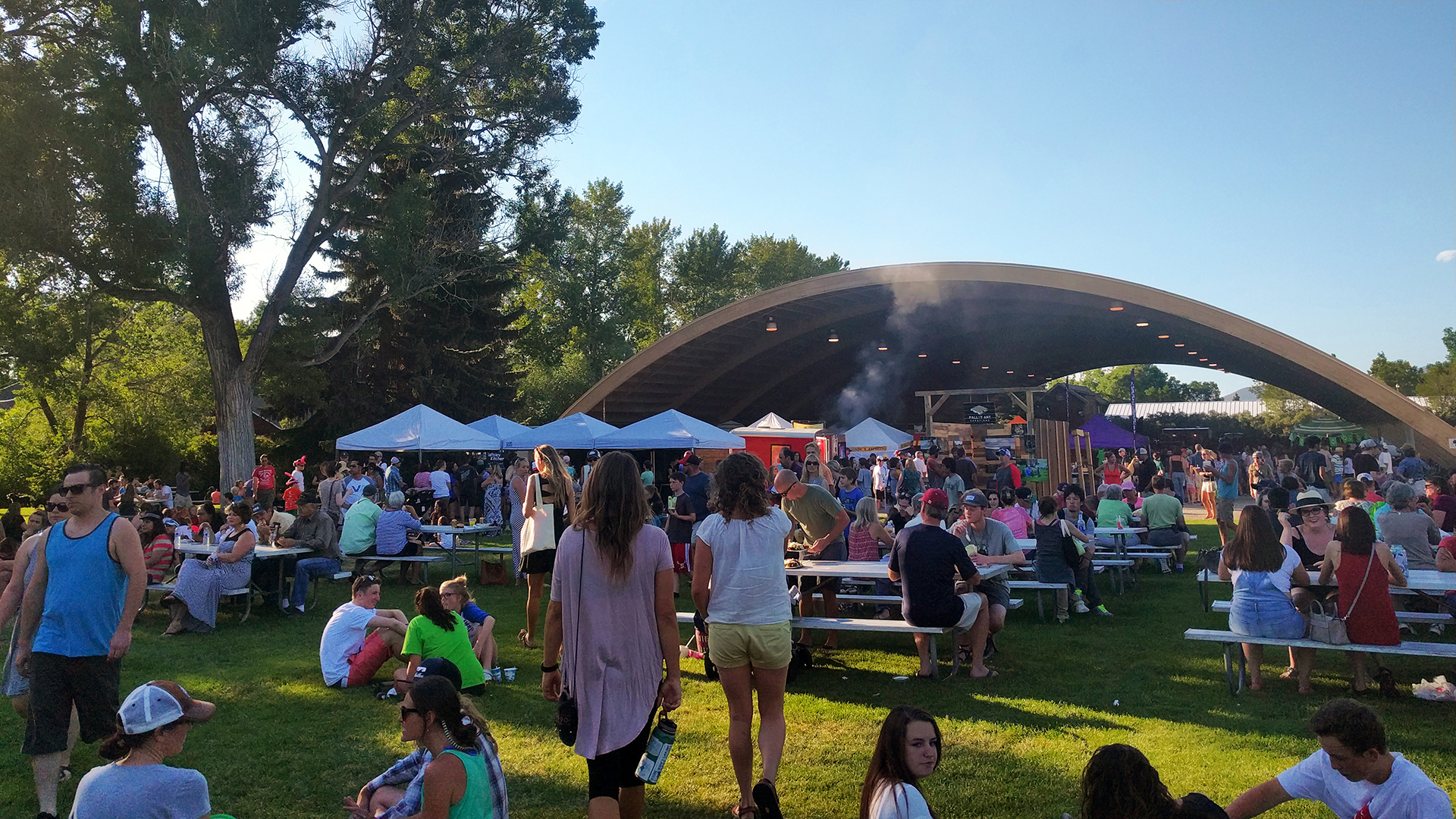 In fact, the town is so charming that we found ourselves Googling things like “Reasons not to move to Bozeman.”  Turns out that multiple winter days colder than “10 degrees below zero” is a pretty compelling reason, but being there in the summer sure was nice.  The only downside was that we were parked on the edge of town, and somehow got no Internet through our Internet hotspot at all.  Took it out one day to test, and found out we were about 100 yards away from full service.

Ah well.  We were in Bozeman for 5 days anyway, 4 on purpose, and here’s what we did.

Montana in general is beautiful, and the area around Bozeman is no different.  The outdoorsy options around here are top-notch.  We drove through a heavily wooded, steeply-sided canyon and parked in Gallatin Canyon for a hike to a place called Lava Lake. 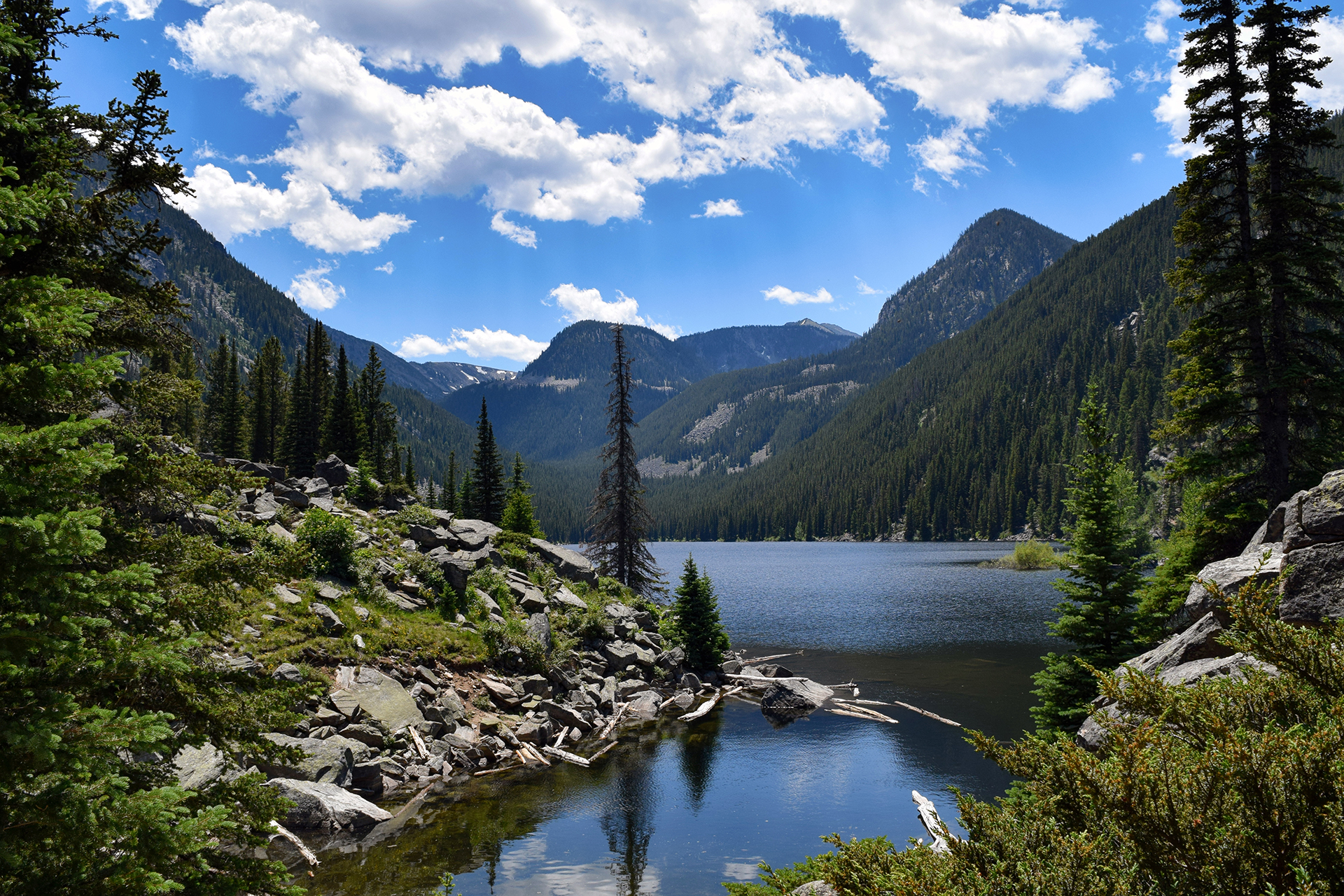 The “Lava” levels were frankly disappointing, but we awarded top marks for “Lake.”  The water at Lava Lake was a stunningly deep blue, surrounded by a pristine pine forest.

We sometimes joke that the best part of hiking is eating your lunch at the top.  Definitely not always true, but it might apply here.  How can you not love a sandwich with a view like this? 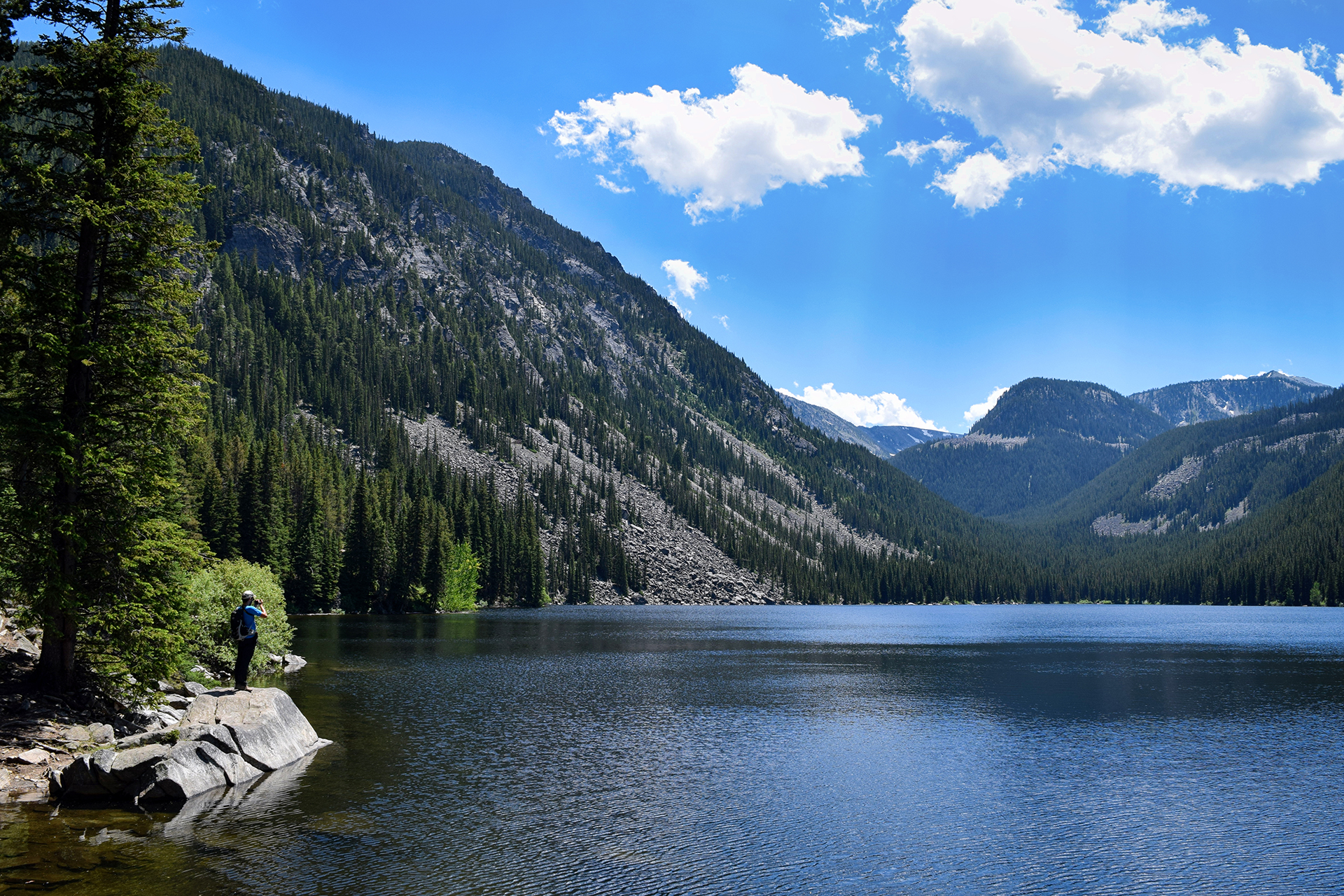 We did one thing in Bozeman we have never done anywhere else: give our RV a bath!  True story.  The RV is so large that it isn’t easy to wash – most RV parks forbid washing, so it can only be washed in a special truck wash, and those can be expensive.  Because we were constantly on the move, we just never really saw the point.  But after spending months murdering the insect population of the United States with our overhang—and maybe because we were about to see Jake’s family and had to pretend to be adults again—we decided it was finally time.

Armed with a hose, a long-handled sponge, and a beautiful summer day in Montana, we went to work.  It ended up taking the entire day and an exhausting amount of scrubbing, but it looked fantastic when we were done. 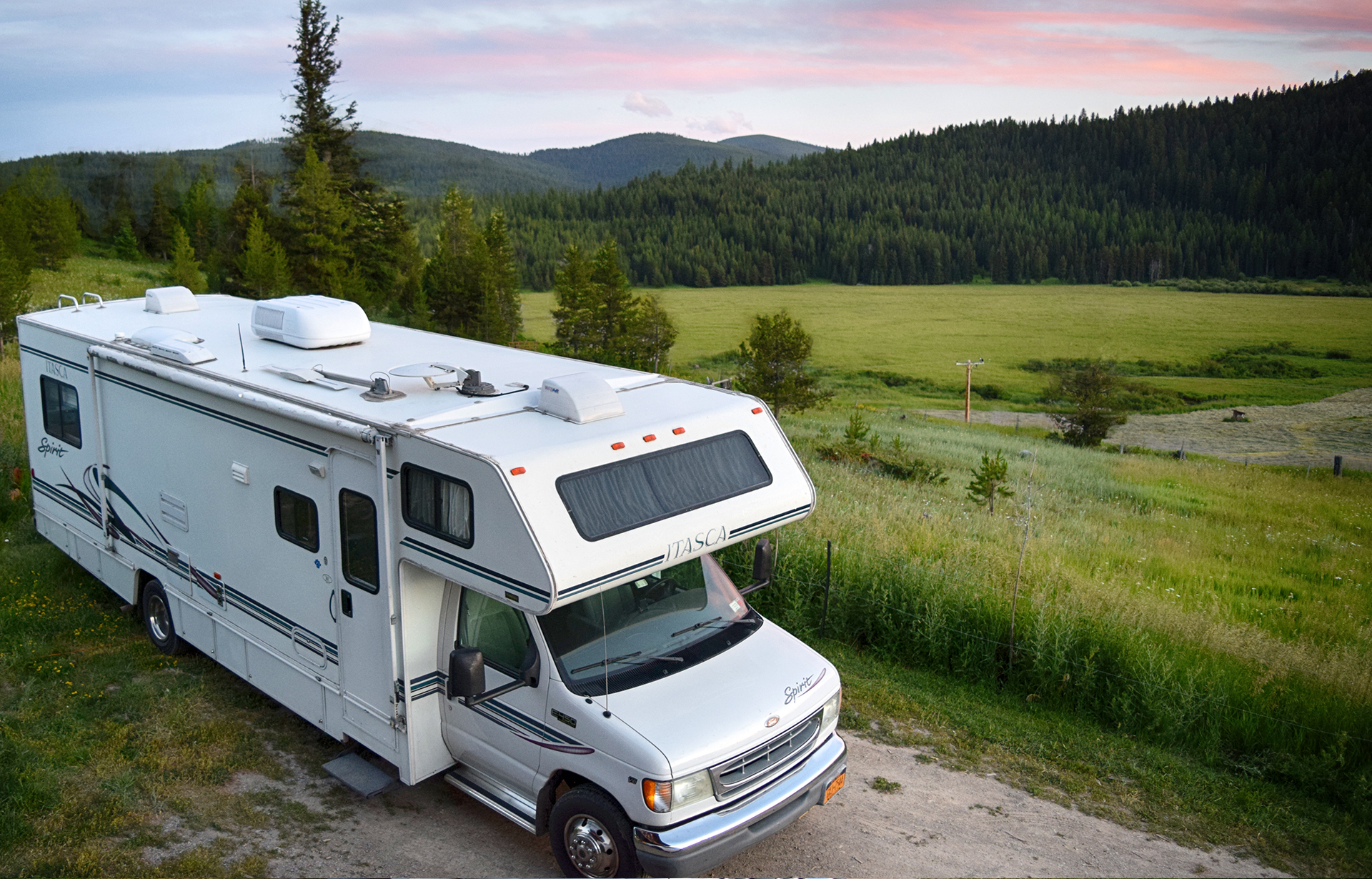 Until we drove through the next insect cloud, of course.

It took longer than we expected to get to the next insect cloud.  As we headed out of Bozeman, we started to encounter strange issues with the RV and the tow car.  As it was a busy summer Friday, we had to scramble to find a place that could look at the RV on short notice.  It ended up taking about five hours to get everything fixed.

What was the problem?  Well, a fuse was blown up front, something they fixed right away.  But it wasn’t until they had checked everything else out that they realized that one of the “truck” fuses under the hood was missing.  (There are several empty slots and no legend, so we can understand missing it.)  Where did it go?  How could a fuse just jump out of the RV without causing any other problems?

We may never know the answer.  But since we didn’t get the RV back until late in the afternoon, we ended up turning around and staying at the Bozeman Wal-mart.  As it turns out, it was July 1st, and a year to the day exactly after we did something similar on our very first night in the RV. 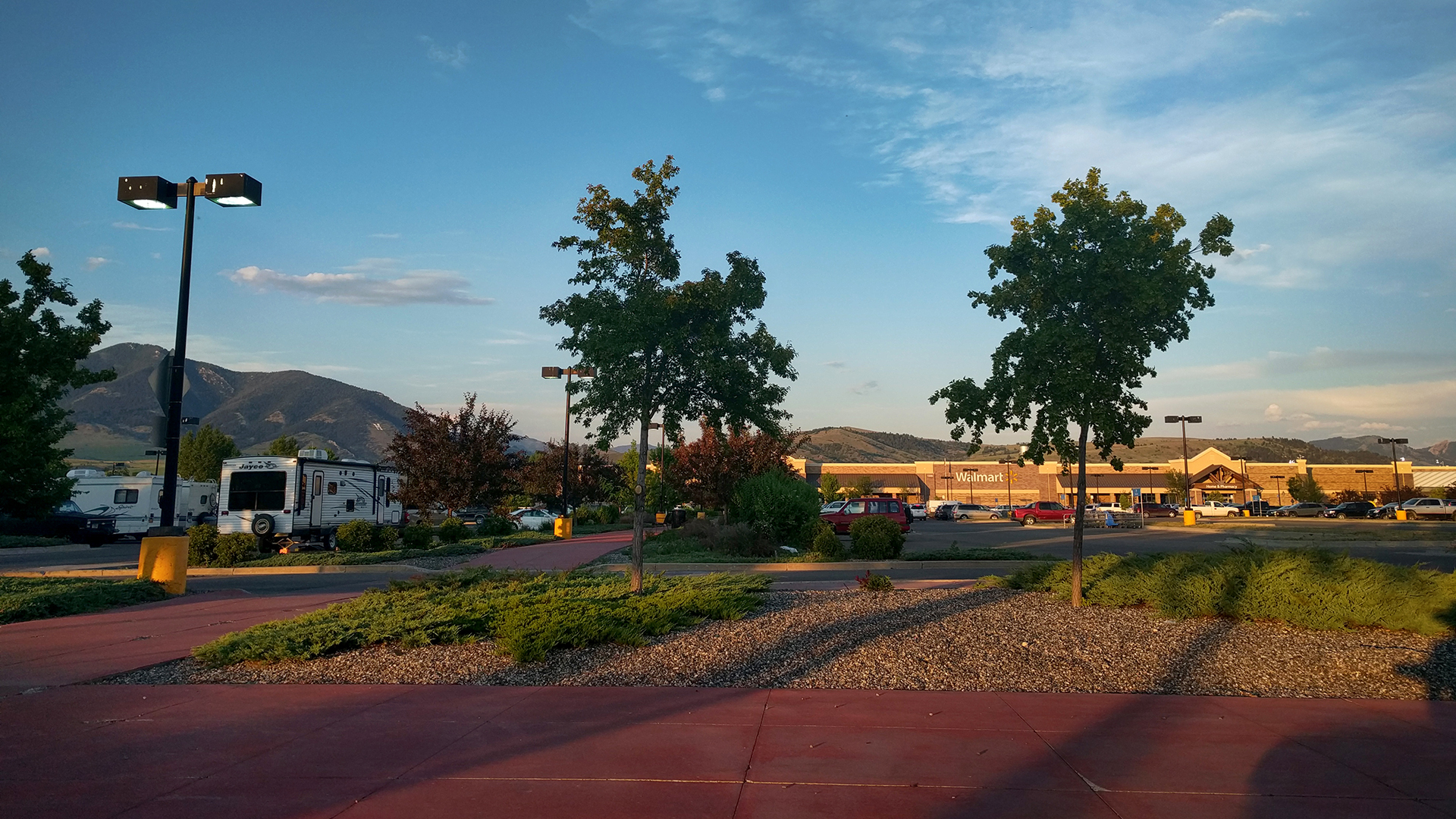 On our way up to Glacier National Park (coming next, and probably not for a while), we stopped off for a day trip at Lewis & Clark Caverns State Park.  “Lewis & Clark” had nothing to do with the park – their name gets slapped on a lot of things out West – but the caverns were excellent, well-developed and full of interesting formations.

That said, it was a nice stop-off, but nothing worth making a trip for.  Maybe if we hadn’t been to cave nirvana at the Caverns of Sonora, we would have been more impressed.  As it was, our favorite part was probably the beautiful hike to the entrance, or the gorgeous drive back to the highway. 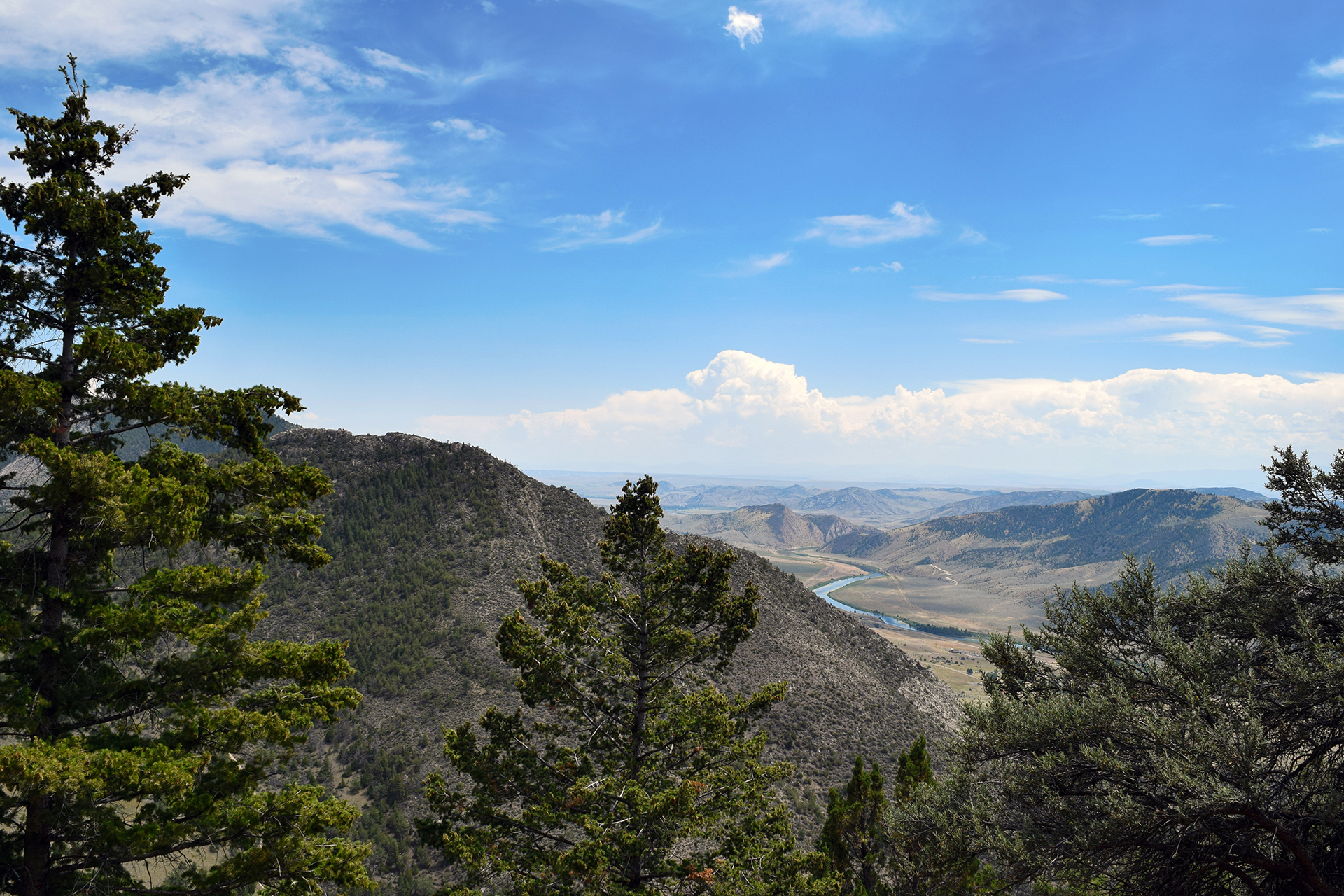 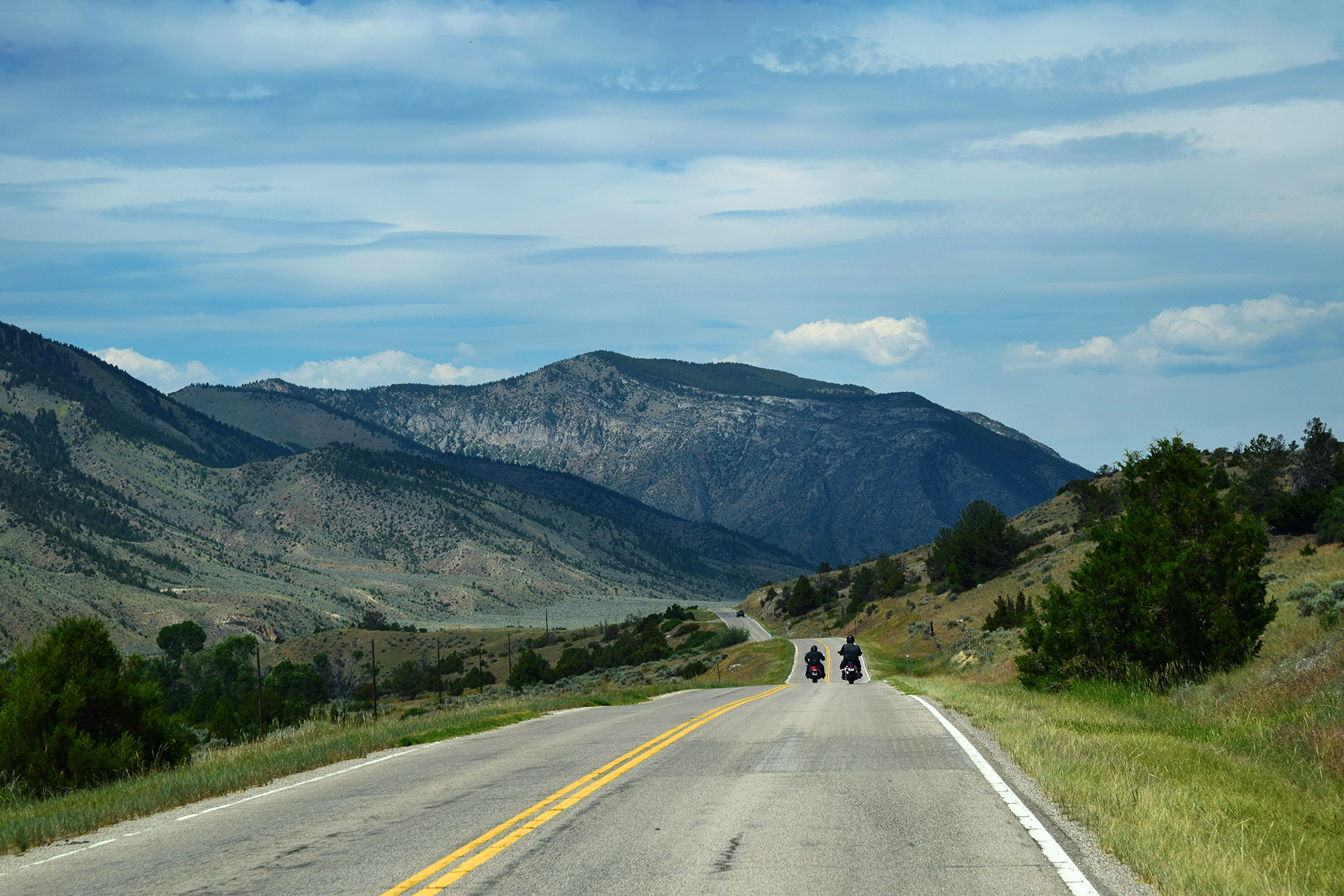 Now, on to Glacier!