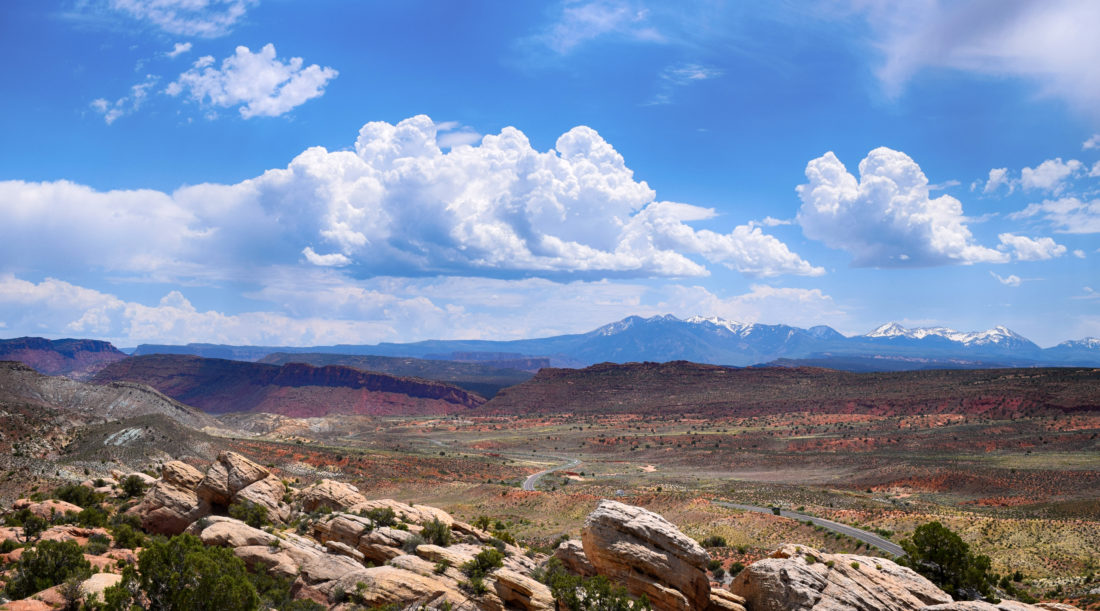 After a long day of slot-canyon hiking and goblin hoodoo appreciating, we arrived in Moab late on Memorial Day.  We stayed for a glorious 10 days, an eternity in Heather-and-Jake-roadtrip-world, in part because Moab is just so damn cool.  It’s probably the most EXTREME place in the country, activity-wise, with world-famous mountain biking we were far too terrified to try, along with rock climbing, whitewater rafting, desert backpacking, hot air ballooning – you name it.  It’s exactly the place you should go if you feel like tempting death on your vacation.

The inhabitants of Moab are mostly badass adventurer types, and they drive pickup trucks to match.  Moab is located in the for-real desert, and there are a lot of options for off-roading, in the sense that you can just drive wherever the hell you want because there’s nothing else there.  It’s the only place we haven’t been angry to see crazily jacked-up pickup trucks at the grocery store. (Looking at you, Houston!)  And although it can be touristy, Moab isn’t so bad compared to most, and there’s even a brewery serving real, full-strength beer.  Take that, Utah!

Us in most of Utah.

A Land of Ice and Fire

So Moab is certainly cool, but also, dear God it was hot.  Triple digits were not uncommon, and it felt much hotter than that.  The desert sun is unrelenting (and rarely bothered by clouds), and the ground heats up over the course of the day until it just feels like you’re standing in a furnace.  The locals were unfazed, but we found the sensation of slow-roasting ourselves to be unpleasant.  For that reason, our adventuring options were mostly limited to the hours of 6 am to noon, by which we of course mean 10 am to noon, or after sunset.

Because of the heat, we ended up missing out on a few things we wanted to try.  However, we still got some quality visits in to Moab’s two famous national parks, Canyonlands and Arches, which will be coming in individual blog posts due to their “awesomeness” and our “crippling number of photos.”  We also visited a few of Moab’s other sites, which we’ll detail below.

One amusing aspect of our stay?  The campground we stayed in had several cottonwood trees, which are large pretty trees that release their seeds for a few weeks in the spring.  It happened to be that time of the year, and we found out that “release their seeds” means “release their seeds ABSOLUTELY EVERYWHERE CONTINUOUSLY FOREVER.”  It looked like snow, notwithstanding the scorching heat, and it accumulated like it, too: the maintenance crew cleaned it up with snow shovels.

We took a video; it’s kind of relaxing.

Right outside of Moab, there is a miles-long stretch where dozens of people practice rock-climbing, which means parking along the road and setting up mats on a random rock wall to try their hand (or their toddlers’ hands).  Just past that, we parked in a lot near some railroad tracks to visit a TripAdvisor-recommended area favorite: Corona Arch. 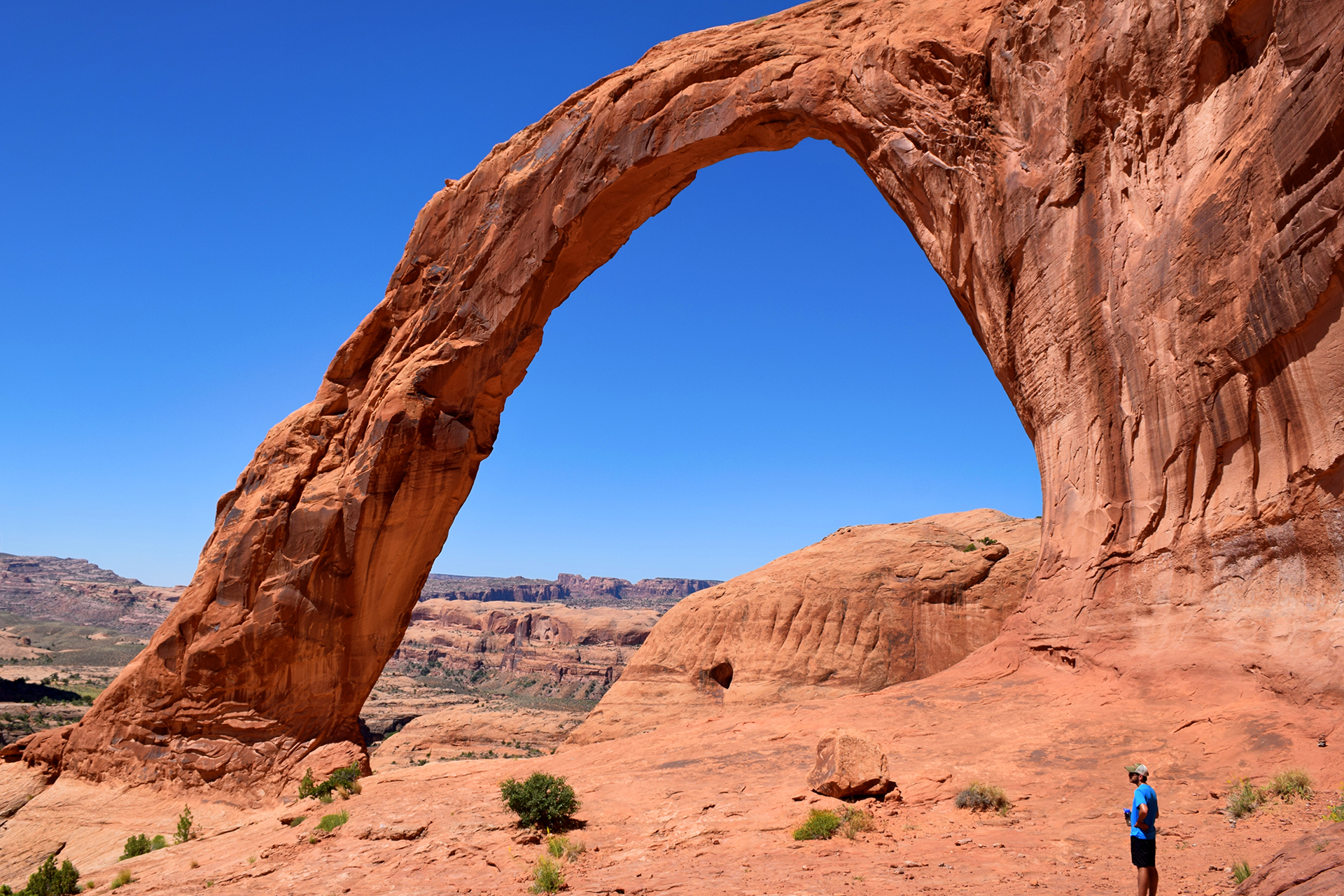 Now, Arches National Park is nearby, and we’ll have many, many more natural arches to show you, but Corona Arch is just too cool not to share.  It’s utterly massive, unlike many of the arches at Arches, and when we visited, almost nobody was around.  (Which is definitely unlike Arches.)

By the way, once upon a time, the “world’s largest rope swing” hung from Corona Arch, allowing a 100+ foot pendulum freefall (here’s a video).  Sadly, a few years ago someone died from a rope set too long, and another become critically injured.  So: no more rope swing, but Corona Arch is pretty great anyway, and the hike to get there was absolutely beautiful.

One of us (*cough*Heather*cough*) has an unreasonable obsession with dinosaurs, and that person forces the other, more handsome person to stop at anything with a dinosaur statue (e.g., Oregon).  Well, Moab and the area to the north are some of the country’s most fertile ground for finding fossils, and a huge replica dinosaur park was recently erected just outside of town.  We saw it while driving in, so… that was that.  We were going to visit the Moab Giants. 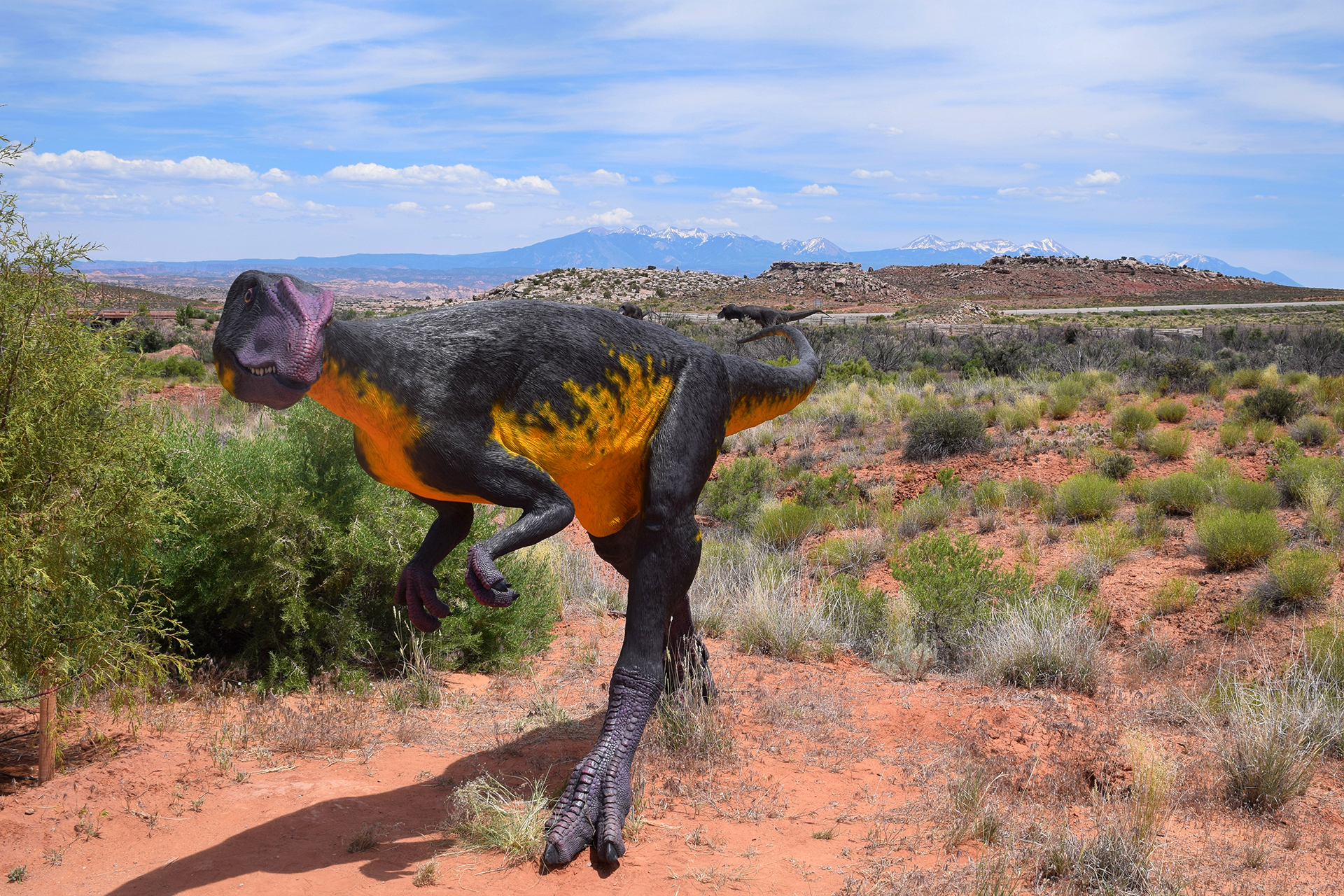 OK, so even the skeptics among us have to admit that the life-sized statues were pretty impressive.  There was quite a variety of dinosaurs, all set in the slightly surreal environment of the Moab desert.  We also liked that there was a real effort at scientific accuracy, as long as we ignored the weird, crotchless humans on the accompanying display panels.  Some of the dinosaurs even had feathers!

Of course, we mostly just took goofy pictures with them.

Who doesn’t love weird roadside attractions?  We obviously do, and the Hole N” The Rock house definitely qualifies.  The house is aptly named – nearly a century ago, the house was excavated out of a giant rock wall by a former miner.  More specifically, it was painstakingly blasted out with dynamite, because apparently that was something you could just do back in the day. 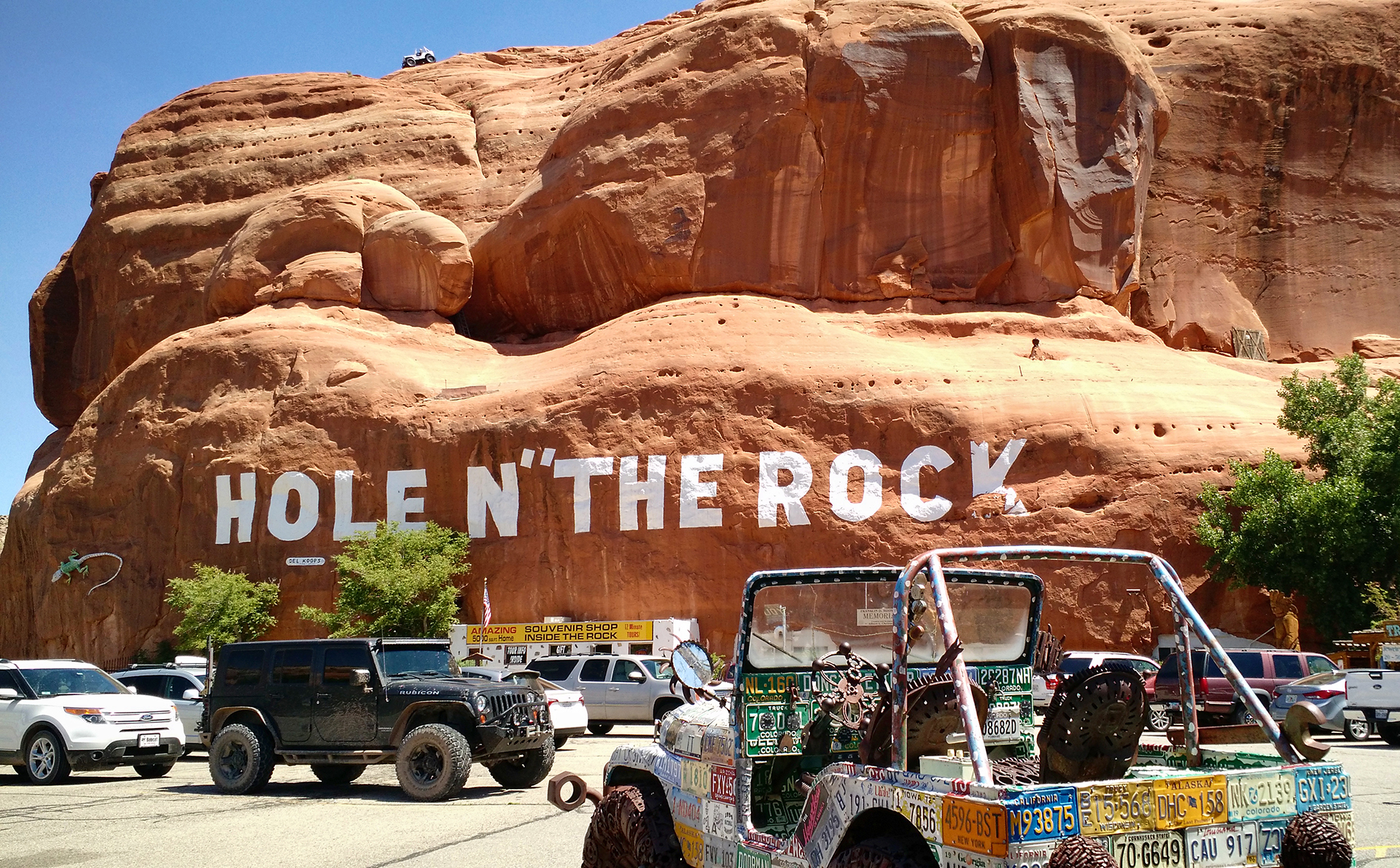 Albert Christenson, the man responsible for the house, spent 12 years removing 50,000 cubic feet of rock, doing the work with just the help of his trusty mule.  Albert and his wife, Gladys, then lived in the home for decades.  She passed away in 1957, and it has been preserved ever since.  (Or something like that. We didn’t fact-check this.)

We weren’t allowed to take pictures inside, but here’s some from their website.  It was surprisingly normal inside, quite spacious, and keeps a constant temperature.  If it didn’t take twelve years of backbreaking labor, we’d certainly see the appeal.

A man of many talents, Albert eventually turned his house into a roadside restaurant, and then a tourist attraction in its own right.  The house is filled with his own art, some quite good, some… less so, and there’s an enormous bust of FDR on the outside.  Along with a lot of other weird crap. 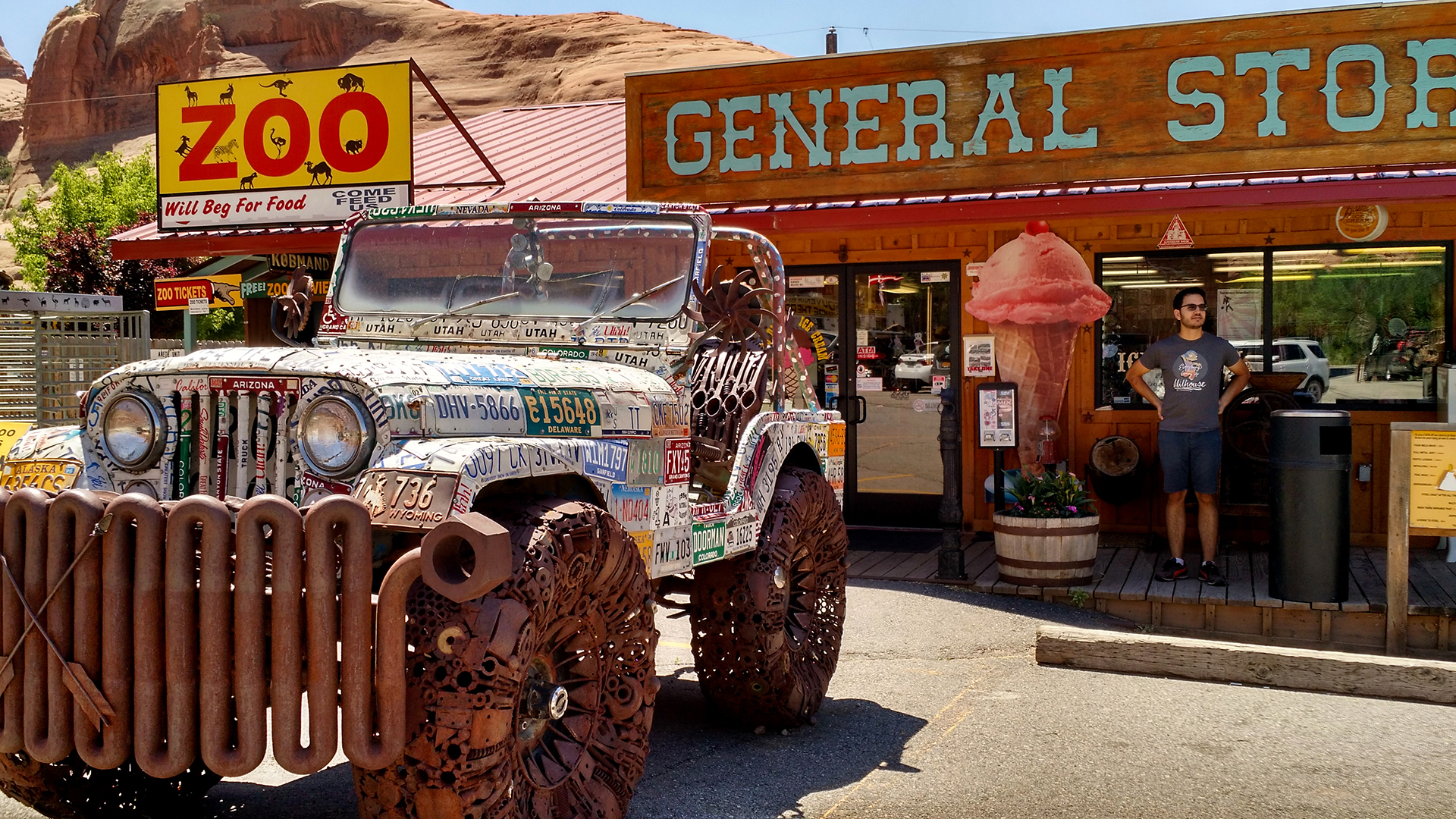 For some reason, Albert also got into taxidermy (a sentence that never ends well), and his first project was preserving his trusty mule for all eternity.  Today, it stands proudly in the living room, facing out the window.  We love the thought!  However, it may have been a little ambitious of a first project – the final product landed somewhere between “imperfect” and “nightmare made real.”

Hey, just like the 2016 presidential election, am I right?

A final reason we liked Moab is that we actually talked to some humans here!  There aren’t a ton of young people roaming the country in an RV, but all the ones who are use Instagram, so we’re online-friendly with quite a few couples like us.

In Moab, we met up with one such couple, Anna (@annamnic) and John, who are from England and were in the US for a year.  They were friendly and fun, and we swapped RVing stories – basically, “here are all the times we made a horrible mistake.”  We learned, for example, that it takes a shockingly long time to actually buy an RV in the US if you are normally from England.  In addition, if you’re abroad living off your savings, and your country bizarrely decides to leave the European Union and tank its currency, life gets… interesting.

In any event, it was great meeting up with them, especially since it came during a two-month stretch in which we saw literally nobody else we knew.  Pretty daunting, which is why we’re really grateful to all the people that followed along with us online during our trip.  It was like having hundreds of internet pen-pals!   We never really felt like we were alone.  And if you’re reading this, you’re probably one of those people, so – thanks!

Now bring it in for a hug.

We’ve reached the end of our roadtrip!  We’re settling down in Denver, but we’re going to keep making blog posts and posting our favorite photos from the trip, so stay tuned for more.