The White and Green Mountains of New Hampshire and Vermont are quiet places, with lots of nature but not a lot of people.  For our next stop, we headed towards the complete opposite: New York City.  We made it in one piece, but the trip there was anything but easy.

All Hail the Storm King

Our first destination was the Storm King Art Center, a sculpture park about an hour north of New York City.  The drive was pretty rough, as the bucolic rolling hills of Vermont transitioned quickly into the construction zones and potholes of Troy and Albany, New York.  If you’ve never been to Troy, it’s basically the crackhead younger brother of Albany, which is not so nice to begin with.  The roads in Troy were in terrible condition, but if you need to pawn something or get a payday loan, we recommend checking it out.

Storm King was extremely cool, however.  It’s a huge park with numerous installations, including some truly gigantic pieces set in grassy fields. 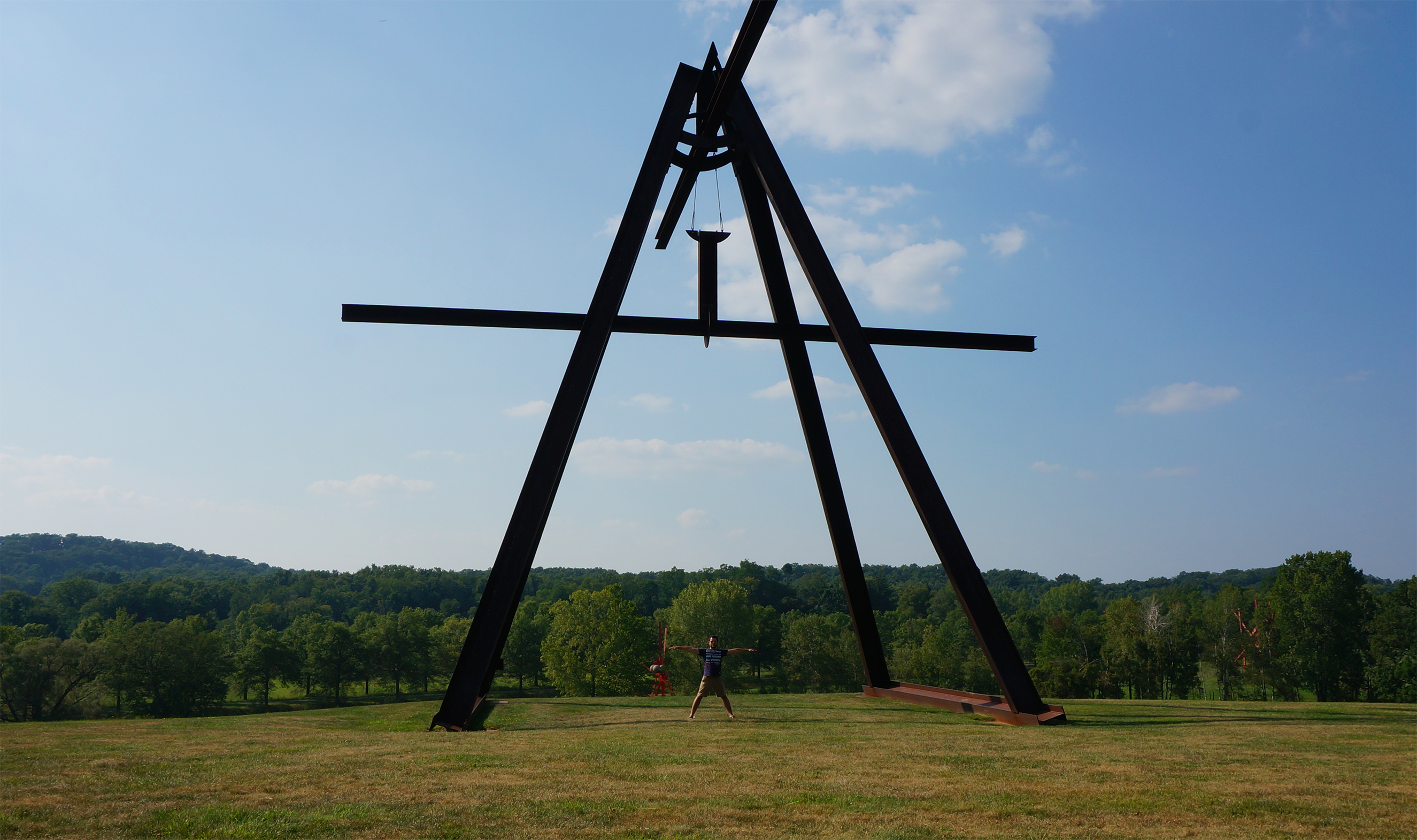 It was a little less intimate than the Stone Quarry Hill Art Park, but the scope is vast, and it features works by famous artists including Roy Lichtenstein, Alexander Calder, Maya Lin, Isamu Noguchi, Richard Serra, and many more.  Unfortunately, it was punishingly hot when we were there, but the upside is that almost nobody was around.  We may have seen more animals than people. 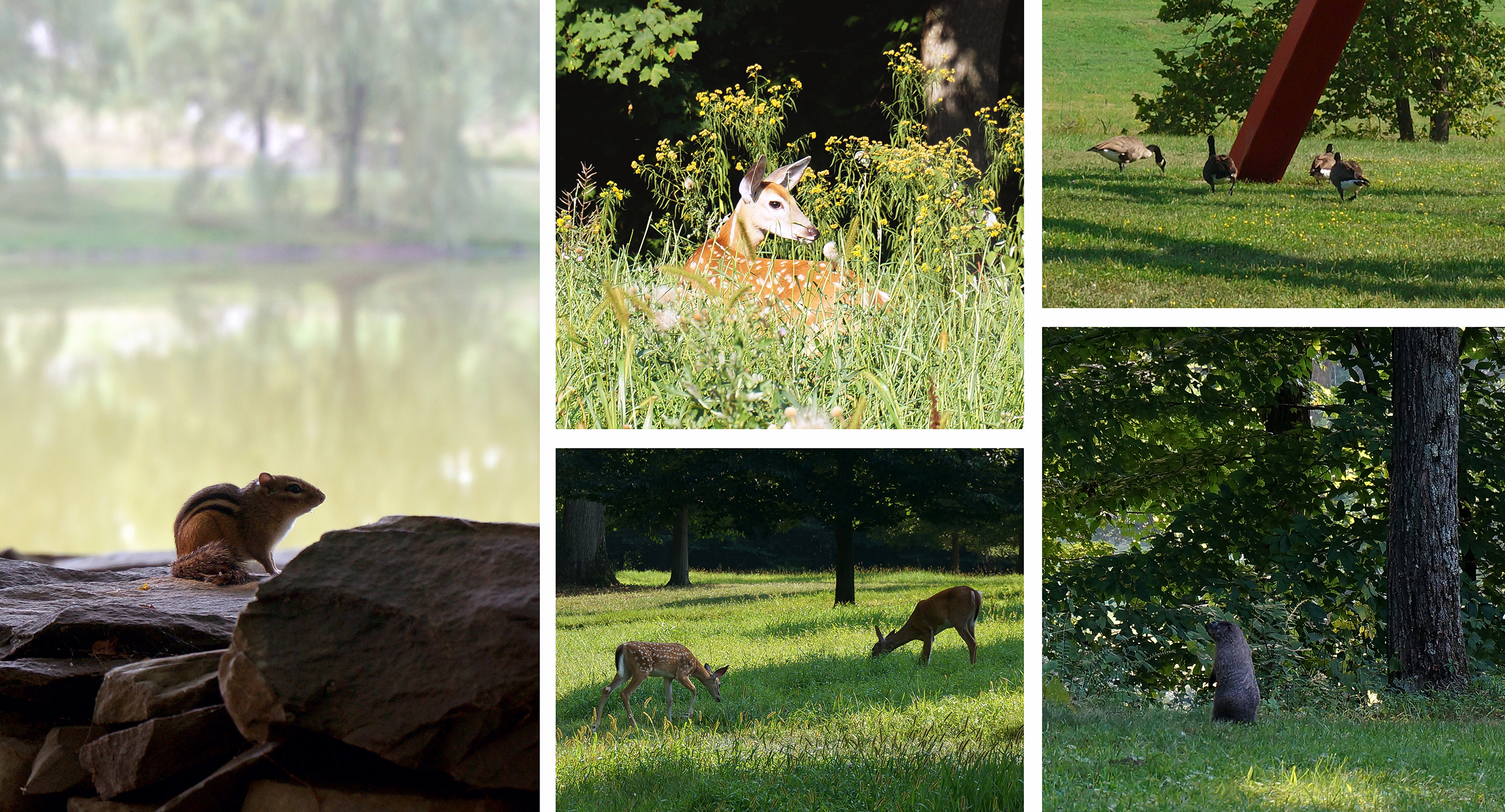 We’ve got pictures of some of our favorites below.  If you’re in the New York area, Storm King is well worth a look – it’s really spectacular, and you can take a bus from the city or drive in.  If we did it again, we would probably rent bikes (which you can do on-site), as the park is so big that we barely got to scratch the surface. 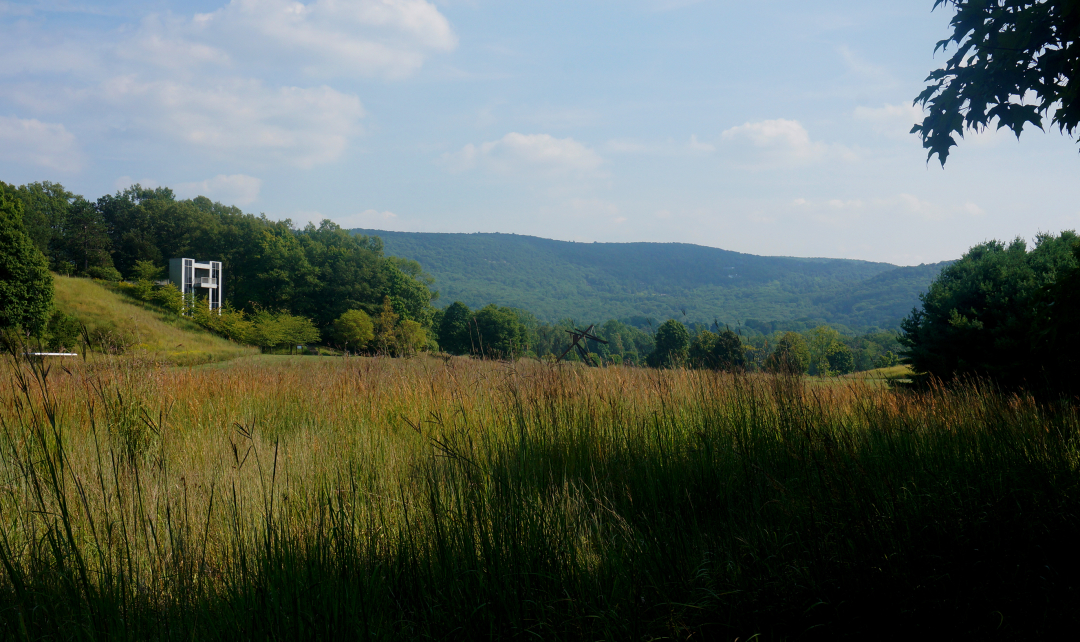 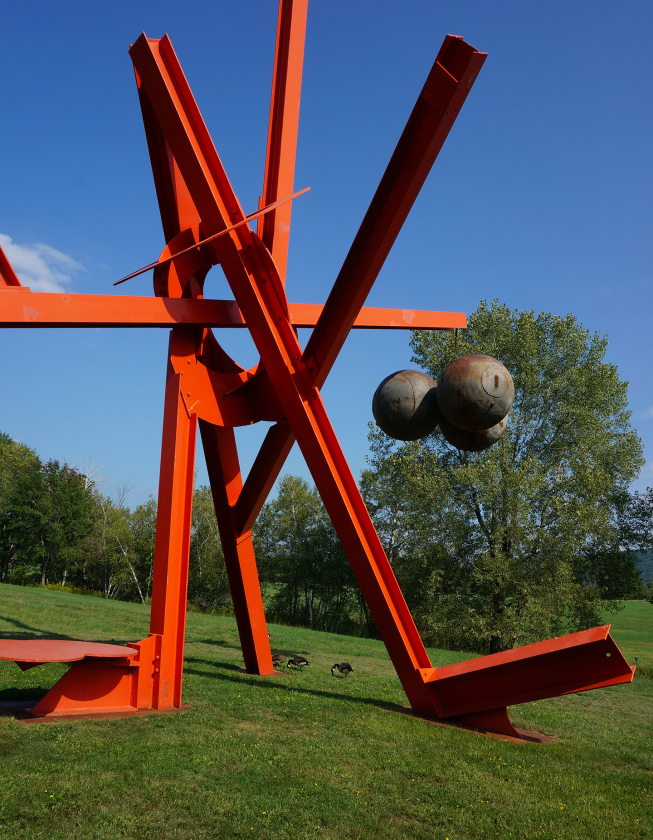 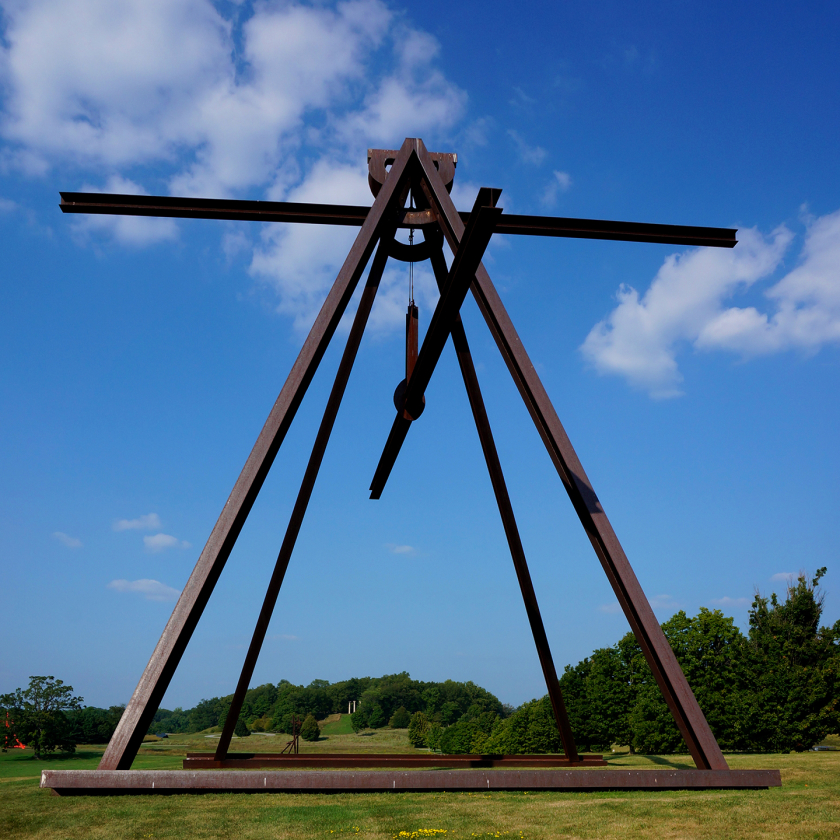 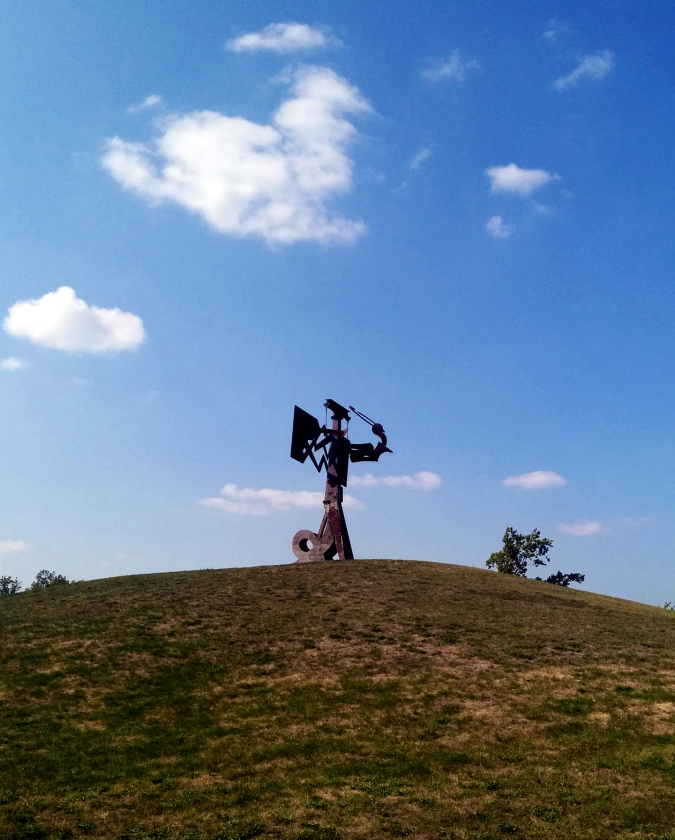 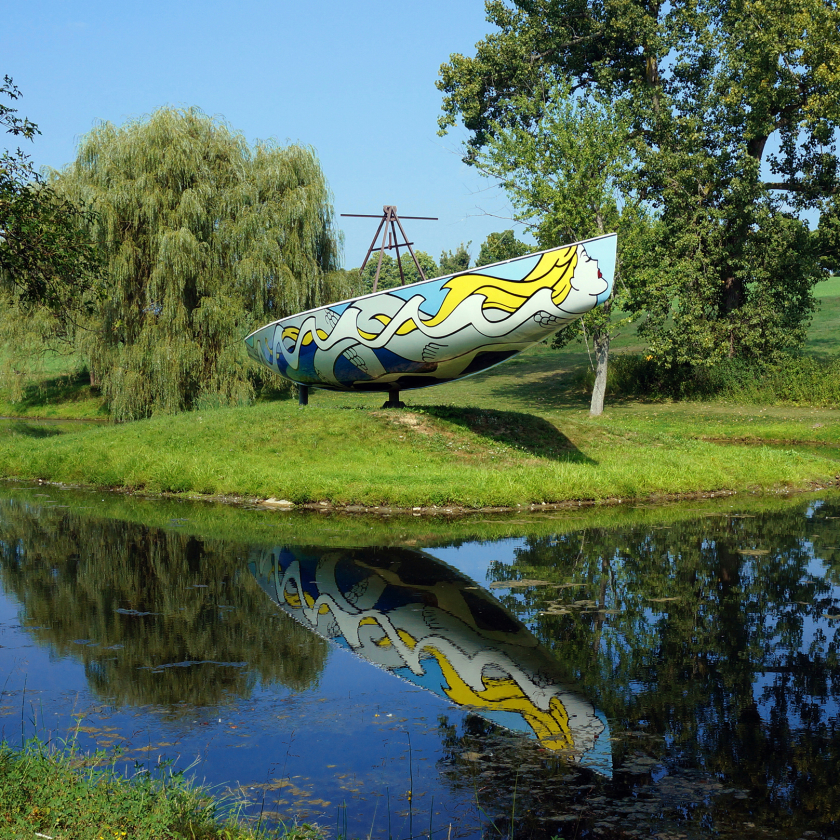 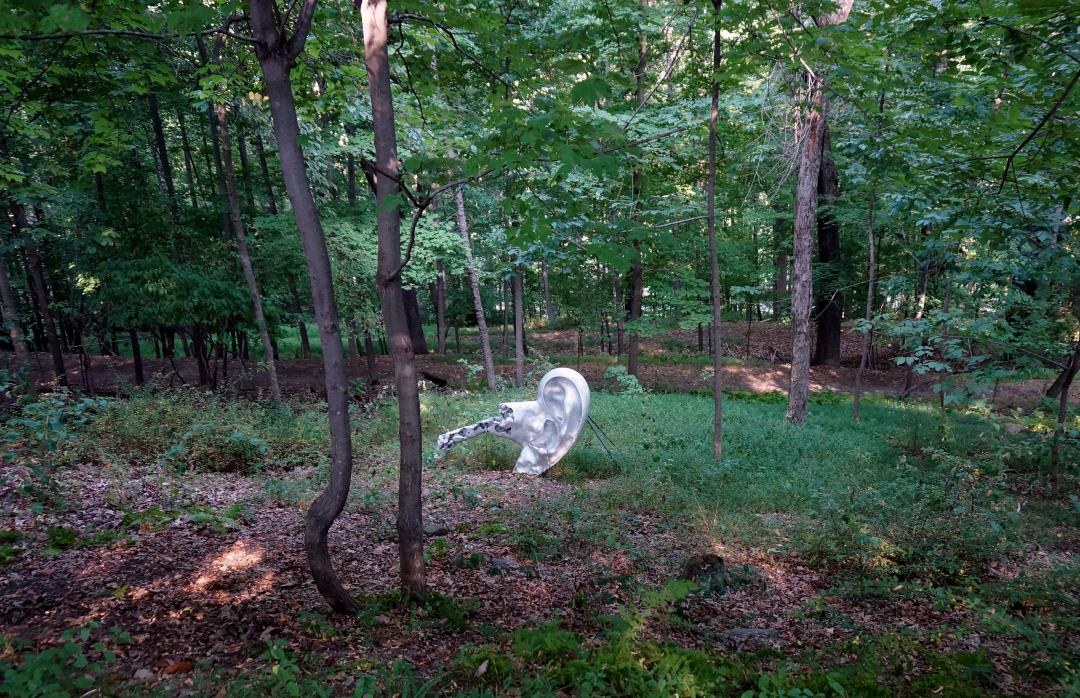 Also, we could have watched this sculpture do its thing all day long.

An Unexpected Side Trip

We left Storm King, which incidentally is the name of the town and not the local deity, and headed to a nearby Wal-Mart to stay for the evening – the same one we stayed at on our first night in our RV, in fact.  But when we got there, we found that our tow car smelled overwhelmingly of burned brakes – and to our amateur eyes, it seemed like the front brakes had been completely destroyed.

We’re still not completely sure what happened, but most likely there was a malfunction with the supplemental brake system installed in our tow car.  This is a big plastic box that sits in front of the driver’s seat in the tow car, and clamps onto the brakes.  When we push the brakes in the RV, the brake system is signaled to physically and proportionately push the brakes down in the tow car.  Considering the relative sizes and weights of the vehicles, this is kind of unnecessary, but we are required to have it installed under New York law.

The weird part of the brake system is that it’s not attached to anything.  It just sits in the driver’s side in front of the seat.  So what we think happened is that it rode slightly forward somehow and ended up pushing down on the brakes continuously, just a little tiny unnoticeable bit, maybe even for just the 13 miles we drove from Storm King to Wal-Mart.  This created enough heat to totally destroy the brakes – as the mechanic who replaced them said, “It’s not that your brakes were ground down.  It’s that they were burned to death in a pit of fire.”

Basically what happened to our brakes. (via GIPHY)

But the story of how we got to that mechanic is pretty crazy.   While examining the brakes, we found out the battery in the tow car was also dead, from the daytime running lights being on while the car was towed (we later disabled those).  Lacking jumper cables, we called for roadside assistance and asked the friendly responder about the brakes.  He agreed they seemed to be destroyed.  Then, without asking, he called a mechanic he knew who does auto repair work and had him buy replacement brakes, then told us to follow him over to get them fixed.  Now, it was dusk and we had had a long day, plus we were already at a place that fixes brakes (Wal-Mart).  Also, according to Google Maps, the place was 45 minutes away – but the responder insisted it would be only 15 minutes, and peer-pressured us into following him there.

Of course, it actually was 45 minutes away, through deep darkness on actual mountain roads – the route went around the peak of Bear Mountain.  It was terrifying driving, especially since we were pretty new to driving with the tow car.  Driving the RV at night is always scary anyway – it just doesn’t have the ability to stop like a normal car, so the lack of visibility is stressful.  When you’re hauling a car with no brakes up and around steep, curvy, and completely unfamiliar roads, to an unknown mechanic who you are starting to worry may be planning to rob you, the stress level is… heightened.

Even our cool hat didn’t make us feel better. (via GIPHY)

But we did eventually make it!  At 9 p.m.  And the mechanic was good, cheap, and fast, and he didn’t try to rob us even once – although he only accepted cash, and was located in a locked, gated business park in an extremely sketchy area.  He actually offered to let us sleep in the RV outside his shop overnight, but we saw a few too many “ladies of the night” around for that to be an attractive offer.  Although, according to the mechanic, it was safe because “the cops drive down here constantly…”

After staying at a different Wal-Mart than the one we intended, we finally made it to our campground for the week – Voorhees State Park in New Jersey.  Because these were apparently our unluckiest 24 hours, this park – right near the interstate – turned out to be basically on top of a mountain.  After twisting and turning our way up there, Google Maps attempted to send us under a very low bridge that would have ripped off our roof.  Luckily we noticed and turned off in time, and the path we then took happened to be the only reasonable way there. 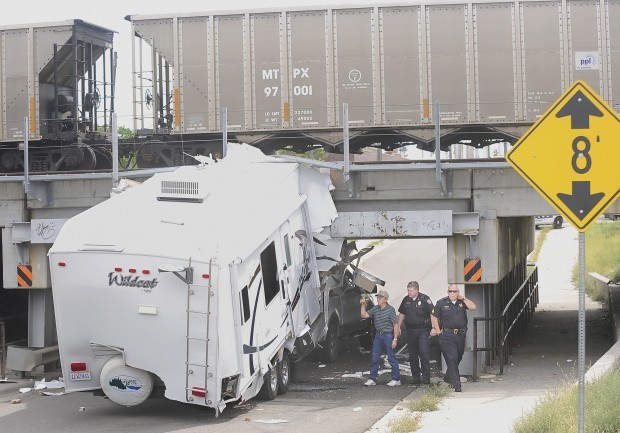 The campground itself was nothing special, but there was something special about it:  it was totally deserted.  The bathrooms were closed for construction and there were no other hookups, and apparently, everyone else just stayed away.   At times, we were the only people in the entire park, which has at least 80 camp sites.  Of course, staying by ourselves in a place which shares a name with the killer from Friday the 13th – and which has active bear warnings – was a little unsettling, but frankly, we weren’t really staying there either.  We just needed a quiet place to park our RV while we headed in to “The City” for Labor Day weekend, and Voorhees was great for that.  No hockey mask required. 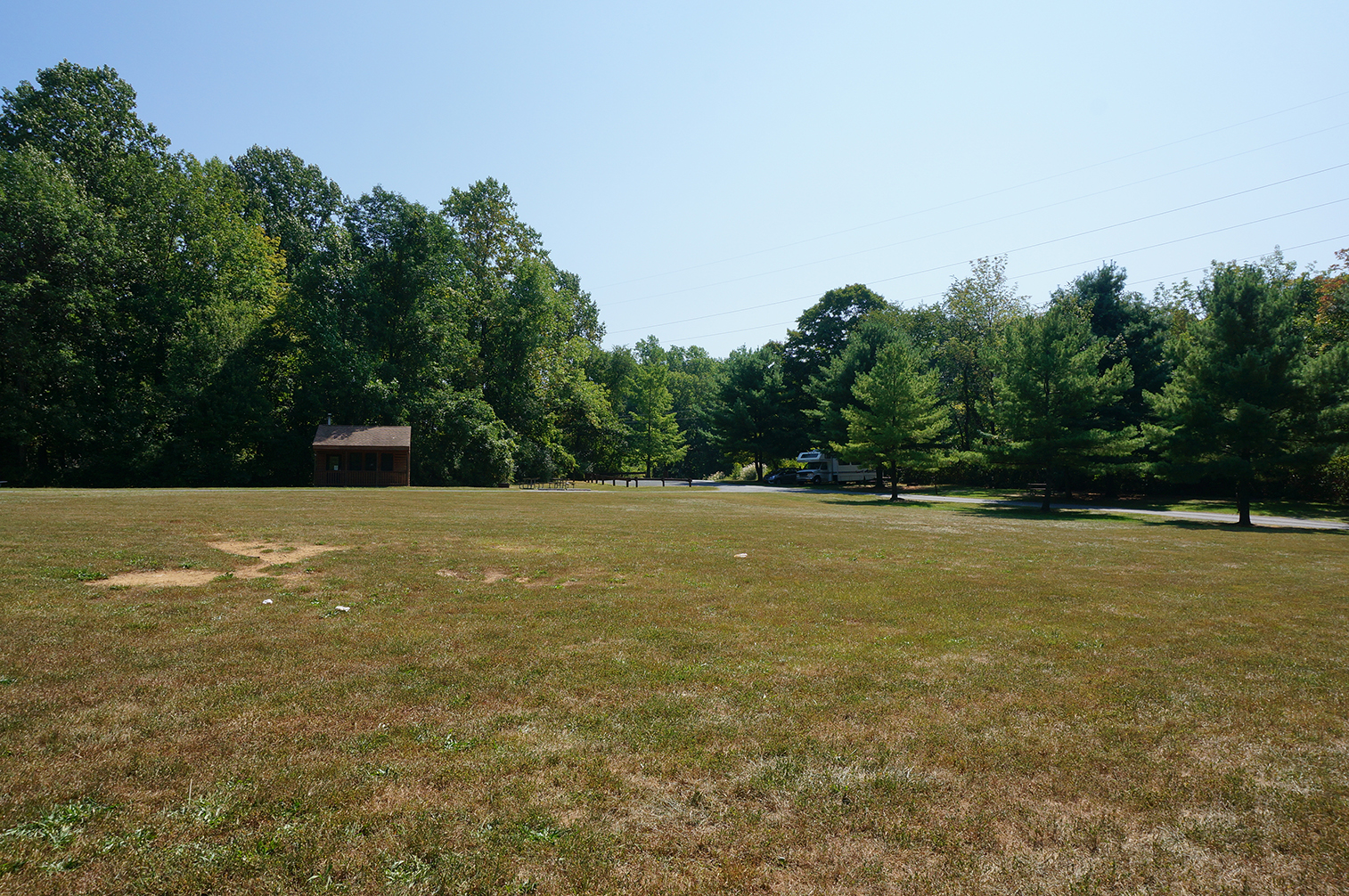 You can see our motorhome in the back if you look closely, and… nothing else.

Eating Our Way Through The Big Apple

As former New York City residents, we didn’t do much touristy stuff while we were there, instead taking the chance to see friends and eat some great food.  Our friend Brian and his girlfriend Kim put us up, and put up with us, for the weekend, and we got to revel in the decadence of 24 hour grocery stores and Seamless.com.  We even made the trek all the way to Brooklyn for Smorgasburg, a giant weekly food fair, which is always horribly crowded but incredibly delicious.  We ate way too much, way too fast, and paid way too much for it (lousy NYC…), but it was awesome. We also had lunch with Jake’s Dad, and met up with a lot of old friends and some old co-workers.  We also got to have some wholesome family fun with the Browns again (of Maine fame).  We rode the carousel with Kaia (and our friend, Alex), and smashed some blocks with Captain Rhea.  All in all, it felt a little bit more like home than we expected – although we’re still unsure whether it will be our next home. Speaking of old friends, on our last night in New Jersey we stopped by to visit Jake’s college roommate, Mike, and his wife and two young kids.  They were cute!  But we forgot to take pictures.

We also got lost in a strip mall parking lot where almost none of the roads actually lead out – the New Jersey version of a hedge maze.  The legends say that on a moonless night, you can still see the ghosts of dead shoppers trying to make their way out at Christmas.

This is probably what happened to Jimmy Hoffa.

What’s next:  Currently, we are staying at Jake’s mom’s house in El Paso, Texas, where the wifi flows like water, which incidentally also flows freely.  There are some benefits to houses that never move!  We are doing some heavy renovations to the interior of our RV, so stay tuned.