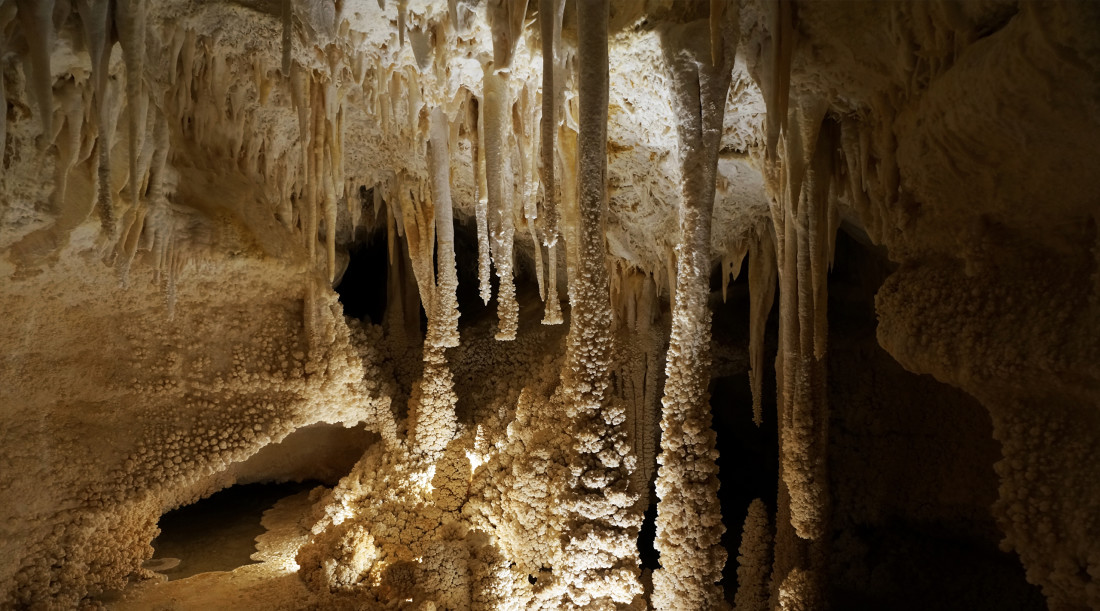 Week 16.5: Down Under at the Caverns of Sonora

After playing around in Austin and visiting friends in San Antonio (twice!), it was time to head west, away from the population centers and into the vast Texas desert. Of course, Texas is huge, and since our next stop was about 500 miles away, we decided to stay overnight  at a spot we read about online – the Caverns of Sonora.  We mostly just needed a place to sleep, and the Caverns have RV parking, so we figured we’d do a little sightseeing and kill two birds with one stone.  However, the Caverns turned out to be more spectacular than we ever imagined. 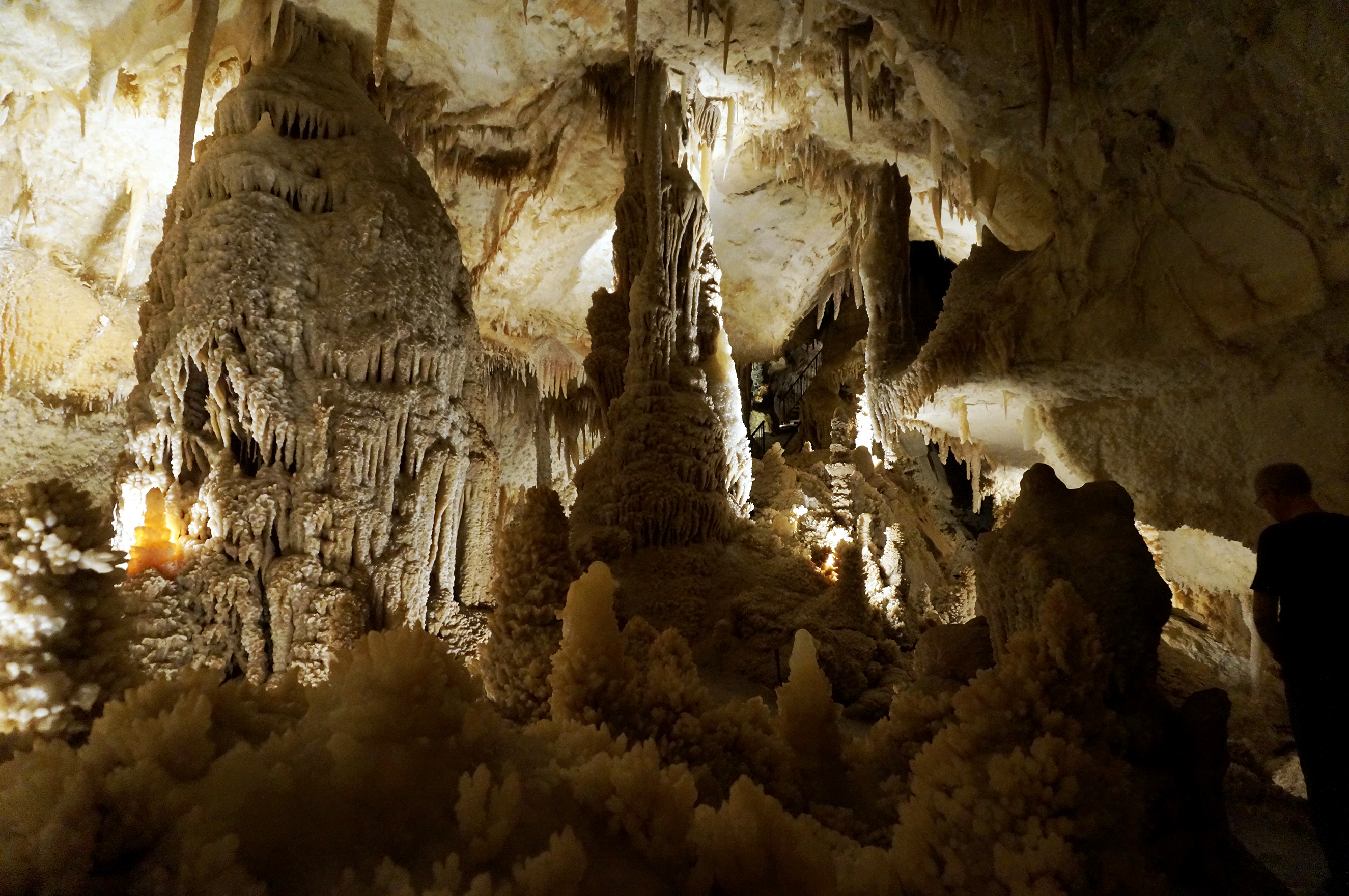 Now, we have visited quite a few caves, so it takes a fair amount to impress us.  The Longhorn Caverns we visited near Austin were nifty, and their history is cool, but the cavers were mostly bare rock.  There were a handful of cool cave formations – pieces of oddly-shaped rock that look like a fish tail, or a really pretty stalactite, or some cave “popcorn” – but the density wasn’t very high.

At the Caverns of Sonora, on the other hand, all of those cave formations (and many others) were present in extraordinary density.  In places, nearly every square inch was covered with something beautiful.  It was really incredible, a preposterously dense accumulation of wondrous natural decorations in every imaginable shape, size, and color.  There were even thousands of helictites, extremely rare structures in which the rocks grow at crazy and seemingly-impossible angles. 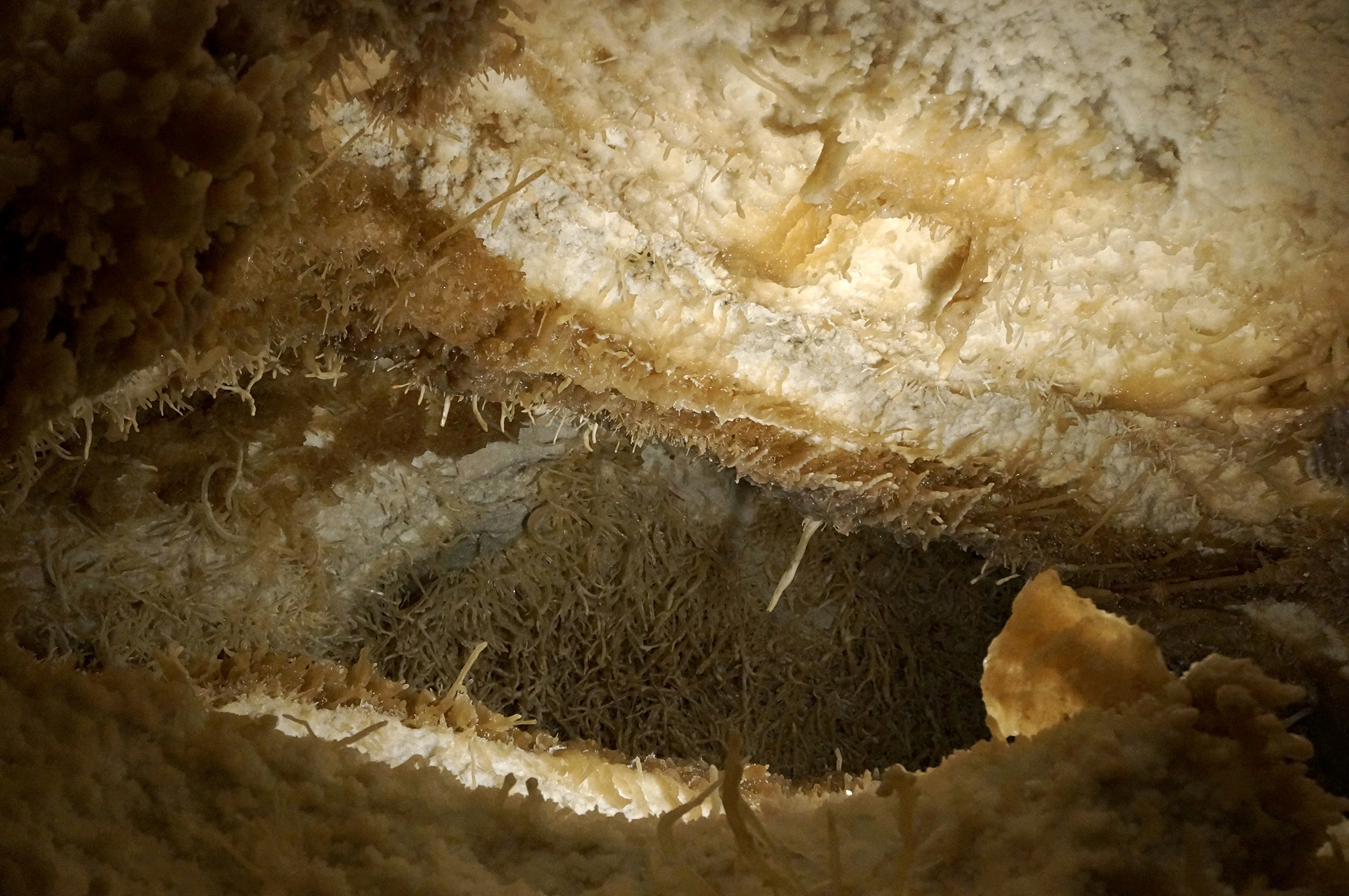 The photo above is from a section dubbed the “Snake Pit,” and there are more helictites in that picture alone than in all but a handful of caves in the entire world.  But as we said, that’s not all you can find in the Caverns of Sonora.  Here’s one of our favorite cave decorations:  cave bacon! 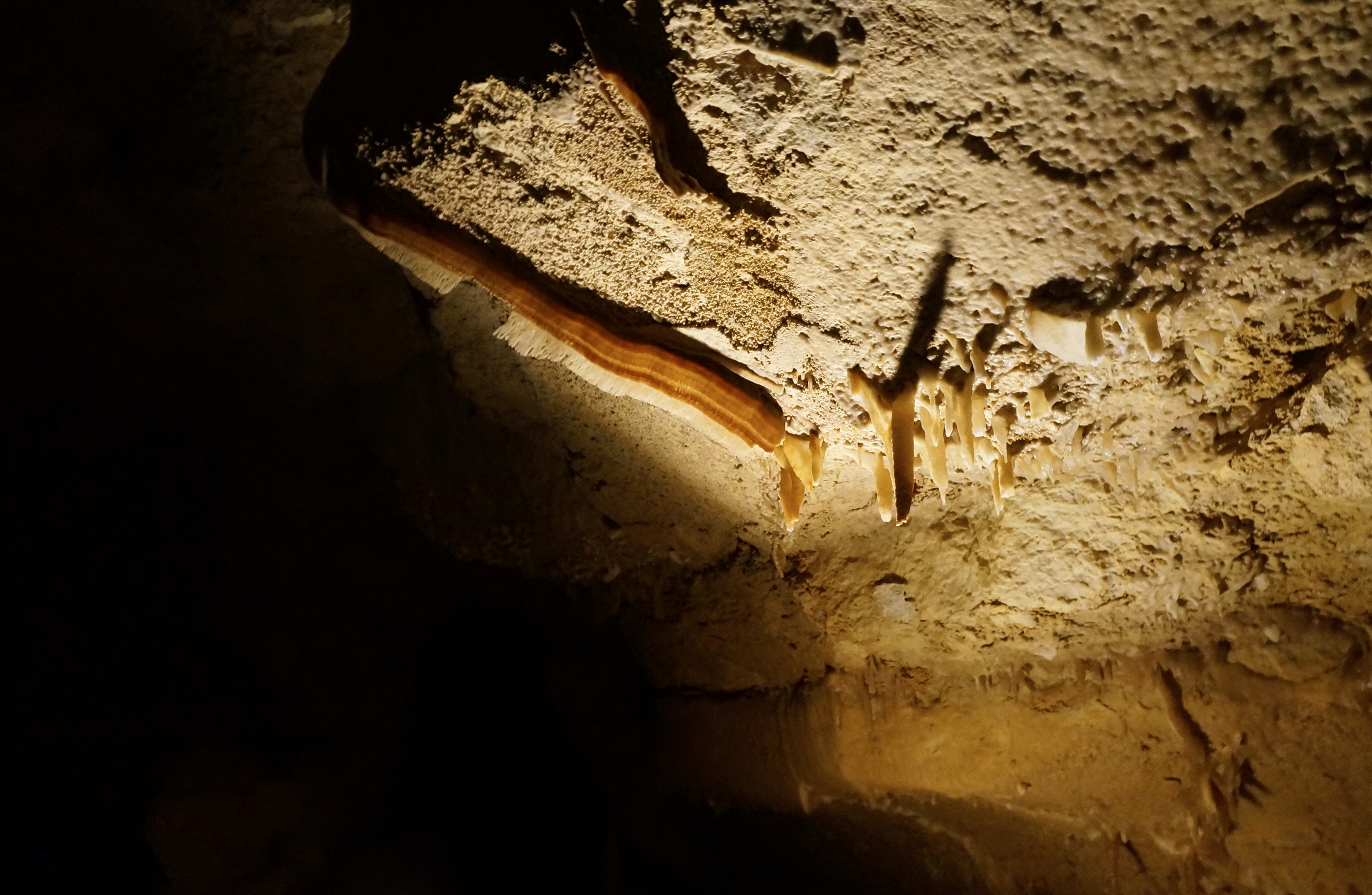 By the way, we had planned to shoehorn this visit into our previous post, but once we started looking through our pictures again, we just couldn’t do it.  The Caverns are a magical place, and it deserves a little extra love.  So, we’re going to eschew our usual format, and just take you along as we show off some of what we saw there.  Unfortunately, the pictures don’t really do it justice, since caves are dark (and we’re amateur photographers at best), but hopefully you’ll enjoy!

We stayed overnight at the Caverns, so we were in the first tour group the next morning.  That group turned out to consist of… us, and a tour guide.  We therefore ended up getting our own personal tour of the Caverns, a rare pleasure which we certainly appreciated.  We got to go at our own pace, and as introverts, it was satisfying to walk through the underground beauty mostly in silence.

The Caverns grow grander as you descend.  Near the beginning of our tour, the walls were still visible, with some cave decorations visible. 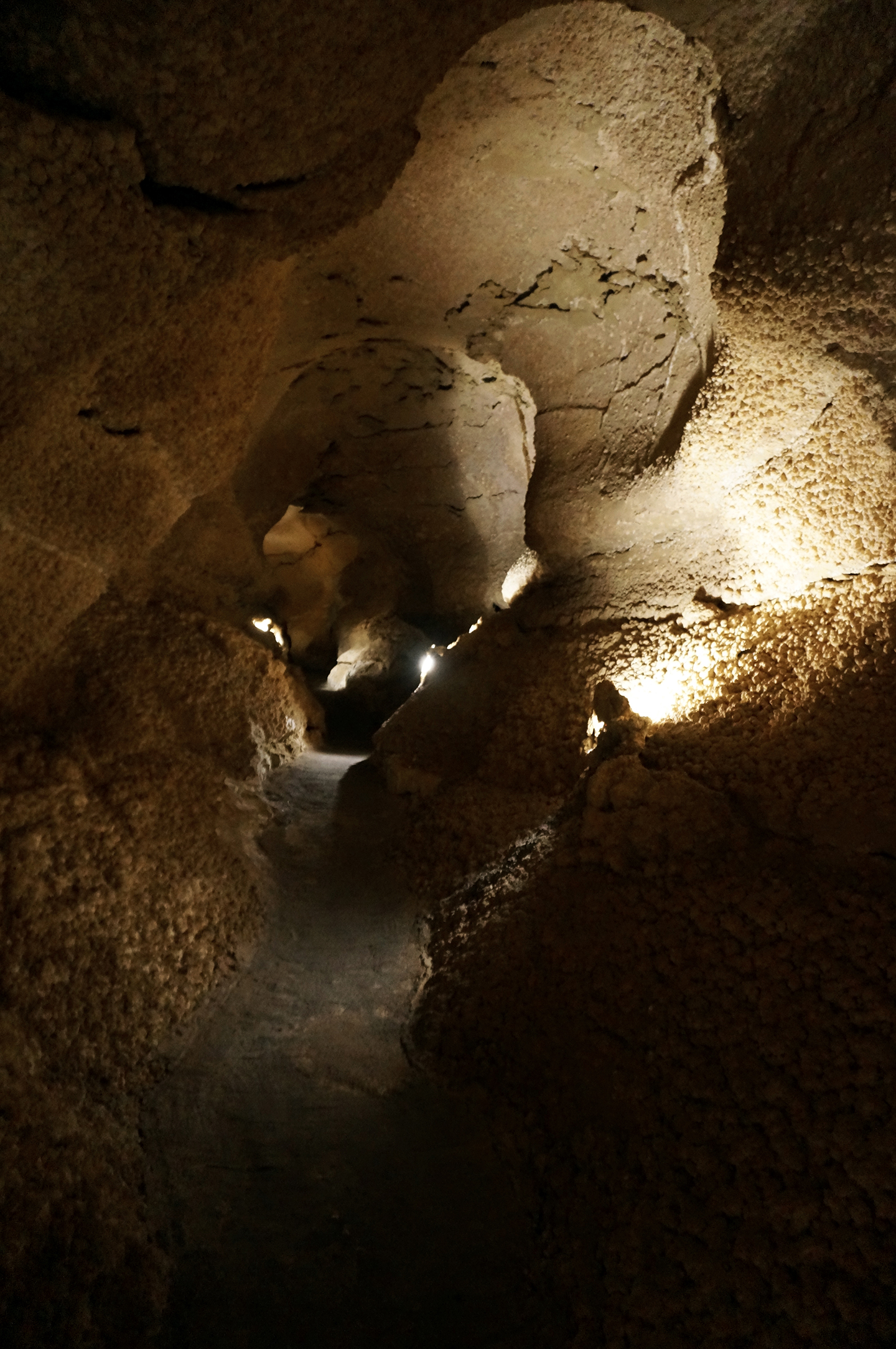 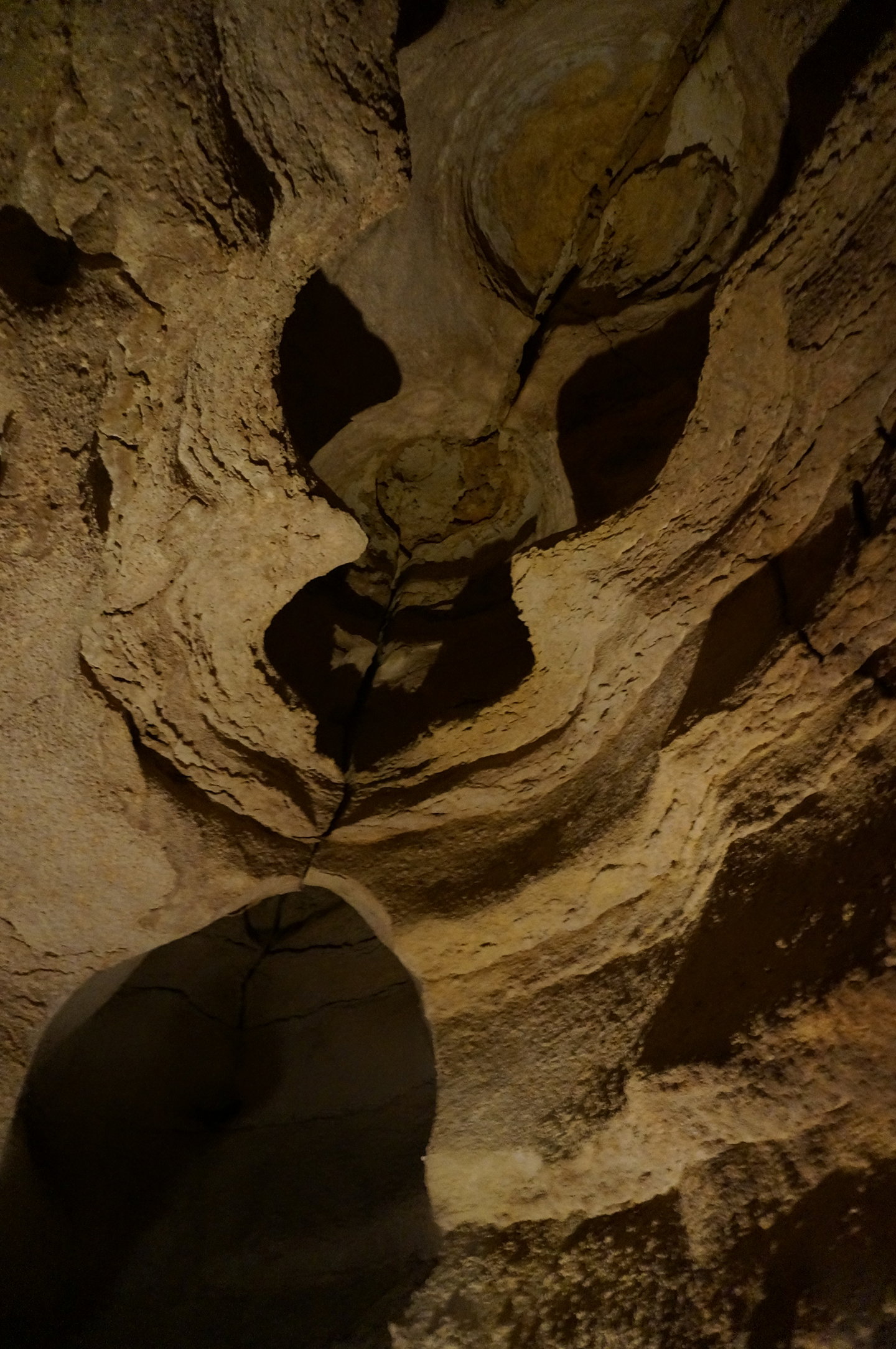 The most noticeable decoration is cave popcorn, which looks like exactly what it sounds like.  It’s rock, but it’s bright white in comparison to the other decorations, and amazingly fluffy looking.

We continued to descend.  In some places, the walls were lined with cave popcorn.  The air inside the caves was warm – it’s a constant 72 degrees Fahrenheit inside – but moist. 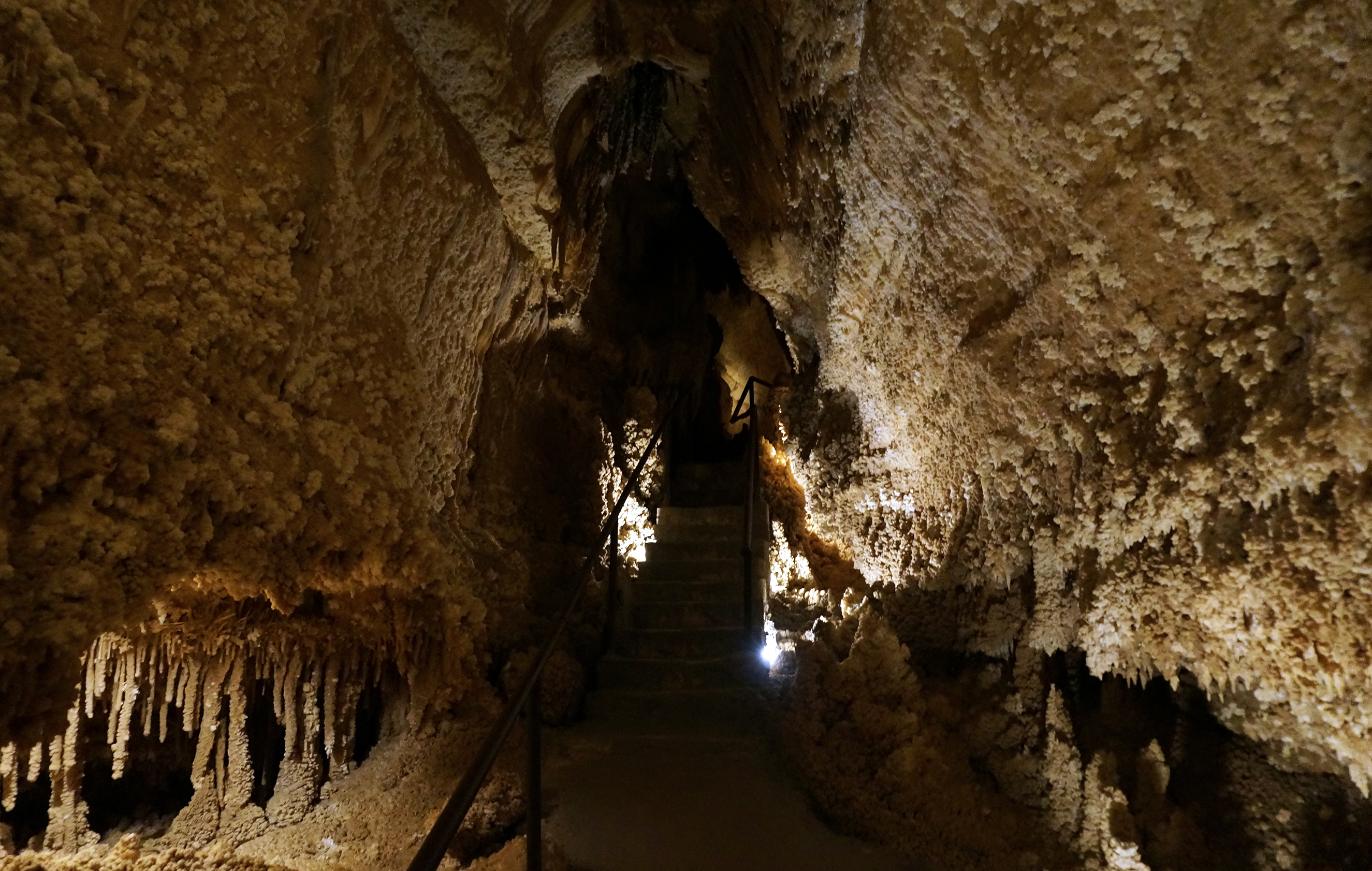 The cave decorations became denser as we descended.  Stalagmites and stalactites, covered with what looked from a distance like carpet.  Up close, the bumps revealed themselves to be millions upon millions of tiny formations. 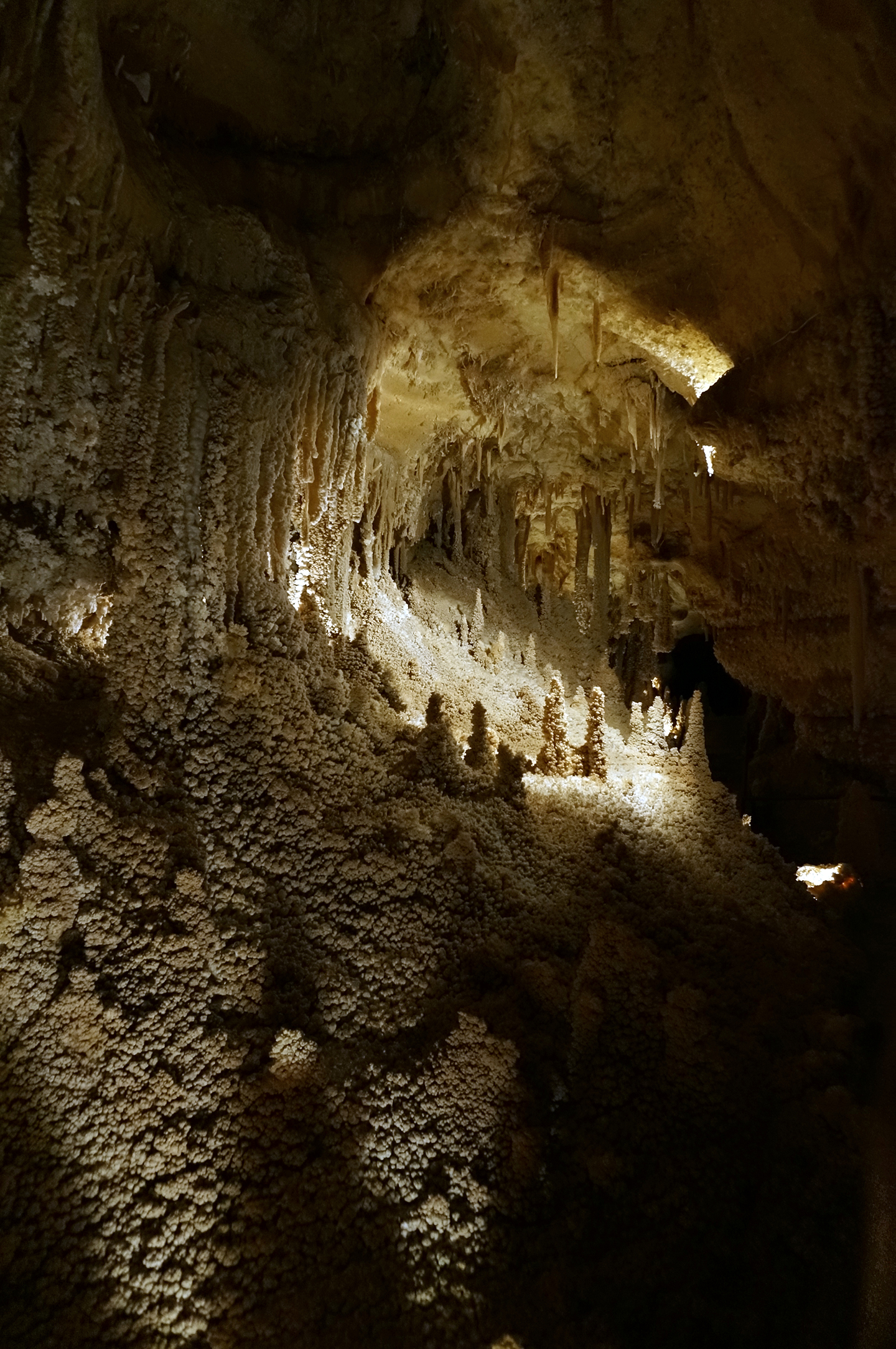 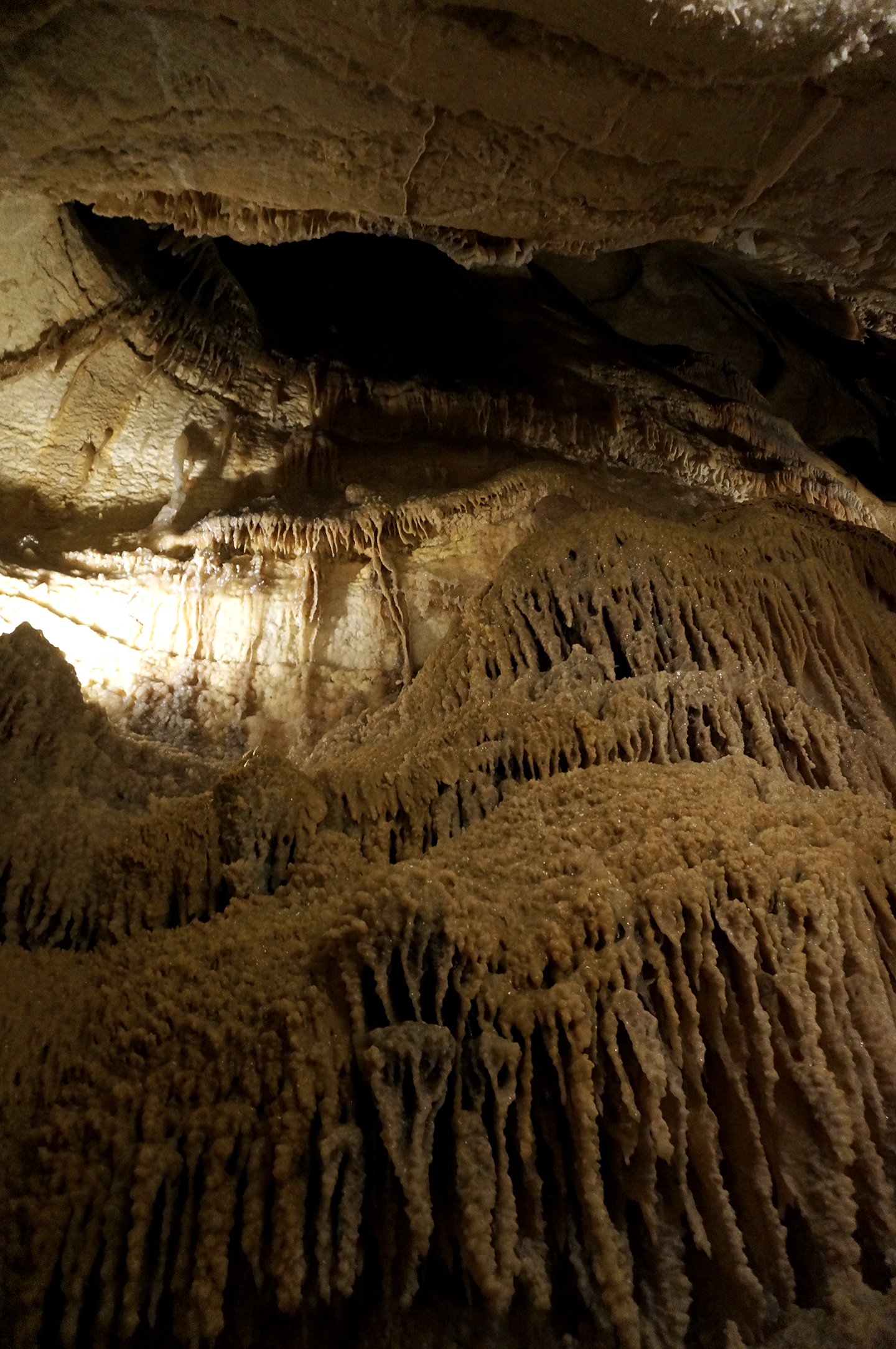 Soon, every step was past a wall bursting with beautiful formations.  Everything in the Caverns is just a different shade of the same off-white, porcelain color, but no less arresting for it.  Candles, pine trees, snowflakes – your brain cannot help but see patterns in the chaotic depths. 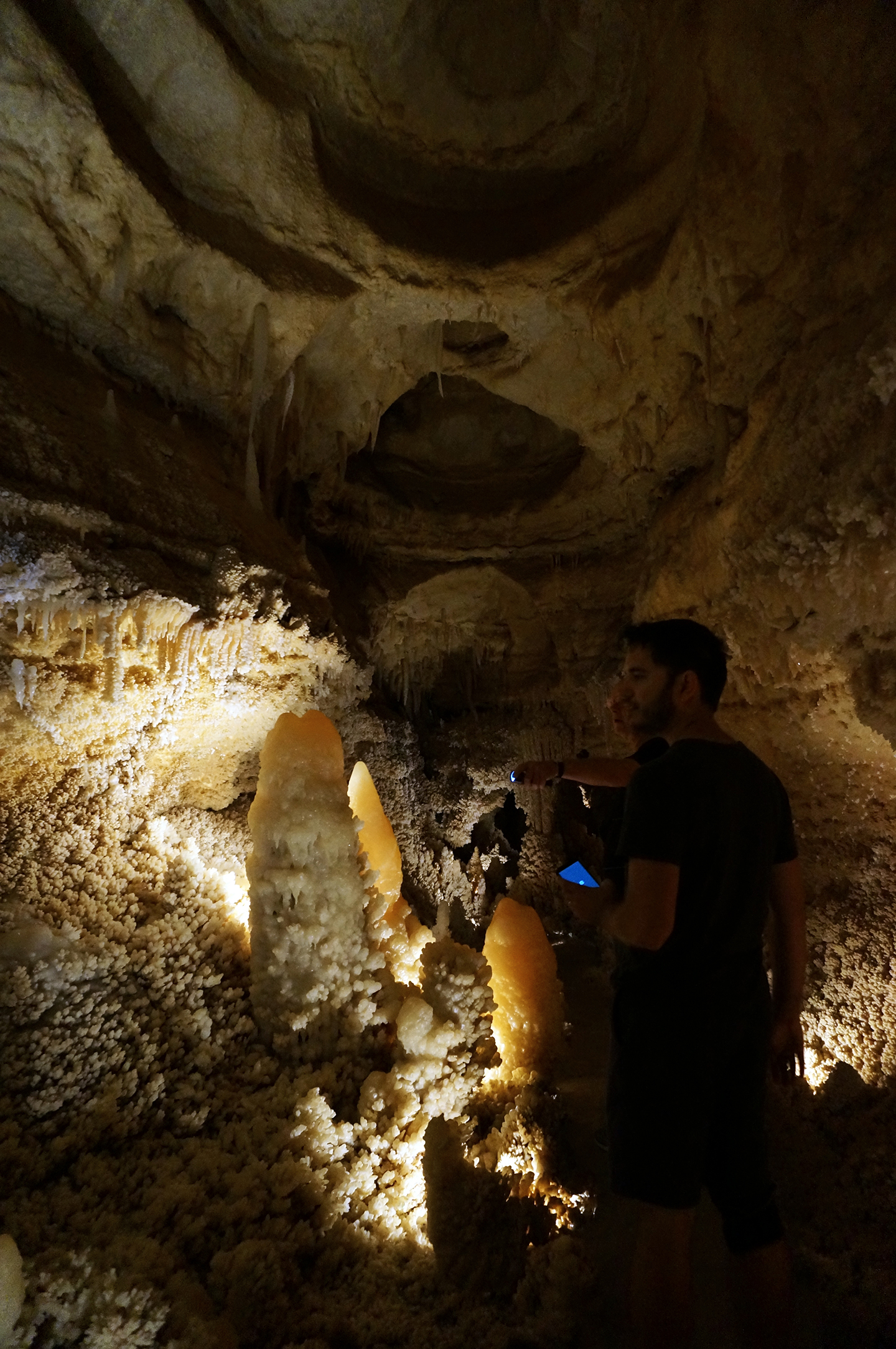 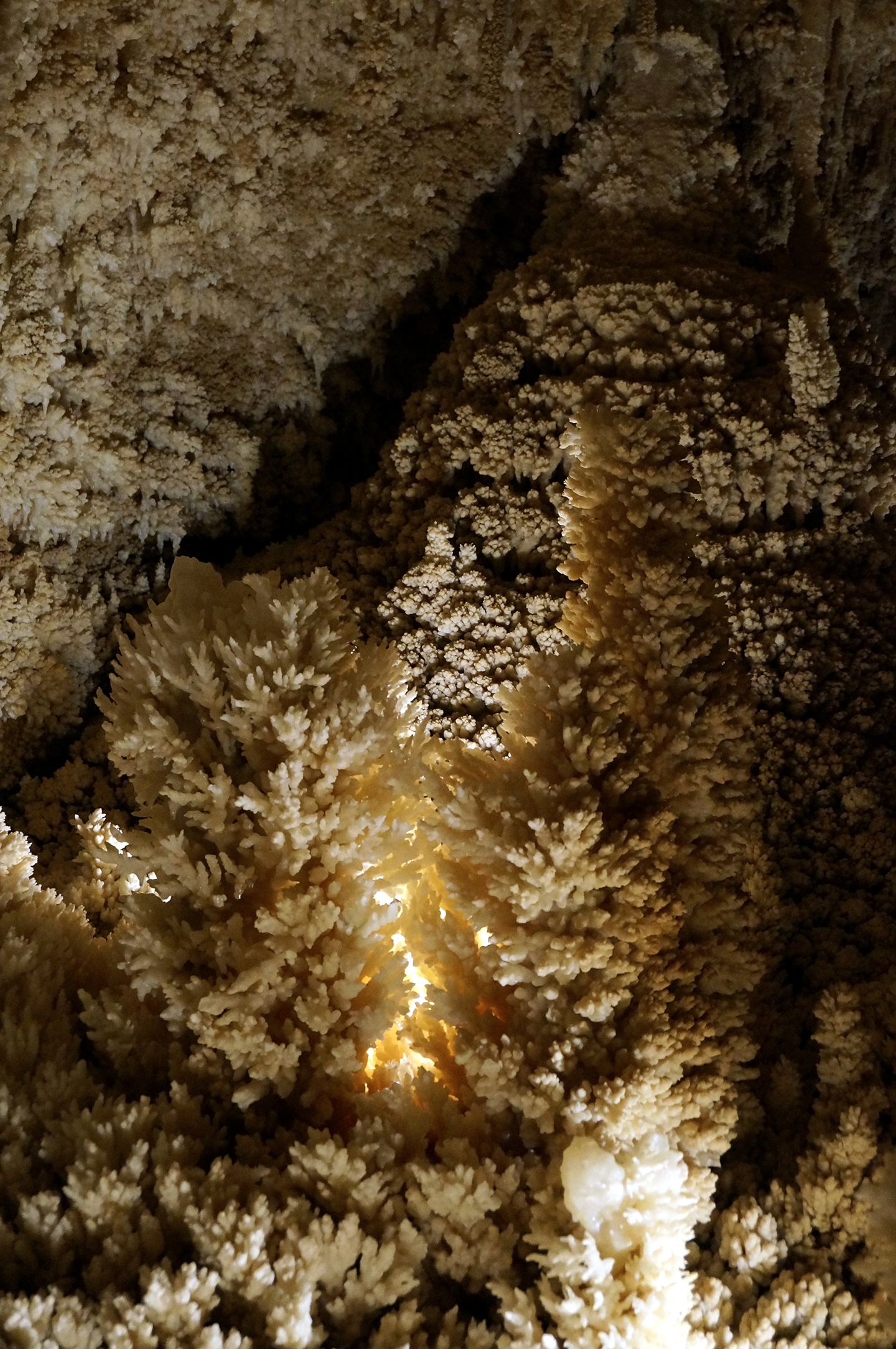 This is Nature’s sculpture garden, an infinite gallery of mineralogical wonder, and we were a guest on her tour. 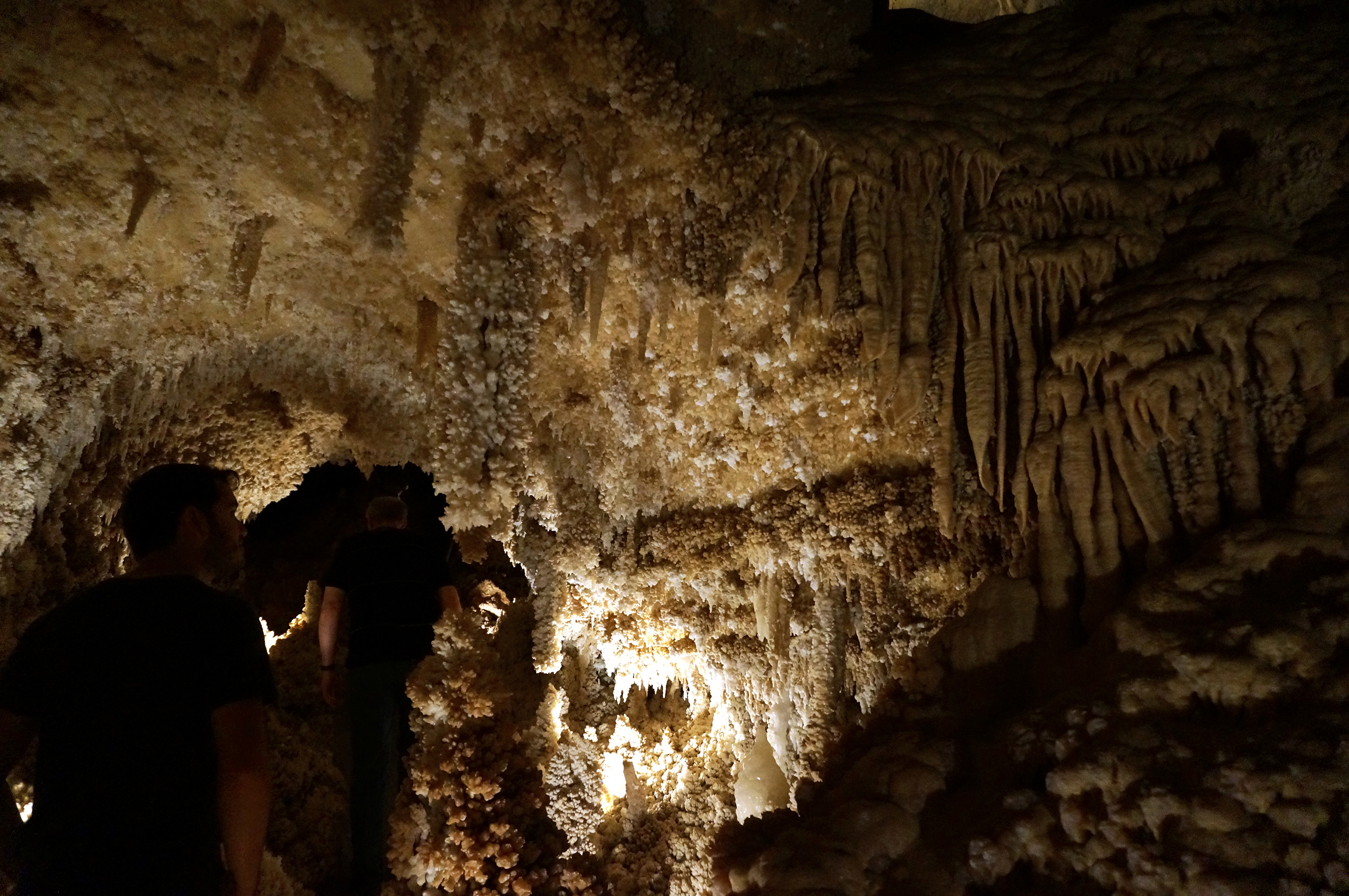 Our tour guide shows us an underground pond, so crystal-clear it is nearly invisible.  In places, this pond is one hundred feet deep.  It takes decades for water to reach it from the surface. 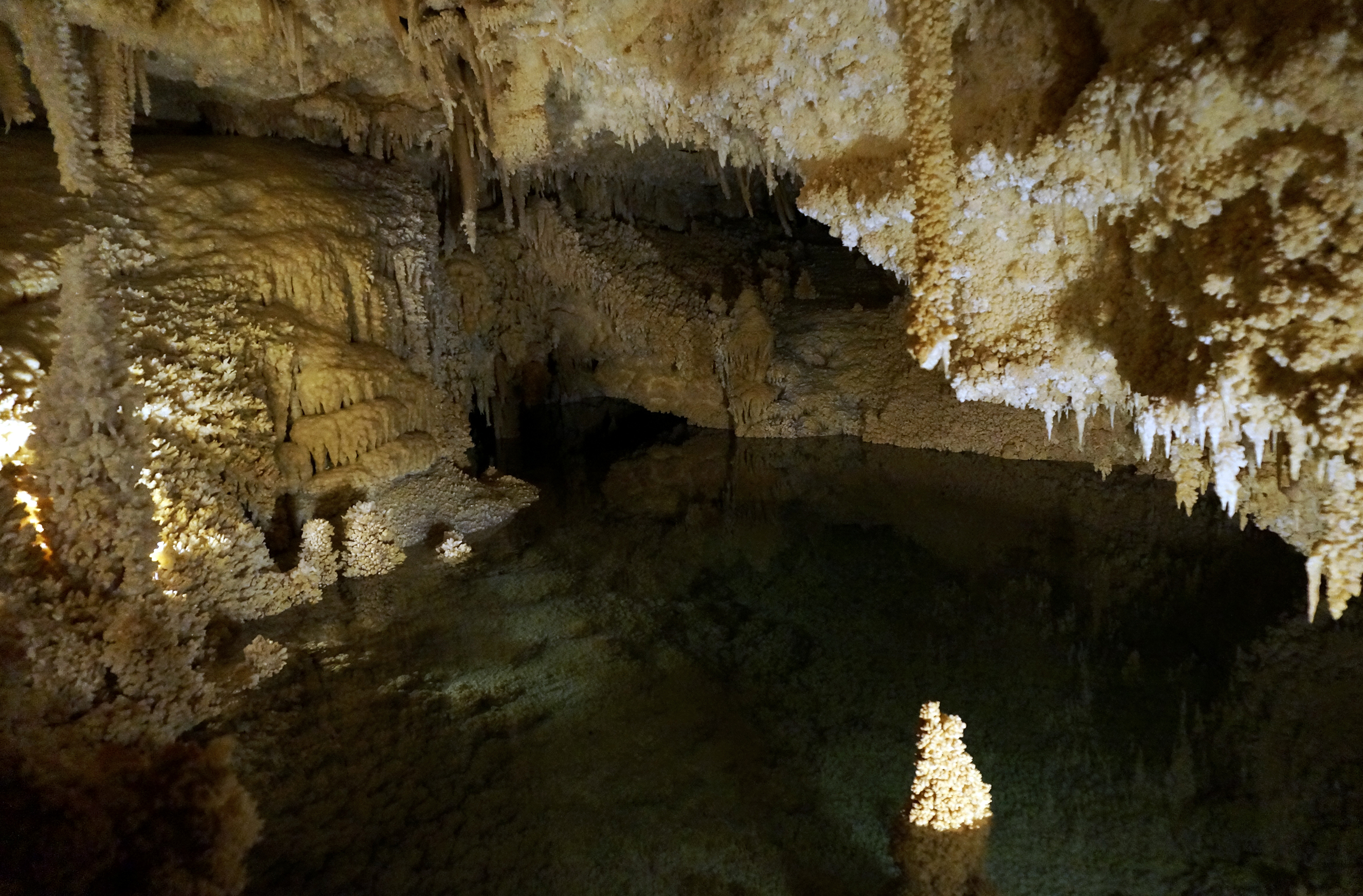 Soda Straws:  long, delicate tendrils, like skinny icicles, hanging down from the ceiling.  It feels like the slightest breeze would destroy them all; but of course, there is no wind this deep underground. 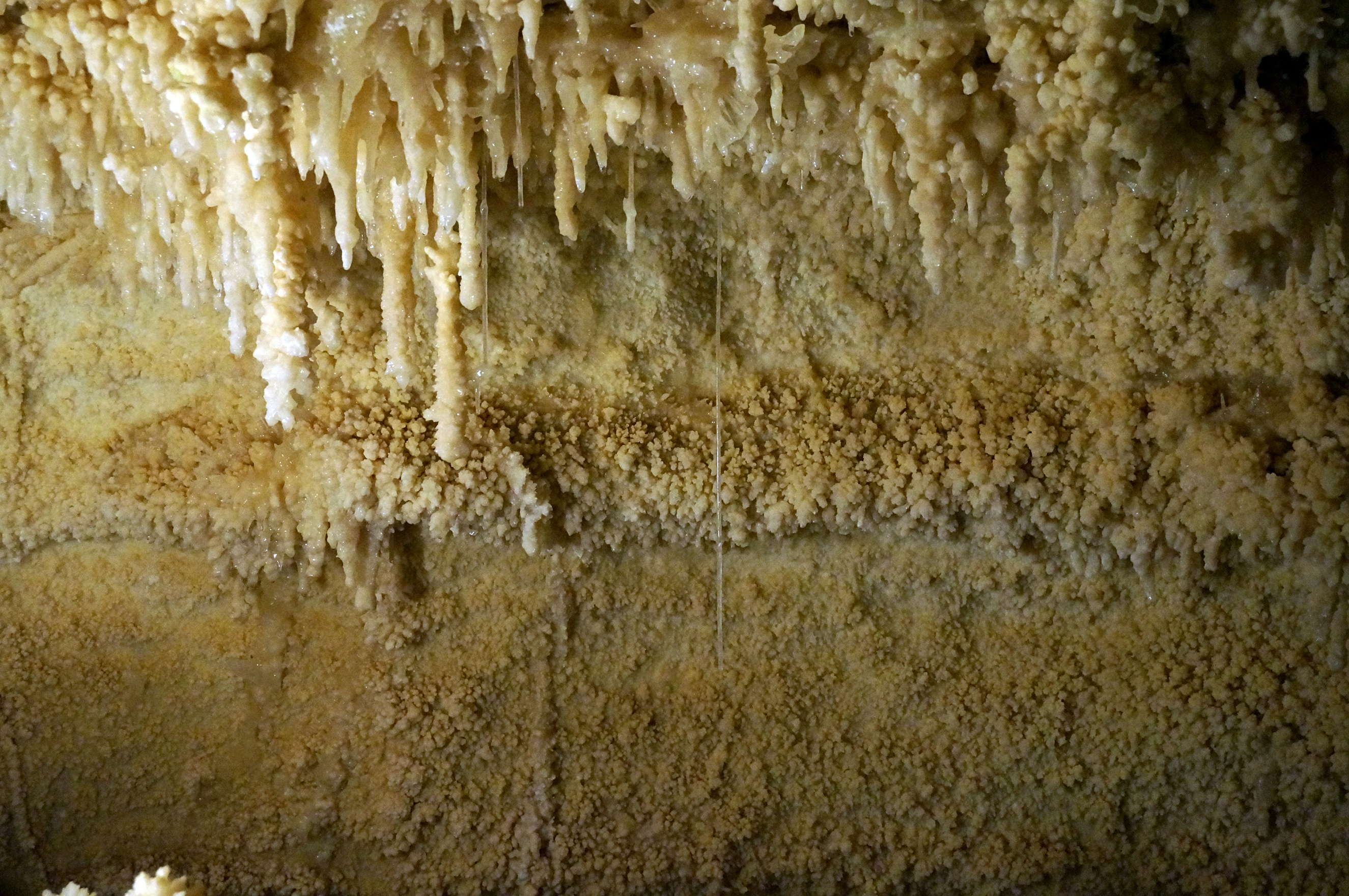 Soda straws soon surrounded us, like a rainstorm frozen in flight.  Mounds of flowstone covered the ground, lumpy like mashed potatoes, or dripping candle wax.  (There’s more in the gallery slideshow.) 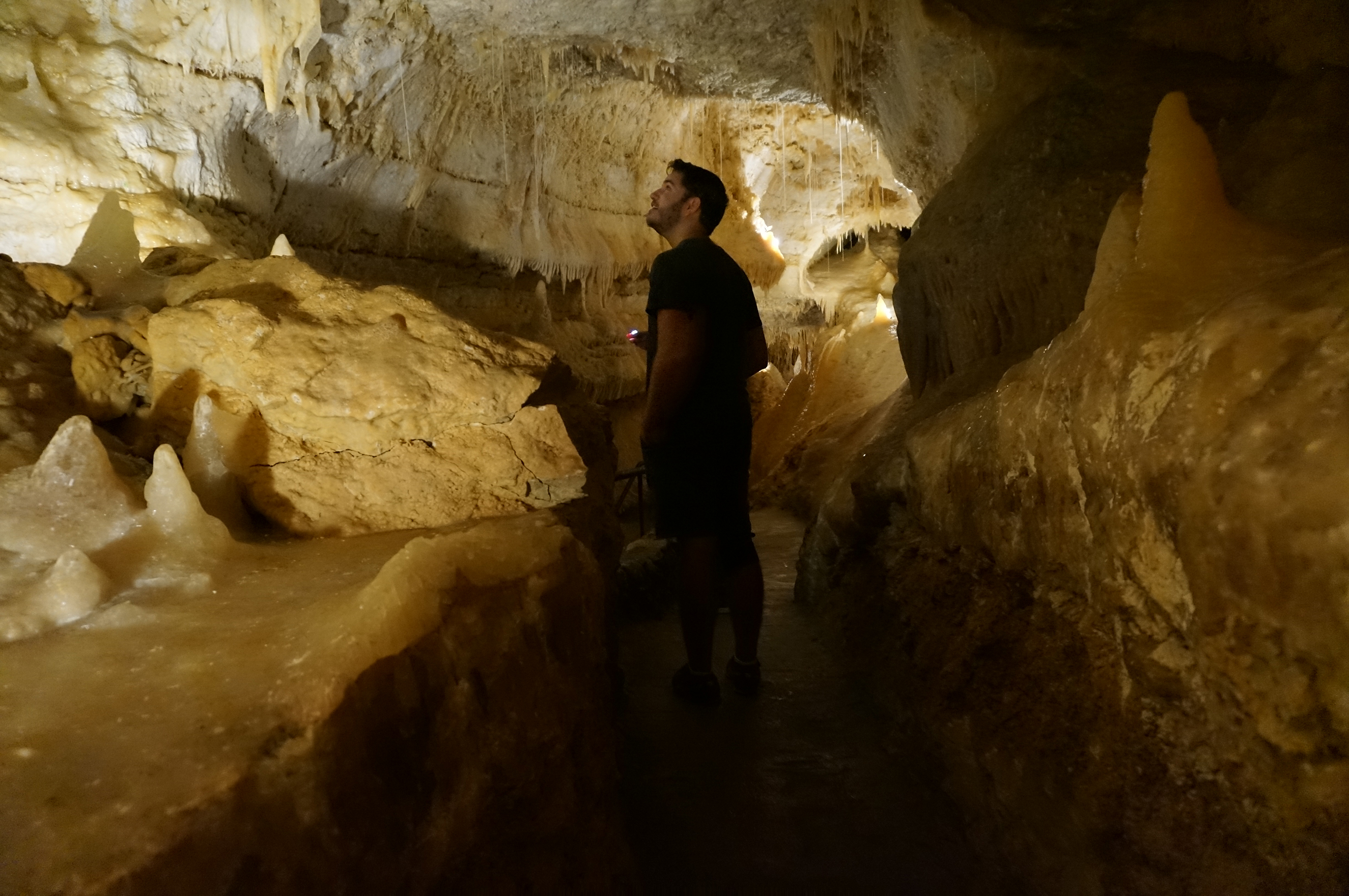 Near the bottom of the caverns, we entered the “Hall of the White Giants,” so named for its huge white rock formations.  (We aren’t 100% certain, but believe it was the area below.)  Our tour guide told us that because of the delicacy of the formations in this area, groups are only taken into to see the white giants about once every 4 months.

In fact, because the area is so active and the decorations continue to grow, the opening to the Hall of the White Giants is slowly being closed by nature.  We are lucky and humbled to have seen it before it is gone for good. 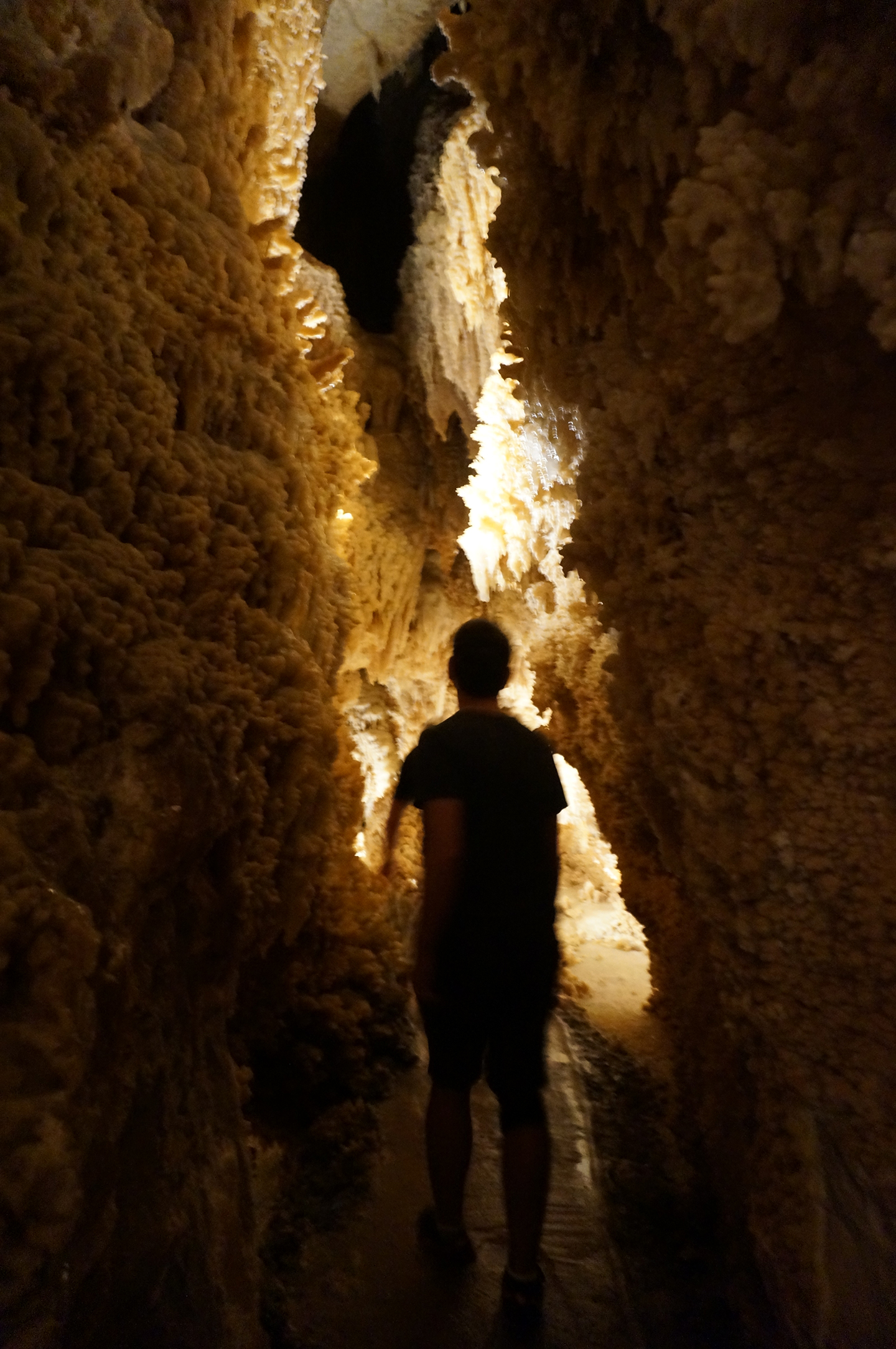 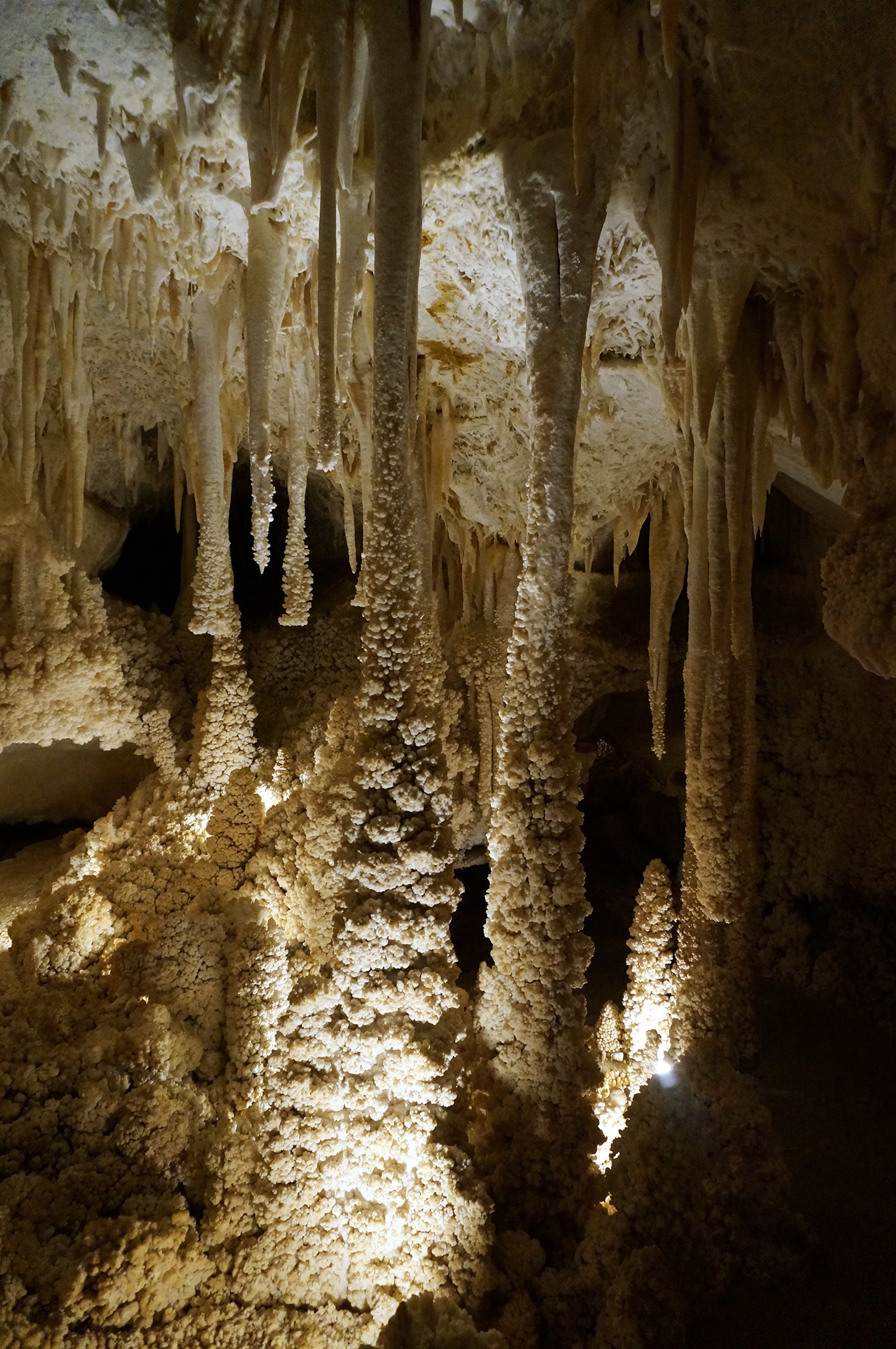 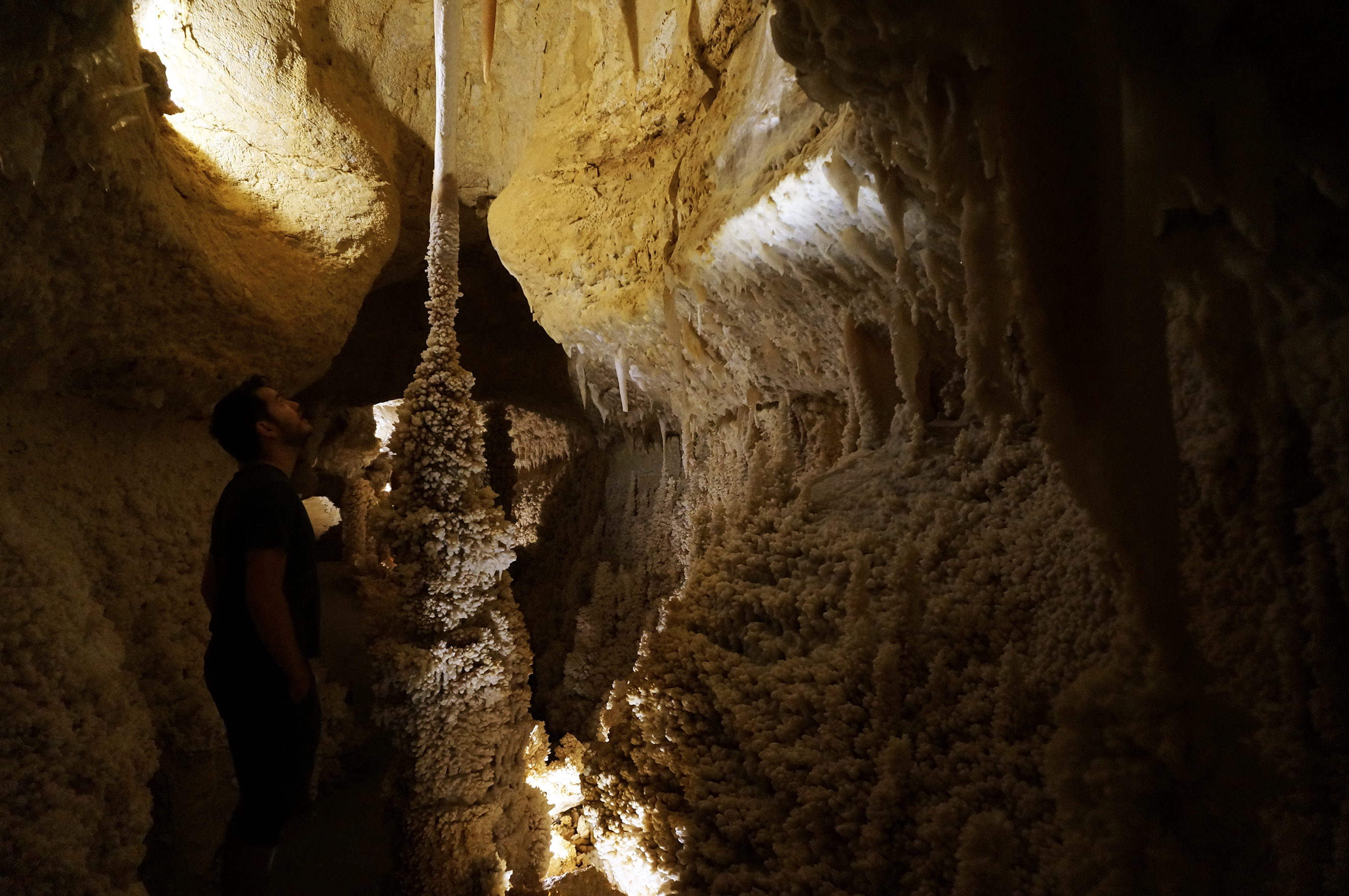 Towards the end of our nearly two-hour tour, we became almost numb to the crazy beauty on display all around us.  For the same reason, we will not try to show you all of our favorites, but we put together a slideshow below with a few more you may enjoy.

As we ascended, we passed again through layers of different types of formations.  Near the top, the walls changed to a smooth, white limestone. Like everything else in the Caverns, it was beautiful. 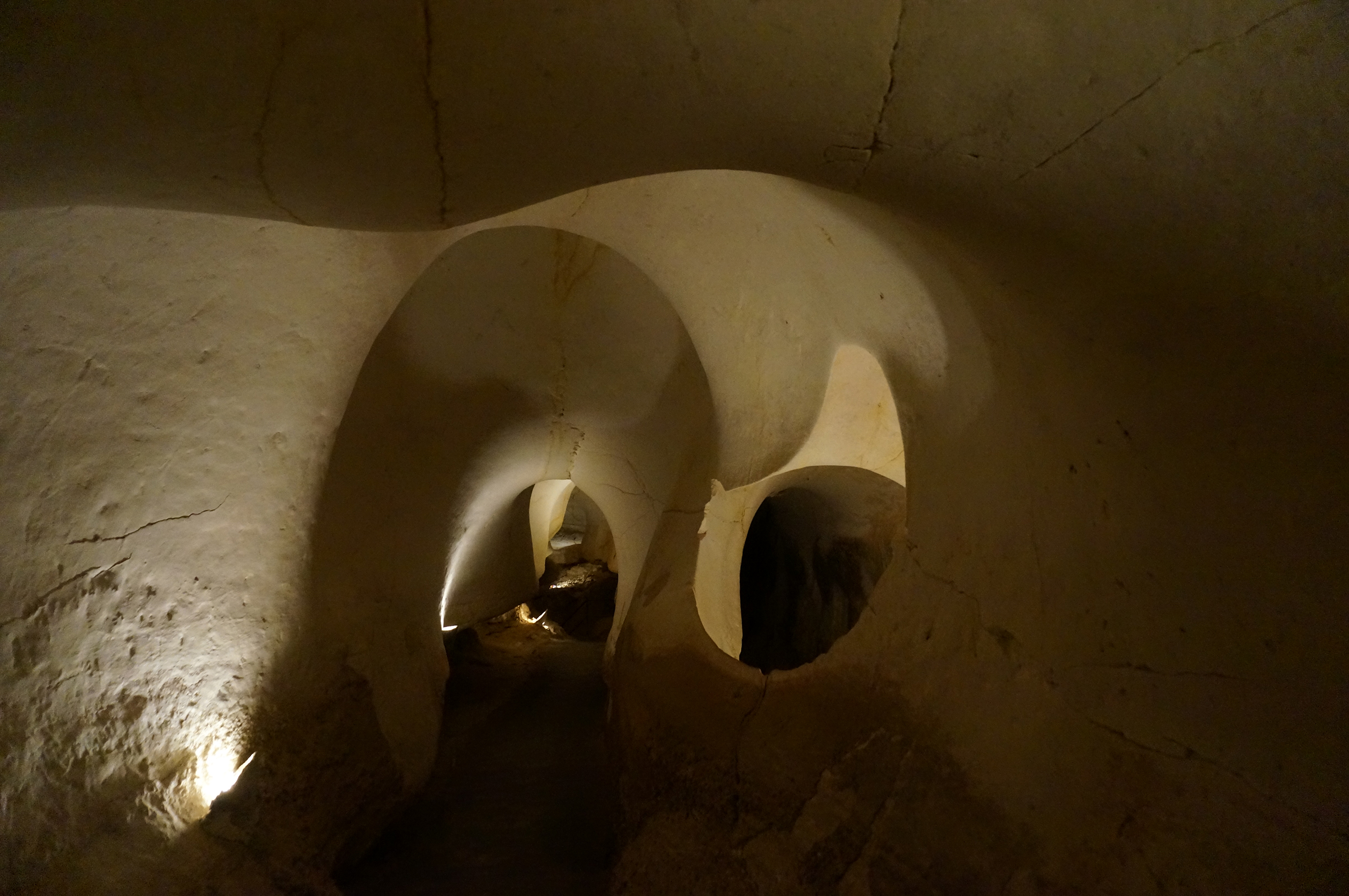 After such a magical journey, returning to the regular world was jarring.  We finally re-emerged into the Texas morning sunlight, blinking, and struggling to capture what we had just seen.  We have been lucky enough to see many wondrous things on our trip, but few can compete with the Caverns of Sonora.

We thought that was it for our tour, but as we headed back to the gift shop, there was one final surprise in store for us:  peacocks! 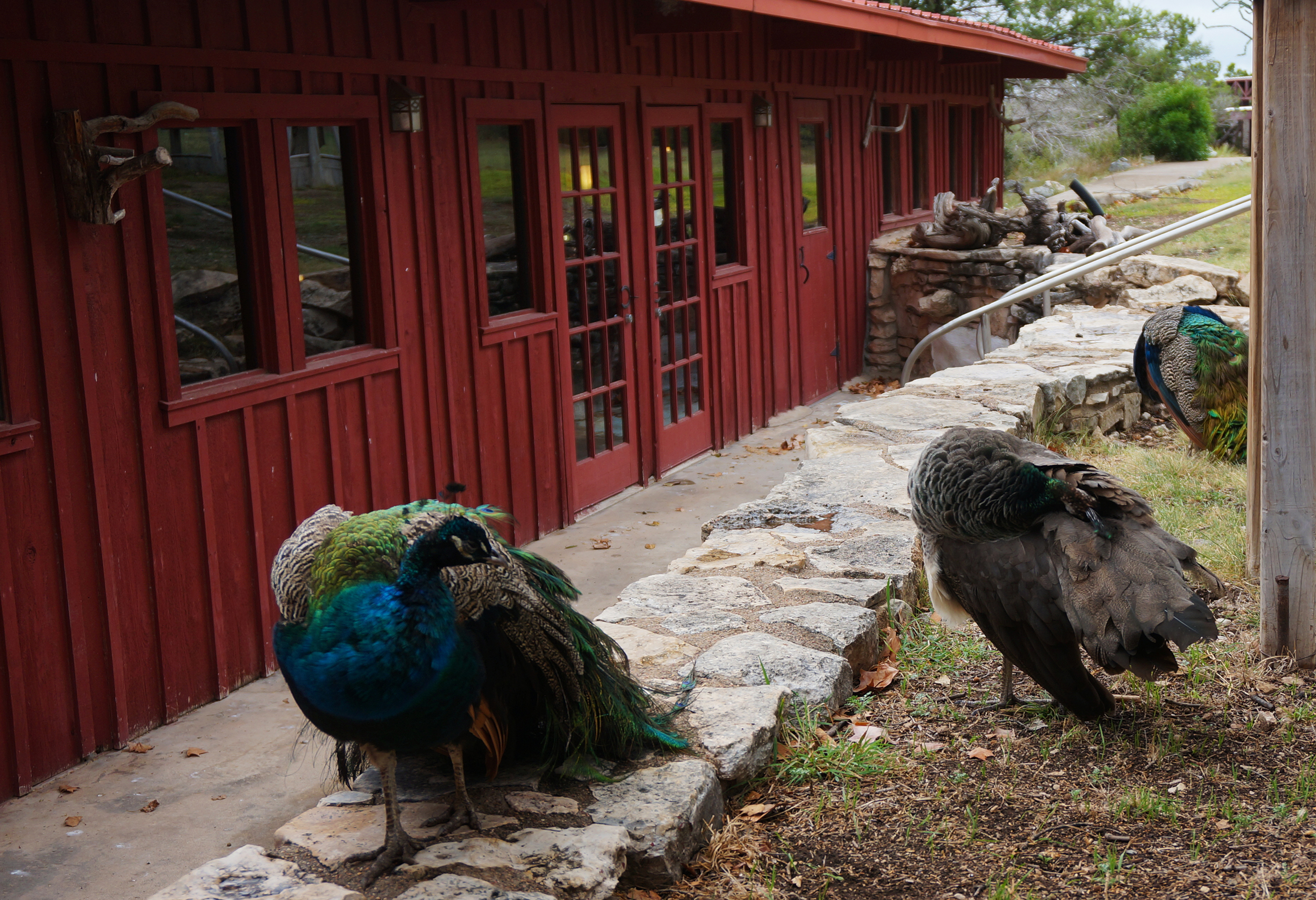 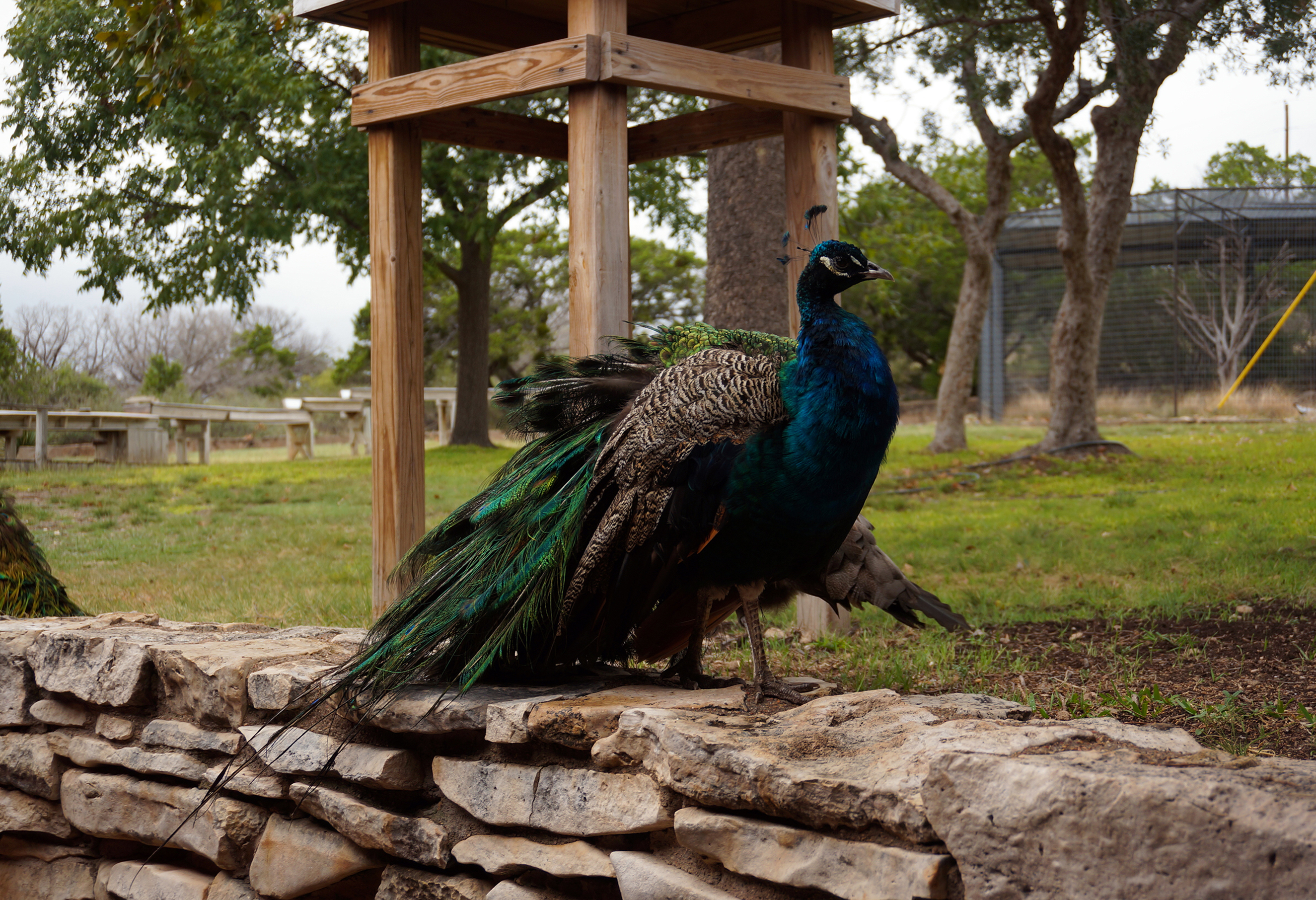 It was an unforgettable experience.  If you’re ever in the area, we strongly suggest you visit!

What’s now:  We are recovering from our hike up to the awesome Potato Chip Rock!

What’s next:  We are leaving San Diego shortly to try to catch the most incongruous of events:  wildflowers blooming in Death Valley.  Then, we’re doubling down in Vegas, baby!