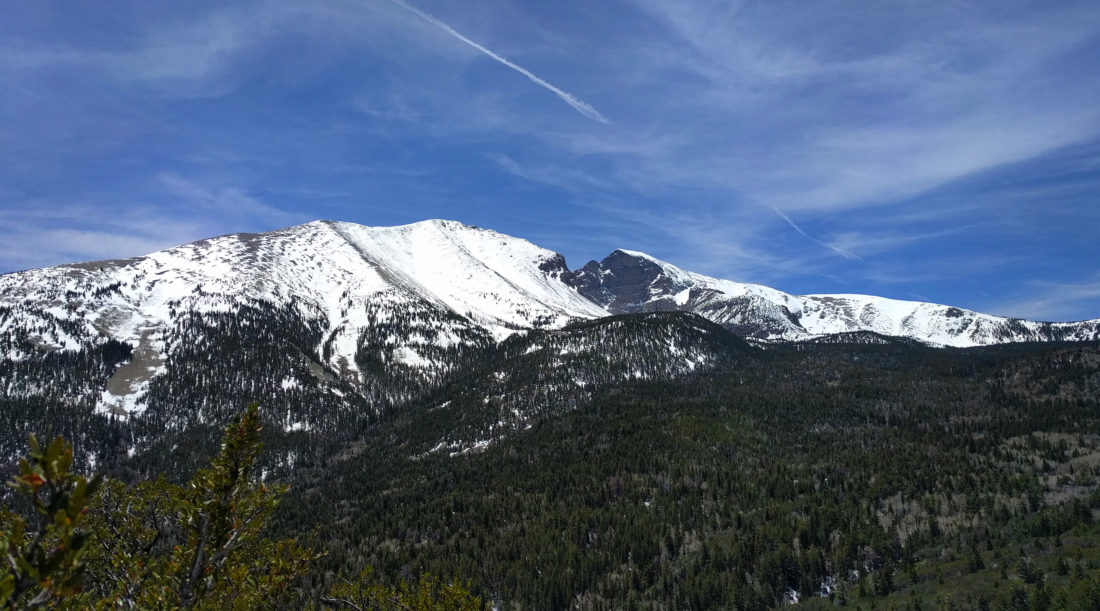 After a short-but-sweet visit to Salt Lake City, we headed south along I-15. It was smooth sailing through the valleys between Utah’s many mountains, but we soon turned off towards the west, to the tiny town of Delta, UT – population 3,500. Delta is at the absolute end of civilization, sitting on the edge of a vast desert wasteland.

On the other side of that wasteland? Our destination, Great Basin National Park.

“Great Basin” is the name of a national park, but it really describes a much larger area. The Great Basin is a desert, and it encompasses almost all of Nevada and some of surrounding Utah, Idaho, and Oregon. Situated between the Sierra Nevada and Wasatch mountain ranges, the Great Basin is unique because it drains internally – none of the (little) water flows out to any ocean.

Great Basin National Park is in Nevada, 100 miles from Delta, but with a speed limit of 80 mph, it wasn’t such a long drive. It certainly was memorable, though. The terrain was utterly fascinating, a unique and alien landscape which defines “barren.” There are no towns in that 100 miles, frankly no people at all, and the desert was often utterly flat and empty. Then, out of nowhere, we would encounter a shimmering salt lake or a jagged mountain range – which we would zoom by, and then back to nothing.

It was a good place to pretend to be in a Mad Max movie. Also: thank goodness for podcasts.

Aside from cinematic fantasies, the reason we made the trek through the wasteland was to see the world’s oldest trees – Great Basin’s bristlecone pine trees. Bristlecone pines aren’t particularly lovely – they’re small, twisted, and gnarly – but they are particularly good at surviving. Their age was actually unknown until 1964, when a grad student cut one down and counted the rings.

And discovered he had killed a 4,862 year old tree, one of the Earth’s oldest.  Whoops! 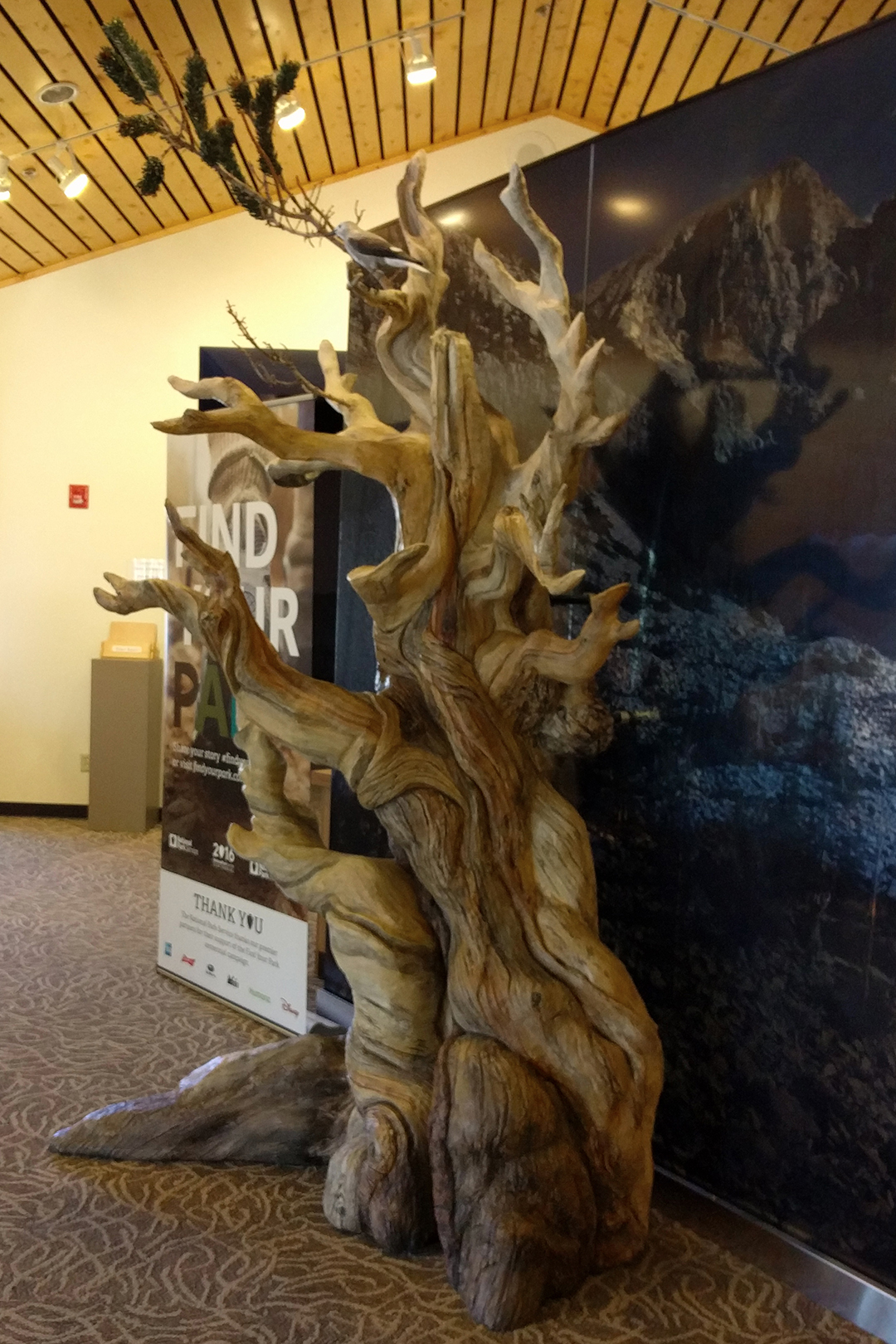 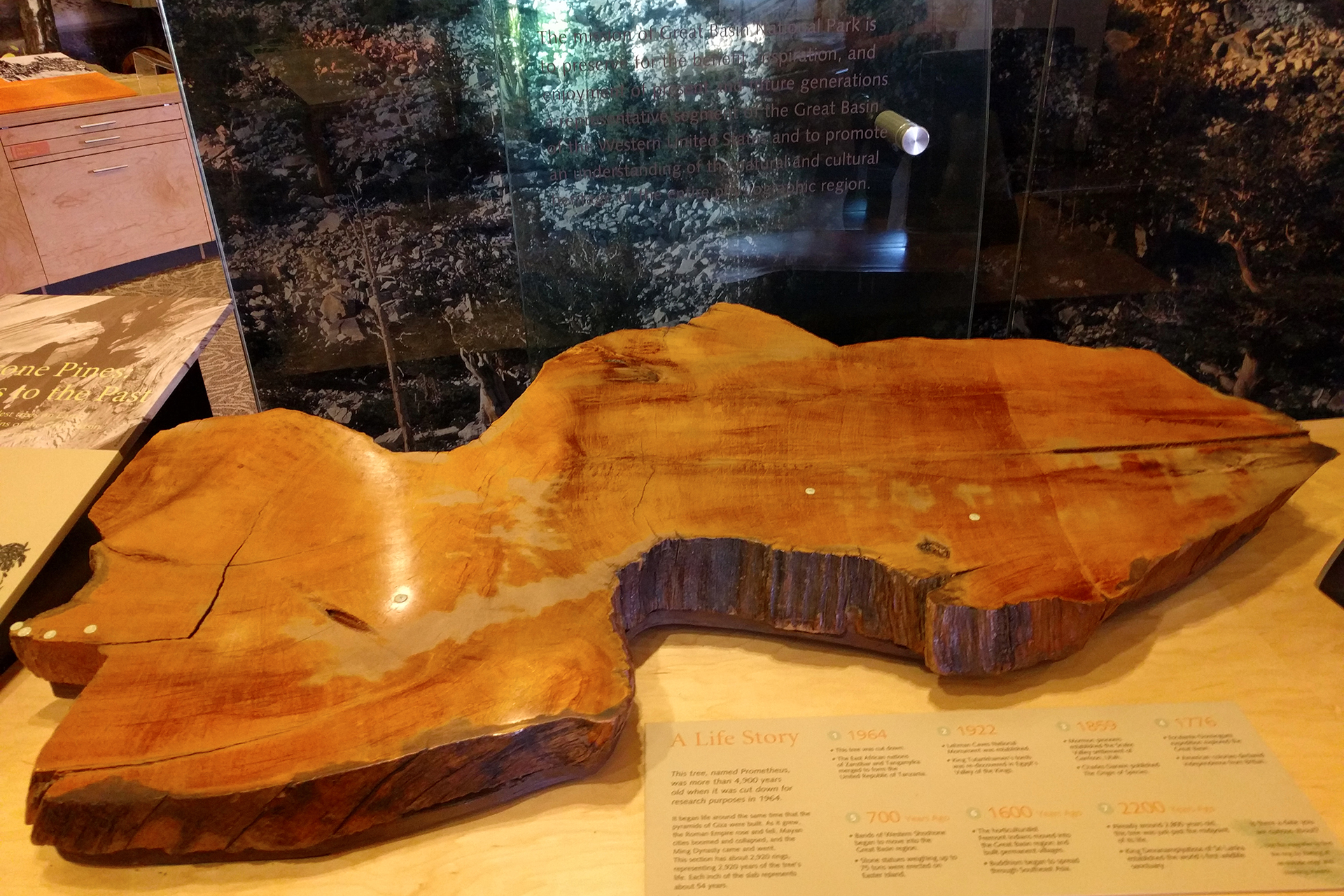 Today, bristlecone pines are better protected, but we never actually got to see them. Even though it was mid-May, the mountaintop where they live was still closed due to snow. (In fairness, that mountain is 9,000 feet high.) We had to settle for some amazing views from a nearby overlook.

With no bristlecone pines, we decided to visit the other major attraction at Great Basin, the Lehman Caves. We’ve been lucky enough to see some beautiful caves on this trip – most notably the Caverns of Sonora – and the Lehman Caves could have been one of the best. 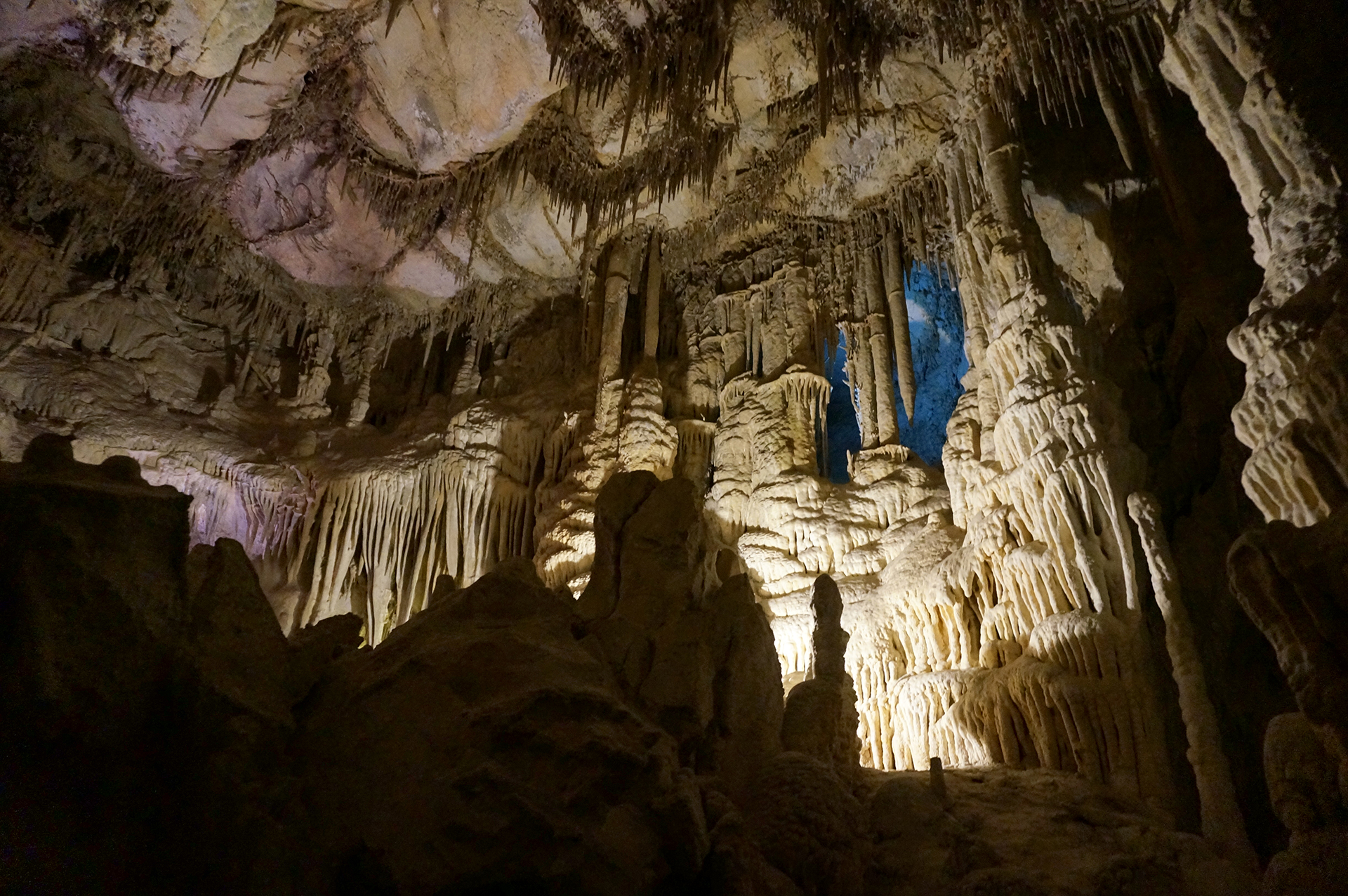 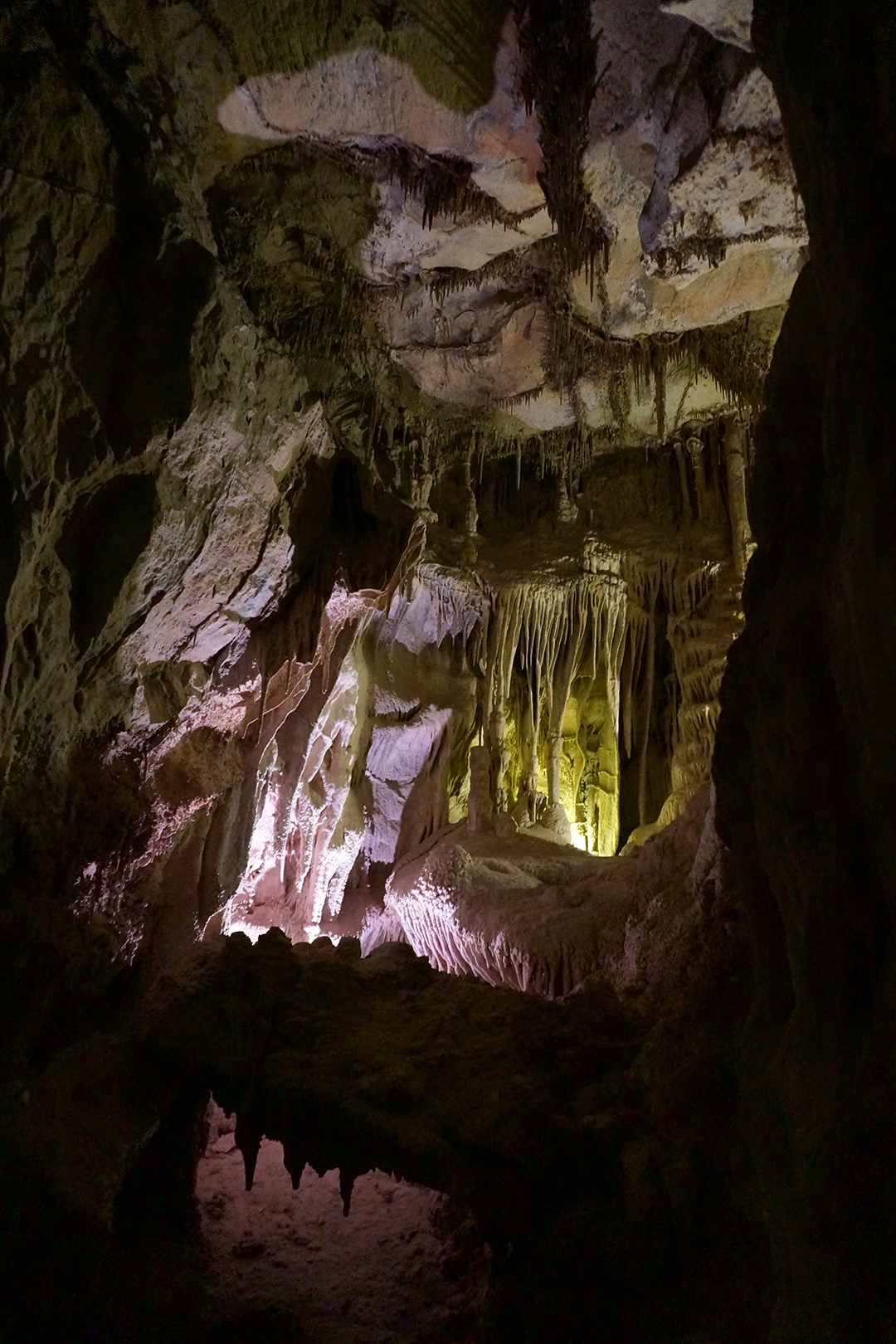 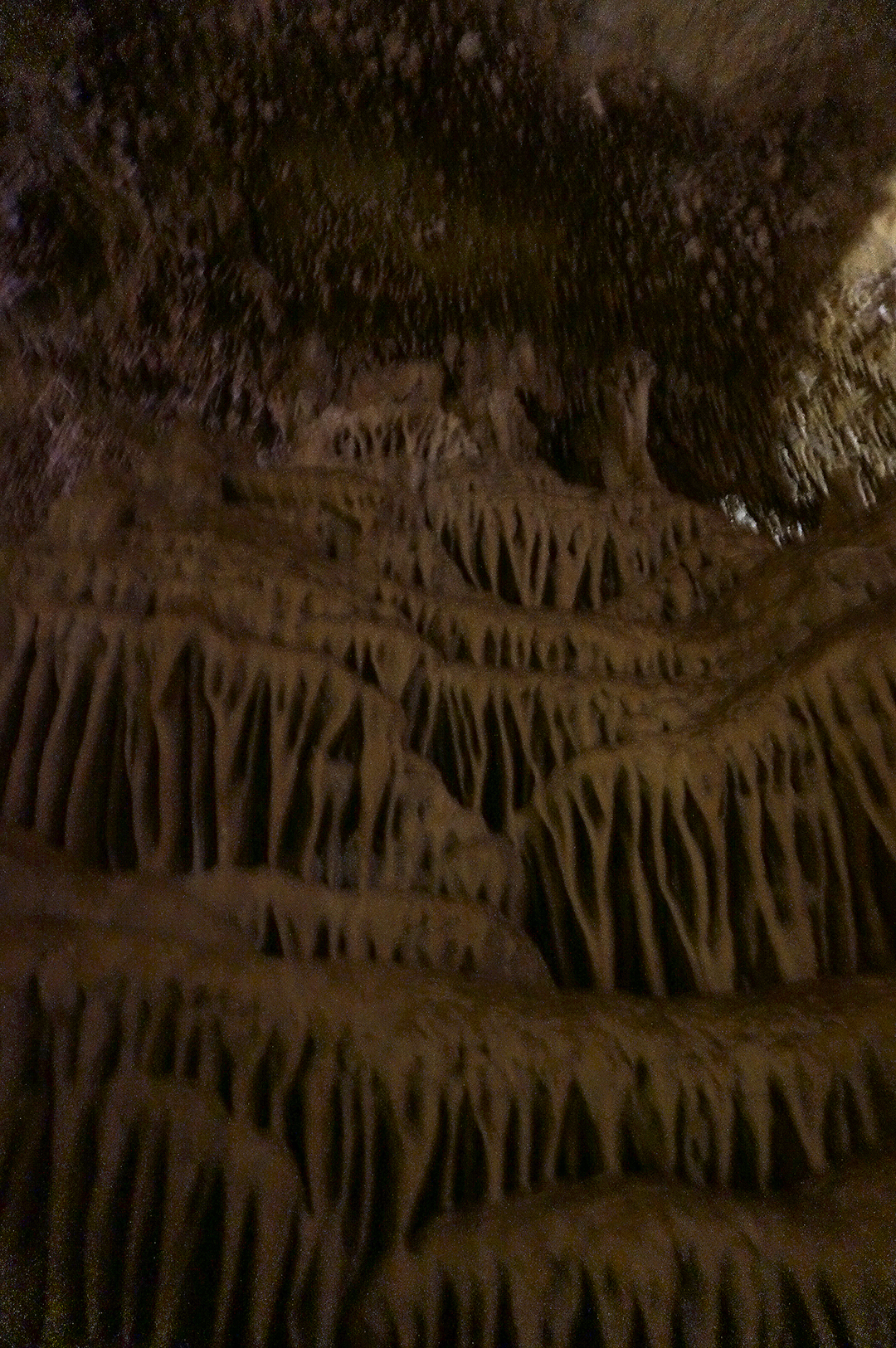 Sadly, however, they have been horrifically defaced. The original owners of the cave used to sell stalactite pieces to visitors, so many of the features are clipped off halfway down. In another room, visitors were encouraged to leave their name on the ceiling via candle burn marks. The ranger leading our tour suggested that the defacement of the caves created a new cultural significance, but we couldn’t help but feel sad for what was done there. 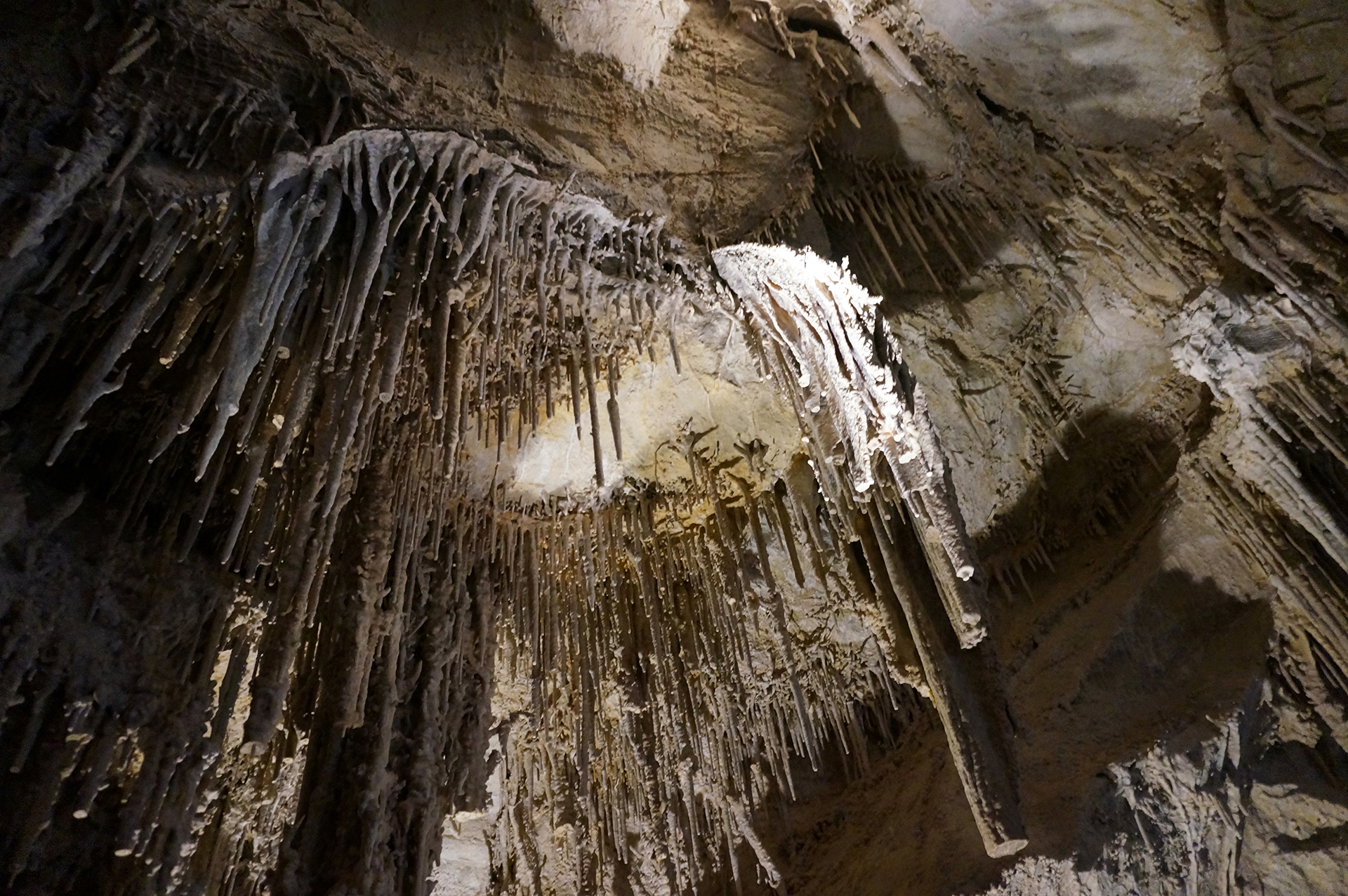 Speaking of the ranger, here’s a story that we just have to tell. The ranger leading our tour, Ranger Steve, was a seasonal ranger, meaning he had only recently arrived to work during the summer season. Steve was friendly and started out strong, but over the course of our ninety minute tour, his discussions gradually became more and more rambling.  By the end, he was almost incomprehensible.

That was strange, but things soon got stranger.  Our group ended up heading out of the caves around the same time as another group. The ranger of that group (lets call him Alan, because we don’t remember) asked Ranger Steve if they should merge the groups. Steve seemed genuinely terrified to answer and deferred to Alan, who then took charge of both groups. As we walked out of the cave entrance, Alan thanked everyone for coming and suggested we all come back for another tour sometime.

Which sounds innocuous, except that what Alan actually said was that we “should come back sometime and get a different experience with a different guide,” while staring directly at our (Ranger Steve’s) group.  The implication was clear: Steve was the worst, and we should try again sometime with someone else.

Ranger Steve just stared at the ground and said nothing. 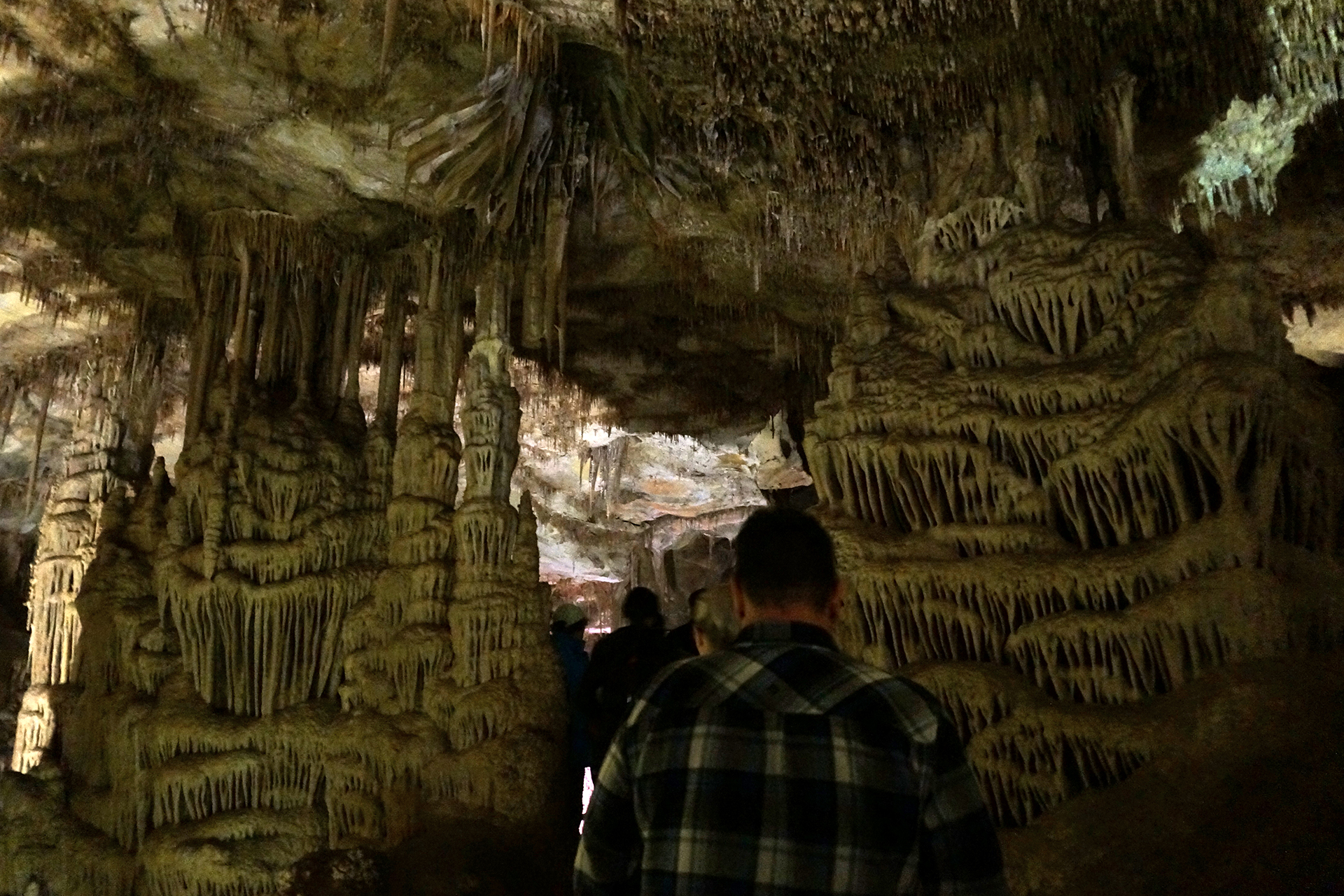 Friends, this raised so many questions. Was Ranger Alan doing some sort of subterranean bullying of Ranger Steve? Or maybe Ranger Steve really was a terrible ranger, and even he knew it? Was Ranger Steve even a ranger?

So strange. The last puzzle piece of weirdness, though, is that all of this was only Jake’s experience. Heather didn’t observe any of these interactions between the rangers. Her experience was just that Ranger Steve and Ranger Alan were both “very nice.”

So… did any of this even happen?  Or was it all some kind of cave madness?

Was Ranger Steve even real?

We may never know.

Where are you now?  Still in Pittsburgh, moochdocking with friends.  Thanks, Jamie and Chris!

Next location?  Dunno.  We are beginning to regret including this field in each blog post.