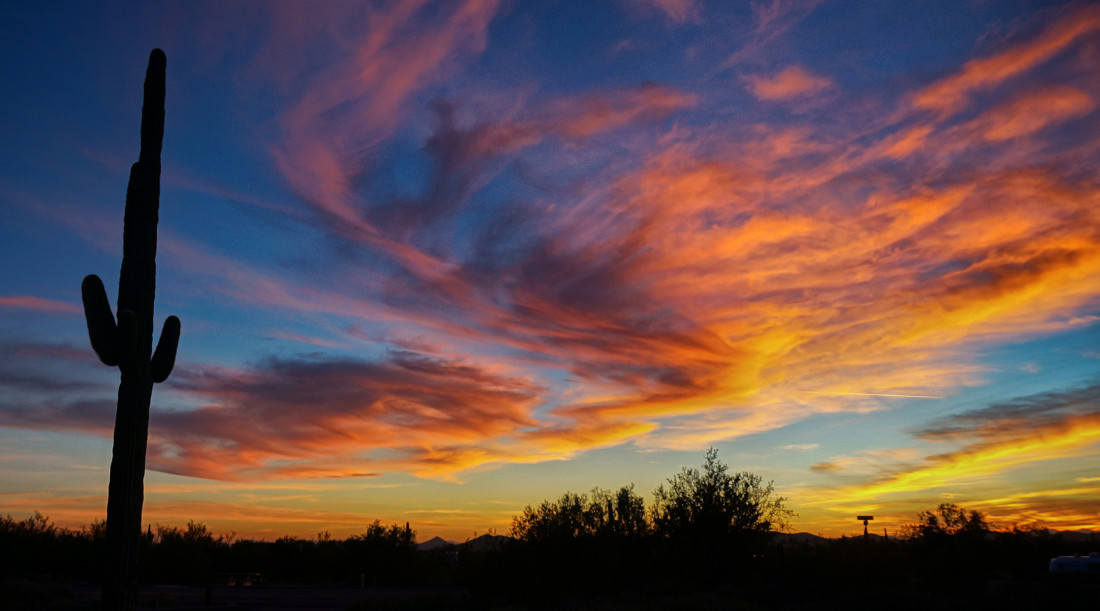 Week 24+ : Driving Down and Climbing Up in Phoenix

After a short stay in Holbrook, Arizona to visit the Petrified Forest, we had hoped to head to the Grand Canyon.  Unfortunately, it was December, and the weather at the Grand Canyon was literally freezing (and also snowing).  Rather than freeze ourselves in our little metal house, we decided to take the lead of snowbirds everywhere and fly south for the winter.  We changed our destination to Phoenix, via Flagstaff, Arizona.

We knew nothing about Flagstaff before we traveled through it, but now we know one thing:  it’s really high.  Flagstaff sits at an ear-popping 6,900 feet, and as a result, the landscape is more “alpine forest” than the Arizona desert landscape you probably picture.  As it turns out, Flagstaff sits along a mountainous ridge that extends over most of Arizona; Phoenix, much lower in the Valley of the Sun, is more of an outlier than Flagstaff!

Since we performed our typical “none” level of research, we knew “none” of this at the time.  However, we could tell the elevation was high as we were driving through Flagstaff, due to our homemade altimeter: a bag of Tostitos we bought in Florida and never opened.  We leave it in the RV now because it is pressurized at sea level, and it’s fun to watch it expand when we travel to places at a higher elevations.  As we passed through Flagstaff, we genuinely thought it might explode.  [Ed. note:  we took pictures, but sadly lost them.]

From Flagstaff, we descended 6,000 feet in about 100 miles to get to Phoenix, which sounds scary but was quite well managed.  It took longer than expected, but we did make it to our beautiful campsite at Phoenix, spirits high and Tostitos bag deflated.  This would be as far as we would go for the next month. 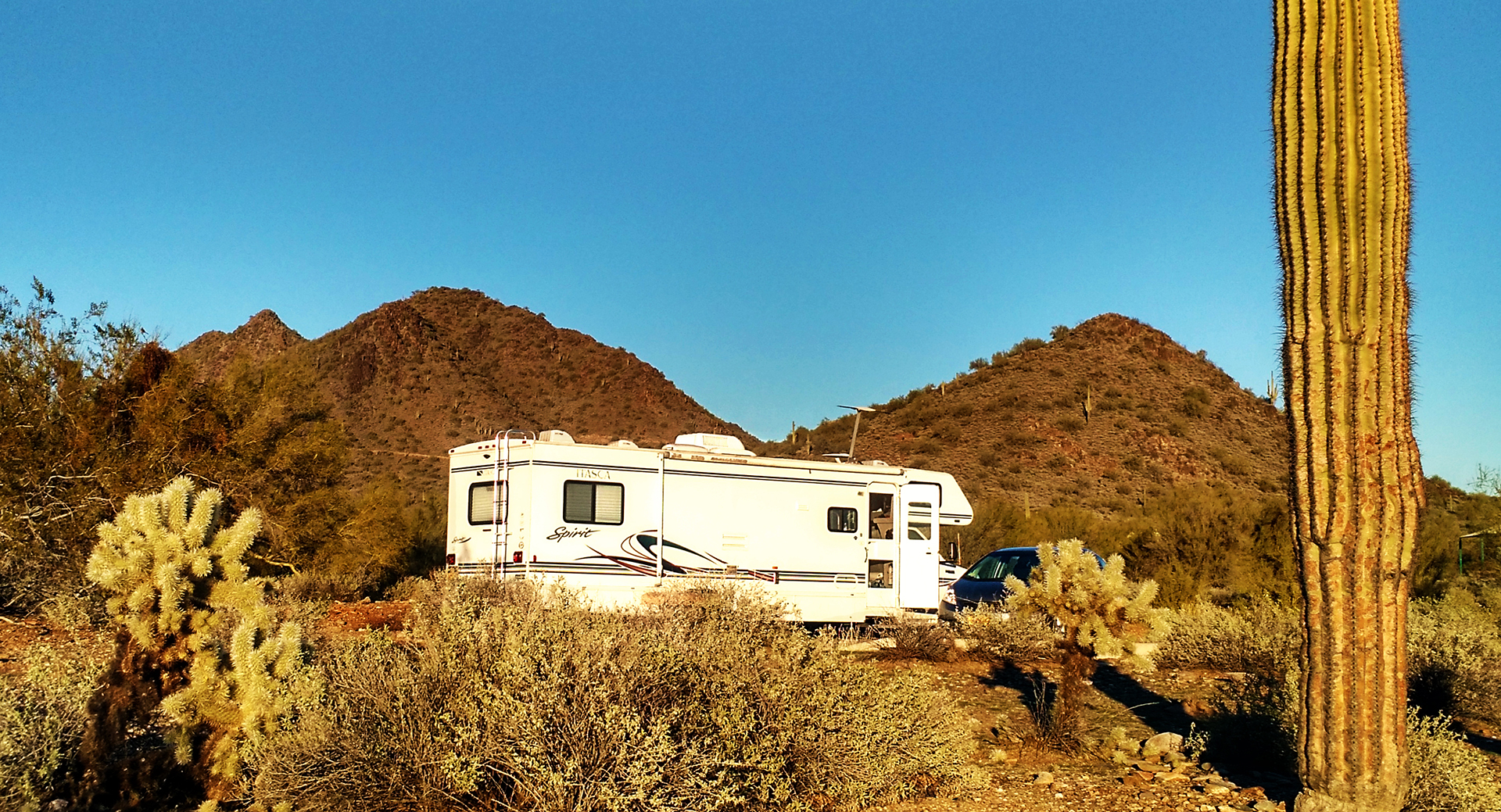 Our first impression of Phoenix was that it was much nicer than we imagined.  It was winter, so unlike this classic Arrested Development bit, it wasn’t hot.  In fact, the temperature was quite comfortable, and since we were staying at a county park outside of the city proper, the landscape was surprisingly green.  All the buildings were nice and new (thanks, housing bubble!), but retail signage was subdued, with most of the stores located in brown, adobe-style buildings.  (Aesthetically pleasing, although a bit confusing in practice.)

Almost everyone we met was friendly and relaxed, in part we were pretty far outside the city center, but also because everybody around us was a retiree.  Now, we certainly expected there would be a fair number of older folks around, but the sheer uniformity of it was staggering.  The deli counter people at the (gloriously huge) grocery store we went to were retirement age, as were the checkout clerks at Target.  (Gotta make those balloon mortgage payments, we guessed.)  Everywhere we went, the grey-haired workers were friendly, hard-working, and slow-moving.

It wasn’t bad, really, but it was certainly unique.

We were in Phoenix in early December, and as the holidays approached, most of our time was spent running errands and making preparations for our upcoming roadtrip-within-a-roadtrip. We then returned to Phoenix in January, but after traveling across the country twice (see next blog post!), we didn’t have the stomach for much travel sightseeing.

In other words: we didn’t take many pictures.

However, we did spend a fair bit of time hiking within the park we were staying at.  There was a nice trail which went up and around a mountain, offering beautiful views of the valley Phoenix sits in, along with many very tall cacti.

Obviously, we enjoyed this all in a classy and respectful fashion. 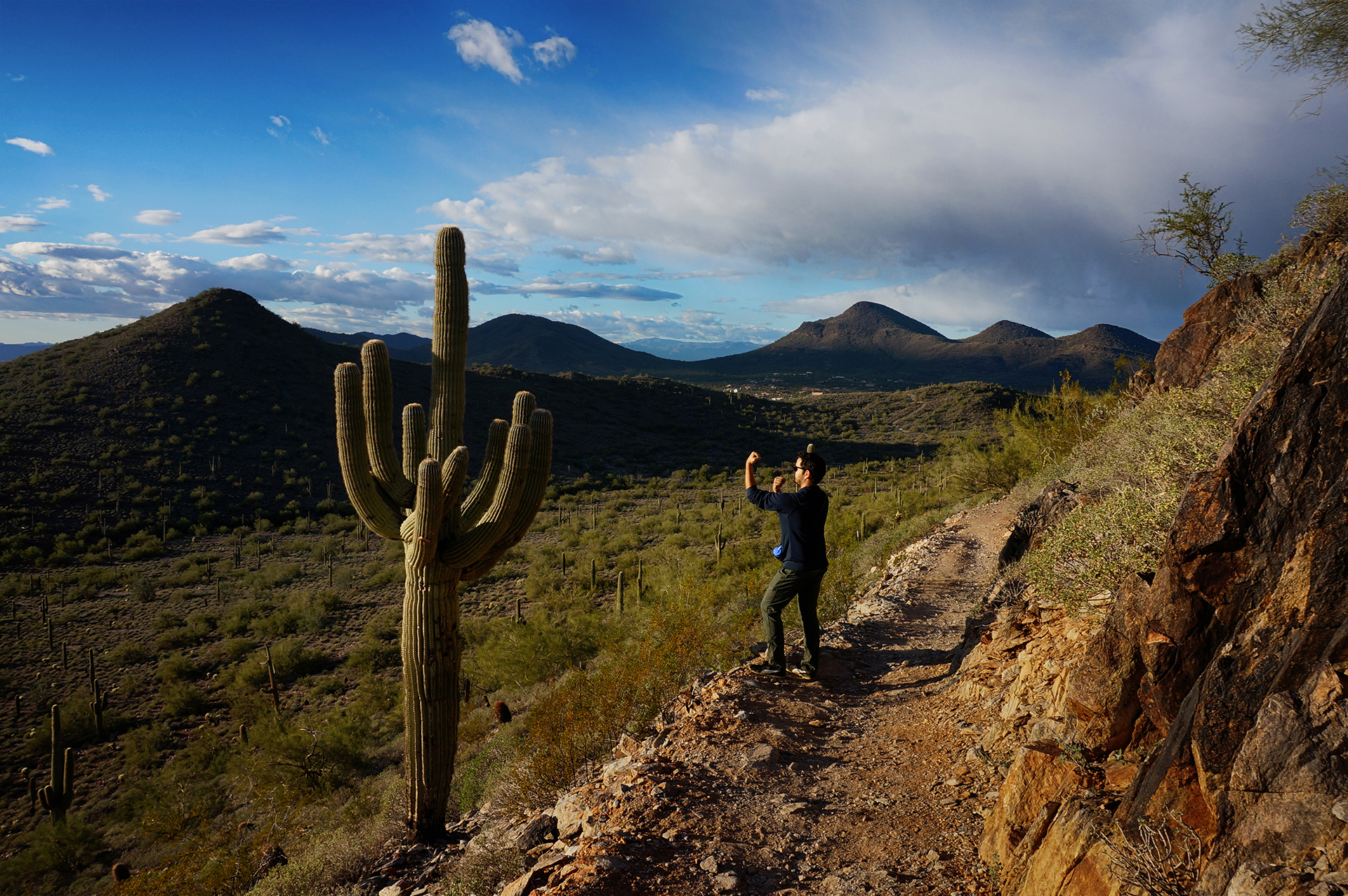 My money is on the Saguaro.

The Straw That Broke

We did do one adventure while in Phoenix, climbing Camelback Mountain, a tall mountain which sits very close to downtown Phoenix.  Before we went, we read online that it was tough, but as seasoned-ish hikers, we assumed it wouldn’t be a problem.  We didn’t even bat an eye at the “double black diamond” designation at the base of the trail. 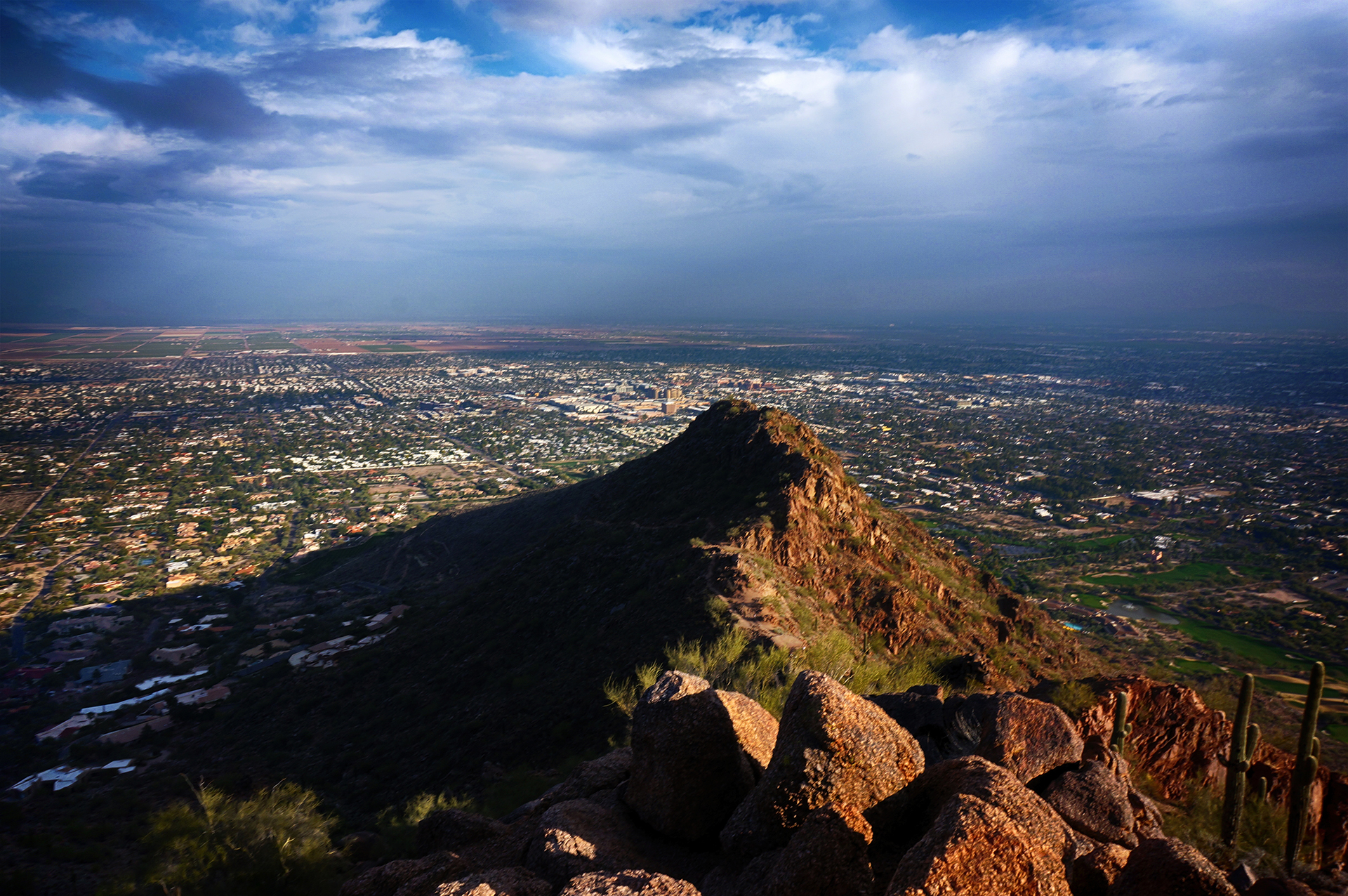 Friends, let us tell you, Camelback Mountain is no joke.  It climbs to a height of 2,700 feet very steeply, and the final section involves scrambling around and over huge boulders, propped up precariously and proximately to a cliff.  They try to make the trail clear by marking it with blue paint, but it’s pretty easy to lose it, especially near the top. 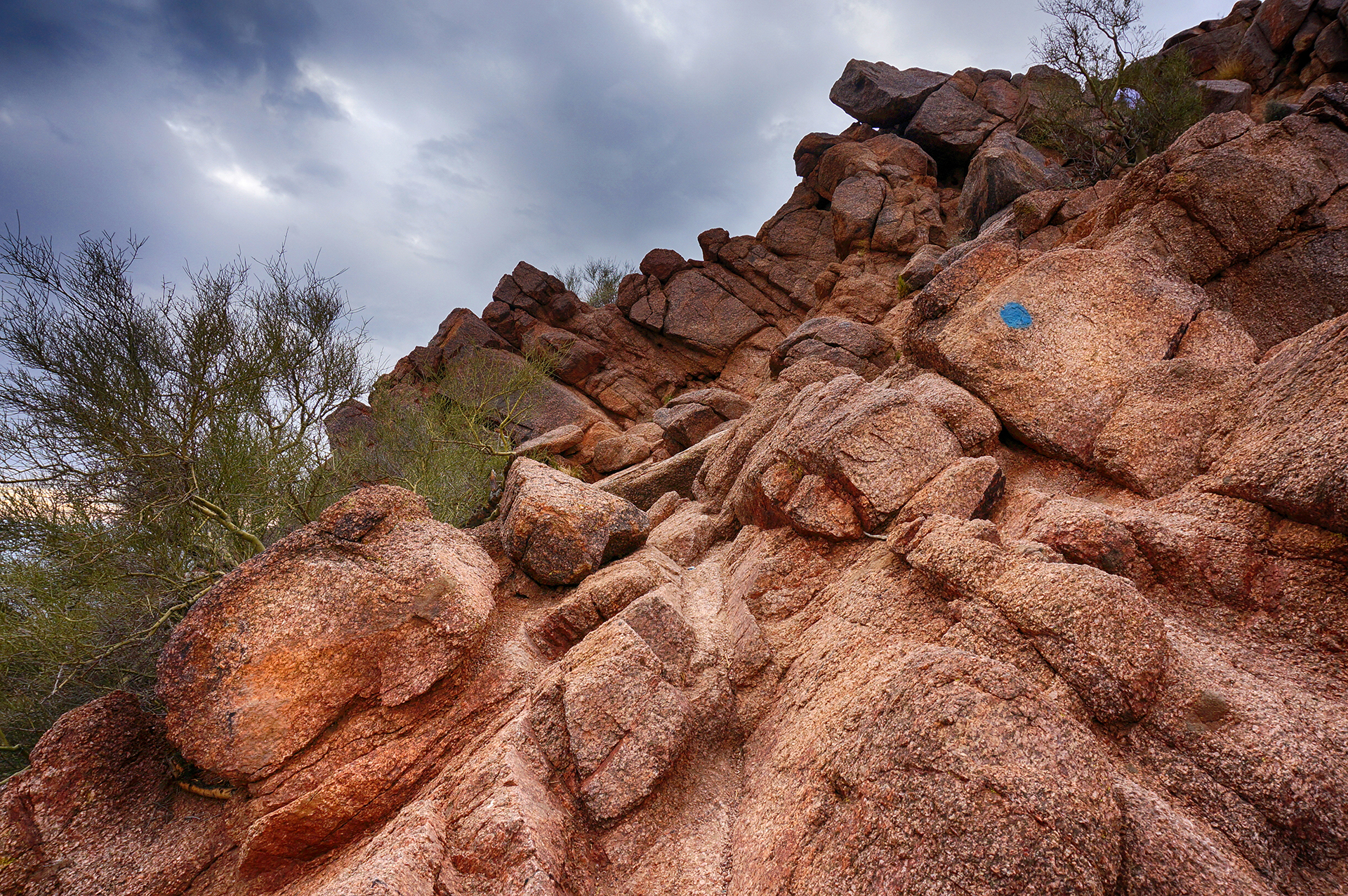 The hike is as exhausting as it is legitimately dangerous – multiple people have died, and dozens have to be rescued every year.  In fact, a man saved a woman from falling off the edge by grabbing her ankle just a month ago!

In other words, Camelback is intense.  That said, the view from the top is truly spectacular.  Definitely recommend, but be ready for a workout – and tread cautiously.

Where are you now?  The tiny town of Trinidad, California, in the land of old-growth redwoods.

Next location?  We’re here for a week, then heading further up the California coast.  Get ready for a lot of redwood pictures.