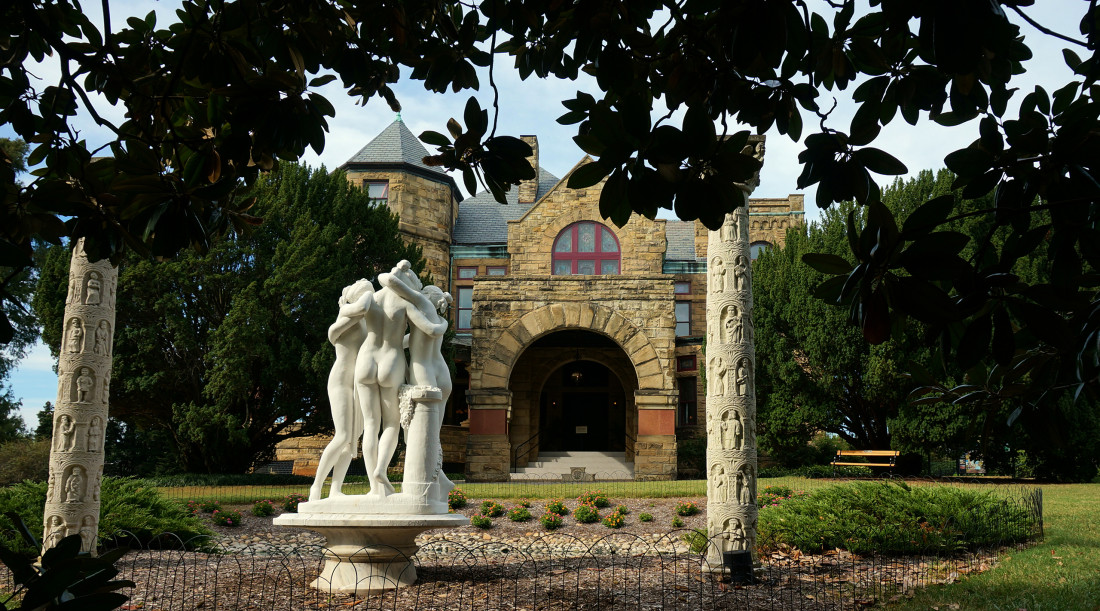 Heading south from Washington, D.C., we headed towards Richmond, Virginia, the third stop on our “Race to San Antonio.”  We were only in town for two days, which was a shame, because (1) Richmond was pretty cool, and (2) our RV park was right next to a well-regarded brewery (!) and we never got a chance to check it out.

But that’s OK, since it turns out Richmond has a lot of breweries.  In fact, we met Heather’s friend Tex at a brewery on our first night in Richmond.  The beer was tasty, and the men’s room art was sublime.

Not a bad start to our 36 hours in #richmond.

We started our full day in Richmond with Monument Avenue. It’s a wide, tree-filled boulevard featuring statues of Civil War Confederate bigwigs, along with, for some reason, Arthur Ashe.  If you don’t know who that is (we didn’t), he was a Richmond native and the first black man to win the singles in Wimbledon and the US Open.  (He also left Richmond because it was horribly segregated.)  His statue was added in 1996, long after the others, and was quite a controversy at the time.

Today, in your humble correspondents’ opinion, the statue is still controversial, but only because it appears to depict Mr. Ashe beating children with a tennis racket and/or throwing a Bible at them.  He may also be defending himself from zombie children; it’s unclear.  Either way, we can’t support this statue:  a tennis racket is a terrible choice of weapon. 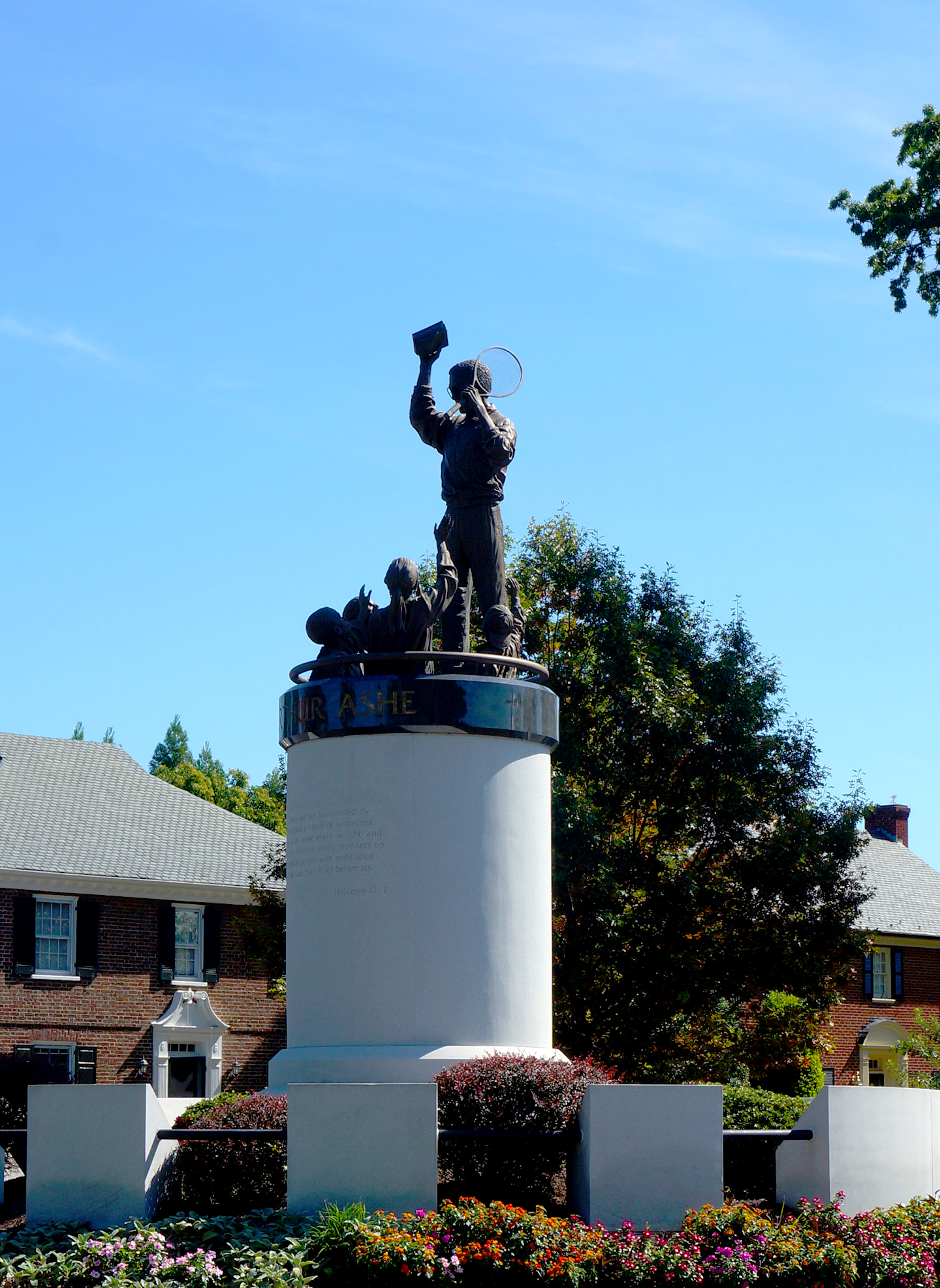 We followed Monument Avenue, and eventually ended up downtown with plans to explore the state capitol building, John Marshall’s house, and some other historical stuff.  Unfortunately, approximately 8 seconds into viewing the (very pretty) capitol, Heather’s flip-flop strap broke in an un-fixable and un-walkable manner.  She ended up walking the several blocks back to where we parked our car barefoot, and we came to appreciate that Richmond is very clean. 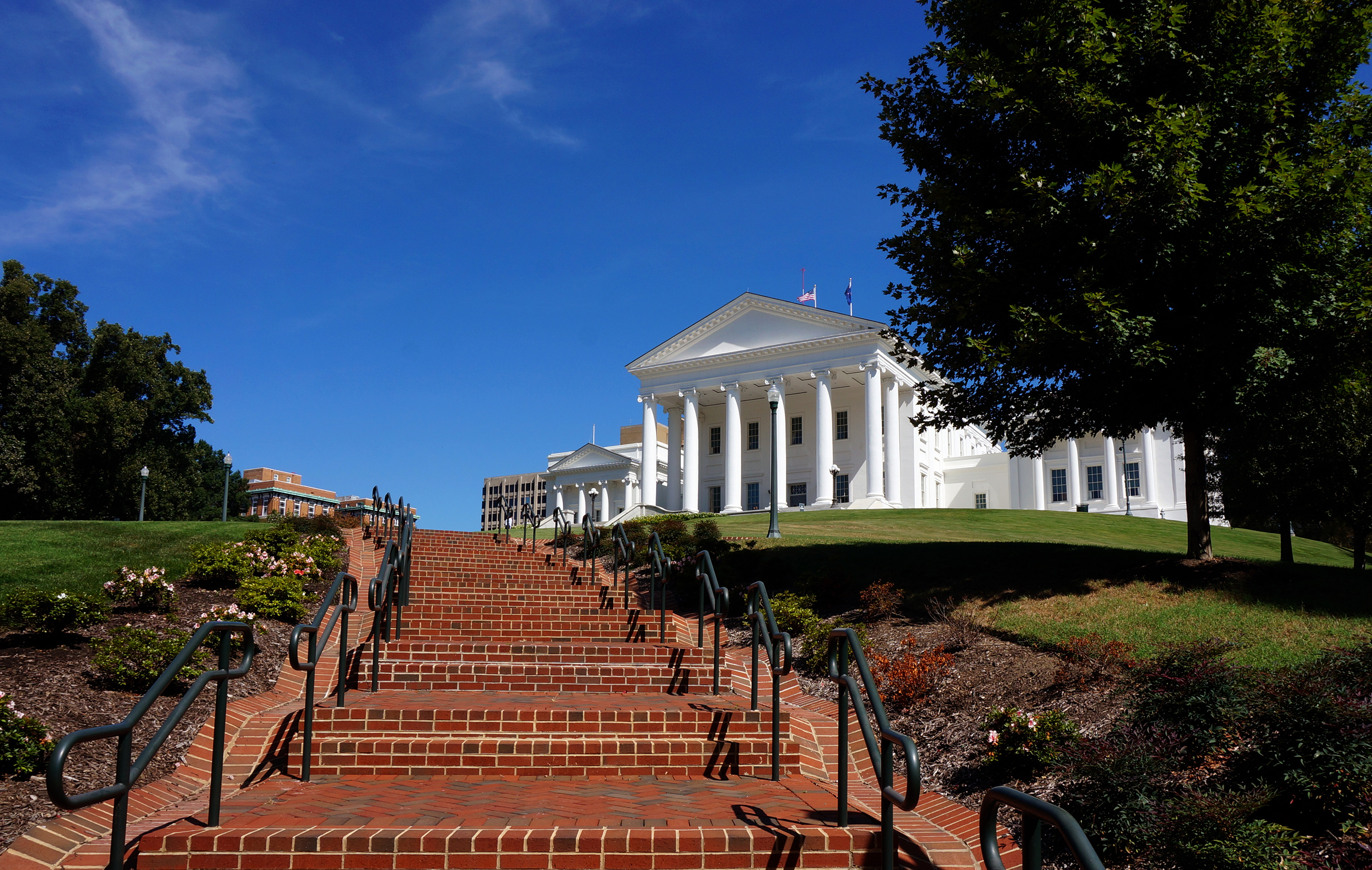 Nice place for a barefoot walk…

Heather was too embarrassed to go into a real shoe store, and she didn’t want to drive all the way back to the RV Park to get another pair of shoes, so we drove to a Target in the suburbs.  She ended up getting a pair of ankle boots to replace her flip-flops, because style, and nobody at Target said anything about the fact that Heather’s flip-flop was tied onto her foot with a hair band.

We celebrated the new arrangement with some monstrously large sandwiches from the Black Sheep.  The sandwiches are called “battleships,” and the menu section for the battleships is titled “The War of Northern Ingestion.” We got two half-size portions of the SS Sultana and the USS Roanoke, which proceeded to defeat us deliciously in gastric combat.

After slipping into and emerging from a light food coma, we headed to Maymont Mansion, a beautiful plantation-type house constructed in the early 1900s.  Maymont has been preserved as a public park, and the furnishings inside were in remarkably good shape.  Also in remarkably good shape was our tour guide through the mansion, Bill, who is 97 years old and still going strong.  Although he couldn’t really hear us, he still has a tour guide’s booming voice, and he climbs stairs like a man of no more than 67 years, tops.  Bill was alive when the mansion’s owner passed away in 1925!  Crazy. 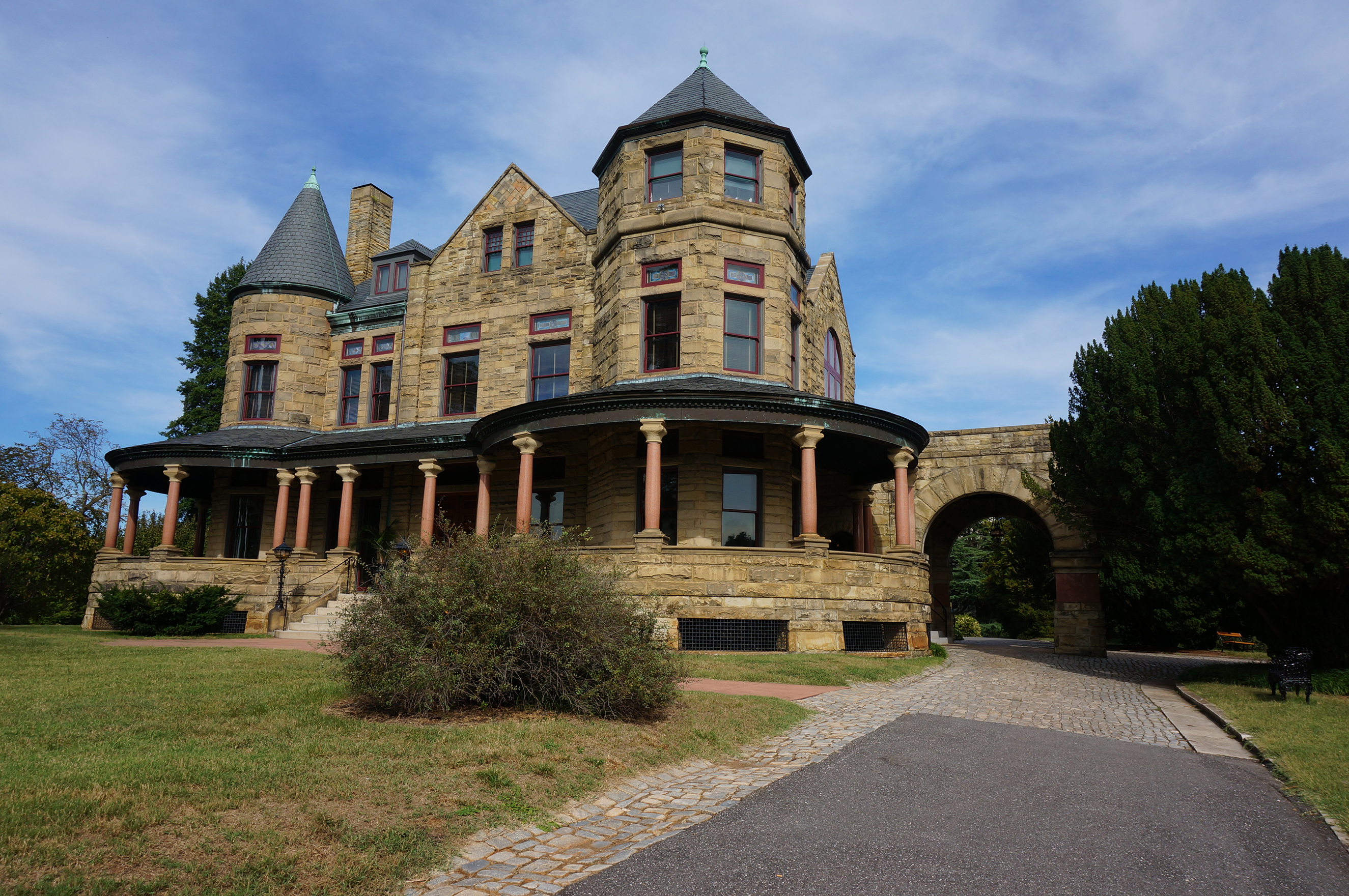 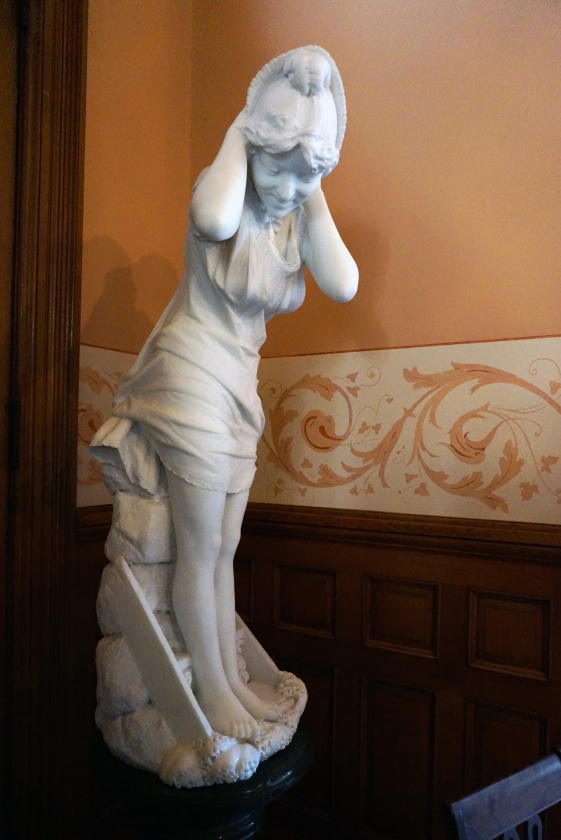 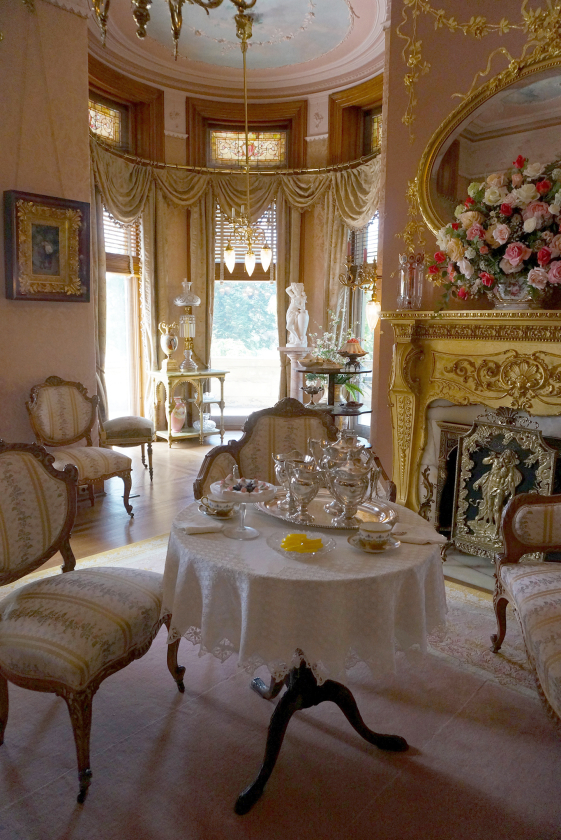 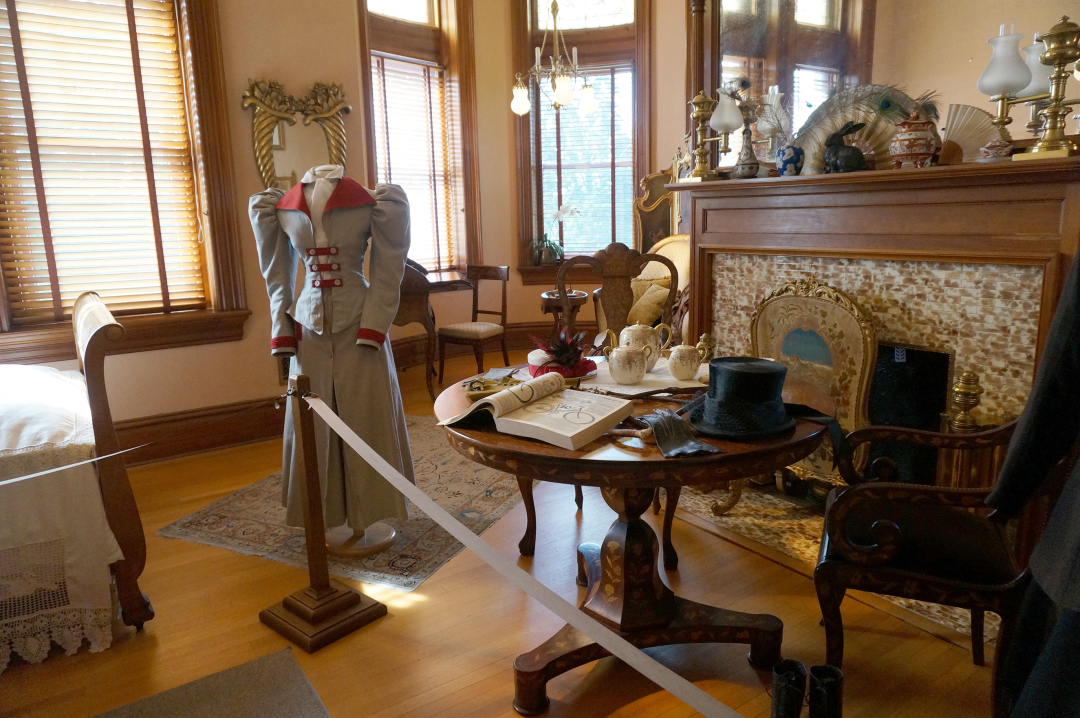 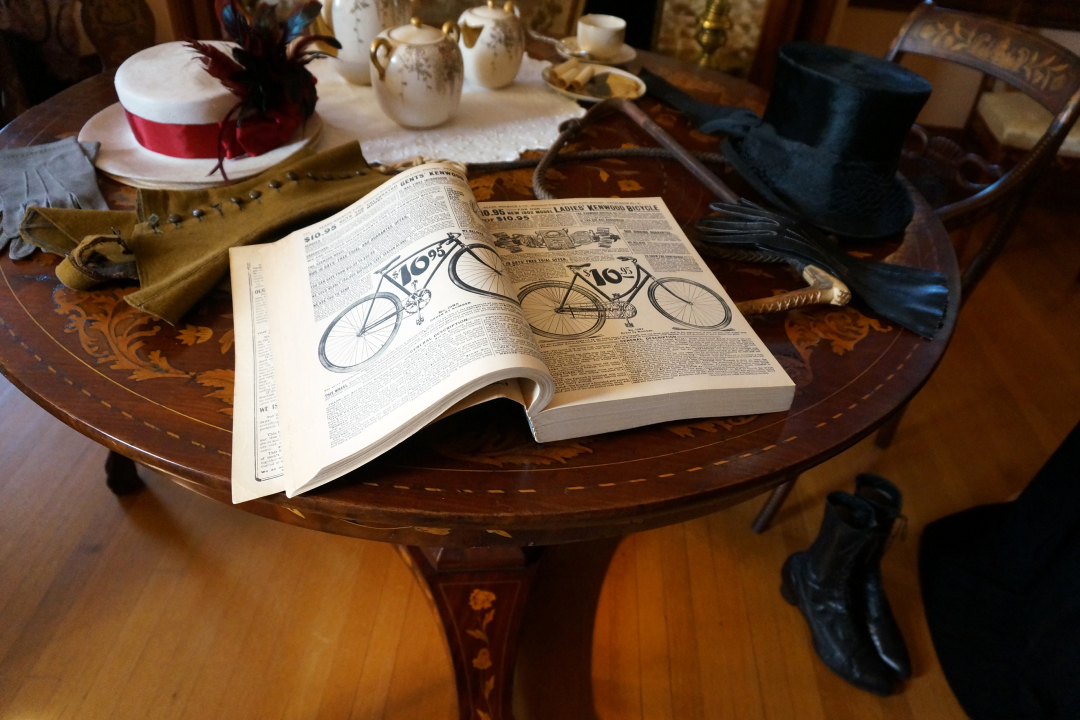 We had to point out one highlight from the below photo of the lady’s bedroom.  The swan bed is cool, but check out the vanity and chair to its left.  They are made from the tusks of Narwhals!  Narwhals are basically the unicorns of the sea, and this furniture is made from their horns. Woah. 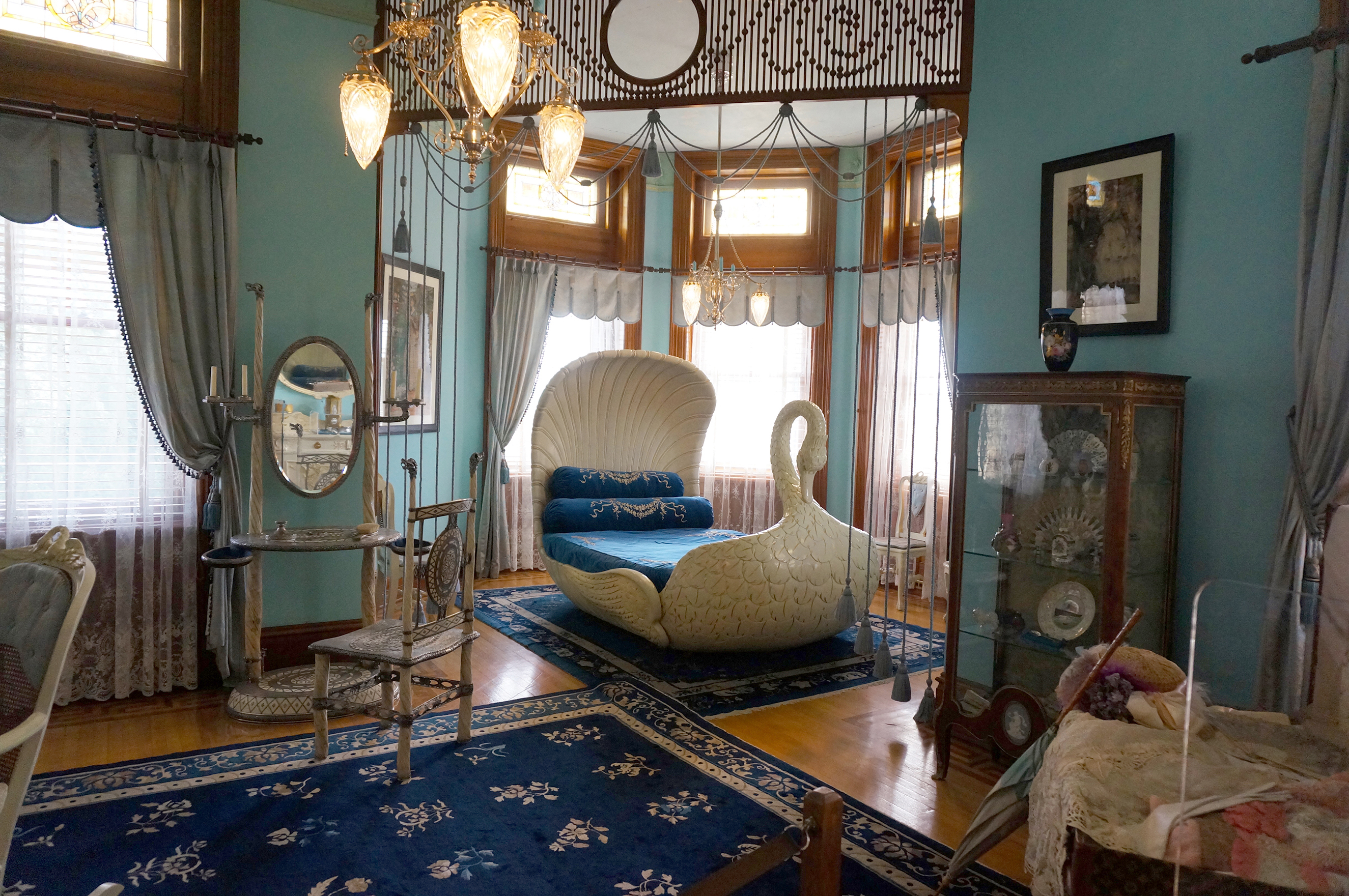 After leaving the mansion we strolled around the English and Japanese gardens, which were beautiful and huge. Heather’s choice of high-heeled ankle boots were not exactly perfect for the cobblestone and grass walkways, but she was a trooper, and only walked barefoot through the gardens for a little bit.

This blog post should probably be subtitled, “Heather walks around Richmond barefoot.” 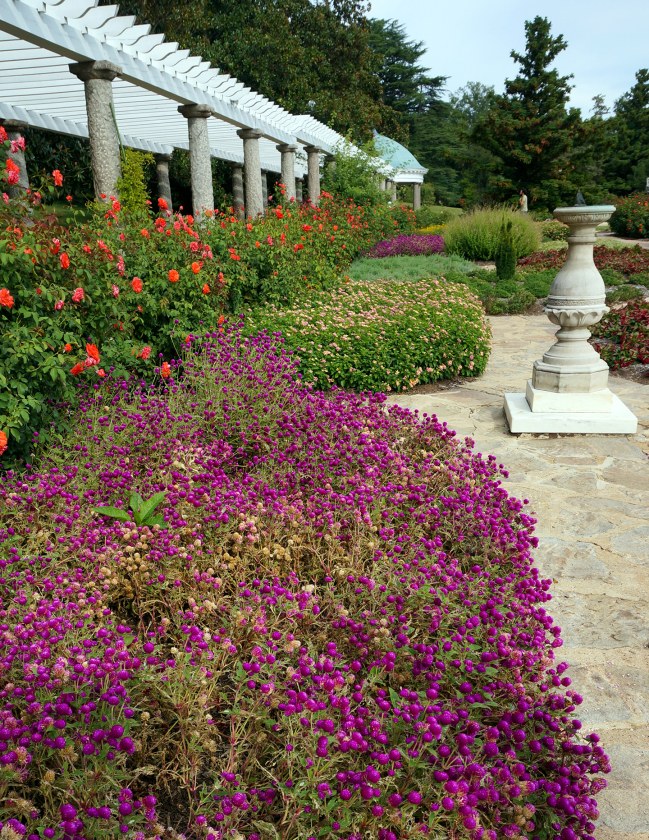 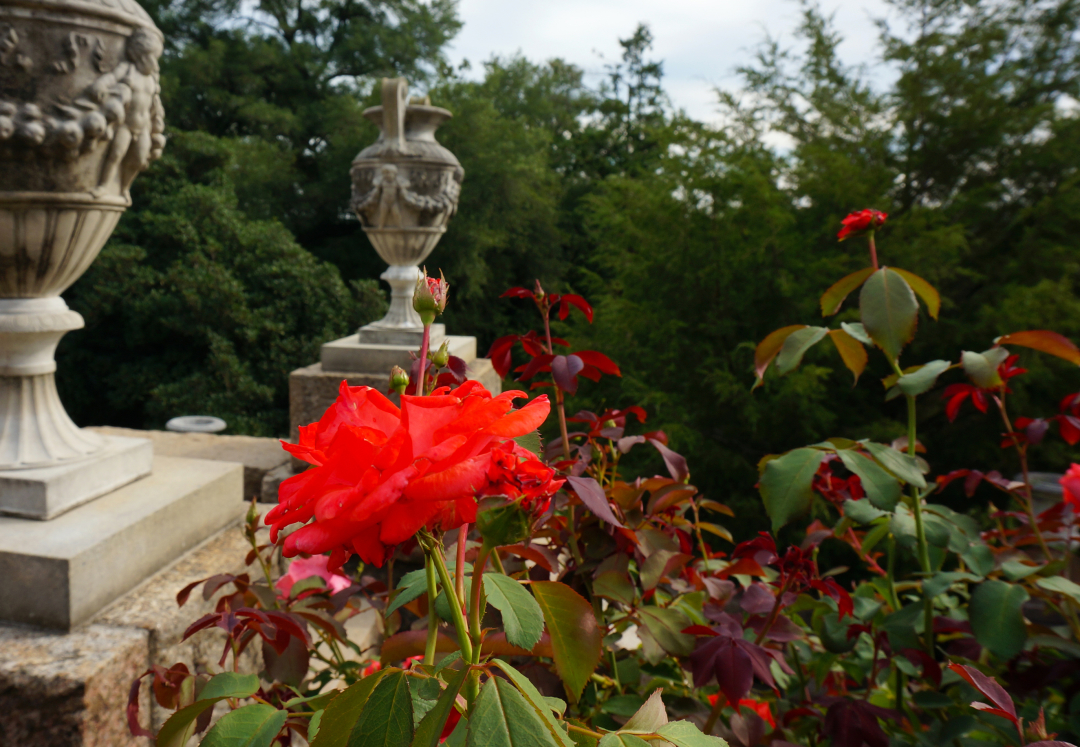 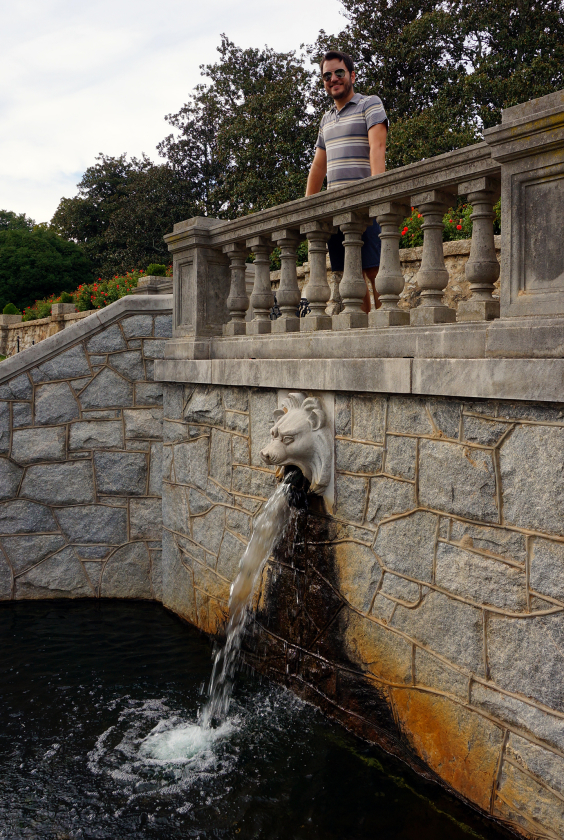 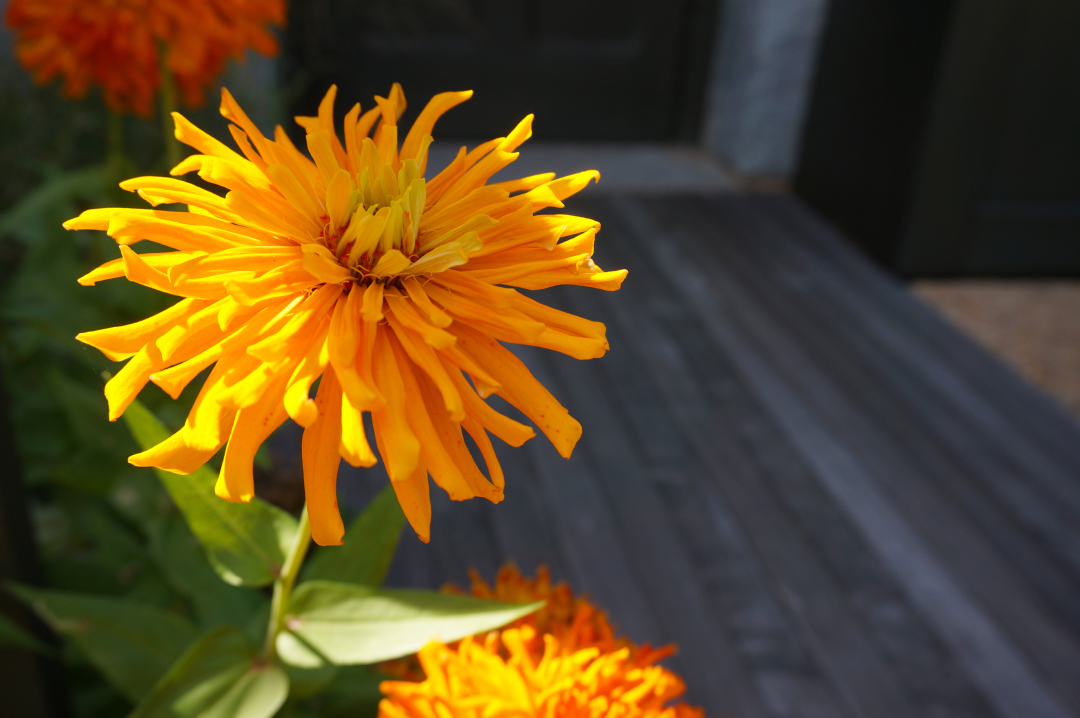 The English Garden was lovely, but the Japanese Garden was even prettier.  There were a lot of fun features, including stepping stones in the giant koi pond. 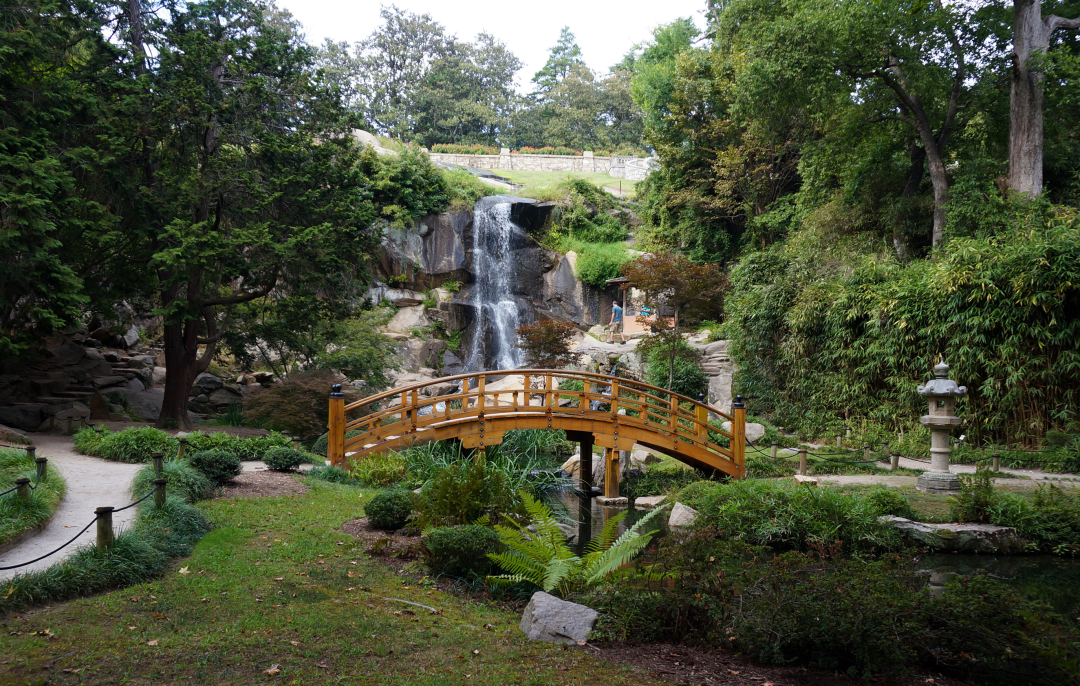 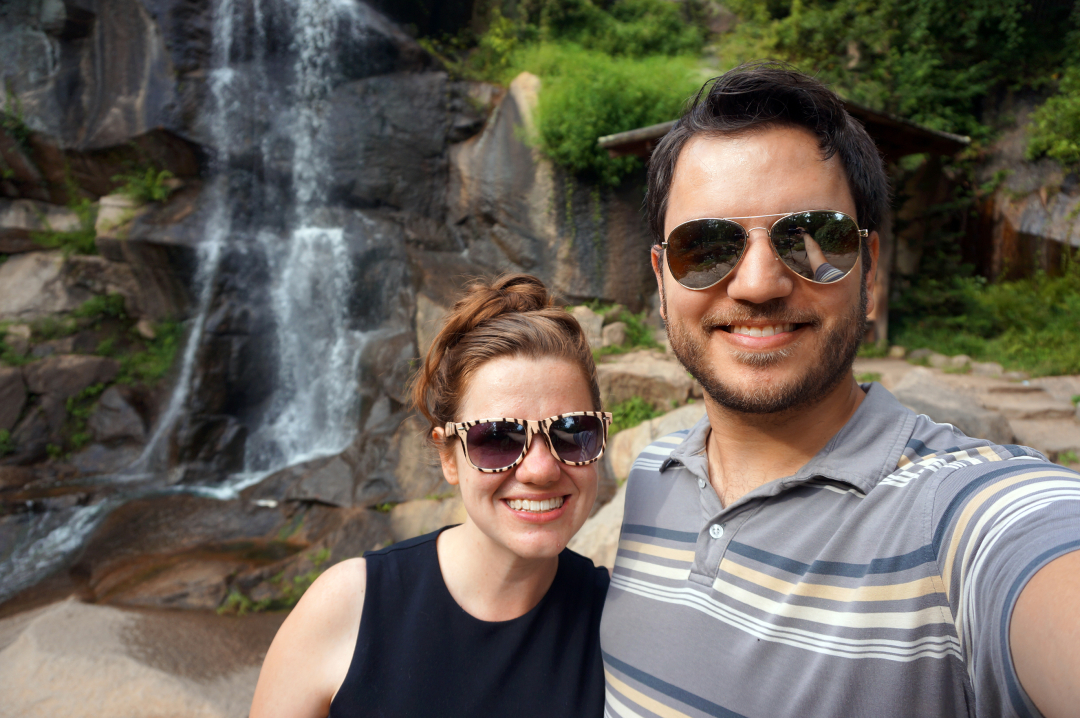 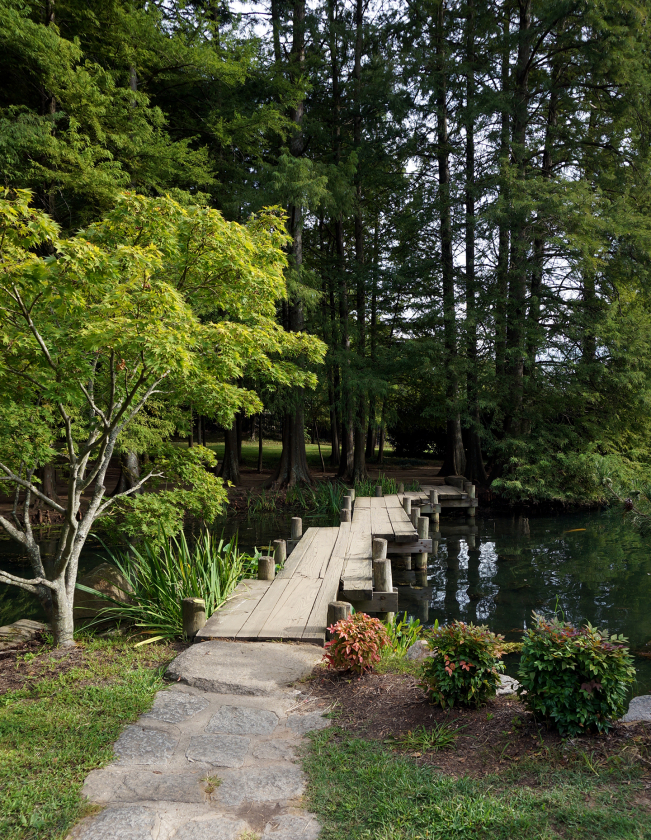 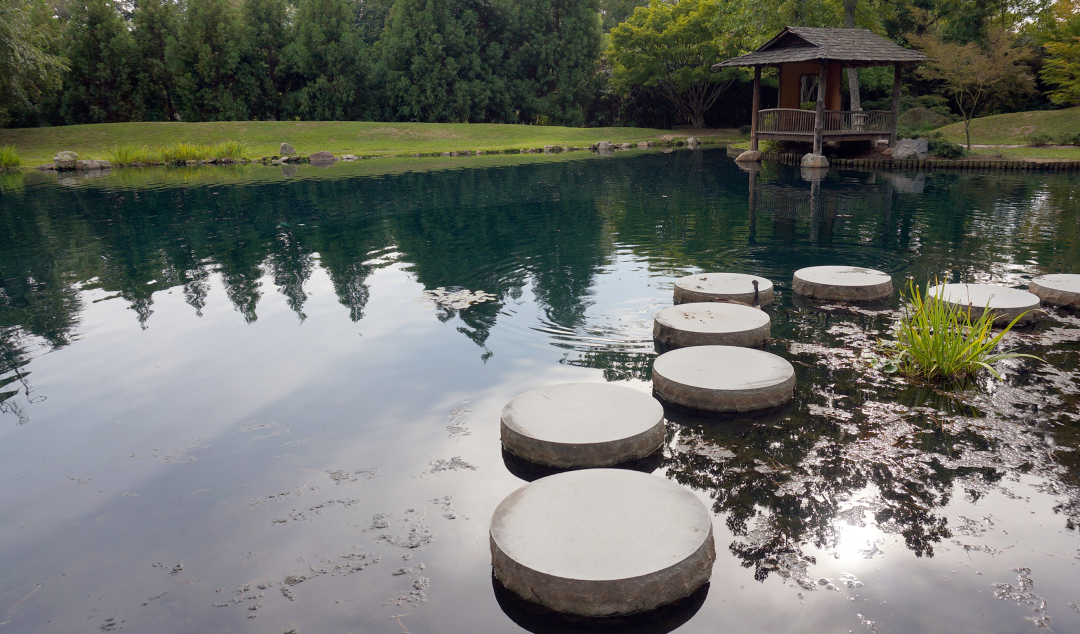 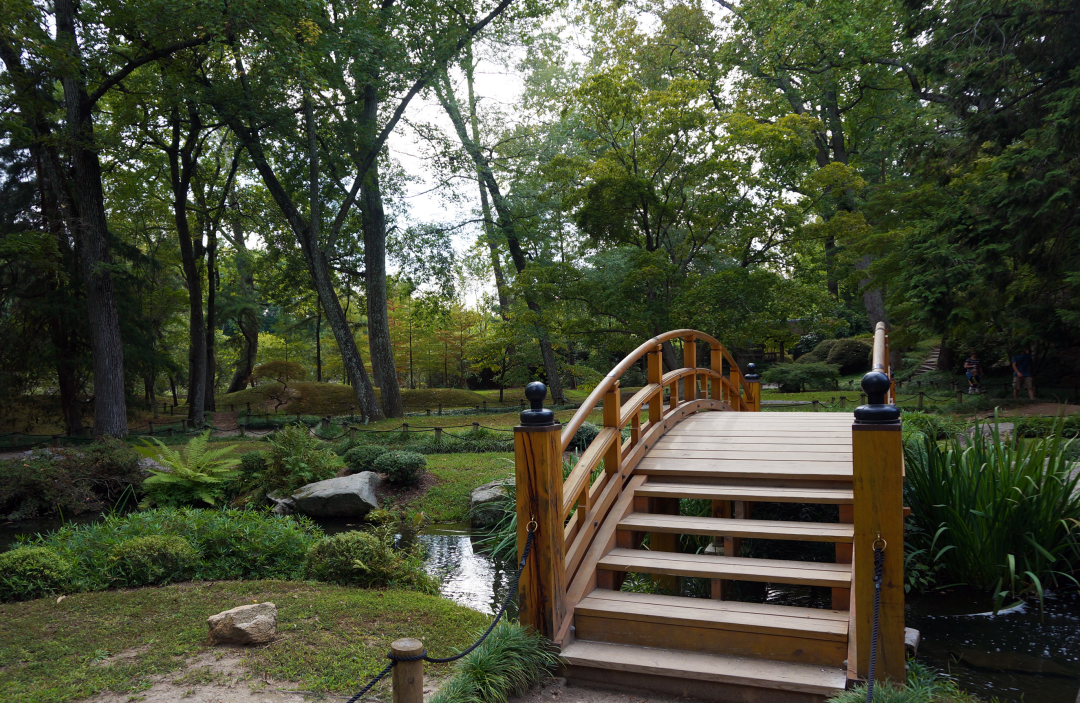 A study in contrasts: Jake vs. Heather in the Japanese Garden.

We met up with Tex again, who treated us to a fantastic dinner at Millie’s Diner.  The staff was friendly, the food was great, and the walls are adorned with creepy, steam-punk babies from a local artist.  All you can ask for in a meal, really.

What’s next:  Currently, we are in Albuquerque, New Mexico, where it is freaking freezing.  We’re going to head west to the Four Corners and the Grand Canyon as soon as we can defrost our RV.