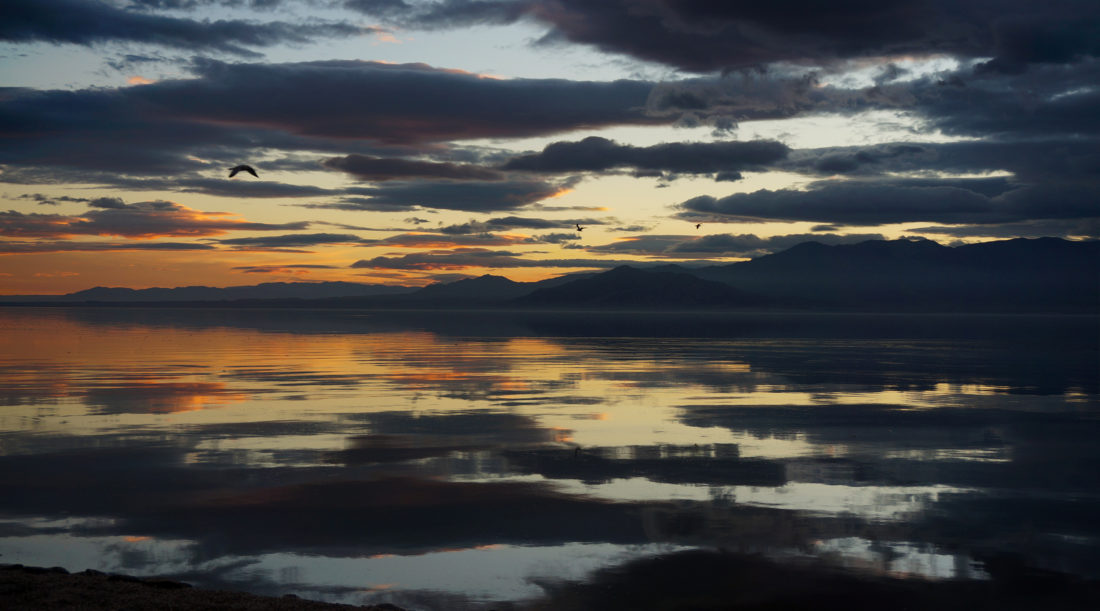 After camping out for three days at Elderly Burning Man, we headed west from Quartzsite into California.  Before we crossed over the border, we stopped to get some gas, because California’s gasoline taxes are insane.  At this time, in mid-January, gas in most of the country – including Arizona, but excluding the Northeast – was at around $1.70.  In California?  $2.60 if we were lucky.

So, we filled our RV’s 55 gallon tank to capacity and crossed over the border to the Golden State, our home for the next 2.5 months.  After a short distance, we turned south off the interstate, and drove through a narrow box canyon and past sprawling farmlands to our home for the next five days:  the Salton Sea.

The smell hit us almost immediately. 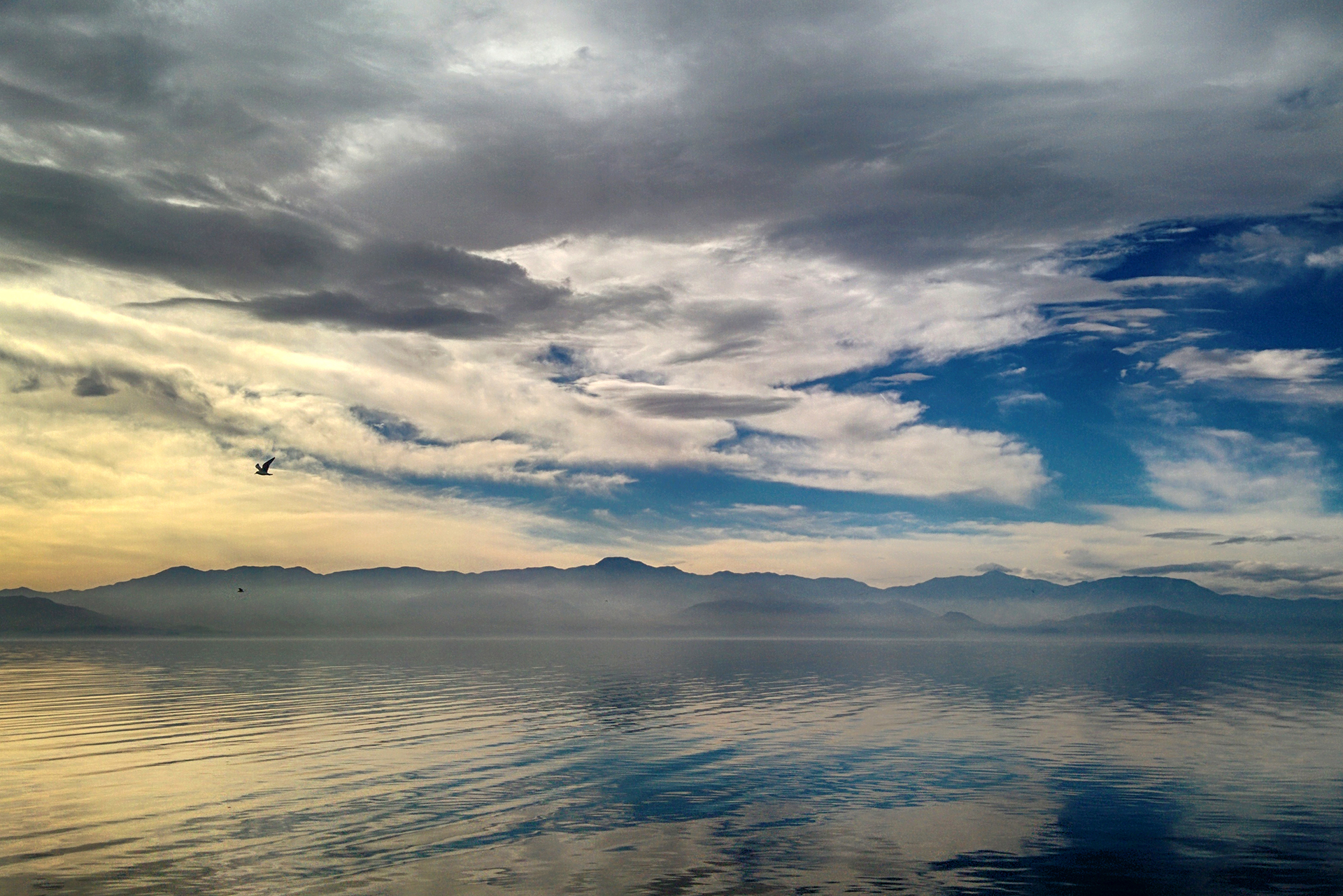 This Should Not Be

If you’re not from California, you probably have no idea what the Salton Sea is – we certainly didn’t.  The short answer is that it’s an ecological disaster, but the story of how it got that way is worth telling.

Let’s take a quick jaunt back in time.  In 1905, workers were attempting to cut an irrigation canal from the Colorado River into an extremely low-lying area of California, only 5 feet higher than Death Valley.  However, the canal was cut too deeply, and the water flow overwhelmed their ability to stop it.  The Colorado River poured into the valley for two years before the damage was repaired, and the resulting inflow formed the Salton Sea – California’s largest lake.

In the 1950’s, the Salton Sea was a popular tourist attraction for boating and fishing.  But the lake doesn’t receive enough new water to offset losses from evaporation, and it has been gradually shrinking for decades.  Today, because there is less water, the salt level of the lake has risen dramatically, as have levels of pesticides and other pollutants used by the nearby farming operations.  The Salton Sea is now saltier than the ocean, and the freshwater fish living in the lake are dying. 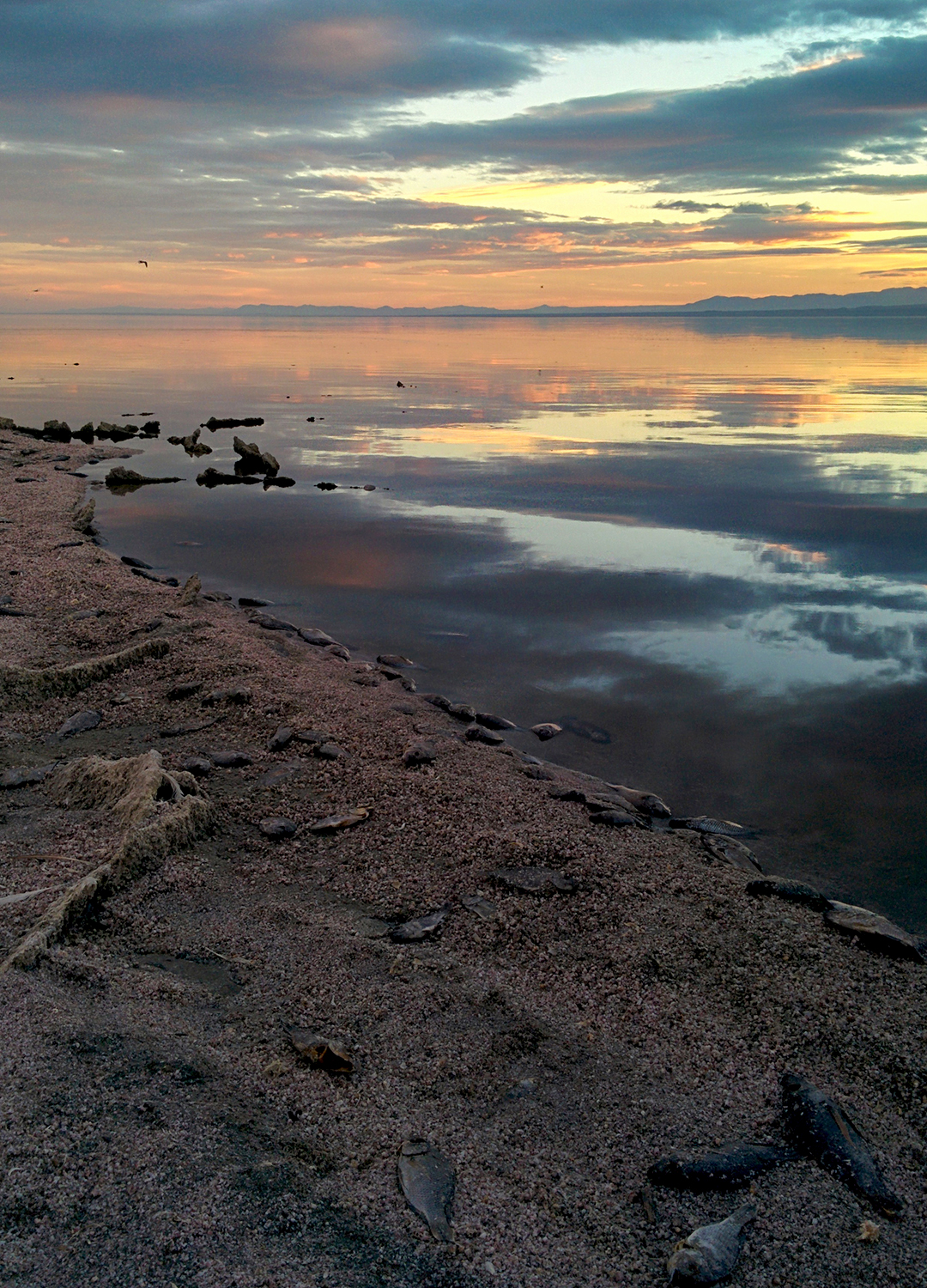 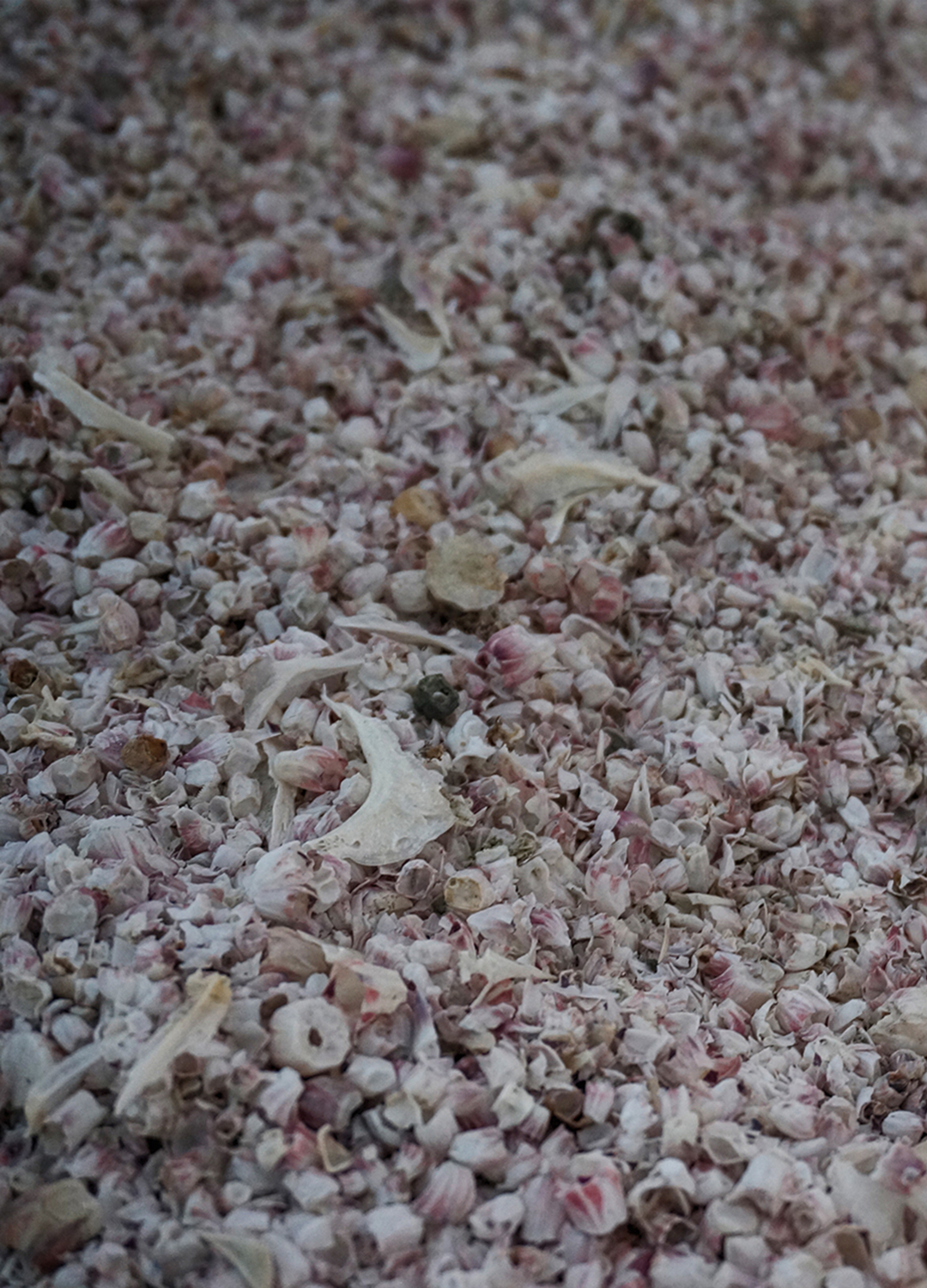 As we said, the Salton Sea is an ecological disaster.  The lake itself is surprisingly beautiful – the sunsets were some of the best we have seen, anywhere – but it is dying nonetheless.  The shore is lined with the rotting carcasses of dead fish, even at the state beach we were staying at.  From a distance, the beach looks like pristine white sand, but upon further investigation, you discover that it is composed of the bleached bones of fish and barnacles. And when the wind blows in off the water, the smell – oh, the smell! – can be totally overwhelming.  The resort towns from the 1950’s have become ghost towns.

That said, we couldn’t get a damn reservation anywhere else we wanted to go.  So we stayed by the Salton Sea, and closed our windows tight.

There were two areas we wanted to see near the Salton Sea, and the first was Joshua Tree National Park.  We’re going to give that one its own post, so we’ll tell you about the second:  Salvation Mountain, Slab City, and East Jesus.

Salvation Mountain is located east of the Salton Sea off a rough desert road, just beyond the edge of normal living.  It’s the product of decades of work by a local resident, Leonard Knight, who created it from adobe, straw, and thousands of gallons of brightly-colored paint (much of which was donated by visitors).  Basically, he built and painted a mountain with slogans about God and Love.  And he didn’t stop there – nearby buildings, vehicles, and even trees were all brought into the fold. 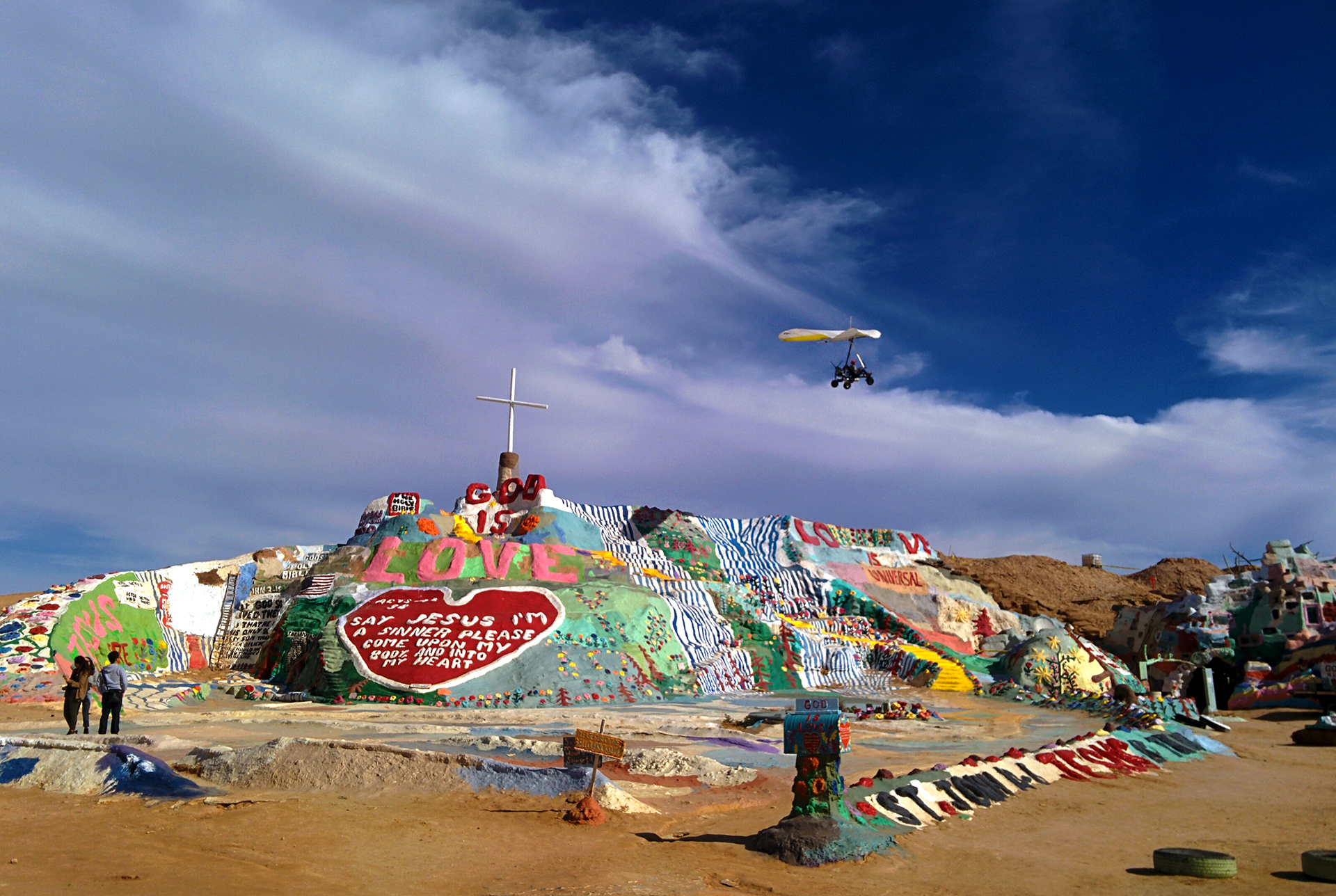 It’s like Dr. Seuss took a bunch of acid and created a bible study class. 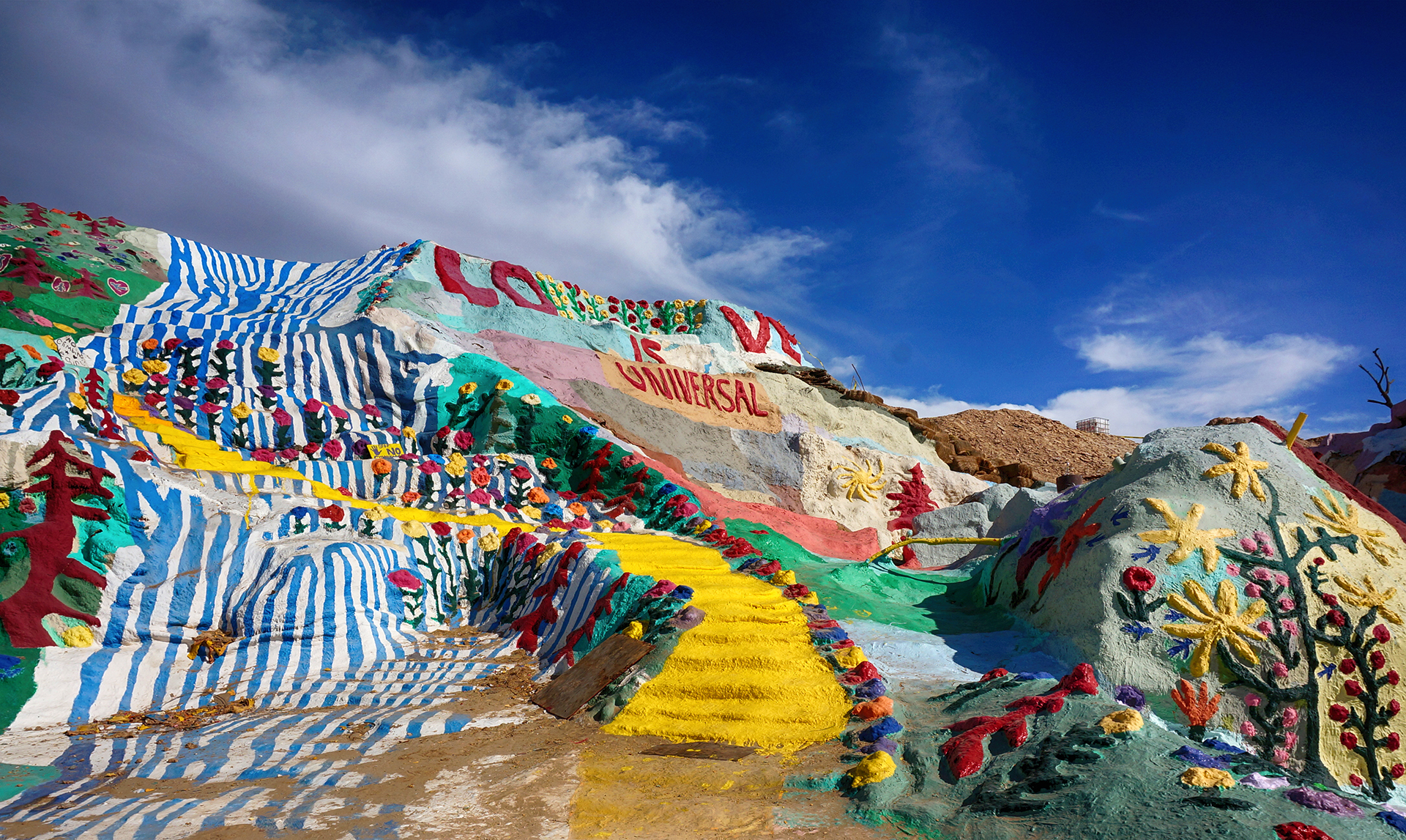 It’s an incredibly trippy place, a tourist attraction in its own right.  We saw at least two dozen other visitors while we were there, which is significant considering how far away it is from normal civilization.  Meanwhile, some sort of homemade flying contraption, basically a glider with a giant fan in the back, buzzed around overhead.  (If we hadn’t captured it on camera, we probably wouldn’t have believed it.)  And amidst all this surreality, a group of young women took approximately 1,000 duck-face selfies in front of the mountain.

Salvation Mountain is near, or part of (depending on where you draw the boundaries), a place called Slab City.  Basically, Slab City is our post-apocalyptic future.  The government demolished a military base here but left the foundations (the “slabs”), and people live on them in shacks, RVs, mobile homes, converted buses, and anything else with a roof.  It felt like a permanent continuation of the winter-only Quartzsite, only much more on the fringe.  Slab City is a world with no government or services, only what you can build or make use of. 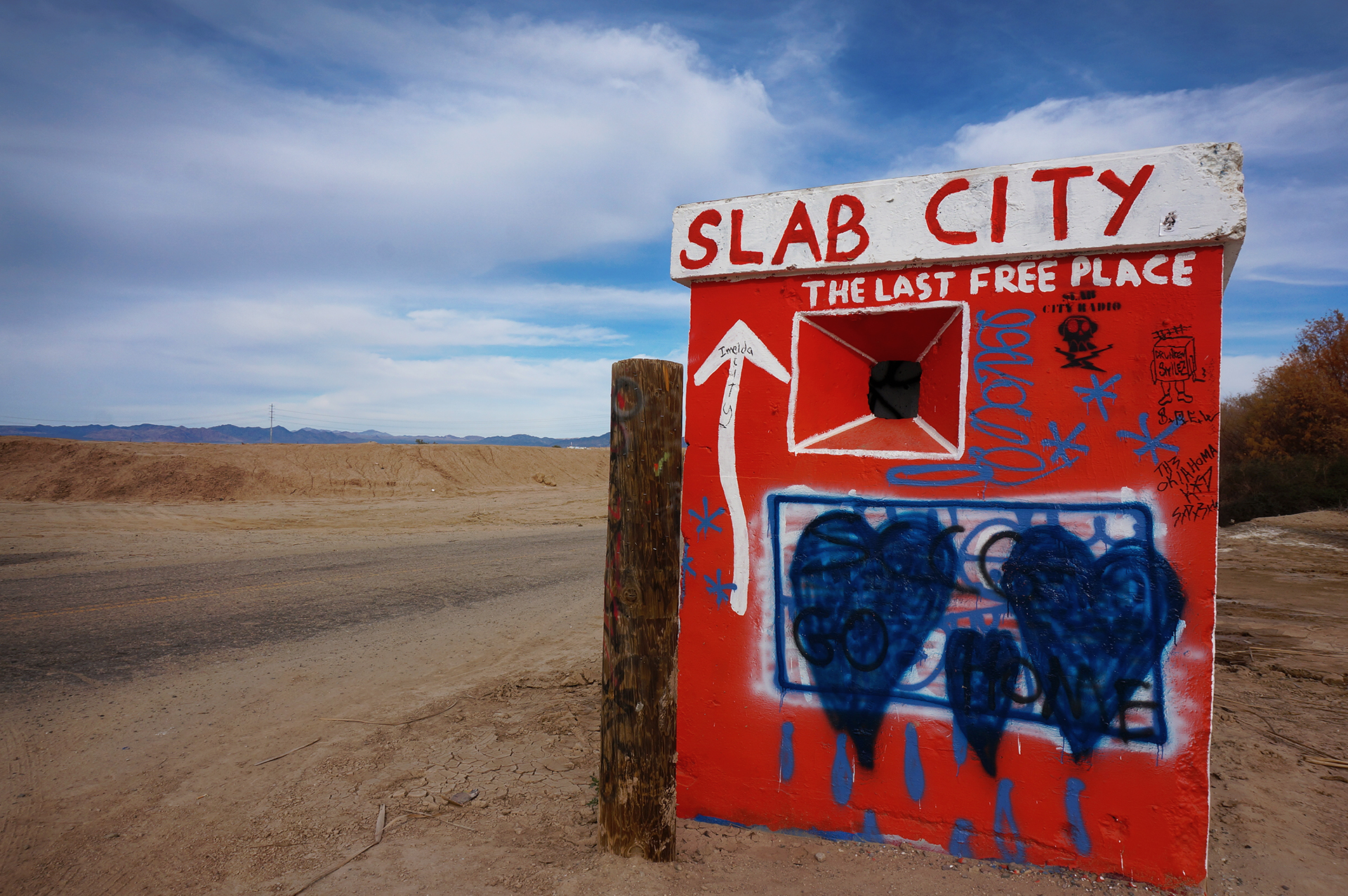 To be honest, it was kind of cool.  This is where people come to live when they no longer want to live in civilization, but civilization persists nonetheless.  There are multiple give-a-book, take-a-book type libraries, and certainly a lot of solar panels.  That said, it’s also pretty trashy, with fences made from tires and beer cans, and drunken / stoned drifters wandering around and yelling in the middle of the day.

We didn’t feel unsafe – everyone keeps to themselves, really – but we didn’t exactly linger.  Instead, we drove through the “town” and around a few bends (thanks, Google Maps!) until we came to an artists’ enclave known as “East Jesus.”  It’s a crazy sculpture park made of repurposed items, and it was really freaking awesome. 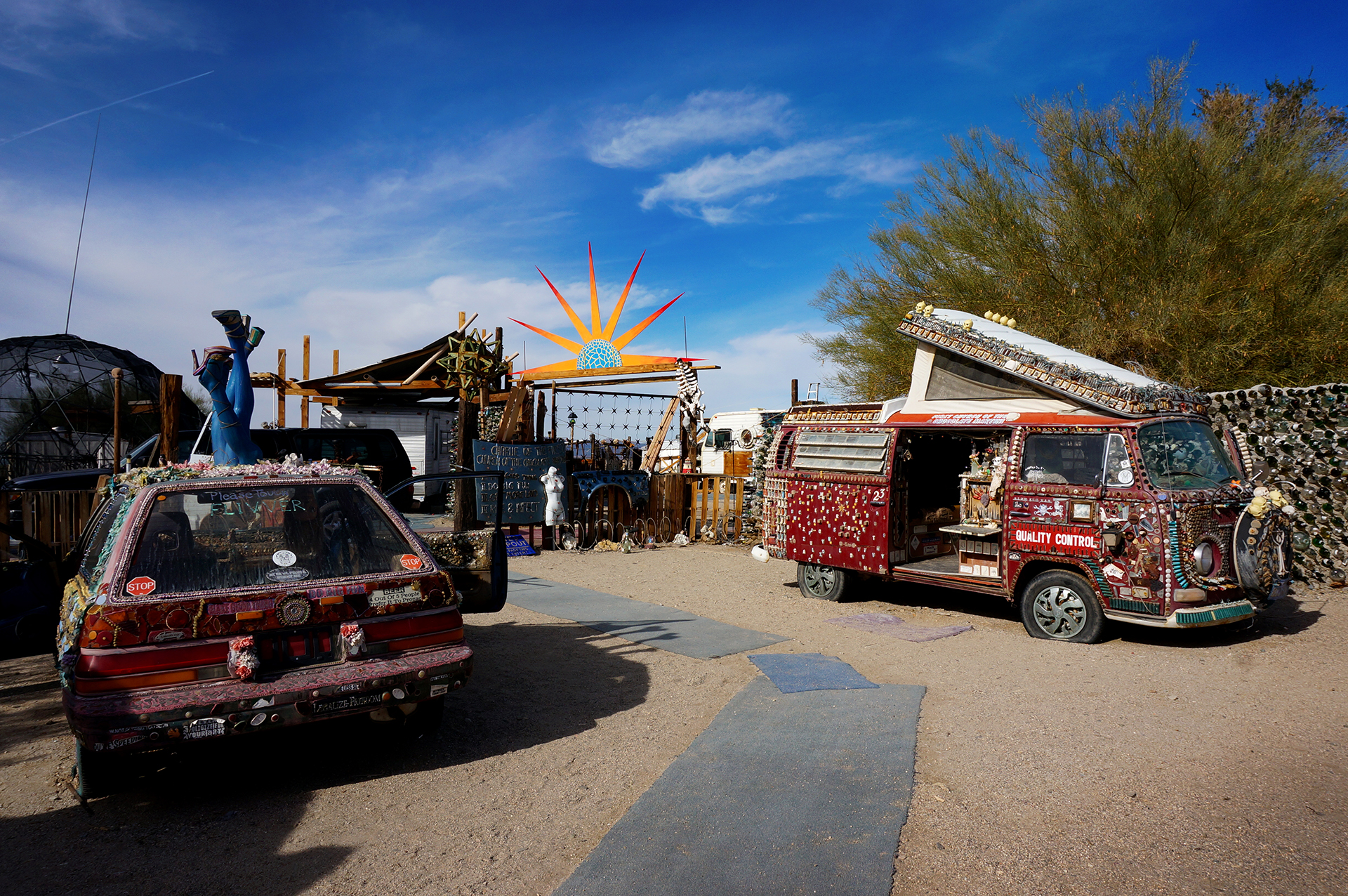 East Jesus is not very large, but there are endless things to see.  An elephant made from tires and sewer hoses?  Check. 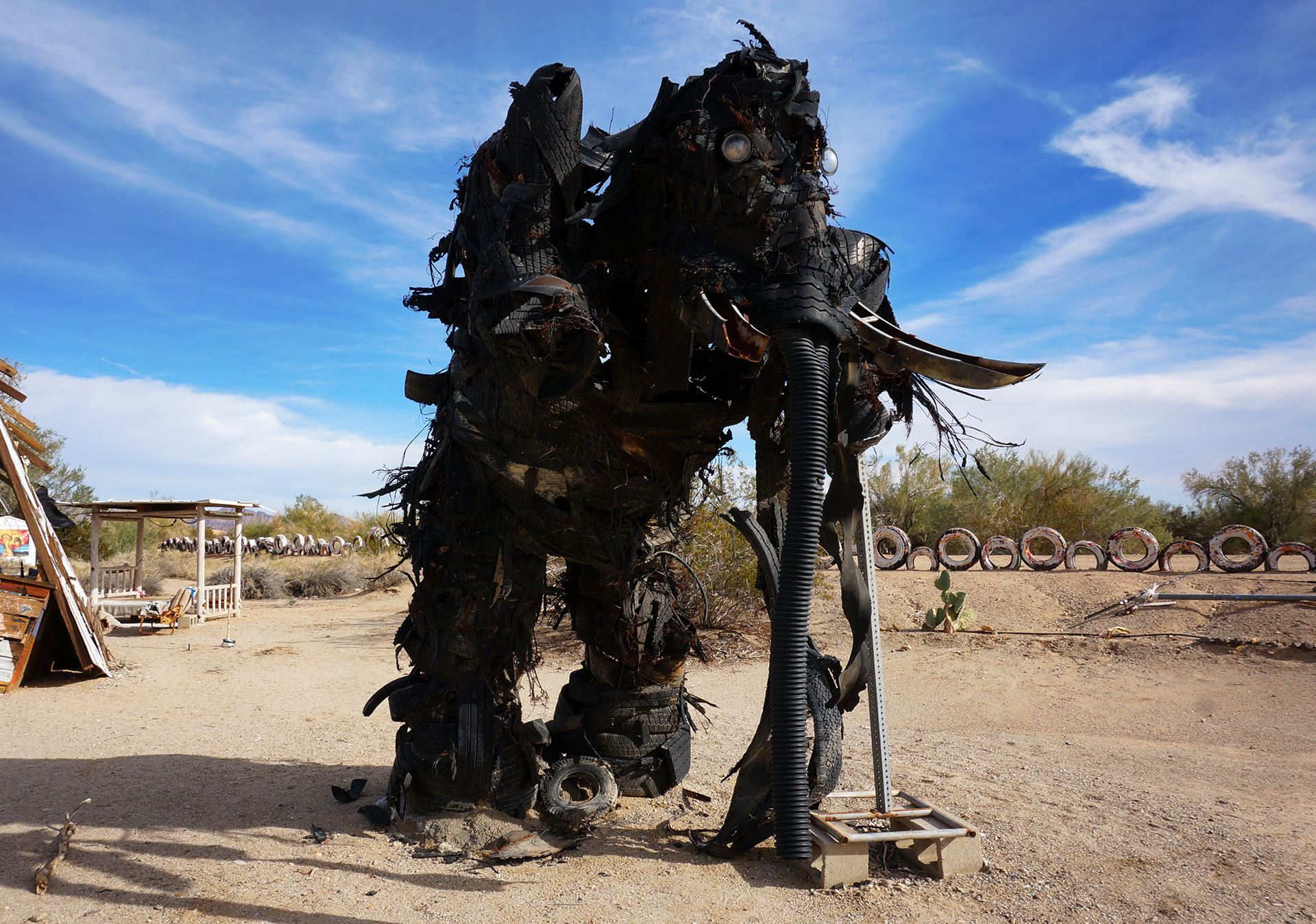 Alligator made out of… something?  Check. 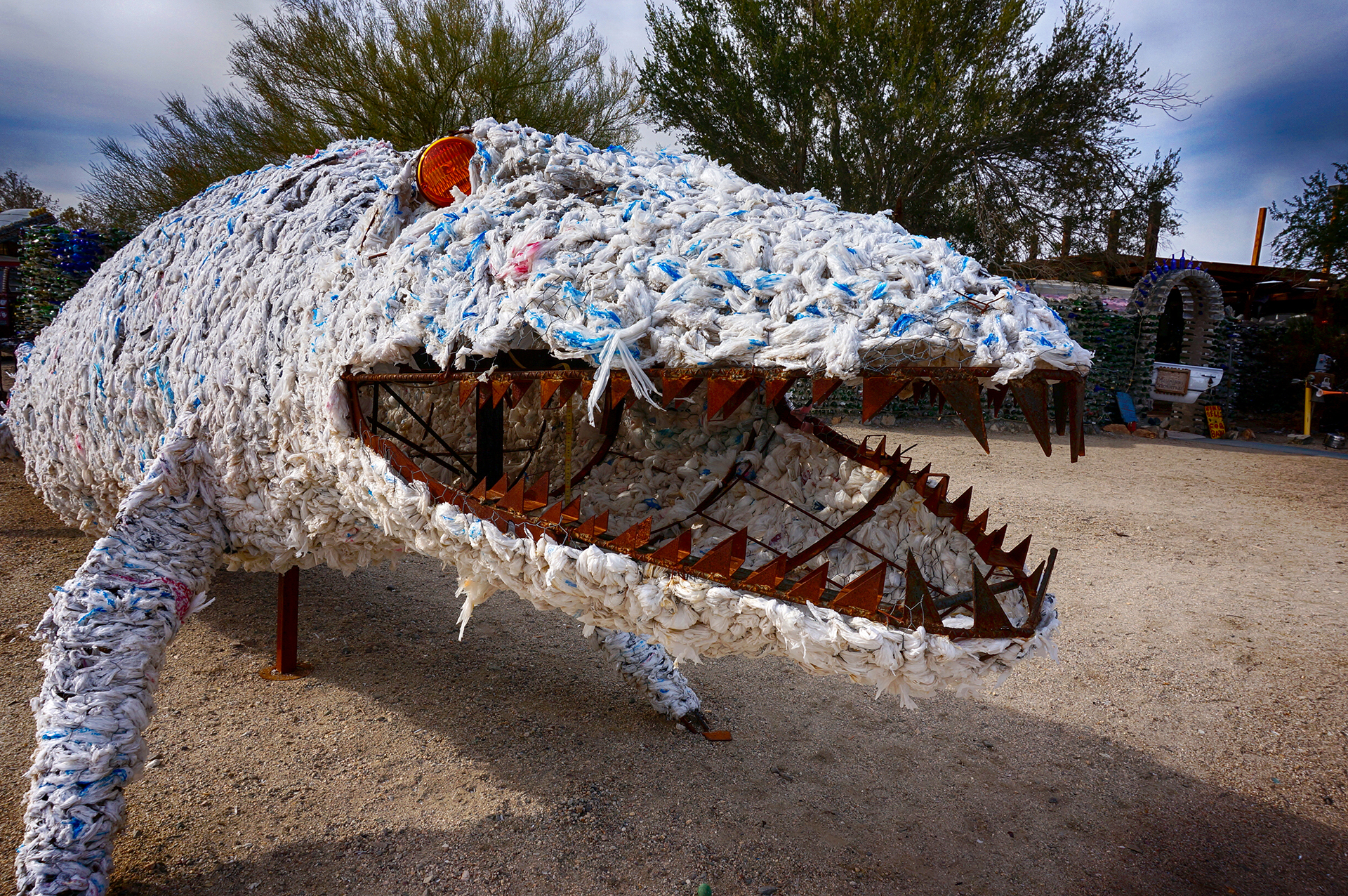 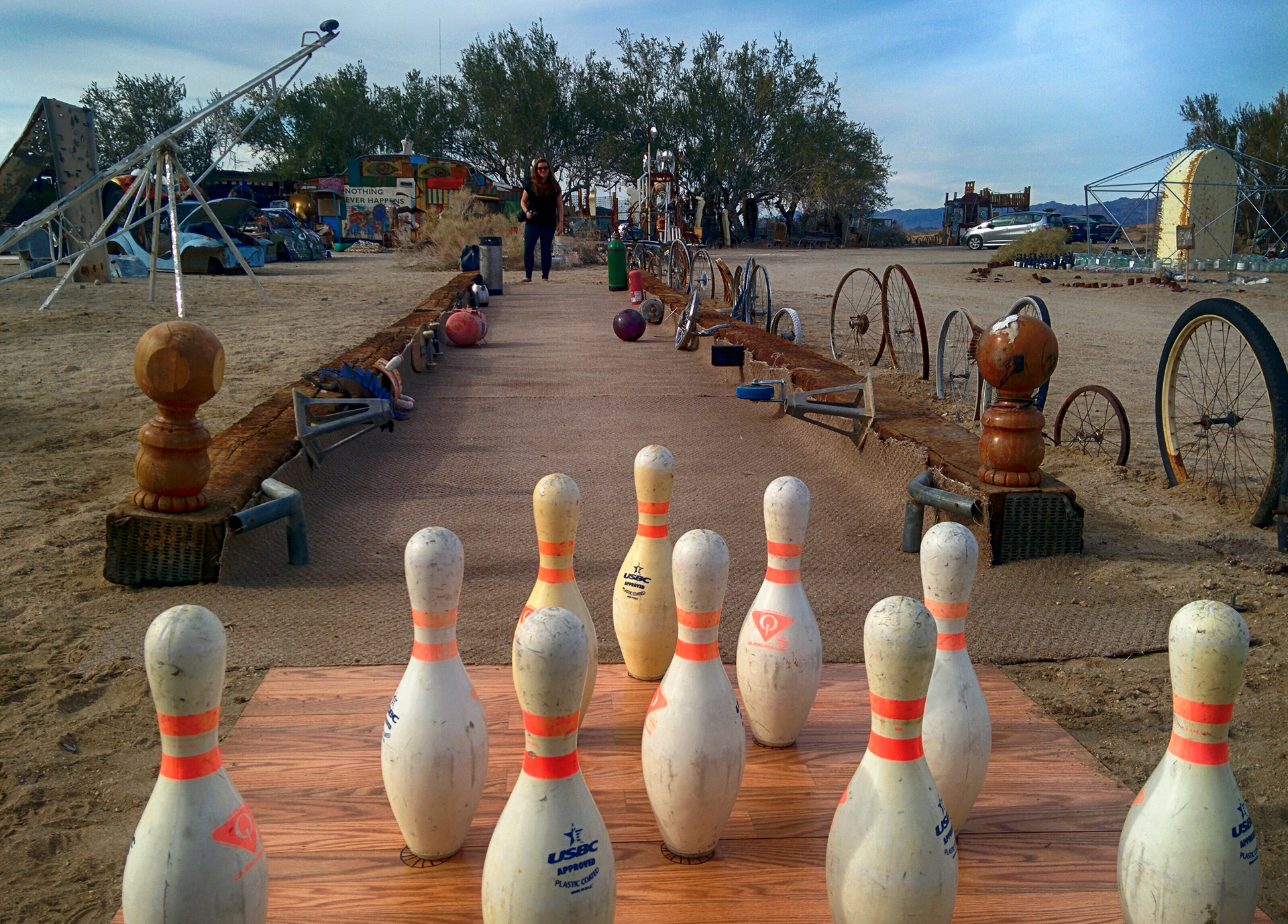 Random propaganda against dolphins (“whose team are they on, anyway”)?  Check.

A wall of TVs with satirical slogans painted on them?  That’s a big check. 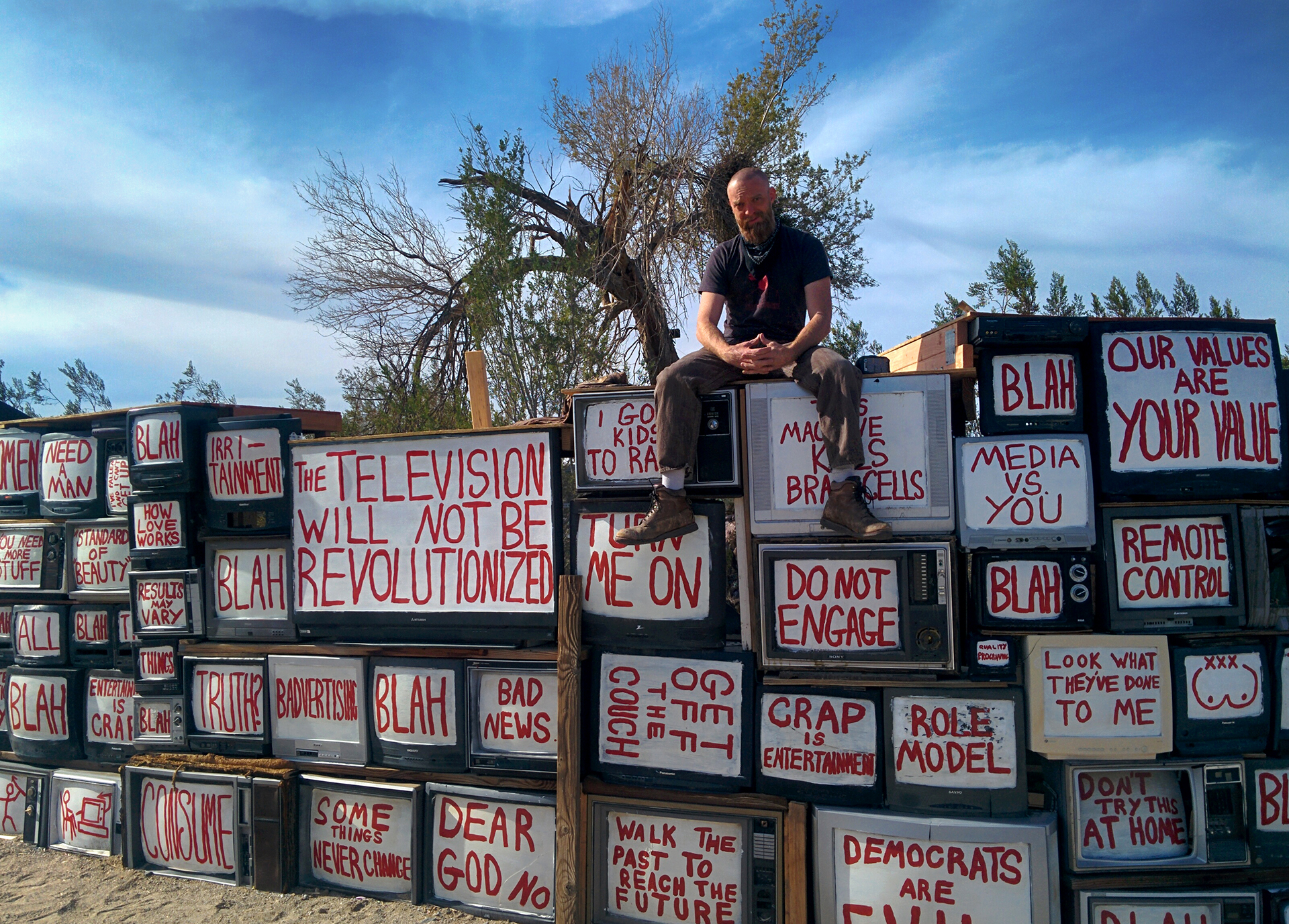 The TV wall was actually the reason we came to East Jesus, after seeing pictures posted on social media by some of our new friends from Quartzsite.  The wall is really cool in person (and fun to photograph), but even better, the creator was there when we were, working on adding another layer on top.  He was very friendly, and quite sane – he’s a photographer by trade, with a great Instagram feed – and said we were actually one of the very few to have met him here.

After chatting for a bit, we left him to his building and drilling (there’s a large wood frame back there) and finished making the rounds.  We’ve got a few more pictures below.  East Jesus is deeply weird and utterly whimsical, and one of our favorite places from this trip.

Where are you now?  Portland, Oregon, still getting our blog post on.

Next location?  Seattle and Vancouver!