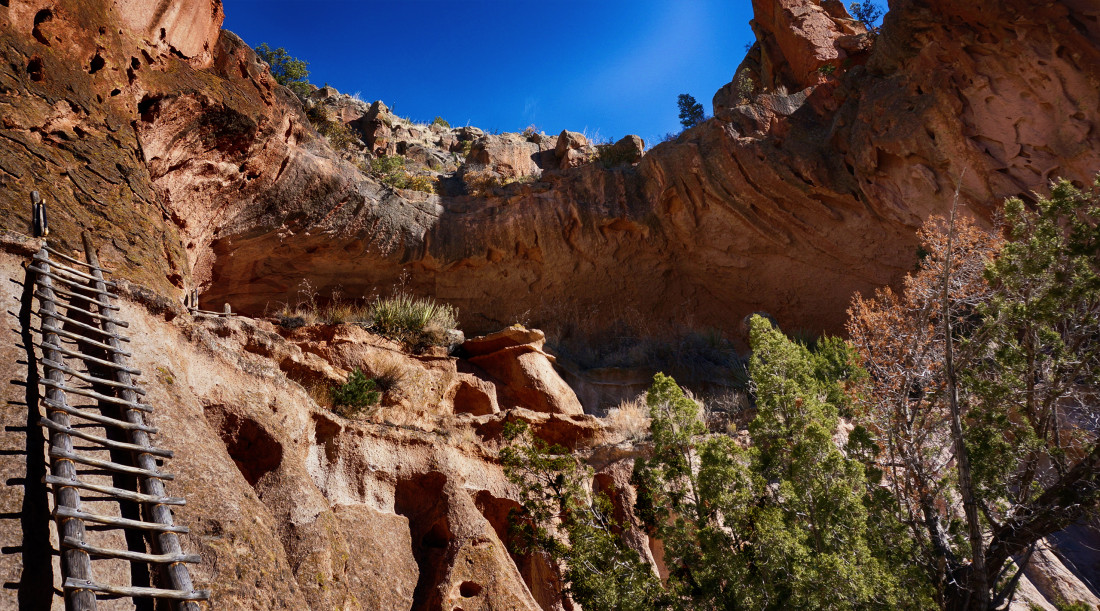 We left behind Truth and/or Consequences, and traveled north, to Al… Al…buquerque! We first spent the day shooting our holiday card photos in Elephant Butte State Park, so we didn’t make it into Albuquerque until nightfall.  This was when we learned the iron law of the high desert:  it gets really cold at night.

Hooking up our RV with gloves and a winter hat on, we suddenly realized:  we made a huge mistake.  The sunny, warm climate of El Paso was gone.  It was December in Albuquerque, and as we later discovered, Albuquerque is at a higher elevation than Denver.   The winter just got real.

The Wrong Amount of Sun

The days were still warm, but night came to our little metal box with a vengeance.  Freezing our butts off is definitely not what we expected out of New Mexico, land of sand dunes and chili peppers.  To make matters worse, we were parked west of the city, and the short winter days meant the sun was constantly setting into our eyes as we drove home.

For whatever reason, Albuquerque’s highways are designed so this is especially brutal.  It’s a lot of staring straight into the sun, but we have to say, the long highway curves that bring you from dim light into blinding death at high speed are a particularly nice touch.  We thought we had escaped winter this year by fleeing to the Southwest – but we didn’t flee far enough.

It constantly put us in mind of this classic Simpsons quote:  “Ever since the beginning of time, man has yearned to destroy the sun!”

Oh well, no use crying over spilt milk, even if the milk was probably spilled due to being blinded by the goddamn Albuquerque sun.  Now, let’s put aside our seasonal rage and move on to the good stuff.  Luckily, there was a lot of that too!

After seeing the Gila Cliff Dwellings, which were cool but not life-changing, we found ourselves wanting more.  Continuing on the Native American theme, we stopped to see petroglyphs in Albuquerque.  Petroglyph National Monument is in a volcanic crater literally surrounded by the suburbs, but somehow it was awesome.  If you like petroglyphs, this is the mother lode – there are more than 20,000 in this area!

We don’t have a picture, but one looks just like a bullseye, despite being created more than 400 years ago.   In more modern times, someone added a bullet hole to it.

We also drove north/northeast from Albuquerque into the mountains, past Los Alamos, the government research lab that designed the atomic bomb.  The lab is still in operation, and with all the apparently-rich scientists (?), the houses in the town of Los Alamos were conspicuously nice (let alone the super contemporary visitor center).  Sidenote: We were on to something; according to Wikipedia, “Los Alamos has the highest millionaire concentration of any US city with 12.4 percent of households having at least $1 million in assets.”

We kept moving, and after the requisite switchbacking, we arrived at Bandelier National Monument.  It’s located in pristine forest wilderness, minus the occasional Los Alamos satellite dish or two, and features a beautiful rocky cliff face with numerous round dwelling spaces inside.  These were smaller than the town-sized rooms at Gila, more like large storage areas, which is basically what they were.  Occupied by the Pueblo people, there is evidence of human habitation at Bandelier from as long as 10,000 years ago.

The iconic National Park Service images of Bandelier always show the ladders.  Well, we climbed them in real life.  The biggest ladders lead to the largest and highest alcove, are definitely not recommended for those scared of heights, and are very, very cool. 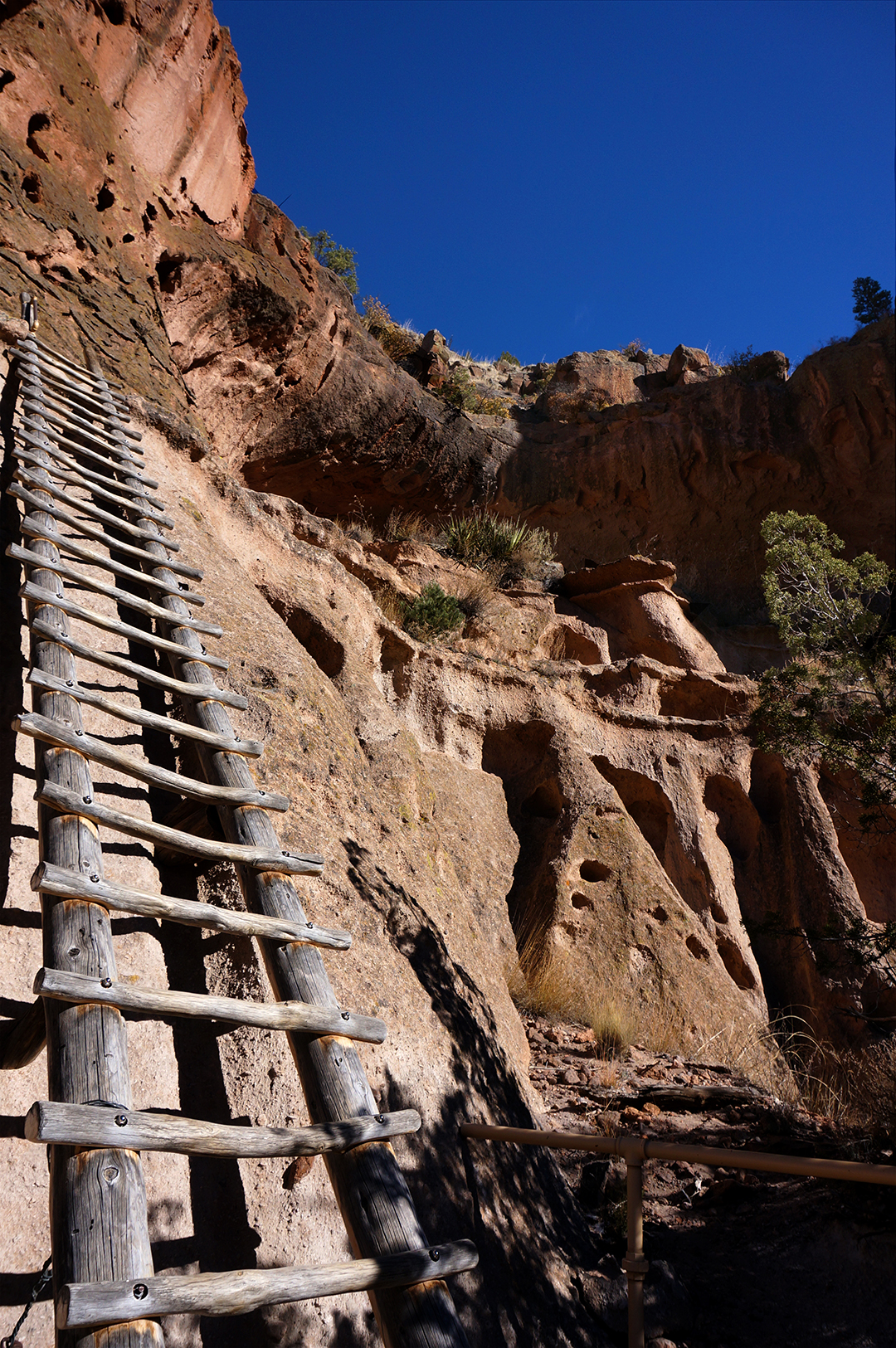 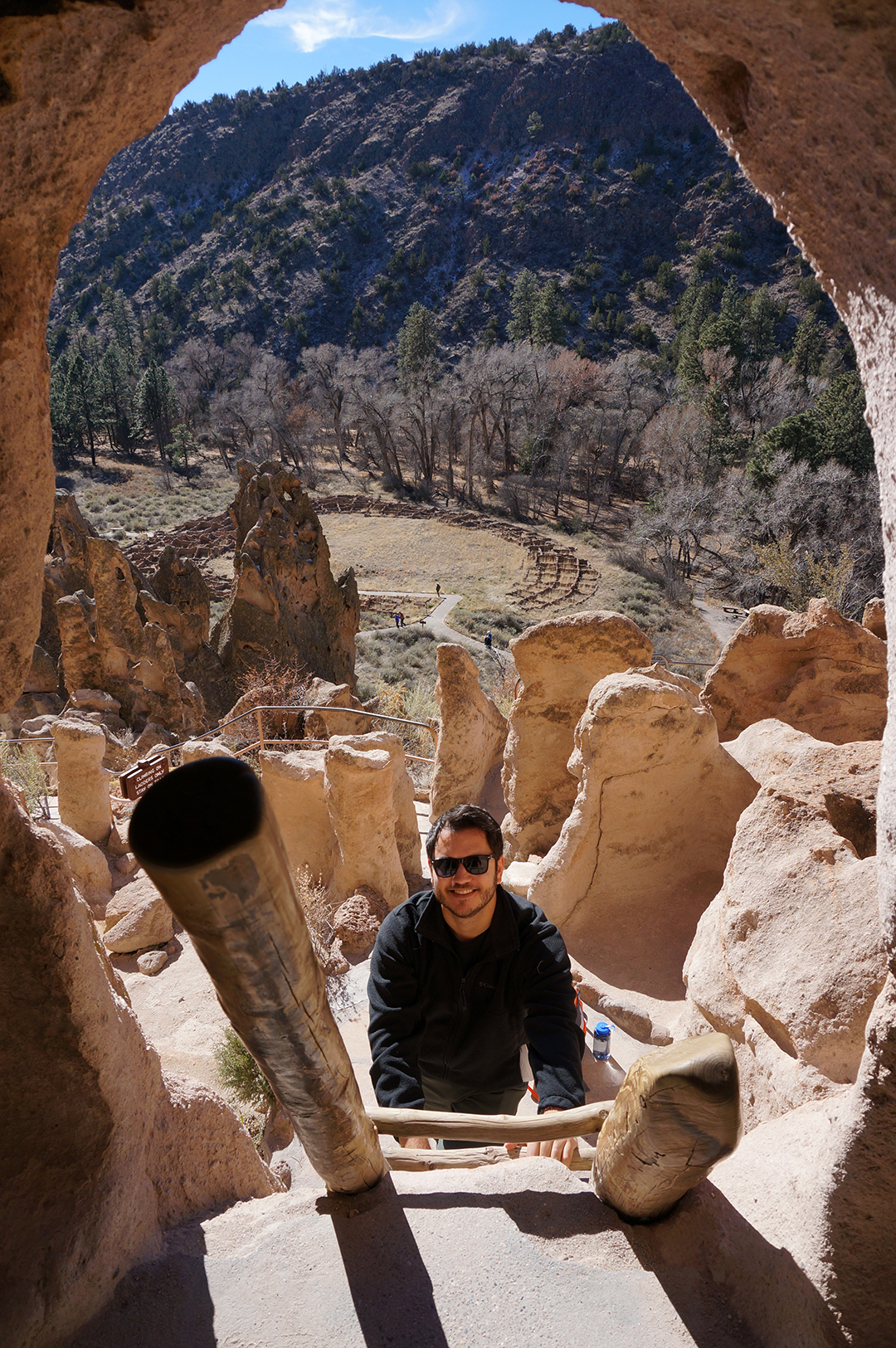 A hidden treasure, the slot canyon trail at the Kasha-Katuwe Tent Rocks was one of our favorites hikes of all time.  The trail winds through a long, narrow slot canyon, shrinking and growing continuously.  It was our first experience in a true slot canyon, and we loved it. 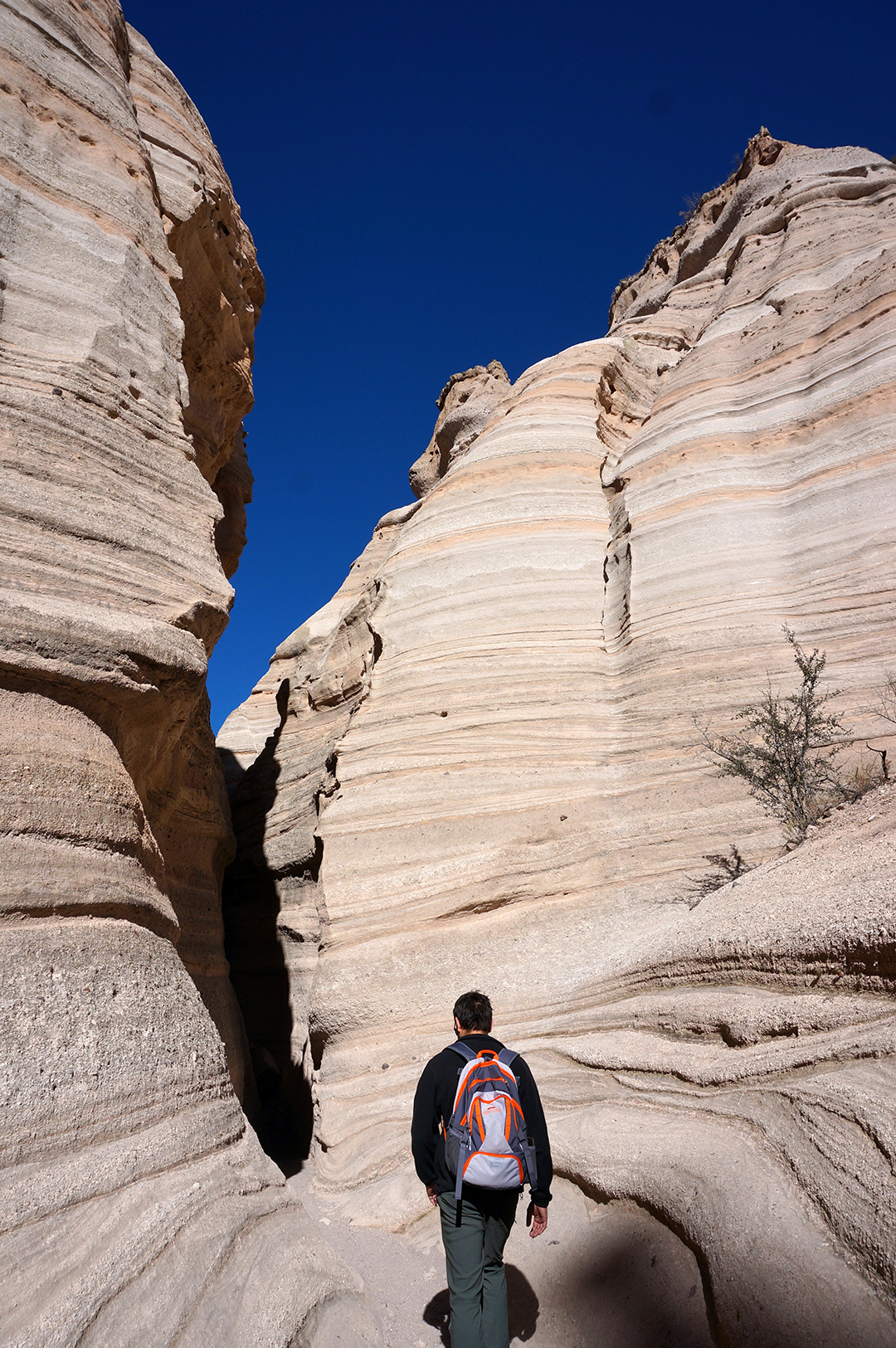 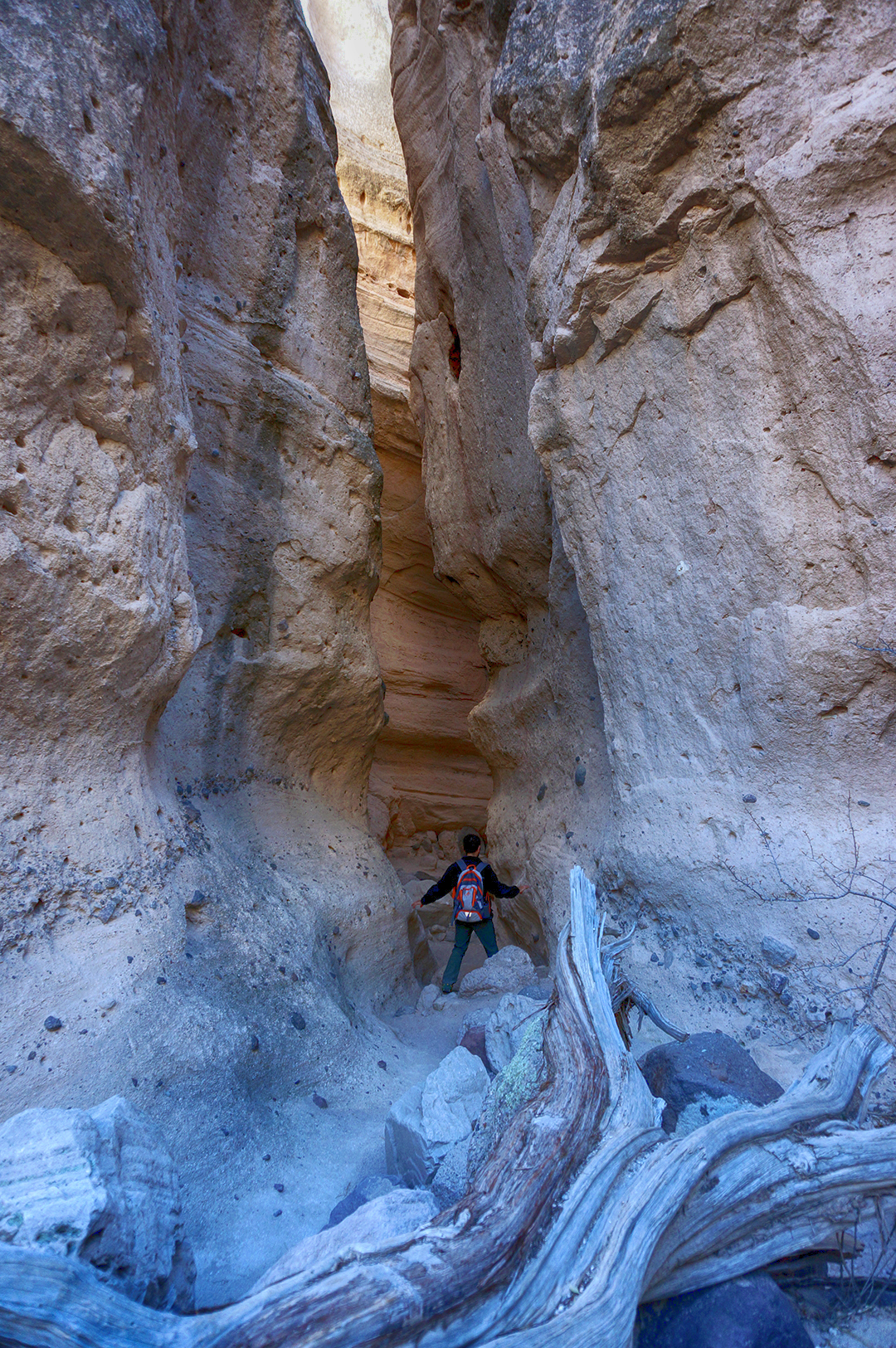 After traversing the canyon, we climbed steeply up to an overlook of the canyon and the eponymous tent rocks.  These rocks (also called “hoodoos”) are eroded away by wind in unusual formations, here forming large pyramid shapes that do look a little like tents.  (Some also seem, um, anatomical.)  It weathers this way because compared to the rest of the pillar, the rock on top is extra hard.  (No comment.) 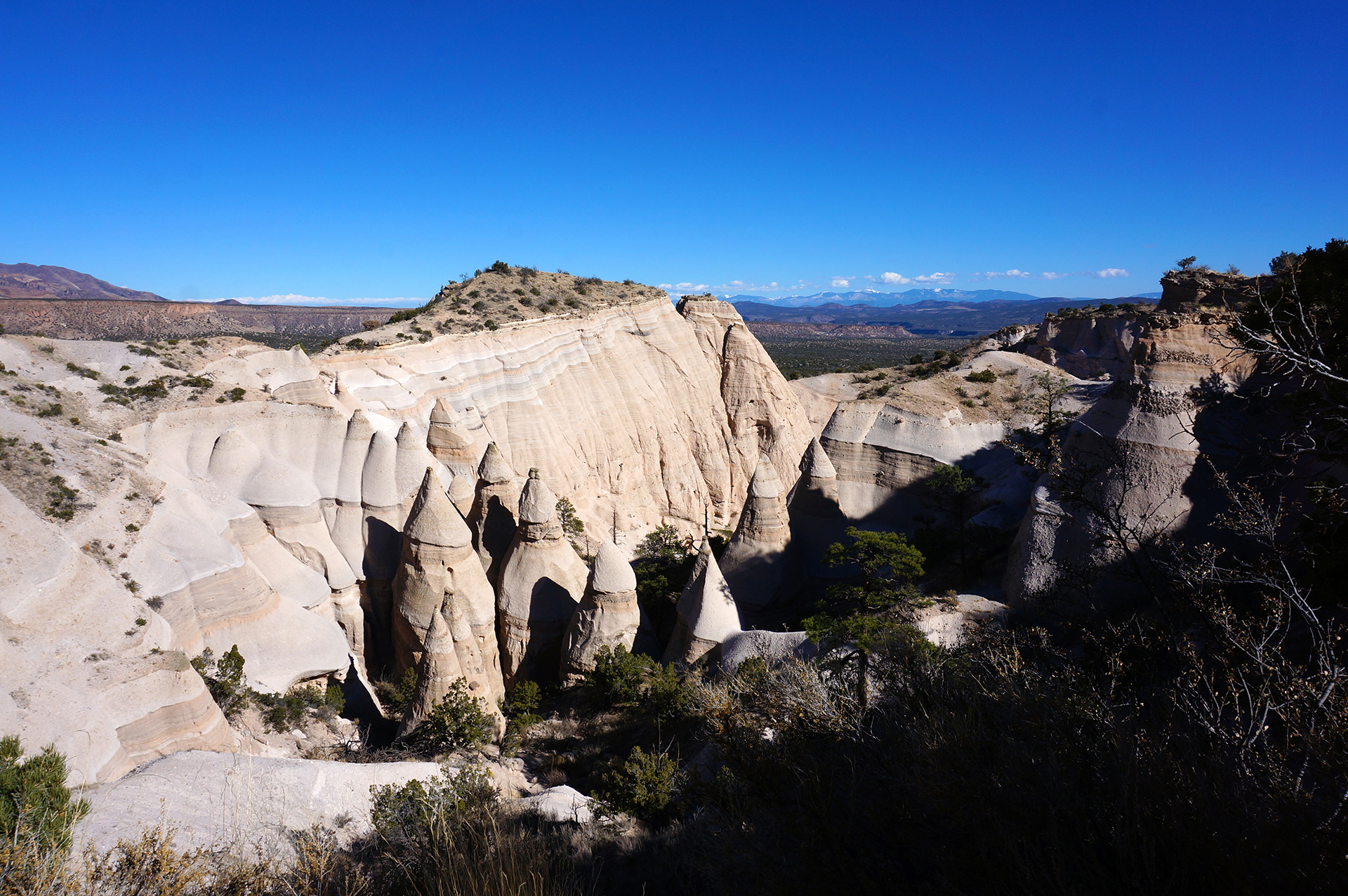 We really enjoyed the hike.  The tent rocks and the beautiful view were the cherry on top after the trip through the slot canyon.  Definitely a good one!

A Tale of Two Cities

All of our Albuquerque adventures (save the one below) were nature-related, because there wasn’t a ton going on in the city.  Everyone lives outside of the urban core, so when we went downtown on the weekend, it was deserted – hardly anything was even open.  We then tried to visit the touristy shopping area, but a parade blocked every possible path between there and us.  Sometimes, you just have to listen to the universe and let it go.

An hour away from Albuquerque, Santa Fe had a lot more going on, even though its population is much smaller.  Santa Fe is very old, and very pretty, with all the houses in an adobe Pueblo-style.  And it’s got a lot of culture:  there is an entire, very nifty, street of art galleries.

We drove around for a bit and had a semi-famous green chile cheeseburger (New Mexico is famous for its red and green chiles).  We can confirm, it was mouth-wateringly worthy. 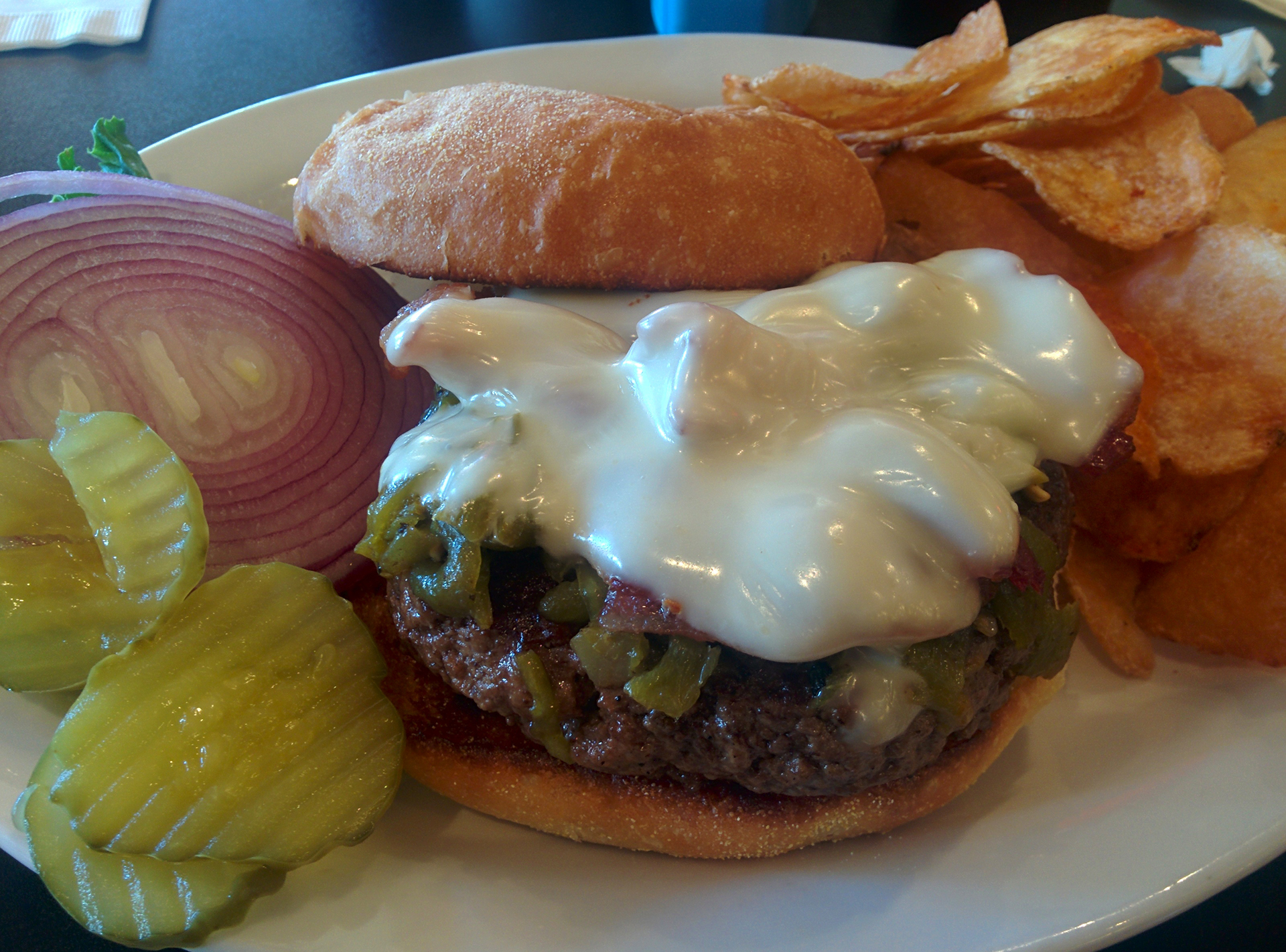 Honestly, we really liked Santa Fe, but it’s not the kind of place we would ever move to – the elevation effect is just too much.  What’s the elevation, you ask?  Oh, just a little ways up:  7,200 feet!

Found on Yelp, the National Museum of Nuclear Science & History was surprisingly great.  It had a huge amount of information on the U.S. and world nuclear programs, including numerous artifacts.  A lot of it related to the Manhattan project and the incredible effort taken to build the first nuclear bombs.  The resource uses were mind-blowing.

There were also replicas of the two atomic bombs dropped on Japan, along with a fair and haunting exhibit showing the devastation they caused when they exploded.  Sad all around.  But after that, things got more cheerful, as we headed outside to check out their large display of combat aircraft.

The best part is that the New Mexico airplane identifier is the “Tacos.”  Amazing. 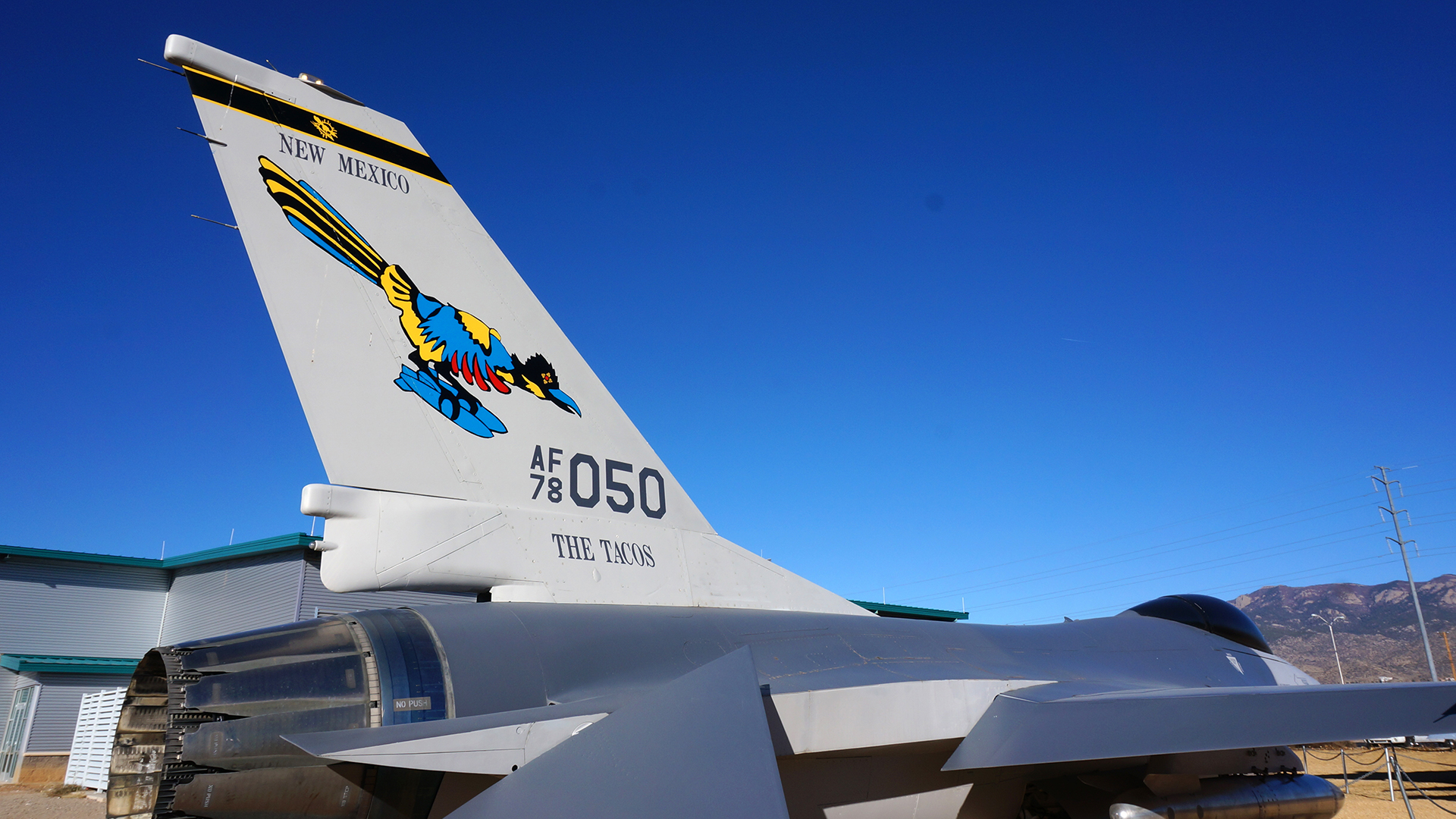 There were also a lot of exhibits dedicated to the dawning of the Atomic Age and its place in pop culture (including the Simpsons!).  Lots of good, extremely cheesy stuff in here.  Our personal favorites, both funny and sad, were the numerous consumer items created from or containing uranium or radium, due to the purported health benefits.

As it turned out the “benefit” was radiation poisoning.  Oops! 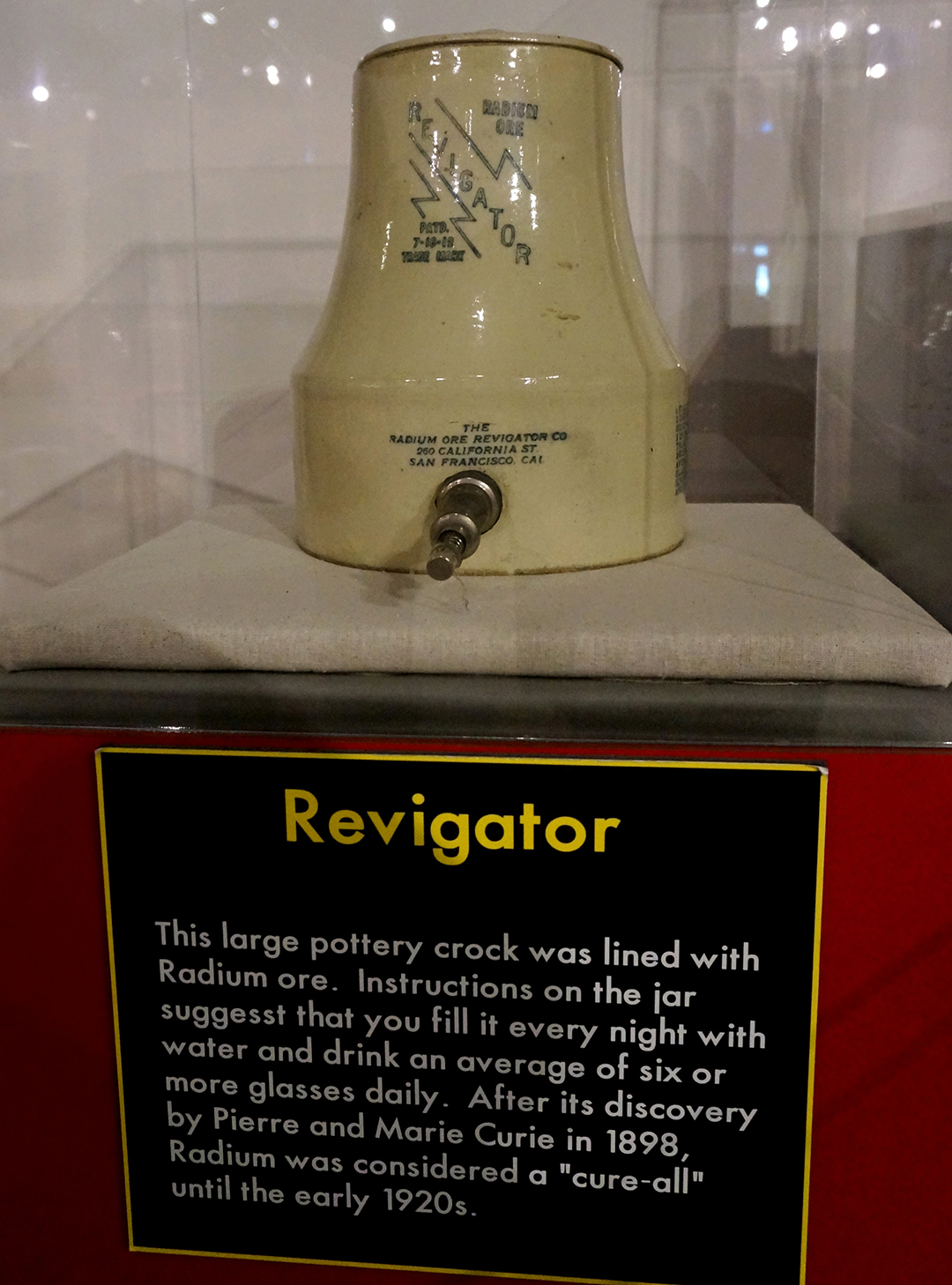 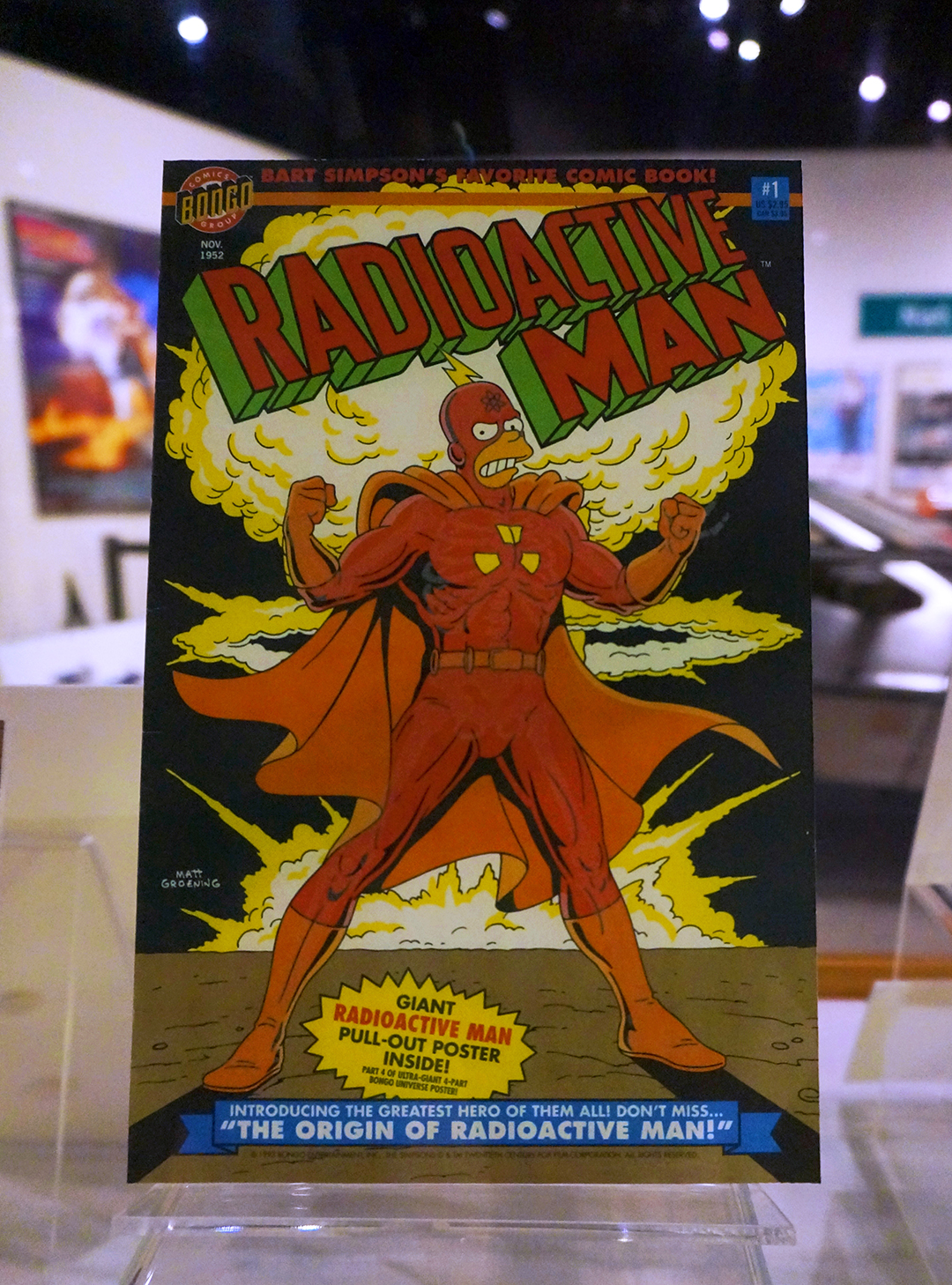 Where are you now?  Napa, California.  Drinky drinky!

Next location?  Somewhere northwest of here, probably Arcata or Eureka, CA, to see more redwoods and do a little maintenance on our car and RV.